Terrorism in Israel in Perspective 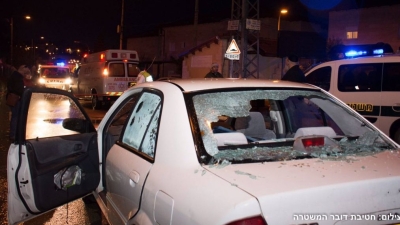 The news the past few days has been horrifying. A mother of six children, a nurse, fatally stabbed in the doorway of her own home. Another woman, 18 weeks pregnant, knifed.

And these terror attacks follow scores of more shootings, car rammings and stabbings over the past four months at bus stops, in bars, and on street corners in Jerusalem, Tel Aviv, Afula, and elsewhere.

I would not assert that the world perennially ignores Israeli victims and downplays terrorism directed at Israelis. Just this week, reacting to the heinous murder of Dafna Meir and the attack on Michal Froman, U.S. officials called the attacks “barbaric” and said they were “appalled’ by these acts of terror.

Yet, one can’t deny that this ongoing wave of terrorism targeting Israeli civilians has gotten short shrift internationally. Recent media overviews of terrorist attacks appropriately list incidents in Paris, Burkina Faso, San Bernardino, Baghdad, Istanbul, and Nigeria. But it’s impossible not to notice that almost all such lists omit mention of those in Israel. This tolerance of terrorism against Israelis risks making it acceptable, and it must end.

Let’s put this violence into perspective. According to the IDF, since September 13, 2015, there have been 110 stabbings, 38 shootings and 22 car rammings, for a total of 167 terrorist attacks.  That’s an average of 1.2 attacks every day for the last 19 weeks. Even more horrifying, according to statistics from Magen David Adom, 29 people have been killed in terror attacks. With a per-capita adjustment, that’s the equivalent of 1,131 Americans killed by terrorists in the last four months. While there have been some new stories on the violence, there have been numerous headlines proclaiming “Palestinian killed” while only noting below that the individual had been killed in an effort literally to prevent them from stabbing Israelis on a street corner.

Can you imagine the outrage if that many Americans were killed by terror, or if Swedes were attacked by terrorists every single day for months?

To what can this muted response be attributed?  Certainly, there are some differences between the current terrorism afflicting Israel and the nature of the attacks in Paris or Nigeria. The perpetrators attacking Israeli civilians appear to be targeting Israelis alone, killing them simply for the fact that they are Israeli. In contrast, terrorists in Paris or San Bernardino appear to have been motivated to kill random individuals with the goal of expanding the threat and impact of the Islamic State.

But there’s more there. The reality is that, after decades of a prolonged Israeli-Palestinian conflict, the world has become accustomed to Israeli victims of terrorist violence in a way that simply is not the case when it comes to innocents in Paris or London or New York. The world sees itself as unconnected and fundamentally un-threatened when the victim is an Israeli and the perpetrator a Palestinian.

Moreover, while nearly all observers abhor such violence, they don’t react with the same emotion induced by other acts of terrorism because of an underlying sense that the violence is caused and even provoked by Israeli actions such as the ongoing occupation of the West Bank. Observers seem to believe that this is not a black and white situation that can be reduced to victim and perpetrator.

But that is exactly what it is.

A benign tolerance of violence against Israelis is intolerable. Terrorism is never justified, no matter the reason. Simply put, one can seek to right a wrong, but murdering people because of their nationality is always wrong. Moreover, the failure to condemn such atrocity inevitably haunts those who stand idly by.

The security crisis in Israel has gone on too long with too little outrage.  We owe it to all of them -- Dafna and Michal, along with Naama and Eitam Henkin; Richard Lakin, Yaakov Litman and his son Netanel, and Ezra Schwartz, and many, many, more.

For them and for ourselves, it is our responsibility to ensure that there is vocal outrage at terrorism of any sort and strong support for the Israeli civilians who face this never-ending threat.