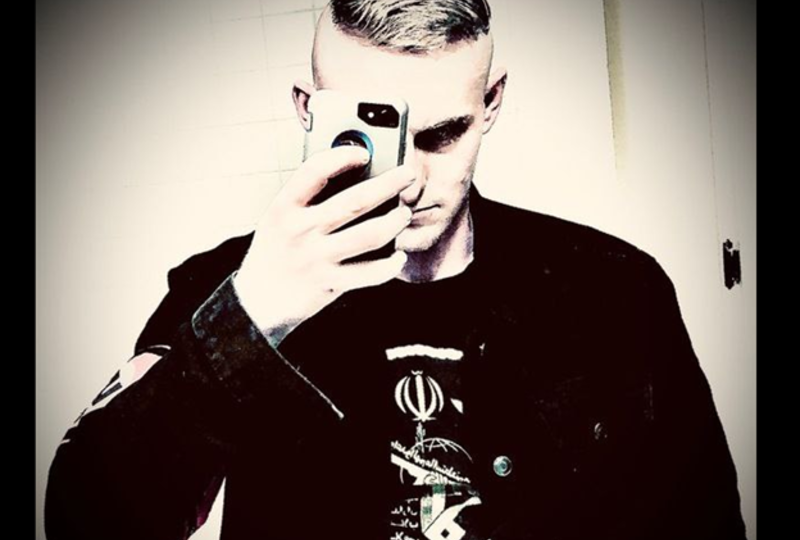 On May 28, 2021, Texas authorities arrested Coleman Thomas Blevins of Kerrville after he allegedly threatened to carry out a mass shooting at an area Walmart. Blevins was charged with making a terroristic threat to create public fear of serious bodily injury. He appears to embrace a convoluted extremist ideology that includes elements of white supremacy, misogyny and Islamist extremism.

Following Blevins’ arrest, investigators executed a search warrant and allegedly seized firearms, ammunition, flags and books from his home, including white supremacist favorites The Turner Diaries, Revolt Against the Modern World and Harassment Architecture. The divergent collection of seized items also includes a Quran and flag of the Kingdom of Saudi Arabia.

Blevins appears to have posted to the “InJekt Division” Telegram channel using variations of the screen name Korb or Kørbe and is connected to the channel in several ways. As VICE News reported, a t-shirt featuring the channel’s logo (a syringe inside a Waffen-SS Division shield) is visible in a photo of the items allegedly seized from Blevins’ home. VICE also noted that a man using the name Korb was described as the president of InJekt Division during a far-right podcast.

In fact, there are many photos posted in the channel of an individual that appears to be Blevins using variations of the name Korb. Since his arrest, other channel users have made “FreeKorb” posts accompanied by Blevins’ booking photo and previously posted photos of Korb. 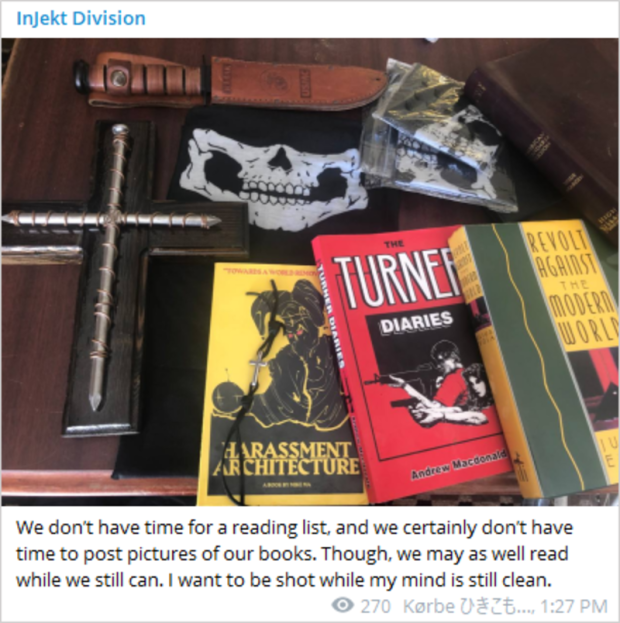 Like the collection of flags and books allegedly seized from Blevins home, posts in the “InJekt Division” channel lack a consistent or specific extreme ideology; the channel is a melting pot of extremist concepts, including accelerationism, fascism, misogyny and antisemitism, which group members refer to as “clerical fascism.” In a March 4, 2021 post, Korb wrote that “InJekt Division will always be a conglomeration of seemingly disparate creeds. The common denominator is that the representatives we have selected are striving to alleviate the world’s suffering via extremism.”

The use of the phrases “sink the boat” and “pray for rain,” are both common refrains in the channel that are often accompanied by images of death and nuclear fallout. A February 19 post by Korb claimed that “InJekt Division’s” inner most circle was led by the Shock Waffen Twins (SWT) who direct group activity, membership sponsorship, and the ideas expressed through the group. The post went on to say that “One half of S.W.T. is engaged in clandestine operations designed to SINK.THE.BOAT, while the other half…reminds you to pray for rain.” Both phrases imply a desire to accelerate chaos.

The “InJekt Division” also draws inspiration from the Quran, Arabic writing and Islamist extremist movements with an apparent goal to unite in their fight against Jewish people. One image featuring an individual wearing a headband with Arabic writing and a flag bearing a swastika in the background bore the captioned “we will continue our fight against Jewish filth and degeneracy, by God’s will; axis resistance will win.”

In another image, an individual that appears to be Blevins is wearing a swastika armband and a T-shirt with seal of the Islamic Revolutionary Guard Corps. Several posts include quotes from the Quran and the emblem for the League of Arab States, and among the channel’s users are those with screen names such as “Based Mujahideen” and “Muslim Waffen.” 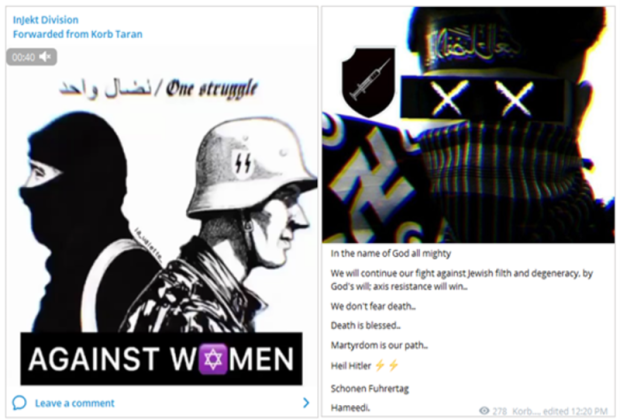 Blevins and the InJekt Division’s extreme ideology, which does not lend itself to a clear categorization, focuses on death, destruction, suffering and disaster. A February 2021 image posted by “Kørb Seppükrieg” (which appears to be Blevins) was captioned, “We don’t really care for the things we’ve put ourselves through, and for that we’ll have our revenge. There will be massive collateral damage. The frontlines are just beyond my field of vision. It’s like static electricity, or a broken T.V. We are all going to starve, suffer, and die; and I’m going to have everything to do with it.” 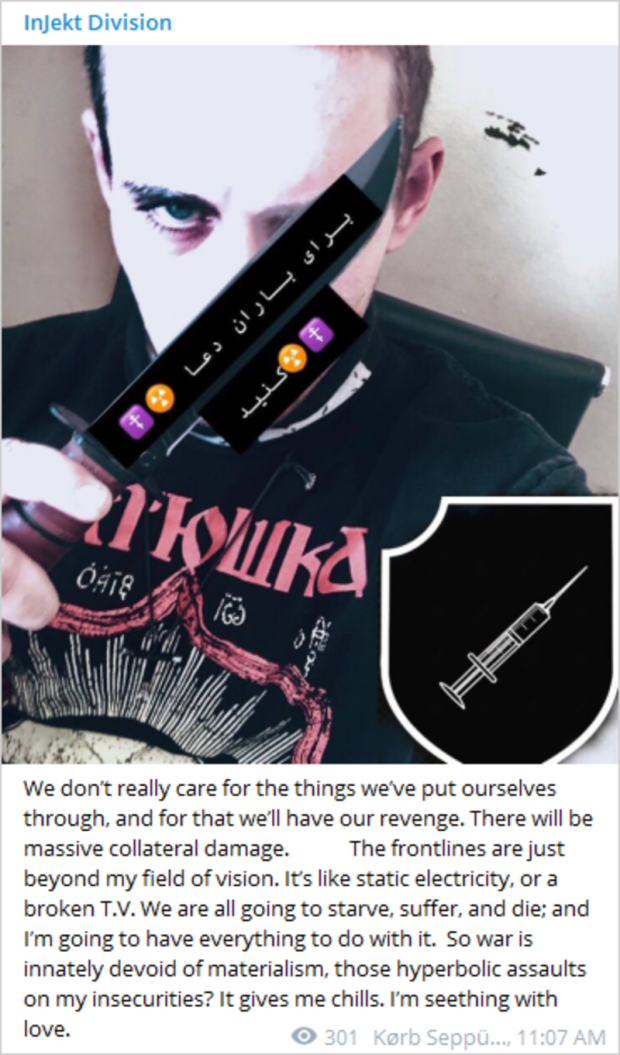