Today We Won a Battle Against Hate 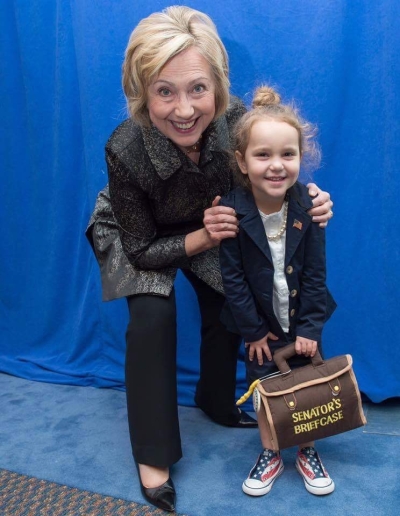 There are days when working for the ADL—coming face-to-face with so much hate and vitriol—one wonders, how do I get through today?

Then there are other days when good things happen.

A few days ago. ADL was able to strike a blow against hate in a measurable, concrete permanent and HOPEFUL way.  We do that every day, behind the scenes, but on this day we did it in full view, and got amazing results.

But let me back up: A few weeks ago, I saw the most jarring Facebook post by a woman whose beautiful four-year-old daughter had been violated publically and horrifically.

You see: A lovely picture of her daughter with Hillary Clinton had been turned into a hateful meme spread by bigots.

I believed ADL could help.  And we did. Now it’s gone viral -- and the focus of an inspiring news story in The Washington Post.

The following is Jennifer Jones’s story, in her own words:

I took my daughter to meet Hillary Clinton.  We were blessed to have an opportunity to get a photo of her with Hillary.  The adorable photo went viral and received a lot of positive attention from major media outlets.

And then, what happened next was a shock: what became a new treasured family heirloom was turned in to a hateful image by the “Men for Trump” Facebook page.  I found out through a friend of a friend who’d actually posted the meme on her page.  My friend was outraged, asked her friend to remove it and notified me.

I immediately wrote to the administrator of the page and told him I did not give permission for her image to be used—she’s 4 years old—and to take it down. He would not.  I then asked my friends and family to write to him and request the same. Eventually he agreed and took it down after the pressure of multiple emails.  I thought it was over.

Then a woman I know Googled my daughter’s name and found that in fact, the meme/s had been shared on every major social media site tens of thousands of times.  When I learned that, I was devastated. I felt like I failed my child.  I sat in my car and sobbed.  I’m a mom. I fix things and I didn’t know how to fix this. I felt helpless.

And then, my mama bear took over. This was a direct hit on my child and I knew what to do. I reached out to my Facebook community and asked for help.  I received messages from hundreds of strangers offering help and resources—many people suggested I get a lawyer, but I don't have the financial resources to do that.

One message among the hundreds stuck out: the one from Shaun at the Anti-Defamation League.  She told me she thought she could help and introduced me to her colleague, Jonathan Vick, ADL’s Assistant Director for Cyberhate Response.  After I spoke with Jonathan, I connected him with Hillary Clinton’s official photographer and the next thing I know, the meme is gone!

When the ADL followed up to let me know, I felt total relief.  I feel ready to celebrate! I knew of the ADL before, but I didn’t know they do this! I’m in love with the ADL and am willing to do whatever they need to help others in my position!

Jonathan knew that in the case of a copyrighted image, the copyright holder (Hillary Clinton’s campaign) can file a copyright takedown notice VIA counsel and have a hateful image removed.  We facilitated that process, and we won.

Thank you, Jennifer—for inspiring all of us to fight—and to the ADL for equipping us for the fight!