ADL has tracked the hateful activity of extremists for decades, but early in 2016 we were among the first to detect something different: A number of white supremacists, who identified as part of the Alt Right, were publicly voicing support for major presidential candidates. Other white supremacists were also cheering on candidates.

And, sometimes—knowingly or unknowingly—some of those candidates were retweeting the white supremacists’ messages.

So back in February, ADL issued a list of racist individuals and extremists groups who had inserted themselves into the campaign, along with key information about them, sharing it with each of the Democratic and Republican candidates.

“We are providing information to all of the campaigns to ensure that they steer clear of these extremists and others who promote anti-Semitism, racism and white supremacy,” said ADL CEO Jonathan Greenblatt.  Further, he said, “It is encumbent upon all candidates for office to reject and disavow these groups.”

Included on the list we gave to candidates was Richard Spencer, head of the racist National Policy Institute and the man who coined the term “alt right.”  While most people had never heard of him, we at ADL had been tracking—and exposing—him since 2008.

To inform the public about the Alternative Right (of which Spencer is a leader), in early 2016 ADL published Alt Right: A Primer About the New White Supremacy. 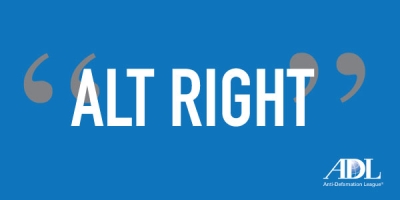 It contained a definition and chilling information: “Alt Right is short for ‘alternative right.’ This vague term actually encompasses a range of people on the extreme right who reject mainstream conservatism in favor of forms of conservatism that embrace implicit or explicit racism or white supremacy. … Alt Righters reject egalitarianism, democracy, universalism and multiculturalism. A number of Alt Righters are also blatantly anti-Semitic and blame Jews for allegedly promoting anti-white policies such as immigration and diversity.”

ADL quickly became a go-to source of information about the Alt Right, and just in time. Over the spring and summer, the online activity of Alt Right figures and other white supremacists escalated.

Neo-Nazis such as Andrew Anglin, founder of the white supremacist website The Daily Stormer, and Lee Rogers, of the anti-Semitic website Infostormer, were encouraging their followers to tweet anti-Semitic language and memes to Jewish journalists. Their efforts, and those of other Internet trolls, resulted in thousands of vile tweets sent to Jewish journalists, including photos of people in concentration camps with the faces of the targeted journalists Photoshopped onto them. ADL convened a prestigious group of journalists to quantify and study the phenomenon, producing a groundbreaking report that exposed these trolls to the entire world.

Tellingly, there was more noise from this corner right after the election. White supremacists, including those associated with the Alt Right, celebrated the results online:

ADL does have one positive thing to report about all this:  After Spencer’s National Policy Institute held a post-election conference—complete with Heil Hitler salutes—just blocks from the White House, President-elect Donald Trump condemned and disavowed the convention.

“More should be done to reassure those who are fearful of the upsurge in anti-Semitism and bigotry,” Mr. Greenblatt said. “ADL is prepared to engage constructively with the new administration in the work of fighting hate and bringing the country together, and at the same time will continue to hold them relentlessly accountable toward these goals.”