Top Ten Moments of Inspiration and Hope in 2022 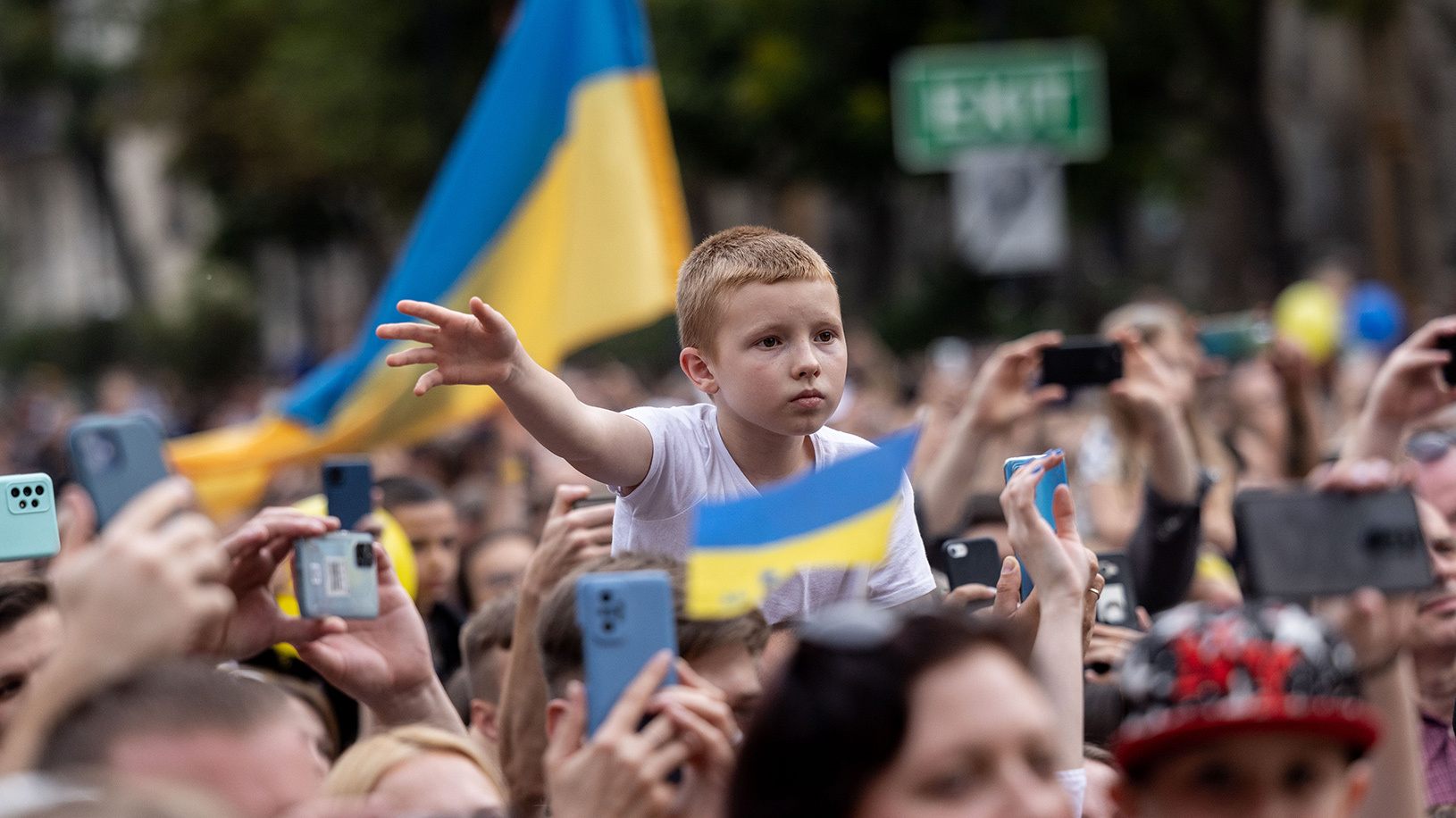 This is the image credit.

This is the image caption.

As 2022 comes to an end and we ready ourselves for 2023, ADL looks back on the moments from the last year that gave us some light, hope and inspiration. In our work to combat antisemitism and all forms of hate, we celebrated many of these moments as they advanced the fight against hate and prejudice and reaffirmed why our mission is so important in these challenging times.

In the last year we witnessed many heartening and historical events: The confirmation of the first Black woman Supreme Court justice, landmark pieces of legislation that codified gay marriage into law and made lynching a federal hate crime, the enduring bravery of the Ukrainian and the Iranian people fighting for freedom against tyranny -- just to name a few.

Here’s our list of the Top Ten most inspiring moments of 2022, as selected and curated by members of ADL’s staff, in chronological order.

The bravery demonstrated by the leadership and people of Ukraine 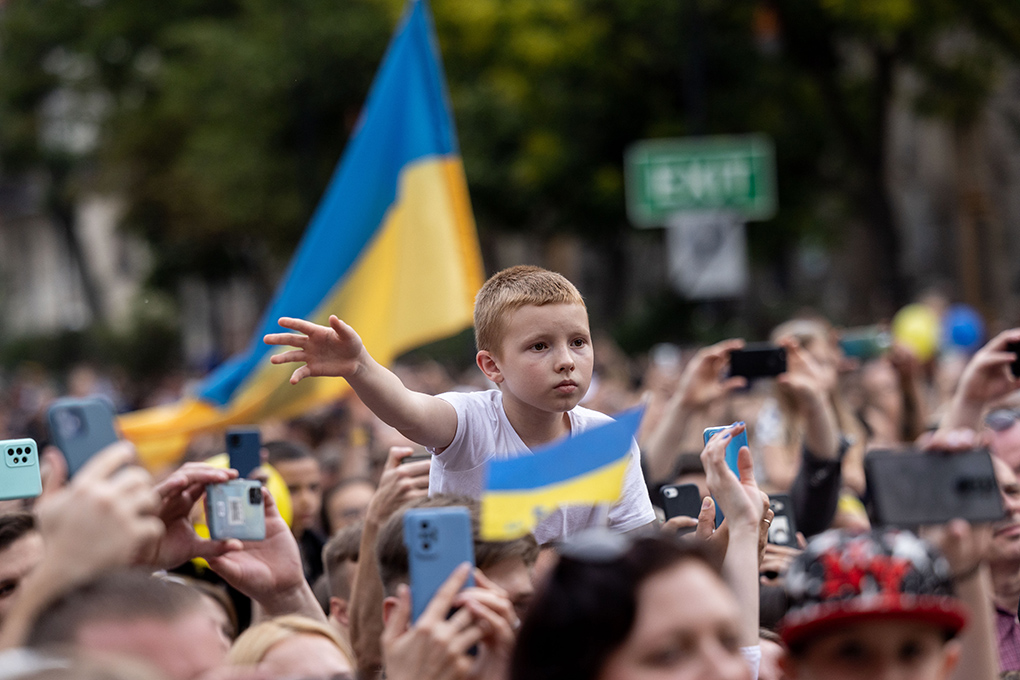 On February 24, 2022, Russian President Vladimir Putin launched an unprovoked invasion of Ukraine, setting off the largest armed conflict and refugee crisis in Europe since World War II. With American and allied support, Ukraine has mounted a strong defense despite being vastly outnumbered, but Russian bombing and shelling continues to pummel Ukrainian cities and infrastructure inflicting enormous civilian casualties.  In the 10 months of brutal conflict following Russia’s invasion, Ukrainian President Volodymyr Zelenskyy emerged as one of the most notable and heroic world leaders in his efforts to protect Ukraine’s sovereignty as a nation and has led his people and forces to turn the tide of the war. ADL has closely monitored the situation on the ground, particularly the impact on the Ukrainian Jewish community and we have voiced our solidarity in support for the Ukrainian people. 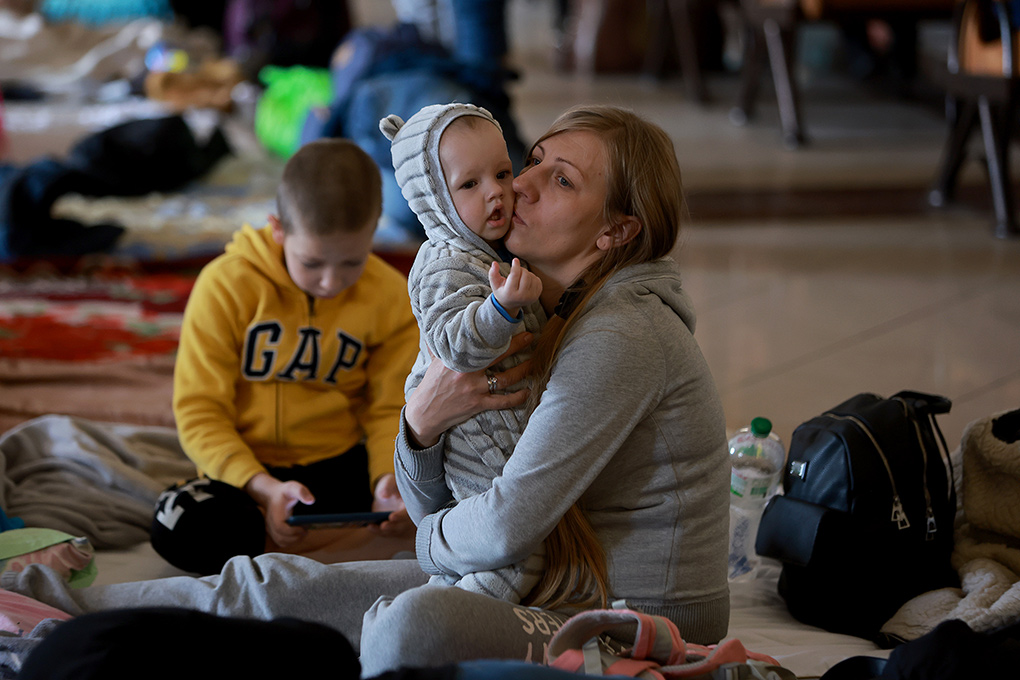 One of the most inspiring Jewish stories to emerge from the war in Ukraine came from Tikva Children’s Home in Odessa. In a two-week humanitarian effort, aid worker Jeremy Posen braved the war in Ukraine and brought more than 1,000 Jews to safety himself, including 270 orphans. Together with their caregivers and hundreds of other children, they carefully navigated areas hit by Russian artillery and air strikes and were held up by countless roadblocks. After successfully arriving to safety in Romania, Posen went back to Ukraine to help more refugees escape from harm’s way. This effort is just one inspiring story to come out of Ukraine as Jewish humanitarian groups around the world partnered together channeling $73 million dollars from fifty nongovernmental organizations. 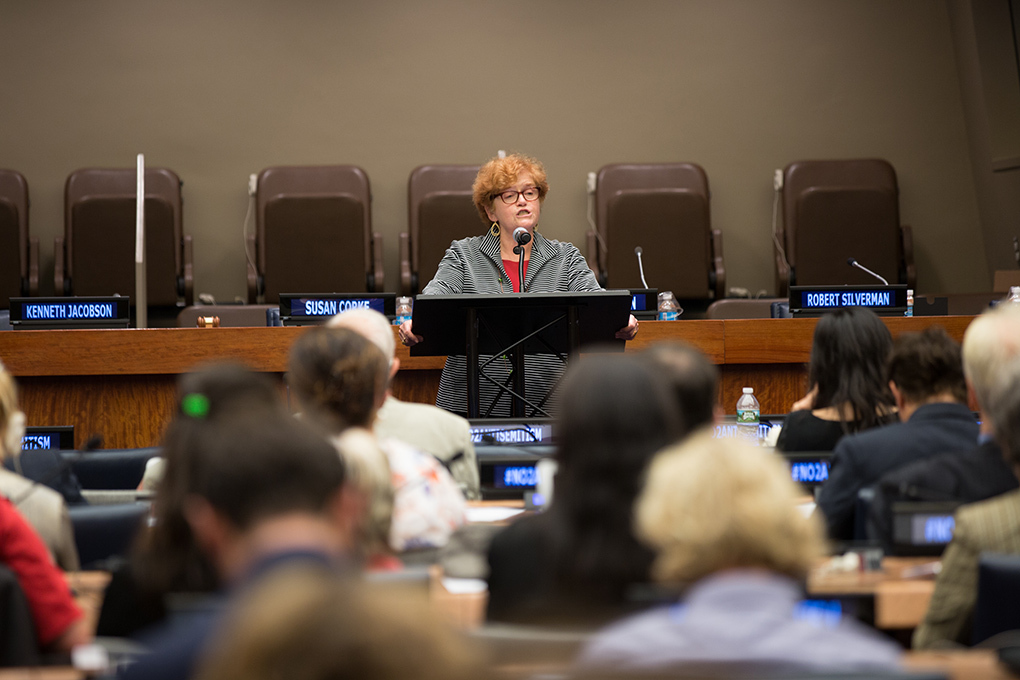 As acts of antisemitism increased at home and abroad in 2021, President Biden nominated Deborah E. Lipstadt for the post of Antisemitism Envoy at the State Department. Lipstadt was confirmed by the Senate on March 30, 2022 as the Special Envoy to Monitor and Combat Antisemitism, with the rank of Ambassador. As one of the foremost experts on antisemitism in the world, she is responsible for leading efforts to advance U.S. foreign policy to counter antisemitism around the globe.  In the process of her confirmation ADL joined other Jewish groups in advocating for Congress and the Biden Administration for her to fill the role with more than 7,500 ADL volunteers sending close to 25,000 emails to their Senators and meeting with 35 Senate offices in support of Dr. Lipstadt’s confirmation.

The U.S. makes lynching a federal hate crime with signing of  Emmett Till Antilynching Act 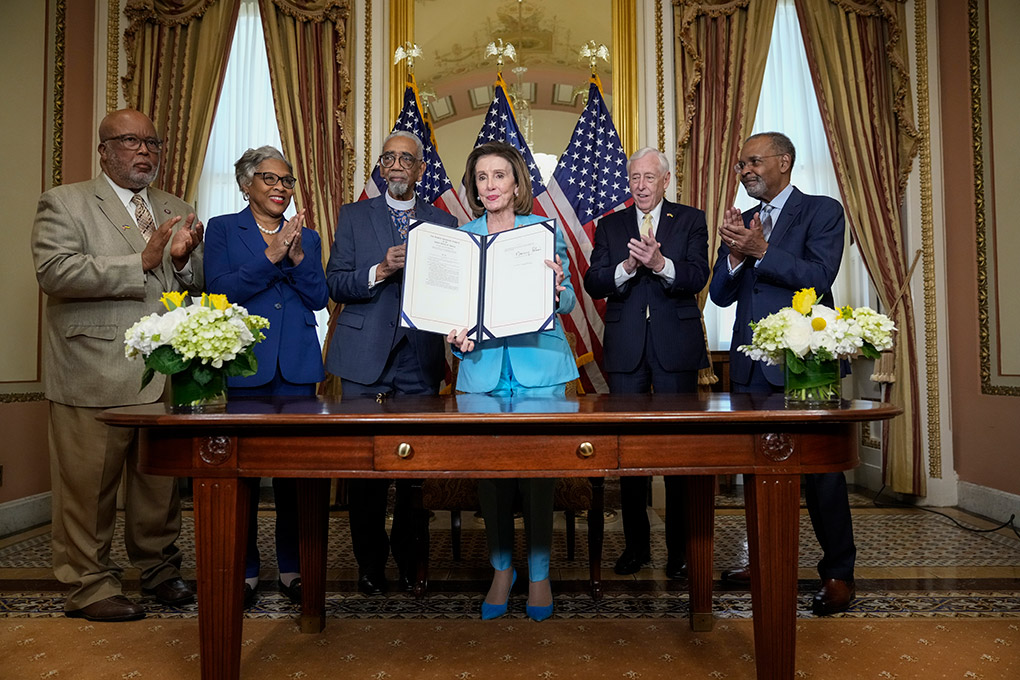 In August 1955, a 14-year-old Black youth named Emmett Till was lynched in a racist attack that shocked the nation and provided a catalyst for the emerging civil rights movement. Since the 1880s, Congress has tried and failed over 200 times to pass anti-lynching legislation. But this year, Congress finally passed the Emmett Till Antilynching Act, and the bill, which was strongly supported by ADL and our allies in the civil rights community, was signed into law by President Biden on March 29. Lynching was a terror tactic used against Black Americans, particularly in the racially segregated south. According to Tuskegee University, which collects records on lynchings, 4,743 people were lynched from 1882 to 1968 and 3,446 of them were Black. The passage of the Emmett Till Antilynching Act is a long overdue historic moment for the U.S., and while nothing can fix the past, this new federal law demonstrates a formal commitment to holding those who commit this heinous crime accountable.

When a Holocaust Remembrance Day event was cancelled, hundreds joined on Zoom to hear survivor’s story 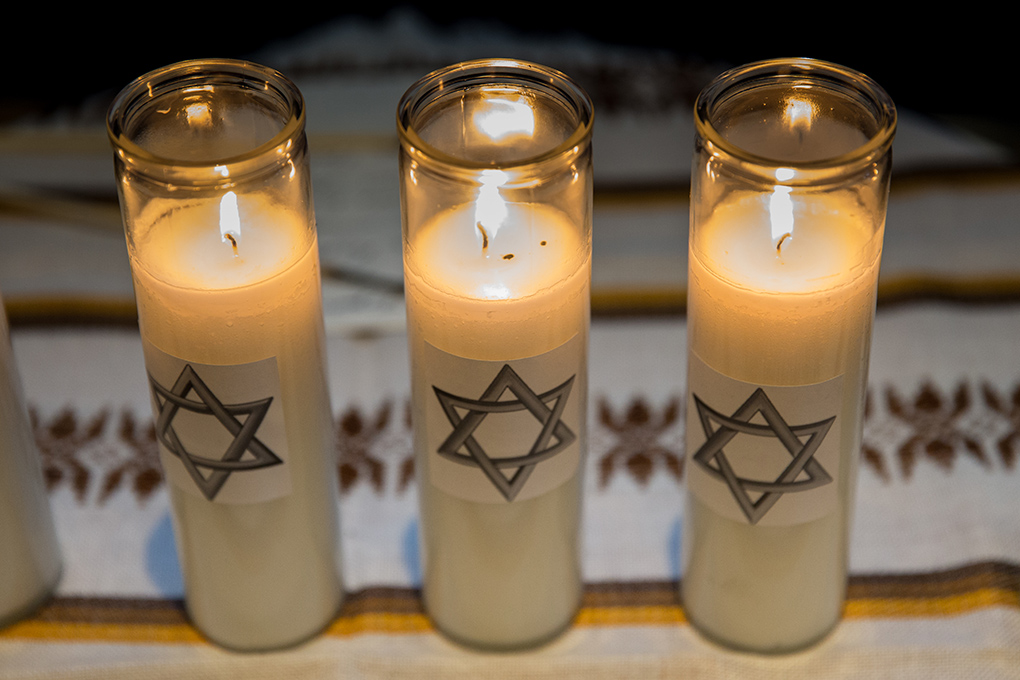 Arnold Friedland was scheduled to speak at a Holocaust Memorial Day event in Boulder Colorado and share his story, but due to lack of interest, the event was canceled. When 28-year-old community member Sydney Goldstein heard about this, she immediately organized a Zoom event for Friedland to share his story. Word quickly spread online, and the Zoom event quickly reached its maximum capacity of 300 attendees. Because of Goldstein’s organizing, Friedland was able to share his story of being separated from his Jewish parents at the end of 1942 when he was just six years old and being taken in by another family. After the war, he learned his parents had been killed at the Nazi concentration camp Auschwitz, where more than one million people were murdered. For Friedland, he was able to also share with attendees that despite the tragedy, he himself survived thanks to the generosity of others to live a full and successful life. 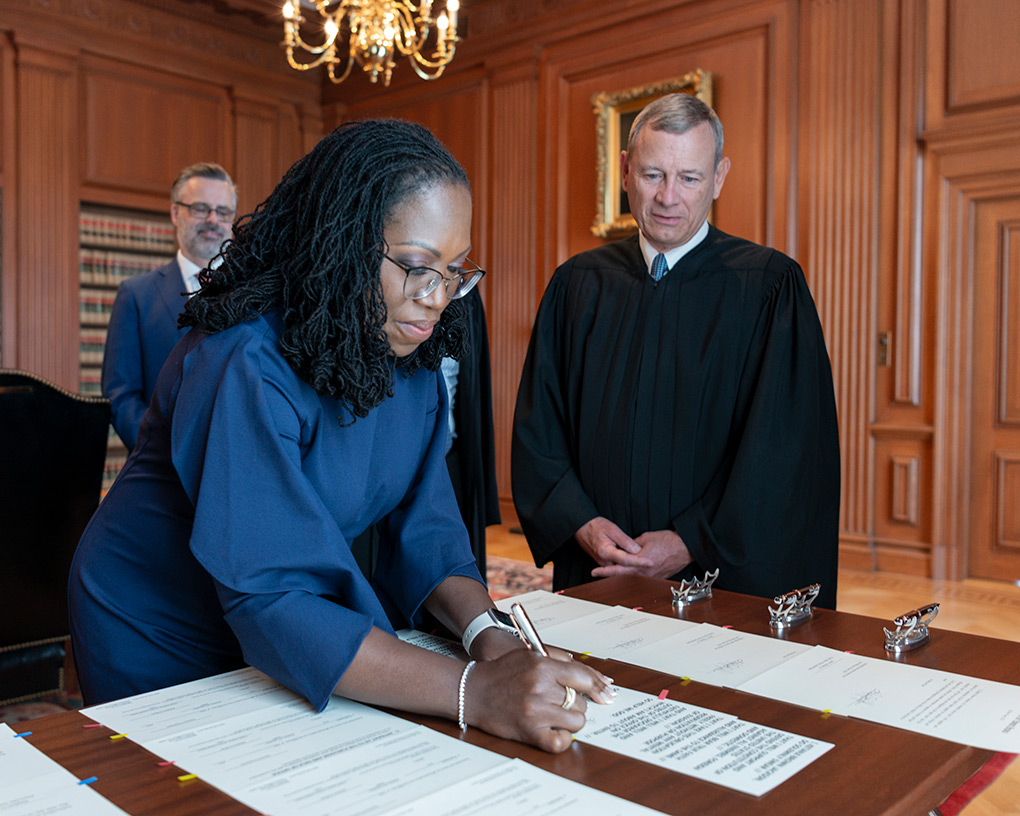 The U.S. Supreme Court is crucial to the progress of American society. Our rights to fully participate in democracy and in social and economic life depend on the Court. We have seen the power of the Supreme Court to both advance and undermine civil rights and equal justice under law. Each year, the Court decides critical cases involving voting rights, equal educational opportunity, fair employment and housing, women's rights, access to health care, immigration, consumer rights, environmental justice and criminal justice. These decisions directly impact our lives and the lives of our families and generations to come.

On February 25, President Biden nominated Judge Ketanji Brown Jackson to be an Associate Justice of the Supreme Court. Confirmed on April 7 and sworn in as the 116th Justice on June 30, she is the first Black woman Justice to serve on the Court. Since 1789, 115 justices have served and all but six have been white men. Lyndon Johnson appointed Thurgood Marshall, the first Black justice, in 1967, and Ronald Reagan appointed the first woman, Sandra Day O'Connor, in 1981. Justice Brown-Jackson’s confirmation is a historic step forward for our nation. 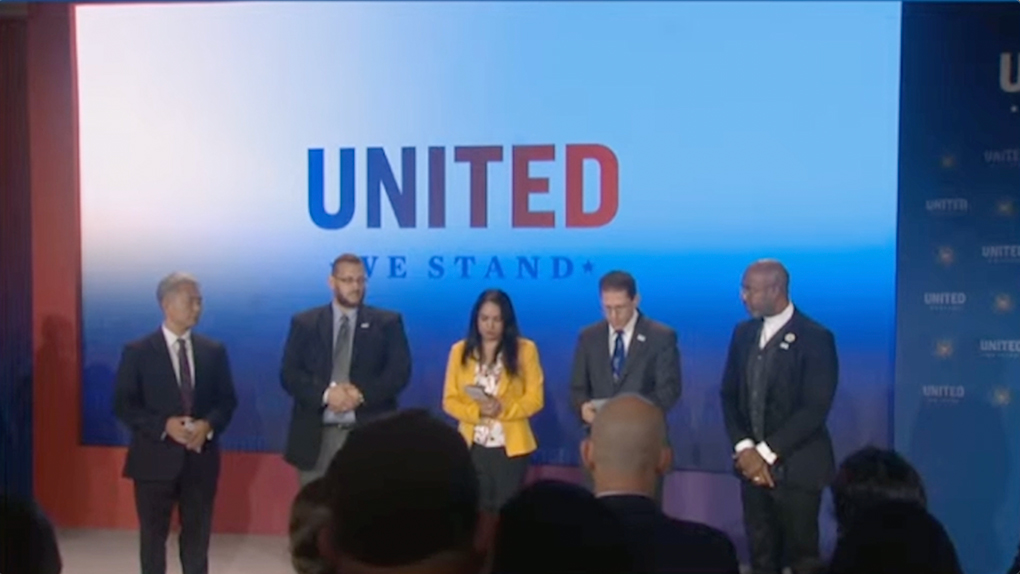 As our nation is rocked by rising rates of antisemitism and acts of hate, we look to our policy makers and leaders to bring communities together to enact meaningful policies, recognizing that a threat on one is a threat against all. On September 15 the Biden Administration hosted the “United We Stand" Summit to combat the corrosive effects of hate fueled violence on our democracy and public safety, following through on a request from ADL in the aftermath of the racially-motivated Buffalo shooting. The summit convened bipartisan leaders from all levels of government, civil rights groups and community and business leaders to put forward a vision for a more united America. Among the many deliverables from the summit  was ADL and the U.S. Conference of Mayors' renewed Mayors’ Compact Against Hate, Extremism, and Bigotry, which has been signed by a partisan group of over 170 mayors. Alongside the Summit, ADL also announced the Community Solidarity and Safety Coalition with 25 partner organizations, co-chaired with the National Urban League, to work together to address hate-fueled violence.  In furtherance of the White House’s commitment to counter hate, the Administration launched a nationwide listening effort and then, in December, President Biden announced the formation of a new interagency group charged with developing a national strategy on antisemitism. The new interagency group will aim to better coordinate and expand federal efforts to counter antisemitism in a whole of government and whole of society approach.  The “United We Stand” Summit and the actions that followed represent the importance of communicating issues of concern and working with elected officials in order to further protect our society and democracy as a whole. 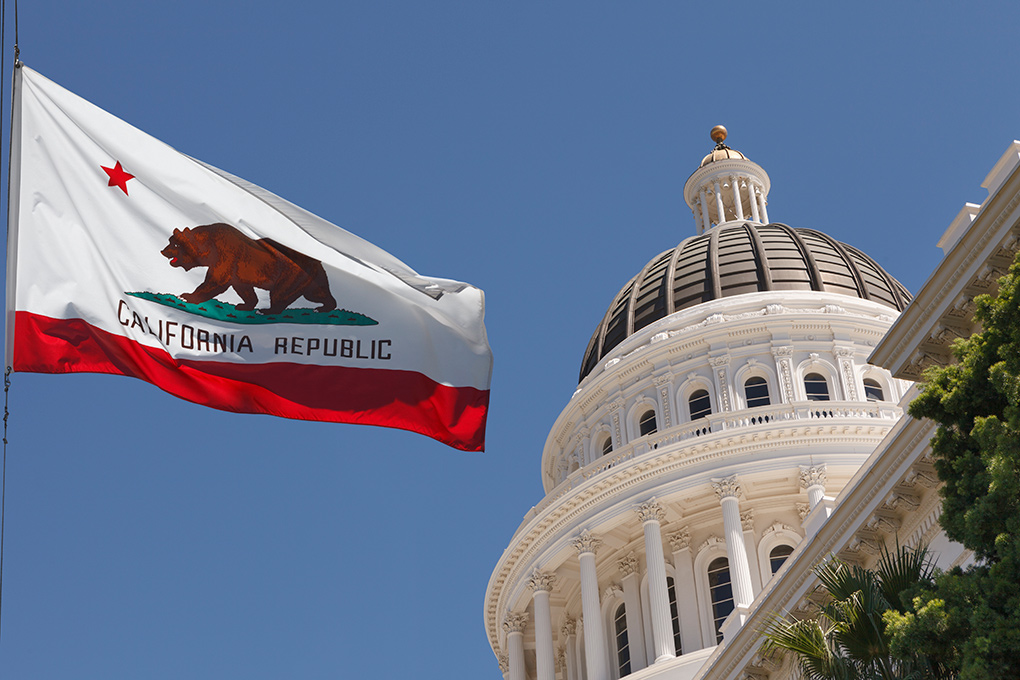 Virtual spaces within social media platforms are providing the lifeblood of extremism and hate and are often the first place where dangerous conspiracy theories and harmful attitudes can start. They spread far and fast across various platforms every single day, ranging from the antisemitic Great Replacement Theory to rumors designed to undermine government institutions to outright antisemitism. Thankfully lawmakers in California are addressing this problem. On September 16th, Gov. Gavin Newsom signed Assembly Bill 587 into law, which requires social media companies to publicly explain their efforts to prevent hate speech, disinformation and extremism. Platforms must provide detailed reports twice a year to the California Attorney General’s office detailing how they police their platforms to prevent the spread of harassment and hate. This important state-level legislation, strongly advocated by ADL as part of its #BackspaceHate initiative: ADL led a coalition of 90 organizations and mobilized over 300 volunteers to support the bill. We hope that it will serve as an example for how other states use strategic policy frameworks to hold social media companies accountable.

The relentless bravery of Iranian protestors 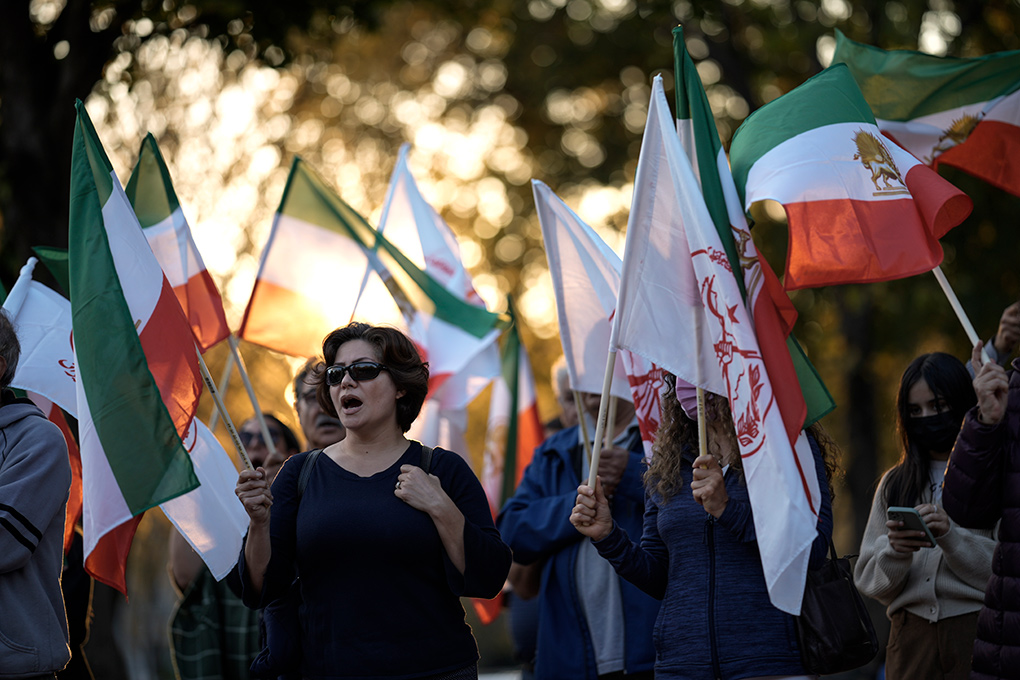 Iran has been rocked by the largest protests in years following the death of a Kurdish-Iranian woman named Mahsa Amini on September 16. The country’s morality police, tasked with enforcing strict codes around dress and behavior, arrested Amini for not wearing her hijab correctly and she died after 40 days in custody. News of her death ignited nationwide protests across the country. From bus drivers to university teachers and citizens in between, the astonishing bravery of ordinary Iranians protesting against an oppressive Iranian regime in this moment is particularly inspiring as it is led by women. The women of Iran have won such acclaim that Time Magazine named them and their movement Heroes of the Year for 2022.  The countless stories of courage and solidarity from the Iranian protests are an inspiration.  ADL’s Task For On Middle East Minorities has called on the international community to make clear to the Islamic Republic that it must guarantee women’s rights, human rights and rights of all ethnic, religious, gender and sexual minorities in Iran. 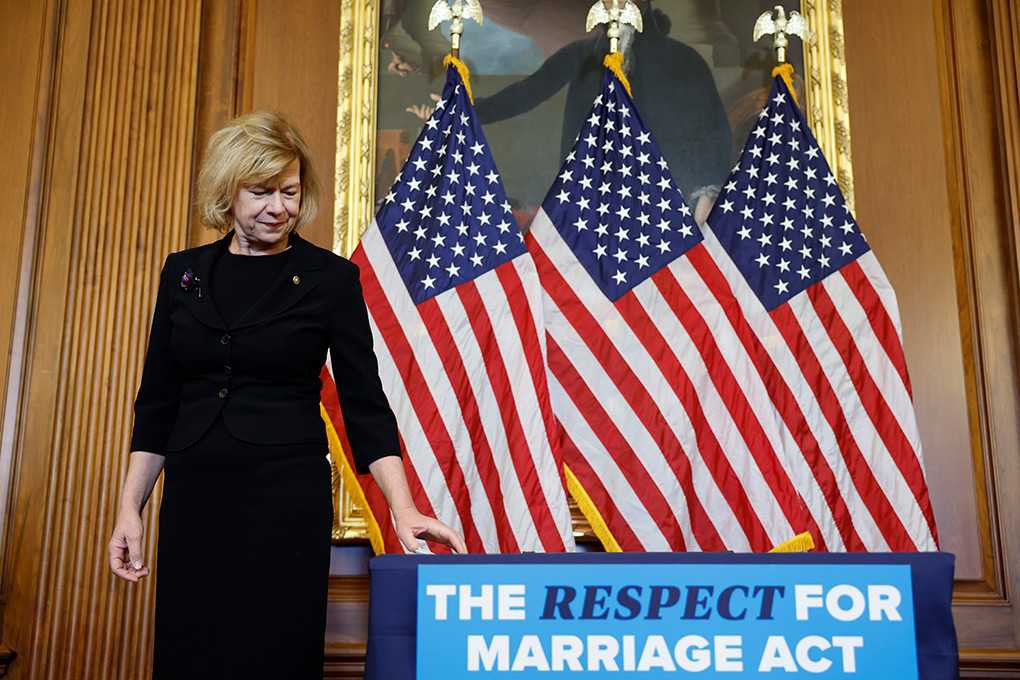 The freedom to marry campaign celebrated a triumph on December 13 when President Biden signed The Respect for Marriage Act into law following its passage through both the House and the Senate. This important piece of legislation provides relief to millions of families who were alarmed by the Supreme Court’s willingness to roll back rights on other issues by overturning Roe vs. Wade and Justice Clarence Thomas’ call for the court to revisit other landmark precedents, including marriage. This bipartisan act preserves the rights at both the federal and state levels to legally respect married same-sex couples and accord their marriages and unions equal treatment under the law.