As Trial Begins, Unite the Right Defendants Find Themselves in Changed Circumstances 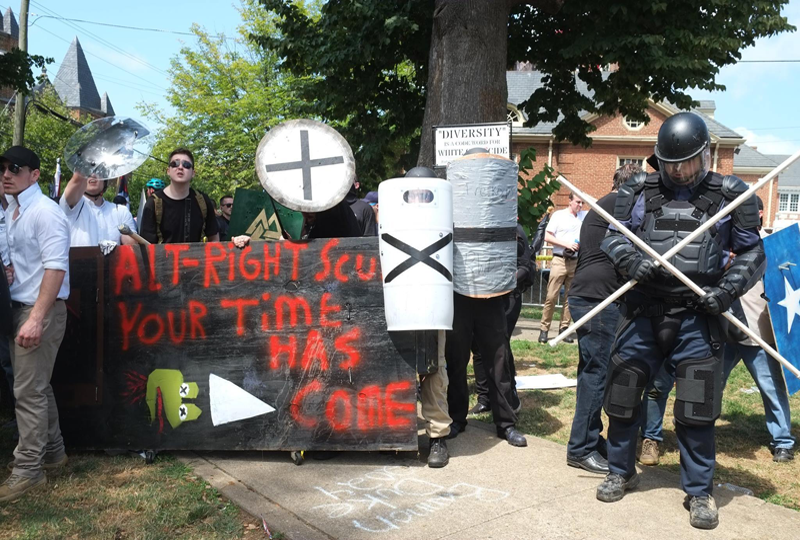 In the four years since the Unite the Right rally (“UTR”) in Charlottesville, Virginia, the major players and groups have undergone seismic change. This is certainly true for the defendants in the Integrity First for America lawsuit, which goes to trial this week.

In stark contrast to the white supremacist movement that formed alliances and crisscrossed the country in 2017, holding in-person events that culminated in the Unite the Right rally in August of that year, today’s groups and leaders reflect a loss of membership and influence. Legal challenges have found some imprisoned and others on the run, while others have departed the white supremacist movement entirely. The few groups that remain are embattled and disunited.

Several months after the Unite the Right rally, Identity Evropa (IE) parted ways with Richard Spencer. This was a huge blow to the white supremacist leader, who counted on the group’s members to attend and promote his events. Spencer went on to form Operation Homeland with Elliot Kline, who sided with Spencer and resigned from his position as leader of IE after just three months.

The goal of Operation Homeland was to “plan and carry out bold demonstrations, train and mentor young activists and foster collaboration among identitarians in America and around the world.” However, due to the fallout from Unite the Right, Spencer was barred from many planned appearances and was targeted by counter-protesters when he did speak. After a few months the group fell apart.

In the intervening years, Spencer’s profile in the white supremacist community has been significantly diminished. His National Policy Institute, a small white supremacist think tank, is now defunct. In November 2020, Spencer, who strongly supported Donald Trump in 2016, endorsed Joe Biden, saying, “"The MAGA/Alt-Right moment is over. I made mistakes; Trump is an obvious disaster…”

Richard Spencer currently co-hosts a podcast, called Radix Live, with Edward Dutton that often features explicit racist rhetoric and furthers antisemitic conspiracies. The podcast last aired on September 12, 2021, where Spencer reacts to the anti-abortion bill in Texas and weighs in on the “eugenic benefits” of abortion.

In the years since the Unite the Right rally, Christopher Cantwell, best known for his “Radical Agenda” podcast and for crying after learning there was a warrant for his arrest, has been embroiled in legal problems. Most recently, in February 2021, a federal judge sentenced Cantwell to 41 months in prison on extortion and threat charges stemming from a series of 2019 Telegram messages, including one in which he threatened to rape the wife of a Missouri-based white supremacist.

In March 2018, Cantwell was arrested for public intoxication. Four months later, Cantwell pleaded guilty to two misdemeanor assault charges for his illegal use of tear gas during the Charlottesville torch march the night of August 11. He was sentenced to two concurrent one-year jail sentences and was released from jail and banned from the state of Virginia.

Kessler has filed several lawsuits since the 2017 Unite the Right rally, each of which has ended in a dismissal. In broad terms, his suits allege that city of Charlottesville and Virginia state officials did nothing to prevent the violent altercations in the lead-up to the Unite the Right rally.  The most recent suit, which was dismissed in February 2020, claimed that the defendants – including the Charlottesville police chief, a state police lieutenant and two former city managers -- violated Kessler’s First Amendment rights when the rally turned violent. Kessler has filed a federal appeal.

On August 12, 2018, Kessler marked the first anniversary of the Unite the Right rally with the Unite the Right 2 rally in Washington D.C.’s Lafayette Park. The event was not well attended, reflecting a lack of support from the white supremacist movement.

Daily Stormer Book Clubs (SBC), the small, local crews of young white men who followed and supported Andrew Anglin and his neo-Nazi website The Daily Stormer, were responsible for 82 white supremacist propaganda distributions in 2019 and 80 in 2018. But the Book Clubs are currently inactive.

Daily Stormer contributor Robert Warren Ray, aka Azzmador, remains on the lam from felony charges related to his alleged use of pepper spray on counter-protesters during the tiki torch-lit march through the University of Virginia campus the night before UTR. In September 2020, a federal judge issued a bench warrant for Ray’s arrest after finding him in contempt of court for his repeated failure to appear for depositions related to the UTR lawsuit against him.

Anglin, who remains in hiding after several judges awarded punitive damages to victims of his various trolling campaigns, continues to post bigoted and racist commentary on current events such as the COVID-19 pandemic, the 2020 presidential election and the January 6 insurrection.

Kline, aka Eli Mosley, was one of the organizers for the August 2017 "Unite the Right" rally. After UTR, he briefly led Identity Evropa before creating a new white supremacist organization, Operation Homeland, with Spencer. After a New York Times documentary revealed he had lied to his followers about being an Iraq war veteran, Kline vanished from the white supremacist scene in February 2018.

Meanwhile, Patrick Casey took the leadership position of IE. In March 2019, Casey rebranded IE as the American Identity Movement (AIM) in an effort to distance the group from IE’s participation in UTR. AIM failed to gain traction and disbanded in November 2020, at which point Casey began to collaborate with Nick Fuentes and his Groyper Army. That relationship was short-lived, and they parted ways in February 2021.

League of the South, Michael Hill

League of the South (LoS) is a white supremacist group, led by Michael Hill, that advocates for southern secession and an independent, white-dominated South. Members participated in Unite the Right as part of the Nationalist Front, and while the LoS continued to take part in post-UTR events alongside other Nationalist Front groups, the organization withdrew from the alliance in August 2018. In 2019, the LoS met privately and held several flash demonstrations in the South but were quiet in 2020. In September 2021, they held their first national conference since 2019. The speakers included Hill, Sam Dixon, Eddie Miller, James Edwards and David Duke.

Michael Tubbs, who was one of the leaders of the march in Charlottesville, continues to be involved with the League of the South. In August 2021, he participated in the LoS's Florida State conference.

Nationalist Front is the umbrella organization formed in 2016 by the National Socialist Movement (NSM) to help bolster their numbers at public events and unite various factions of the white supremacist movement, including League of the South, Traditionalist Worker Party and Vanguard America. The coalition fell apart in early 2018.

Nationalist Socialist Movement (NSM), once the largest and most prominent neo-Nazi group in the United States, led the Nationalist Front phalanx into Charlottesville. Under the leadership of Burt Colucci, who took power in March 2019 after longtime leader Jeff Schoep renounced the movement and stepped down, the group has failed to hold an event with more than 10-15 participants. In April 2021, Colucci was arrested in Chandler, Arizona, for aggravated assault after he allegedly pointed a gun at a Black man during an argument. At the time, Colucci and approximately nine other NSM members were in Arizona to participate in the NSM’s annual event, which coincides with Adolf Hitler’s birth week.

The Traditionalist Worker Party (TWP), a neo-Nazi group which formed in 2015 and grew substantially in 2017, played a significant role in UTR by using its alliances with other segments of the white supremacist movement including neo-Nazis, traditional white supremacists, racist skinheads and alt right leader Richard Spencer. TWP remained active through early 2018, when the group dissolved into chaos after co-founder and leader Matthew Heimbach was arrested for domestic battery for allegedly assaulting his wife and father-in-law and TWP co-founder, Matt Parrott.

In February 2021, Matthew Heimbach reportedly renounced his white supremacist beliefs, but reversed course in July 2021, returning as a “white socialist” and host of  “National Bolshevik Public Radio.” He claims his current “sympathies” are with communists and socialist ideals and says he would like to work with organizations focused on reducing economic inequality.

When details of Heimbach’s infidelity became public, Parrott announced that he was leaving the white supremacist movement and allegedly destroyed the membership information for TWP.

Parrott has consistently maintained that TWP will “never” be relaunched or “retooled.”

Vanguard America (VA) splintered shortly after Unite the Right and has shown very few signs of activity in the years since. Meanwhile, Patriot Front, the VA splinter group formed by UTR participant Thomas Rousseau, is one of the country’s most visible white supremacist groups. In an effort to distance the new group from VA’s neo-Nazi roots, Patriot Front avoids traditional white supremacist language and symbols, presenting their blend of white supremacist and neo-fascist ideology as “patriotism.” In 2020, Patriot Front was responsible for approximately 80% of the white supremacist propaganda distributions recorded by ADL’s Center on Extremism.

In February 2019, Fields was sentenced to life in prison on federal hate crime charges for driving his car into counter-protesters following the Unite the Right rally, killing one woman and injuring dozens. He pleaded guilty to 29 violations of the Matthew Shepard and James Byrd Jr Hate Crimes Prevention Act.

Vanguard America has denied that Fields was ever a member of their group, even though he was photographed standing shoulder-to-shoulder with VA members, and carrying a shield bearing the group’s fascist symbol during UTR.

Founded in 2017, the Fraternal Order of Alt Knights (FOAK), led by Kyle Chapman (aka Based Stickman), was part of the Proud Boys and for a short time acted as the group’s “military wing.” FOAK quickly became known for their bigotry, misogyny and Islamophobia, and for violent confrontations with counter-protesters.

Augustus Sol Invictus (born Austin Mitchell Gillespie), is a far-right propagandist, activist and politician (he unsuccessfully ran for U.S. Senate in 2016) and attorney from Orlando, Florida who has defended white supremacists. Prior to the Unite the Right rally, Invictus and Richard Spencer wrote an “alt right manifesto.” In 2020, he was briefly jailed on domestic violence-related charges but is currently out on bail

***Robed/uniformed Klan members were not welcomed at Unite the Right, but a number of Klansmen attended in “plain clothes.”

The Loyal White Knights are a North Carolina-based Klan group whose most consistent activity is the distribution of racist, antisemitic, homophobic and Islamophobic fliers.

In July 2017, approximately fifty Klansmen associated with the LWK rallied against the removal of a statue of Robert E. Lee from a park in Charlottesville, Virginia. The rally, scheduled between two events at the same location, a rally and torch march in May 2017 and the infamous “Unite the Right” rally in August, reflected the LWK’s interest in taking advantage of the alt right’s rising visibility. While it was the largest rally organized by a Klan group in recent years, the event failed to draw support from the rest of the white supremacist movement.

Since Unite the Right, the LWK have held two public rallies, one in Hillsborough, North Carolina, with approximately 16 members in attendance, and a second in Hanover, Virginia, which attracted about a dozen participants.

***Robed/uniformed Klan members were not welcomed at Unite the Right, but a number of Klansmen attended in “plain clothes.”

The East Coast Knights are a Pennsylvania-based Klan group claiming to have chapters (or “realms”) in several states around the country. In the four years since Unite the Right they have held small private gatherings and distributed propaganda mainly in the states of Indiana, North Carolina, Ohio and Pennsylvania.

In July 2019, a city monument in Wilkes-Barre, Pennsylvania, was removed after someone noticed that a plaque reading “East Coast Knights of the True Invisible Empire” had been added to the monument. The plaques were available for purchase by individuals and businesses as part of the city’s bicentennial celebration.