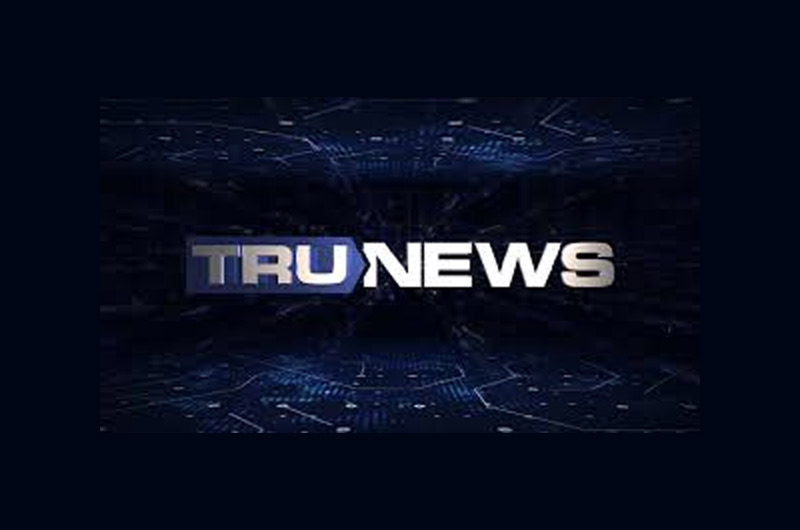 While TruNews has its own website showing its news segments, the organization also posts and livestreams content on social media platforms. In February, YouTube banned TruNews from the platform, apparently for terms of service violations. This removal followed PayPal’s and donor management companies Bloomerang’s and Spreedly’s January 2020 decisions to stop processing TruNews’ donations.

Facebook, despite clear evidence of TruNews’ hate speech wrapped in conspiracy theories, continues to host the outlet’s livestreamed news segments and pre-recorded videos -- along with the vitriol-filled comments – to more than 140,000 followers, without limitation.

Wiles and his fellow hosts often combine their hate speech with extreme conspiracy theories. In the past, they have alleged that the U.S. government planned to spread the Ebola virus on U.S. soil, and that the U.S. and Israel created ISIS. More recently, the videos on their Facebook page focus on a supposed Zionist plot for global takeover and Jews’ responsibility for COVID-19 (thanks to not following Jesus), as well as for the impeachment of President Trump. In a Facebook discussion, Wiles suggested, “We could sell Jew Coup t-shirts, Jew Coup hats, all that kind of stuff. We’d make a fortune." He continued, “The reason that [the Jew Coup regalia] came to my mind is that the Lefties and the Zionists are all worked up – They want the White House to ban us forever from attending any event [as press].”

TruNews’ Facebook livestreams and videos—filled with age-old antisemitic tropes and hate speech—are often viewed tens of thousands of times, attracting hundreds of likes and comments. In a May 11, 2020 video viewed 60,200 times as of this posting, and with 1,600 shares and 2,800 comments, Wiles said, “They’re called Zionists. They’re called the synagogue of Satan. Let’s get real about what’s going on here, folks. This is a global takeover.” He claimed that the Federal reserve, IRS, and income tax were all “Zionist operations” in order to “suck money out of the American middle class.” In a July 7, 2020 Facebook livestream, Wiles’ cohost expressed concern over “the looming crisis of homosexuals, mis-gendered individuals coming in and getting a job in your organization.”

The “Synagogue of Satan” caused the decline of America

Rick Wiles and his cohosts have obliterated the distinction between Jews and Zionists, referring to them interchangeably in their constant conspiratorial and antisemitic commentary. In one Facebook livestream from March 2019, they railed against “old evil wicked kabbalah wizard rabbis,” claimed that Jews crucified Jesus 2000 years ago in order to build a “Zionist empire” and asserted that Jews plan to kill and persecute Christians. That came on the heels of a March 2019 livestream posted on the TruNews Facebook page, in which Wiles refers to “abortion, homosexuality, pornography, the wars that we keep going into” as “Jewish operations.” Wiles elaborated, “Our culture has been decimated. Through abortion, pornography, the sexual liberation movement, filthy, raunchy movies, television shows, vile, violent rap music and hip hop…All of it owned by the synagogue of Satan…” In a January 2020 Facebook video with over 8,000 views as of this posting, Wiles claimed that “Zionism is the darkest spiritual, demonic stronghold in control of America today. I’ve come to realize this is a demonic stronghold that is destroying America.” He continued, “Most evangelical leaders in America are shamelessly eating out of the hands of the Israeli Zionists...These shepherds of shame have become useless to Jesus Christ. They too have been compromised by the Israelis...It was done with Jewish money.”

America has been overthrown by the “Zionist Regime”

A common conspiratorial antisemitic trope found among Wiles’ Facebook videos is that Jews/Zionists have taken over America and are the result of the country’s woes. He asserted that “Israel secretly seized control of America over the past thirty years…The result is thousands of American soldiers have died and tens of thousands maimed fighting endless wars in Afghanistan, Iraq, Libya, Syria, and other countries on behalf of Zionist Israel.” In March of this year, a livestream, with over 22,000 views and 1,400 comments as of this posting, alleged that “The Talmud has triumphed in America over the Holy Bible. And that’s why we have abortion. Because the Talmud is being enforced by our courts and our government agencies.” In that same Facebook video, Wiles stated that “you can’t bring yourself to admit that America was overthrown by a Zionist regime. And that’s why America has gone anti-God. That’s why America is anti-Christ. That’s why America is pagan: Because we’ve adopted the Talmud-values.”

The Israeli Mossad is running a sex slave ring in America

TruNews videos frequently espouse the antisemitic stereotypes about Jewish control and manipulation of global politics. Since the beginning of 2020, TruNews’ Facebook page has repeatedly promoted the conspiracy theory that financier and convicted sex offender Jeffrey Epstein was involved in a “30-year operation to corrupt American politicians through a child sex sting operation run by Mossad.” Wiles also alleges, without evidence, that “For the past thirty years this nation has allowed a foreign nation, Israel, to recruit vulnerable teenage girls from American towns and cities and promise them money and glamour and travel. Instead, thousands of girls were entrapped as sex slaves to satisfy the carnal lust of American leaders who eagerly sold their dignity to the Israeli Zionists.”

Facebook’s “community” approach allows TruNews followers to leave platform-violating comments on the outlet’s baseless content. The comments include flagrant hate speech, featuring memes including the infamously antisemitic hooked-nose Jew caricature, and allude to conspiracies of Jewish control and Jewish money. Some refer to Jews as “psychopaths,” “the enemy” and “the greatest danger to all humanity.” 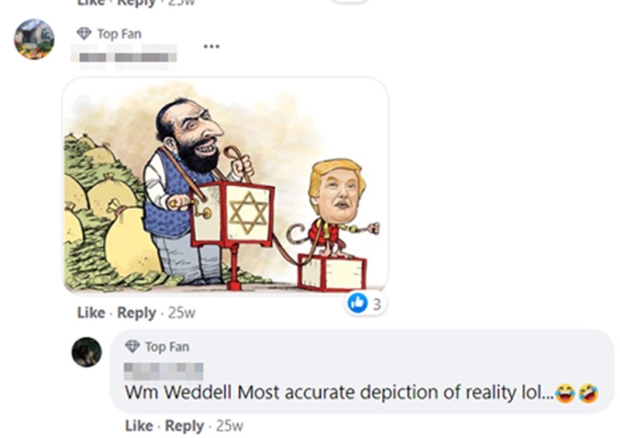 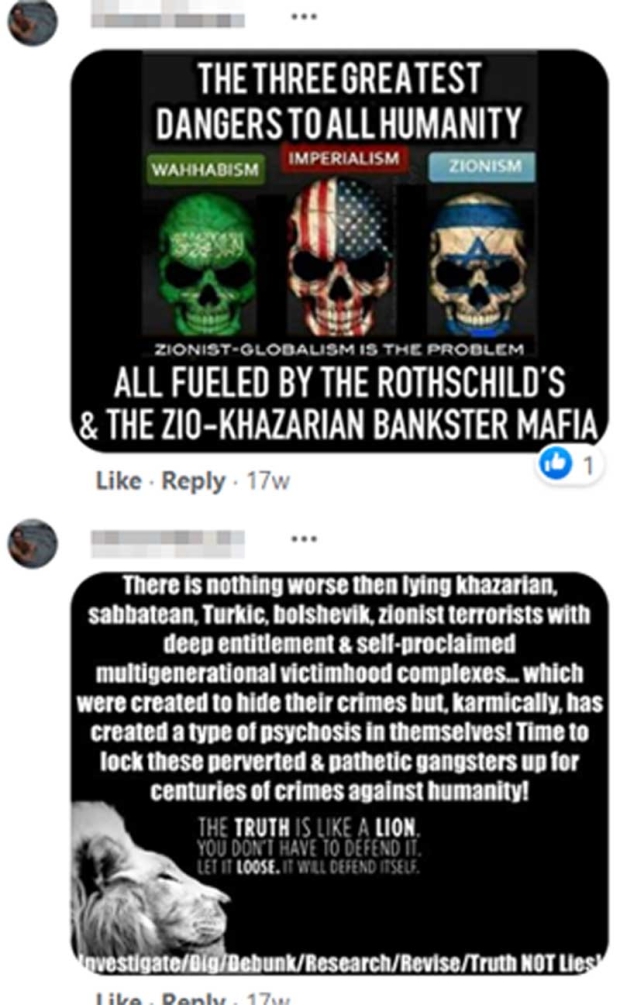 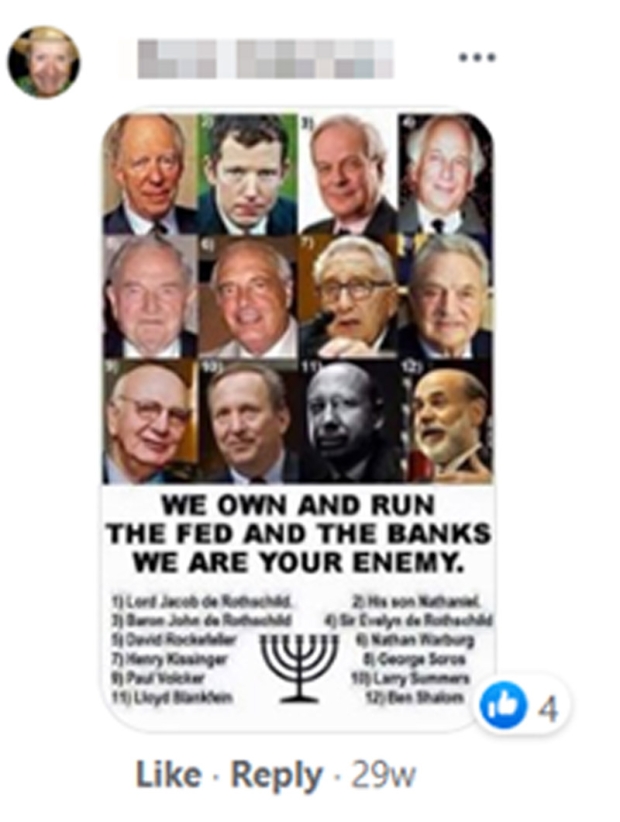 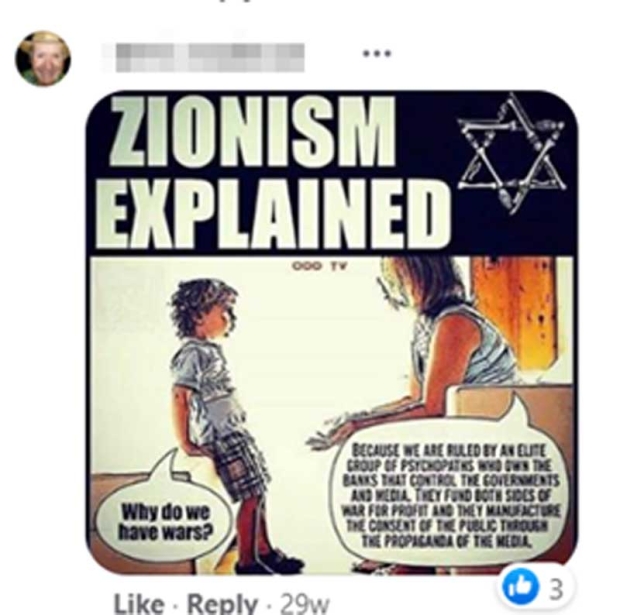 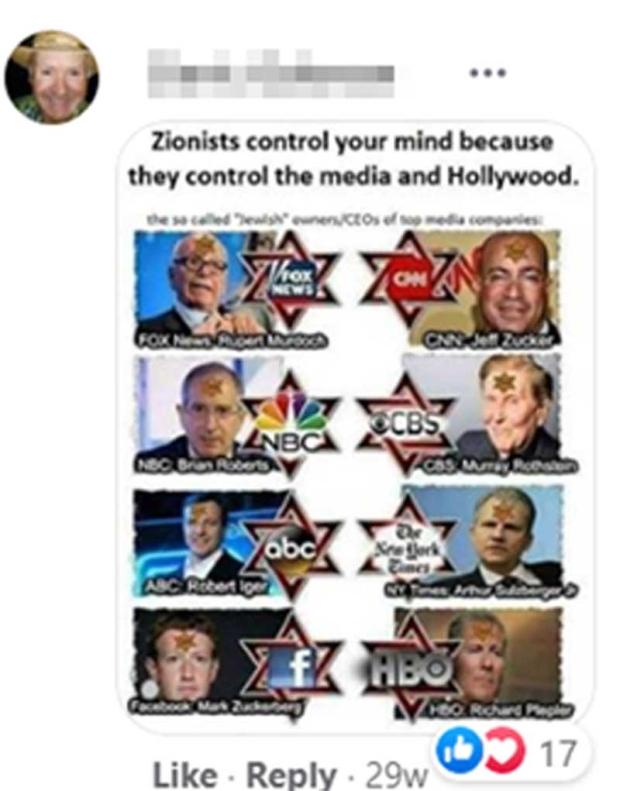