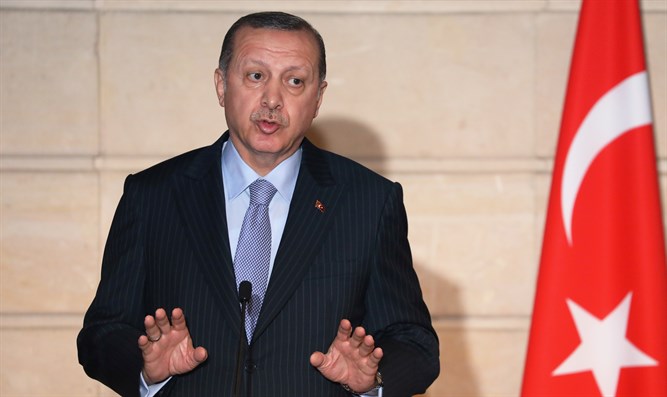 As world attention focused on the demonstrations taking place earlier this month along the Gaza border, Turkish President Recept Tayyip Erdogan fanned the flames of incitement against Israel and Jews with remarks comparing Israel to Nazi Germany. It was just another in a long line of his vocal criticism of Israel, using incendiary language and anti-Semitic statements to attack Israel and mobilize Turkish and Muslim action against the Jewish State.

Just days after the May 14 Gaza clashes following the opening of the U.S. Embassy in Jerusalem, where as many as 60 Palestinian protestors were killed (the majority of which were identified as members of Hamas), Erdogan addressed a summit of the Organization of Islamic Cooperation where he compared Israel to Nazi Germany, saying that “there is no difference between the atrocity faced by the Jewish people in Europe 75 years ago and the brutality that our Gaza brothers are subjected to.”  He repeated this Nazi comparison later in his speech, saying that the leadership of a people “who were subjected to all kinds of torture in the concentration camps during World War II is attacking the Palestinians with methods similar to the Nazis”, adding that “I will say openly and clearly that what Israel is doing is banditry, brutality and state terror.”

That same day he addressed a crowd of tens of thousands of people who he had mobilized to demonstrate against Israel in Istanbul.  He once again referenced the Holocaust, saying that “We believe a people who were victims of the Holocaust will not give consent to the crime against humanity committed by their own state”.

He followed his statements with concrete measures by recalling Turkish ambassadors from both Israel and the US for consultation and vowed to reevaluate economic ties with Israel and urged Muslim countries to impose sanctions against countries which follow the US by moving their embassies to Jerusalem.

Erdogan has a long history of anti-Semitic language when it comes to Israel.  Months earlier, after President Trump’s initial recognition of Jerusalem as Israel’s capital on December 6th Erdogan had alleged that this recognition was a result of the US president’s “Zionist mentality.”

During the military confrontation between Israel and Hamas in the summer of 2014, also known as Operation Protective Edge, he said that “Just like Hitler, who sought to establish a race free of all faults, Israel is chasing after the same target.”  He went on to say that “they kill women so that they will not give birth to Palestinians; they kill babies so that they won’t grow up; they kill men so they can’t defend their country ... They will drown in the blood they shed.”   A few weeks earlier, in July 2014, Erdogan made similar Nazi comparisons when he stated that “(Israelis) have no conscience, no honor, no pride. Those who condemn Hitler day and night have surpassed Hitler in barbarism."

These statements reflect not only Erdogan’s ongoing efforts to claim moral leadership in the Muslim world, but were also made with an eye to domestic politics – the Turkish general elections are currently slated for 24 June.