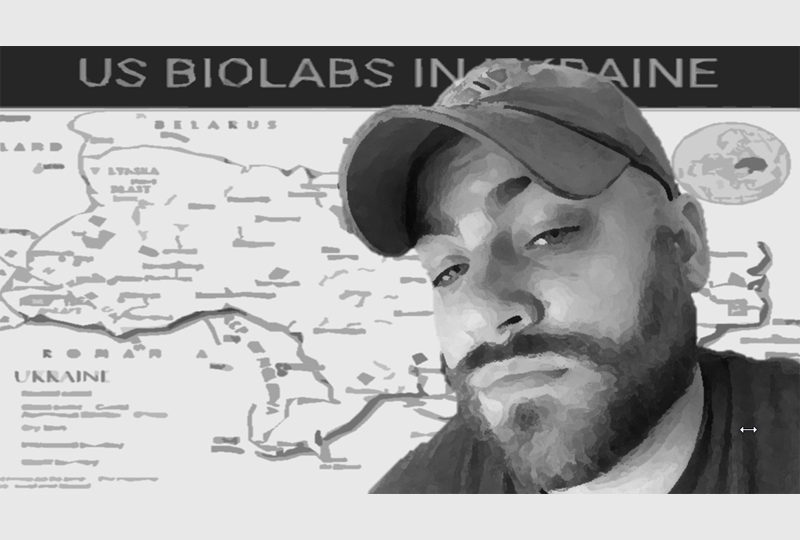 Update: On Tuesday, April 5, 2022, Creech appeared on the Alex Jones Show, where he confirmed his identity -- and his role in perpetrating the biolab conspiracy theory.

The ADL Center on Extremism has, with a high degree of confidence, identified “Clandestine,” the man behind the viral biolab conspiracy theory, as Jacob Creech, a self-described former restaurant manager and Army National Guard veteran living in rural Virginia. The discovery highlights how a fringe QAnon figure, harnessing the power of social media, sparked a viral conspiracy theory that – in just a few weeks – made its way from QAnon to the world stage, amplified by Tucker Carlson, white supremacists Nick Fuentes and Vincent James, members of the Proud Boys, and Steve Bannon – and even the Kremlin.

On February 24, as Russia’s invasion of Ukraine got underway, Creech, tweeting from his now-suspended @WarClandestine account, posted a thread claiming that Russian airstrikes were targeting “U.S. biolabs” in Ukraine.

“China and Russia indirectly (and correctly) blamed the US for the C19 [Covid-19] outbreak,” Creech tweeted. “And [they] are fearful that the US/allies have more viruses (bioweapons) to let out.” The invasion, he posited, was a smokescreen for Russia to destroy U.S. biolabs in Ukraine, thus preventing another global pandemic.

Within hours of Creech’s initial tweet, InfoWars, a conspiracy site run by Alex Jones, published a story promoting the biolab conspiracy, crediting @WarClandestine for uncovering what it dubbed the “ulterior motive theory.” QAnon forums and Telegram channels also began to share the theory. Meanwhile, the hashtag #USBiolabs began trending on Twitter and TikTok, where posts promoting the conspiracy racked up tens of thousands of likes. 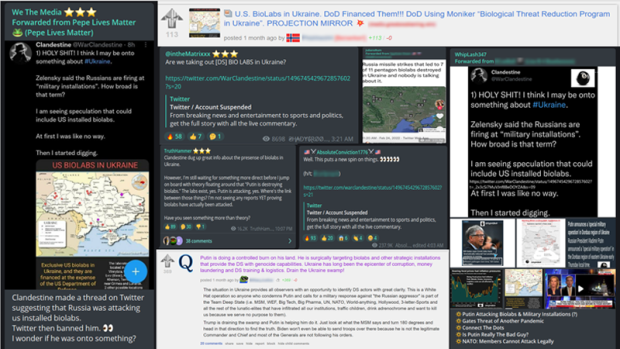 Within hours of his initial thread, Creech’s biolab theory began to spread across QAnon communities on Telegram and greatawakening.win.

While Russia has peddled false claims about U.S. biolabs in the past, Creech’s thread helped revive a languishing Russian disinformation narrative, providing the Kremlin with another explanation to justify its invasion of Ukraine. On February 27th – just three days after his thread was posted – the Russian Embassy in Bosnia and Herzegovina posted on Facebook endorsing the theory, accusing the United States of stuffing “Ukraine with biolaboratories, which – quite possibly – were used to study methods for the destruction of the Russian people at the genetic level.” Creech celebrated the embassy’s claims, tweeting from a new account, @clandestinenot, “My hypothesis was correct!... Russian air strikes in Ukraine have nothing to do with Ukraine, but rather AMERICAN ASSETS in Ukraine! It means this “war” is MUCH bigger than Ukraine. It’s a skirmish with the United States of America.”

Russia’s false biolab claims quickly raised concerns that it was laying the groundwork for a future attack against Ukraine using biological weapons. During a Senate Foreign Relations Committee hearing on March 8, Senator Marco Rubio (R-FL) questioned U.S. Undersecretary of State Victoria Nuland about Russia’s claims. During her testimony, Nuland confirmed that Ukraine had “biological research facilities” and noted that the U.S. was concerned Russia could gain control of them.

Nuland’s testimony was quickly seized upon by QAnon adherents and right-wing media outlets as “proof” that the biolabs conspiracy was true. A day after the Senate hearing, Fox News host Tucker Carlson, citing Nuland’s testimony, accused the U.S. government of lying about funding secret biolabs in Ukraine. “If, for example, you were funding secret bio labs in Ukraine, but wanted to hide that fact from the people who are paying for it, in whose name you're doing it, then you might lie about it by claiming the Russians were lying about it,” Carlson said.

As the biolab theory continued to gain traction, Creech repeatedly took credit for coming up with the conspiracy and celebrated its dissemination in mainstream spaces. “YOU GUYS TUCKER’S OPENING STATEMENT IS THE BIOLABS STORY. The story is on the most watched show in America,” Creech wrote on Telegram on March 9, shortly after Tucker Carlson’s broadcast began. “HOLY SHIT WE FUCKING DID IT.” In a follow up post, Creech wrote, “I am trying to get in contact with Tucker [Carlson], [Dan] Bongino, [Jesse] Watters, [Steve] Bannon, Alex Jones. If they wanna use my thread and they wanna send this mainstream, then I guess it’s time to go mainstream.”

Creech, under his aliases WarClandestine and BioClandestine, has twice appeared on RedPill78, a popular QAnon show hosted by Zak Paine, to promote the biolab theory. “I'm the one who wrote the [Twitter] thread that kind of took the world by storm. If you're hearing about the bio labs it was me,” Creech said during a February 26 appearance on the show. He also promoted the theory, under his alias BioClandestine, during a March 15th appearance on election fraud conspiracy theorist Seth Holehouse’s show Man in America, saying, “they're trying to establish a narrative that Russia is going to be the one releasing these biological weapons after they said there were no biological weapons in Ukraine. So now they're in this mass cover-up phase.” 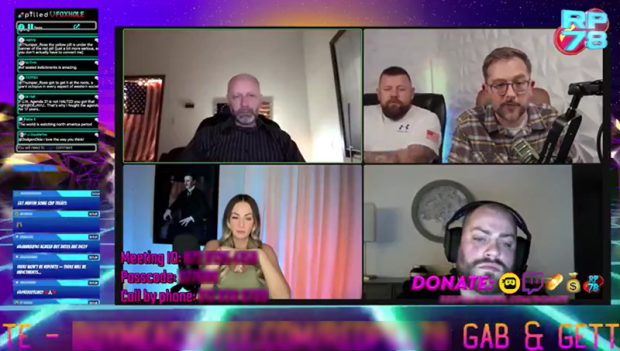 Creech has attempted to distance himself from QAnon, criticizing news reports that refer to him as a “QAnon influencer.” A review of Creech’s prior social media activity, however, shows he’s been following Q since 2018.

Creech previously tweeted other conspiracies under the monikers “Clandestine Rosenstein” and “Sneaky Rod,” positing that then U.S. Deputy Attorney General Rod Rosenstein was a secret “white hat” in Trump's war to take down the “Deep State.” Rosenstein, who appointed Robert Mueller to lead the Russia probe, was a frequent target of “Q,” who accused him of trying to “entrap” Trump by secretly recording him in the White House.

“RR [Rod Rosenstein] has been Team Trump since April 2017 when Trump appointed him,” Creech tweeted in April 2020 under the handle @arbiter1776. “All RR has done is prove Trump right, CONFIRM the Russia conspiracy allegations were false, and expose bad actors like McCabe and Comey.”

Creech has repeatedly invoked “Q” over the years. In 2018, he tweeted from his @ClandestineRos1 account, “There are many stances on Q, but we cannot deny the reality and magnitude of the movement.” In 2020, he tweeted under @arbiter1776, “... what is our role as Anons to assist the Q team and carry on The Great Awakening? It is our personal responsibility to be informed.” Creech also appeared on RedPill78 in November 2020, under his alias Clandestine Rosenstein, just a few weeks after the election, where he, alongside host Zak Paine and fellow QAnon influencer Beer at the Parade, peddled false claims that the 2020 presidential election was “stolen.”

He has also allegedly called for various public officials to be executed. Replying to a February 2022 tweet from the Ottawa Police thanking GoFundMe for withholding funding from the Trucker’s Convoy, he wrote, “Don’t worry Ottowa [sic] police. We got enough rope for your fascist asses too. When all is said and done, you’ll be swinging with the rest of them.”

The biolabs conspiracy isn’t the first time that Creech has spread misinformation on Twitter. In July 2019, Creech, tweeting from his @RodSneaky account, alleged that the media was not reporting on the NXVIM sex trafficking case. While the @RodSneaky account was suspended by Twitter shortly after for "platform manipulation and spam,” screenshots of Creech’s tweets continued to circulate online, prompting Reuters to publicly debunk the claim.

As the war in Ukraine rages on, the biolab conspiracy has quickly emerged as the prevailing narrative among QAnon adherents to explain Russia’s invasion of Ukraine. Not only does it “justify” the invasion in their eyes, it also validates their belief that Covid-19 is a U.S.-created bioweapon. This flood of disinformation could have far-reaching implications in the long term, sowing further distrust in democratic institutions and exacerbating political polarization.