Ye continues to double down on his antisemitic rhetoric. For a deep dive on Ye's latest antisemitic remarks, the tropes he continues to amplify, and his history of espousing conspiratorial views, view our "Ye (Kanye West): What You Need to Know" resource here.

Ye continues to amplify antisemitic tropes and conspiracy theories. During an interview on Revolt TV’s “Drink Champs” series that was posted and then removed on October 16, Ye repeatedly blamed “Jewish media” and “Jewish Zionists” for numerous alleged misdeeds, stating that “Jewish people have owned the Black voice” and that “the Jewish community, especially in the music industry…they’ll take us and milk us till we die.” Referencing Nation of Islam leader Louis Farrakhan, he also commented that he was “#MeToo-ing the Jewish culture. I’m saying y’all gotta stand up and admit to what you been doing.”

Ye doubled down on his antisemitism during an October 17 interview with Chris Cuomo on NewsNation, criticizing the so-called “Jewish underground media mafia” and alleging that “every celebrity has Jewish people in their contract.” He also claimed that his life was threatened by his Jewish managers, lawyer and accountant due to his political beliefs. On both “Drink Champs” and “Cuomo,” Ye repeated his previous defense that Black people cannot be antisemitic, stating that “we are Semite, we Jew, so I can’t be antisemite.”

On October 6, Ye joined Fox News’ Tucker Carlson after his decision to wear a “White Lives Matter” shirt at Paris Fashion Week garnered heightened media attention. During the interview, some of which was not aired on Fox that evening, Ye made a series of offensive and conspiratorial claims about Jewish people and Jewish identity. Ye claimed that Jews are actually Black people, saying that when he refers to Jews he means “the 12 lost tribes of Judah, the blood of Christ, who the people known as the race Black really are [sic],” and posited that Planned Parenthood was the product of a collaboration between the KKK and Margaret Sanger “to control the Jew [i.e. Black] population.” He also said that it is impossible for him to be fairly described as antisemitic, because as a Black person he is actually a Jew.

Ye also told Carlson that he believed Jared Kushner only arranged peace agreements between Arab nations and Israel “to make money.” At another point, Ye stated that he wished his children had learned about Hannukah instead of “a complicated Kwanzaa,” because Hannukah would at least “come with some financial engineering.”

The next day, Ye shared screenshots of text messages on Instagram insinuating that Jews are using their purported control over his peers in the music industry to intimidate him and defiantly said that “no one can threaten or influence me.” The post has since been deleted.

Ye also said that Jewish people “toyed with” him, and that they “tried to black ball anyone who opposes” their “agenda.” This tweet, in which Ye ominously referred to going ‘death con 3 on JEWISH PEOPLE,” raising the specter of violence, was later removed by Twitter. 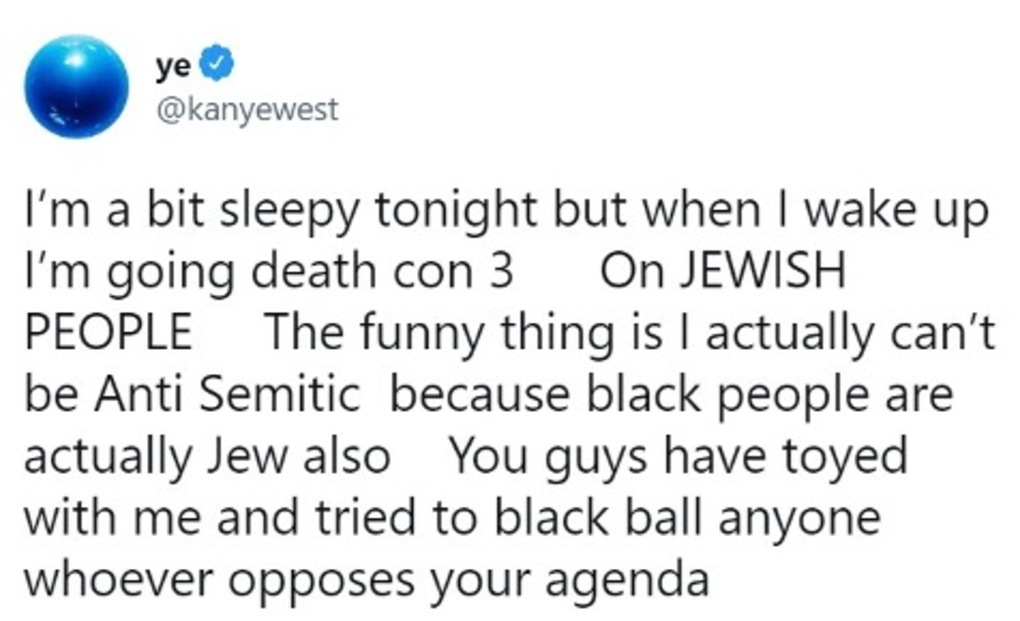 While Ye has been no stranger to controversy and antisemitism in recent years, this dangerous rhetoric may help advance the spread of existing false and antisemitic narratives shared by extremist groups.

There is no evidence that Ye views himself as a member of any organized extremist group, but his recent remarks are reminiscent of popular tropes espoused by antisemites, including his claim that Black people are Jews and cannot be antisemitic.

The belief that Black people – rather than Jewish people today – are the true descendants of the biblical Israelites is common among followers of the Black Hebrew Israelite (BHI) movement. BHI adherents, who reject Judaism and are not the same as Black Jews or Jews of color, refer to themselves as the “true Jews” to emphasize this distinction. This belief implicitly calls into question whether modern Jews, of whom only a minority are people of color, have any historical relationship with the ancient Israelites described in the Bible.

Some BHI sects are openly antisemitic and extremist, and adherents state explicitly that members of the mainstream Jewish community are “imposters” or “fake Jews” who have used trickery and other nefarious tactics to convince the world that they are the legitimate children of Israel and to steal the religious heritage of Black people. Many proponents of this “fake Jews” narrative believe that modern Jews are part of a global conspiracy to oppress non-Jews.

Ye’s claim that Planned Parenthood was created as part of an effort to control or harm the Black/Jew population has also been promoted by antisemites, and bears resemblance to other existing conspiracy theories about Planned Parenthood. The Nation of Islam, for example, regularly promotes the belief that the U.S. government and Jewish people have collaborated on a “depopulation agenda” against Black people. The NOI has specifically criticized both Sanger and Planned Parenthood for their alleged role in this so-called “agenda.”

Ye also invoked the antisemitic belief that Jewish people are disproportionately powerful and that they control the media, including the music industry. This trope has been present in the discourse of other Black performers and activists in the past and is a common talking point within more extremist groups, as evidenced by narratives promoted by the Nation of Islam. This trope is not unique to NOI, but has been repeatedly promoted by its notoriously antisemitic leader Louis Farrakhan.

Among Farrakhan’s most frequent antisemitic claims during his 40-year tenure as the NOI’s leader is the accusation that Jewish people control the entertainment industry — especially rap and hip hop artists — and use that purported control to exploit Black artists and promote immoral, harmful behaviors to Black people, which he regularly mentions in his speeches. The NOI’s Final Call newspaper has also published a number of articles over the years highlighting the alleged “iron grip that Jewish businessmen have on our most popular and talented Black artists” and defending Ye for standing up to this so-called “Jewish power.”

Claims About Jewish Money and Greed

Ye’s claim that Jared Kushner’s actions between Israel and Arab nations was driven by his desire for financial gain corroborates long-standing antisemitic tropes about alleged Jewish control of money and financial institutions. His vague suggestion that a prominent Jewish holiday is associated with “financial engineering” also reinforces this stereotype. Overall, Ye's suggestions about Jewish people, holidays and the monetary implications of the two lends credence to the baseless idea that Jews can leverage their power for insidious purposes because of the stronghold they have on financial institutions.

Past Remarks and Association with Known Antisemites

Ye has made statements about Jewish power in the past, including remarks in 2013 alleging that Jewish people are more well-connected than Black people and therefore have an unfair advantage. These were denounced by the ADL and later defended by Farrakhan, who stated that Ye “told the truth” and “said nothing wrong.” During a concert shortly after the 2013 controversy, Ye reportedly stated: “I talked to Farrakhan the other night, he told me not to apologize. I ain’t finna apologize.”

Ye and Farrakhan have expressed mutual respect and support for one another on other occasions, as well. In 2005, Ye visited the NOI’s headquarters at Mosque Maryam in Chicago to publicly express his support for the group’s Millions More Movement. Ye’s 2015 song “All Day” includes a lyric which describes Farrakhan as “sensei.” Also in 2015,  Ye attended an event that Farrakhan held in Los Angeles. Farrakhan defended Ye again in 2018 after the latter had drawn criticism for his political stances.

After Ye’s most recent remarks, prominent conspiracy theorists, extremist groups and antisemitic influencers were quick to leverage his words to both express support and promote their own beliefs.

A Twitter account that appears to belong to a conspiratorial and antisemitic NOI social media influencer, Rizza Islam, posted: “The same ones who terminated #KanyeWest from #Twitter are the same ones who were involved in the enslavement of our people,” going on to argue that they owe Black people “#reparations for the evils that they have done to our ancestors.” Rizza Islam has previously promoted the claim that Black people cannot be antisemitic because they are the “true Jews” or “true Hebrews.”

During an appearance on the Hip Hop News Uncensored podcast, NOI Executive Council Member and Student Minister Wesley Muhammad stated that “Kanye West is speaking a lot of truth right now and he’s triggering a very dangerous enemy…I see him – with good reason – threatening to go DEFCON 3 on Jewish execs of Hollywood. Jewish execs of Hollywood are those who are the Wizards of Oz, responsible for the carnage that has become hip-hop and has become Black life as a result of the commandeering of hip-hop.”

In a separate episode of the same podcast, NOI Student Minister Nuri Muhammad also defended Ye, stating that Black people “are the real Semite, so to be antisemitic means to be anti-yourself. The thing that happens is they use this term as a way of muzzling and shutting people and putting you really into a social prison by which you will never have a platform to express yourself.”

During a livestream on October 10, leaders of the Israelite School of Universal Practical Knowledge (ISUPK), an extremist BHI sect, defended Ye and tied his comments to the group’s teachings about Black people being the “true Jews.” Members of the Kansas City chapter of Israel United in Christ (IUIC), another extremist BHI sect, also reacted to Ye’s comments during a livestream, rejecting the widespread accusations that his statements were antisemitic: “These Ashkenazi Jews, or Ashkenazi Edomites, they’re not Jews. They’re not the Jews! You understand? So then to say [Ye is] ‘antisemitic’? He’s Semitic!”