U.S. and U.K. Soccer Teams Join Forces for "The Final Whistle on Hate" 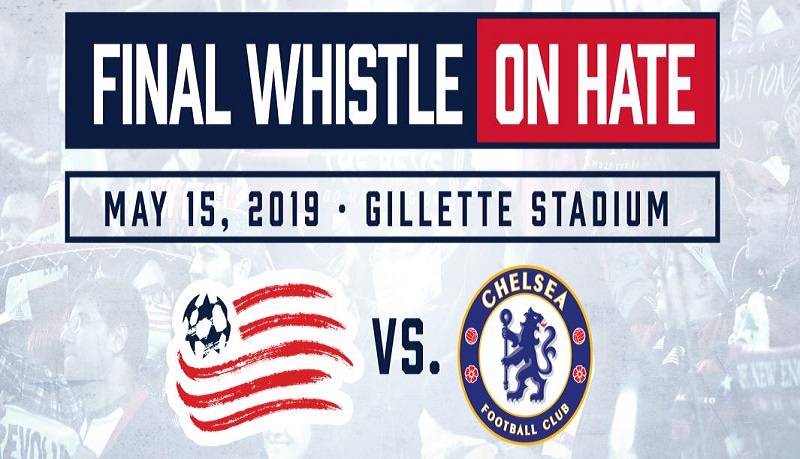 Two world-class soccer teams from two continents will be joining forces on the playing field on Wednesday to do battle against a common foe: Hate.

On May 15, 2019, the Chelsea Football Club, a popular UK soccer team, will visit Foxborough, Massachusetts for an exhibition match against the New England Revolution at Gillette Stadium.

Unlike traditional soccer matches, which are solely about competition, this event has an equally important purpose: to raise awareness about the rise of anti-Semitism, racism and other forms of hate across the world, including within the sporting world.

Labeled “The Final Whistle on Hate”, the match is part of Chelsea’s ongoing “Say No To Anti-Semitism” campaign, conceived a year ago by Chelsea and Revolution team owners in an effort to stamp out hate.

Their initiative aims to raise awareness about anti-Semitism and its impact on the global Jewish community and society as a whole.

All of the event’s proceeds, including $1 million each pledged by the owners of Chelsea and New England Revolution -- Roman Abramovich and the Kraft Family, respectively -- will go to fund projects promoting equality and acceptance at ADL (Anti-Defamation League) and other organizations engaged in the fight against anti-Semitism and hate in all forms.

“Professional athletes are often looked up to as role models for the younger generation, so they have an important voice when it comes to taking a moral stand,” said Jonathan A. Greenblatt ADL CEO and National Director. “We cannot fight hate without willing partners. That’s why we are so fortunate to have two world class teams getting together to both raise money and awareness of the problem of anti-Semitism in sports and broader society and to take a public stand against hate in all forms.”

“The partnership with Revolution and the match in Boston forms part of a wide range of activities Chelsea FC have carried out since we launched our dedicated campaign to tackle anti-Semitism,” said Bruce Buck, Chairman of Chelsea FC. “Soccer is the world’s most popular sport, week in and week out, millions of people of different ages and backgrounds flock to watch their idols and passionately support their team. The club and Mr. Abramovich are committed to using the power of soccer to make a difference. We are thankful to be partnering with the ADL who have been leading this fight for decades, by combining our resources and expertise, I am confident we will be able to have an even greater impact.”

There’s been a sharp rise in anti-Semitism in the U.S. and in the UK during the past few years.

In 2018 alone, there were nearly 1,800 anti-Semitic incidents in the U.S., making it the third-highest year on record in terms of anti-Semitic acts, according to the most recent ADL data.  Last year also witnessed the deadliest anti-Semitic incident in U.S. history with the murder of 11 worshipers at Pittsburgh's Tree of Life Synagogue in October. And just last month, a white supremacist attacked the Chabad of Poway synagogue near San Diego, killing one and wounding four others.

In the sporting world, the scourge of anti-Semitism and other forms of hate has similarly been a serious concern. Here in the U.S., racism in sports remains an ongoing concern for fans and players, as evidenced by a rise in incidents. Things are even worse in Europe, with the FARE Network (“Football Against Racism in Europe”) reported more than 30 hate incidents at soccer matches alone in March of this year. Nazi salutes, chants about Jews being gassed or burned in ovens, and banners with anti-Semitic caricatures are just some examples of how anti-Semitism has manifested in the football world.

Fortunately, many communities are refusing to turn a blind eye to these trends. In Boston, for example, following vile and racist heckling from sports fans, the city’s major sports teams joined together with the NAACP to launch an initiative called “Take the Lead” in order to stand up to racism and hate speech. Similarly, Chelsea’s “Say No to Anti-Semitism” campaign in Europe was born in response to repeated incidents of fans engaged in anti-Semitism and other forms of racism against their rival teams.

Recognizing that much work still remains to be done in the battle against anti-Semitism, ADL and Chelsea Football Club have joined together in two additional areas to fight this millennia-old hatred. Thanks to Chelsea’s generosity, ADL’s Center on Extremism, which investigates extremism on the far left and far right, will now be able to expand its ranks and engage additional analysts to track, monitor and analyze hate and extremism through research, reporting and programming. ADL will also bring its signature No Place for Hate anti-bias curriculum to schools in the UK in an effort to reach students in London schools. This effort seeks to both address head-on the surge of global anti-Semitism and other forms of hate, and use education to promote anti-bias, tolerance and respect among the next generation of Britons.

Sports is often described as a singular platform which can unite people from all races, religions, socio-economic statuses and political persuasions. On May 15, these two teams will have the opportunity to come together in this spirit of friendly competition, and collectively declare their rejection of anti-Semitism, hate and bigotry in sports and across our society, and wherever else it may rear its ugly head.

Anti-Semitic Incidents Remained at Near-Historic Levels in 2018; Assaults Against Jews More Than Doubled