“Venerating the Housewife:” A Primer on Proud Boys’ Misogyny 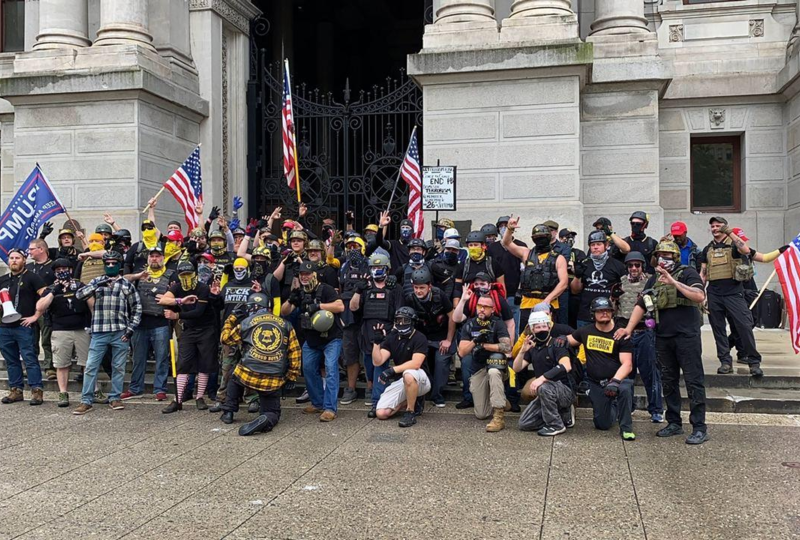 Members of the Proud Boys gather in Philadelphia

The Proud Boys claim to “venerate the housewife.” And while the right-wing extremist group insists this is meant to convey respect for women who take on “traditional” gender roles, a closer look at the Proud Boys’ rhetoric and actions, especially in online spaces, reveals the troubling layers of this statement, and the group’s true attitude towards women – which closely parallels the explicit misogyny embraced by white supremacists and other right-wing extremists.

In the May 2020 words of Proud Boys founder Gavin McInnes, “venerating the housewife” means “women who chose to be housewives and mothers should be celebrated for that choice.” While McInnes also wrote on Telegram in May 2020 that the Proud Boys do not see being a housewife as the only “valid” choice for women, and in fact “many of our wives are very successful career women,” in practice, commentary and actions from chapters and prominent group members frequently belie this more progressive stance.

In the Wisconsin chapter’s Telegram channel, for example, the group posted in February 2020, “We venerate the housewife. Our wives are happier than any of these barren career cat ladies.” This glorification of traditional notions of womanhood while denigrating women who do not fit the stereotype, while simultaneously claiming to support women’s career aspirations, appears to be a characteristic effort by the Proud Boys to muddy the waters. They claim that Proud Boys are just supporting the choice of some women to be “housewives,” but the reality is that the Proud Boys view women much in the same way as white supremacists and elements of the online misogynist manosphere do: undeserving of the same status as men, worthy of ridicule for deviating from traditional gender norms, objectifiable in some instances to serve men, and worthy of protection in others -- as long as they fulfil deeply antiquated gender roles in the service of preserving “western” society.

Why is this dangerous? Because Proud Boys consistently attempt to present themselves as “patriots” and defenders of “conservative” values, sidestepping the extremist label, and thereby making their views more palatable to a wider audience than those of, say, white supremacists.

McInnes, who is no longer officially associated with the Proud Boys, has opined frequently on women and their role in society; in a YouTube video from 2018, he endorses “enforced monogamy,” refers to several women journalists as “spinsters” and "a colostomy bag for various strangers' semen.” In 2016, McInnes penned an article for the online publication Taki’s Magazine called “Feminist Witch Hunts are Rape” in which he called public allegations of rape made by women without an accompanying criminal case “a new Sharia court the feminists have invented, and for no good reason.” McInnes wielded considerable influence over the Proud Boys and their ideologies, and his opinions helped shape the group’s thinking about women.

Individuals still involved with the group have even worse track records on the subject. Joe Biggs, who remains one of the Proud Boys’ most influential members, tweeted highly offensive content, since deleted but recorded by Media Matters, including “Every kiss begins with...Roofies” (a reference to rohypnol, otherwise known as the “date rape drug”) on August 14, 2012, and “I like to reason with her (reason= chloroform)...” on March 5, 2012. According to 2017 reporting by Raw Story, Biggs claims these tweets were posted at a dark time in his life and do not reflect his current state of mind. Biggs is currently facing federal criminal charges for his alleged role in the January 6, 2021, insurrection. Enrique Tarrio, the current chairman of the Proud Boys national organization, frequently posts to Telegram asking followers for donations to cover Biggs’ legal fees.

Today, Proud Boys’ misogyny goes deeper than influential members making disturbing comments. The group as a whole praises one hyper-idealized version of womanhood and demonizes any deviation from this. In April 2021, the Ohio Proud Boys shared an article from Slate magazine entitled “Dear Care and Feeding: I Absolutely Hate Kids. Can I Just Ignore My Friend’s New One?” alongside the caption, “Women like this, are the root of all evil.”

More broadly, Proud Boys do not see even the women who are most sympathetic to their ideology as equals, and they certainly are not permitted to join the organization.  A group of women who dubbed themselves “Proud Girls” have existed informally, including on social media, since 2016. The Proud Boys’ response to this offshoot, however, has been decisive. They stated in a Telegram post from the official Proud Boys Telegram channel: “Proud Girls are non existent [sic]. We don’t recognize them. They are in no way connected to us.” When women reach out to chapters directly, the Proud Boys respond, “This is a men’s club. We do not have women members or a Proud Boys’ Girls chapter.” They have posted these exchanges to their chapter Telegram channels, so that even more followers see the message.

Many of these women have posted in support of the Proud Boys and marched with them. Felicia Konold, for example, is alleged to have marched with Proud Boys on their way to the Capitol and has since been criminally charged and indicted for her alleged role in the insurrection. When the press tried to make the connection between Felicia Konold and the Proud Boys, the Oklahoma Proud Boys shot back on Telegram, “Cory and Felicia Konold of Arizona... So, a men’s club is allowing women in? Even though the idea of it was trolled to death?” In this effort to attack the legitimacy of the accusations against the group during the insurrection, Proud Boys mock the idea that a woman could join their organization – even a woman apparently invested in their cause and culture. 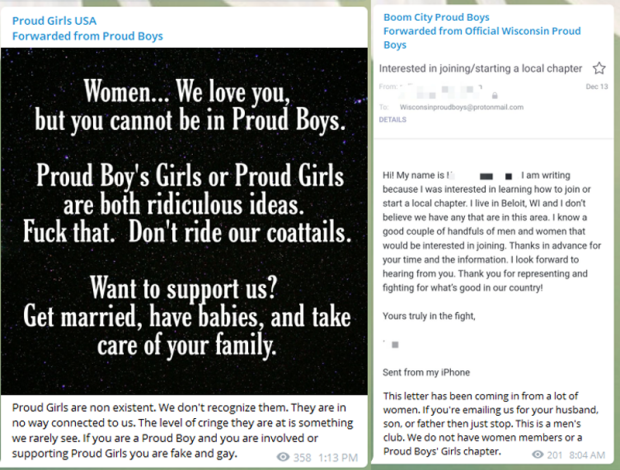 While the Proud Boys do not want women in their club, in June 2020 they set up on their official website a now-defunct page titled “Repopulate the West” to act as a Proud Boys dating site where women could meet local Proud Boys. The page was advertised via the official Proud Boys Telegram channel, captioned on separate occasions with “SEND NUDES” and “SEND BOBS & VAGENE” -- ostensibly to elicit nude photographs. Women were also encouraged to support the Proud Boys by wearing a shirt from the group’s official website, announcing, “I would fuck the Proud Boys.” The shirt was still available for purchase as of August 1, 2021. It is clear that you can be a female for Proud Boys, but women, even those sympathetic to the cause, will never be seen as equal to Proud Boys. Further, women are objectified by these efforts and both the “dating site” which featured a lewd image pictured below, and this kind of merchandise highlights that the Proud Boys see women as available for their “use,” but not as humans of equal value. 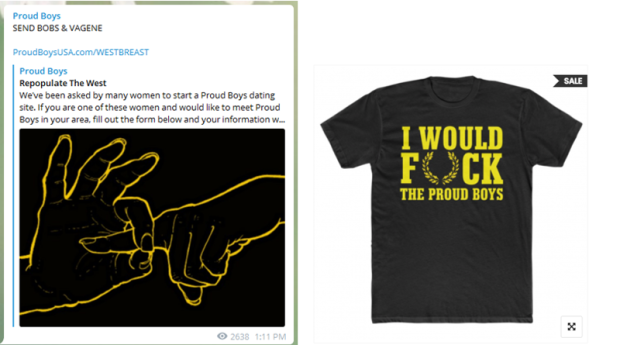 The more a woman deviates from the Proud Boys’ version of ideal femininity, the more targeted the vitriol gets. The Minnesota Proud Boys came right out and denied the equality of women in March 2020, posting to Telegram: “Women are not equal, until they are no longer a protected class.
Bet you never see a feminist advocate for that.” Feminists are the frequent targets of hateful posts, as are women involved in or interested in politics, especially when they express beliefs that conflict with Proud Boys’ views. In May 2021, the Ohio Proud Boys posted the following image of a woman protesting with a “Defund police” sign. Their caption claims the woman pictured has “limited abilities to use reason and logic” is “driven completely by emotion,” and cannot comprehend that “The police are literally the only thing standing in the way of her getting raped to death.” 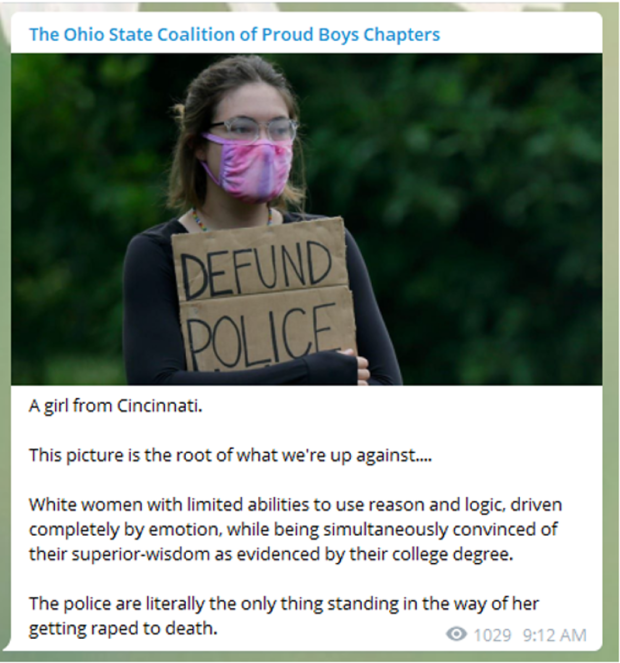 Increasingly, since the January 6 insurrection, there has been factionalizing within the Proud Boys. Some chapters have declared autonomy from the national group, mostly in response to allegations that the Proud Boys national chairman, Enrique Tarrio, was alleged to be an FBI informant. There is another disturbing trend, however, of overtly white supremacist and antisemitic Proud Boys offshoot Telegram channels. The most popular is The Western Chauvinist, which is run by self-proclaimed “3rd and 4th degree Proud Boys in good standing” and has more than 48,000 subscribers.

This channel recently promoted White Lives Matter rallies, celebrated Hitler’s birthday and posted a poll about Holocaust denial, among many other deeply racist, antisemitic, anti-LGBTQ+ and anti-immigrant posts. Unsurprisingly, their overt racism often targets women of color. The example below is a response to a protest against police brutality in April 2020 highlighting that while the Proud Boys as a whole are misogynist, this white supremacist faction reserves explicit and particular vitriol for women of color.

The perceived threat of women who are different from the Proud Boys’ ideal permeates throughout the entire organization, not just its offshoots. The Western Chauvinist channel has also reposted a disturbing video (also shared separately by the Houston Proud Boys Telegram Channel) which claims that “White woman [sic] of child baring [sic] age are only 2% of the world population but they are encouraged to race mix, told they have White privilege and blamed for everything.” 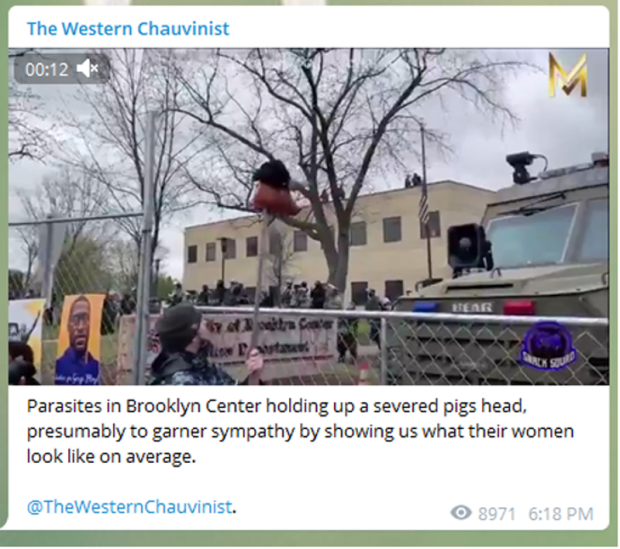 As ADL has written previously, “there is a robust symbiosis between misogyny and white supremacy.” On the left is a post from a white supremacist and accelerationist Telegram channel featuring a quote from Joseph Goebbels, chief propagandist for the Nazi party. The post on the right is from the white supremacist Proud Boys offshoot channel The Western Chauvinist which features a take on the 14 words (a popular white supremacist slogan) “to secure that existence for the future.” 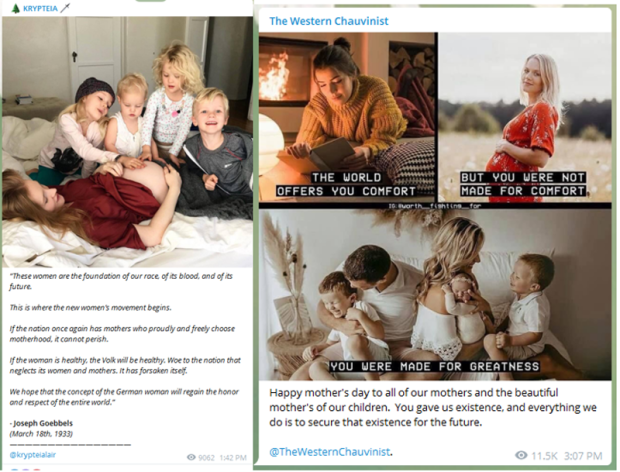 The post on the left, from an explicitly white supremacist Telegram channel, is virtually indistinguishable from the post from the Proud Boys offshoot channel on the right. They use the same imagery, include racist captions and exemplify one of the Proud Boys’ stated ideals: venerating the “housewife,” whose express purpose is to bear children and keep a lovely home for her husband. With this they are also perpetuating dangerous and patriarchal white supremacist ideals around white women producing white children and promoting the conspiratorial view that immediate action is necessary to save the white race from extinction at the hands of non-white “hordes.” Misogyny and white supremacy are often inextricable, and the Proud Boys (and their offshoots) powerfully illustrate this intersection.