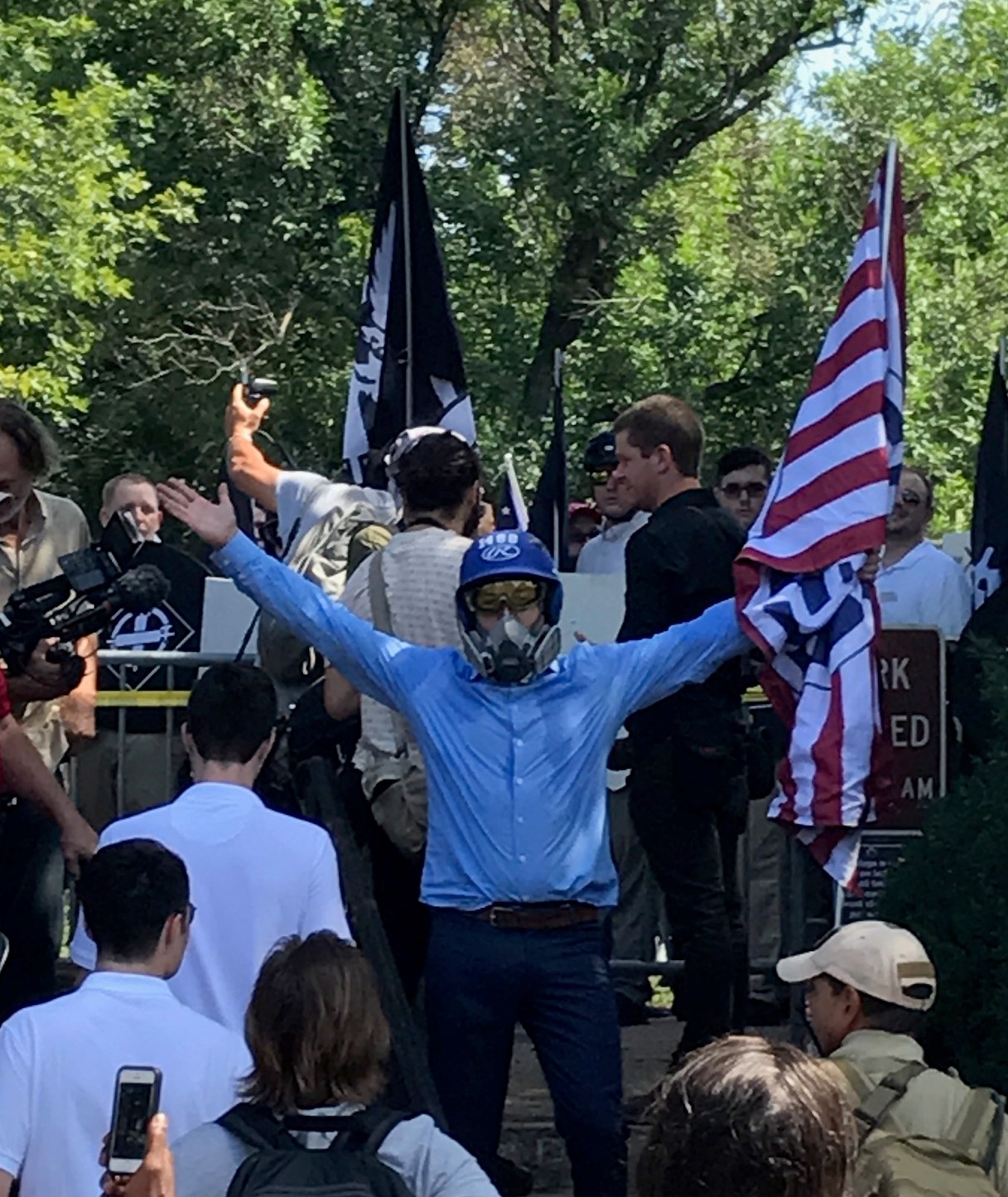 William Fears of Alt Right Texas, with "1488" on his helmet

On Friday afternoon, over the objections of the Charlottesville city council, Unite the Right organizer Jason Kessler secured a permit to gather in one of the typically bucolic college town’s many parks, ostensibly to protest the removal of a statue of Confederate general Robert E. Lee.  Instead, violent skirmishes broke out and one person was killed after being hit by a speeding car. 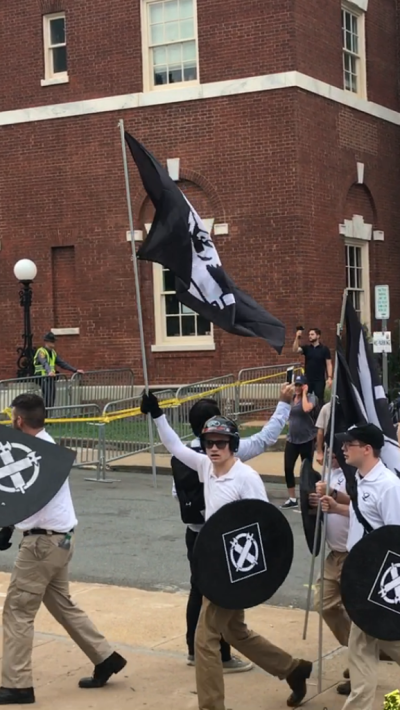 In the hours before the rally was slated to begin, a number of clashes erupted between white supremacists and counter-protesters, police in riot gear stepped in, and Virginia Governor Terry McAuliffe declared a state of emergency in Charlottesville and the surrounding county.  Police moved in to disperse the crowds.

As protesters and counter-protesters began to leave the area, someone drove a car at high speed into a crowd of counter-protesters, and then quickly reversed back out. The crash left one person dead, and as of Saturday evening at least 19 additional people were being treated for injuries. On Saturday evening, police arrested James Alex Fields, Jr., of Maumee, Ohio, and charged him with second degree murder, failure to stop after an accident that resulted in death and three counts of malicious wounding. 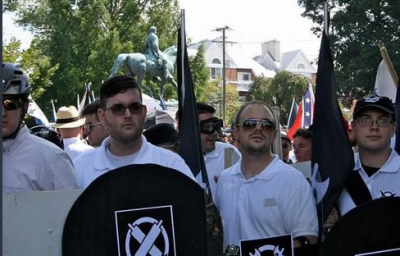 Fields, 20, rallied on Saturday with members of the white supremacist group Vanguard America, holding one of the organization's shields. VA believes that America should be an all-white nation, and share much of the neo-Nazi ideology. Their primary logo depicts an eagle carrying a bundle of sticks (a fascist symbol called the fasces), but a secondary logo -- of two crossed fasces -- may also be used. In a statement released Saturday, VA denied that Fields was a member of the group.

Saturday’s fiasco followed a Friday evening tiki torch-lit march through the University of Virginia’s campus, led by Richard Spencer and other alt right leaders. Marchers shouted, “You will not replace us,” and “One people, one nation, ban immigration!”  Both are references to what white supremacists call “white genocide,” the idea that white people are being wiped out by non-white immigration. Friday evening’s event, which was reminiscent of Nazi torch rallies of the 1930s and ‘40s and a clear act of attempted intimidation, ended when some of the 200 or so marchers clashed with counter-protesters. 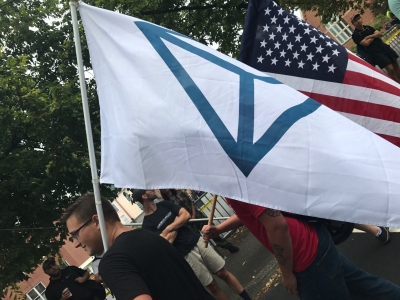 The assembled white supremacist groups ranged from traditional (Ku Klux Klan) to neo-Nazis (National Socialist Movement) to the alt right (Identity Evropa). Other groups with a significant presence include the League of the South, Vanguard America, the Traditionalist Worker Party and the Fraternal Order of Alt Knights (the “military” wing of the Proud Boys). Gavin McInnes, the leader of the Proud Boys, insists his organization is not racist, and has threatened to expel any member who stands alongside white supremacists.

The size and scope of the white supremacist crowd in Charlottesville illustrates how successfully the alt right has brought together various strains of white supremacist ideology. Many of Saturday’s rally-goers were young men, which means the movement seems to be attracting a highly desirable demographic, essentially ensuring the ideology’s future.

The white supremacists marched through the streets of Charlottesville, shouting obscenities at crowds of protesters and shouting, “Hail Trump,” “Blood and Soil!” (from the Nazi-era slogan “Blut und Boden”) and “You will not replace us!” Others yelled, “Love your people!” and “Race Traitors!” at white counter-protesters.

They carried homemade shields, Nazi flags, Confederate flags, and, in some cases, guns, which are permitted under Virginia’s concealed carry laws. Some wore swastika armbands. 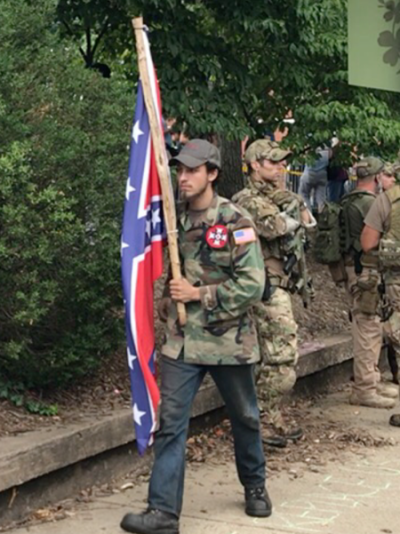 David Duke and Mike Enoch, the founder of the racist and anti-Semitic website The Right Stuff, told reporters they shouted “The goyim know,” which refers to an anti-Semitic trope about Jews trying to keep non-Jews “in the dark” about their plans.

Despite their failure to actually hold a rally, the mood on Saturday afternoon among white supremacists was largely upbeat – even ebullient.

Andrew Anglin of the Daily Stormer, who is in hiding because he is being sued for harassment, said he was dumbfounded but ecstatic following the day’s events. “If the rally had gone through as planned,” he wrote on the Daily Stormer, “that would have been a massive victory. But this. This is a bigger victory than we ever could have hoped for.”

By early evening, some on the extreme right had already begun to dismiss the car crash and the presence of Nazi paraphernalia as false flags dreamed up by “the Jews” and other members of the so-called “deep state” to promote distrust of white people.

Throughout the day Saturday, elected officials nationwide took to Twitter denouncing the white supremacists and calling for peace.

Unite the Right is over, but it’s clear Charlottesville remains in white supremacists’ crosshairs: After the police broke up the Saturday’s event, Richard Spencer filmed himself leaving the scene after allegedly being sprayed with some kind of chemical. He said he was “outraged” by the behavior of the “militarized police,” and vowed to return to Charlottesville “a million times.”