As War Raged, Sparks of Light as Israeli Jews and Arabs Said No to Hate 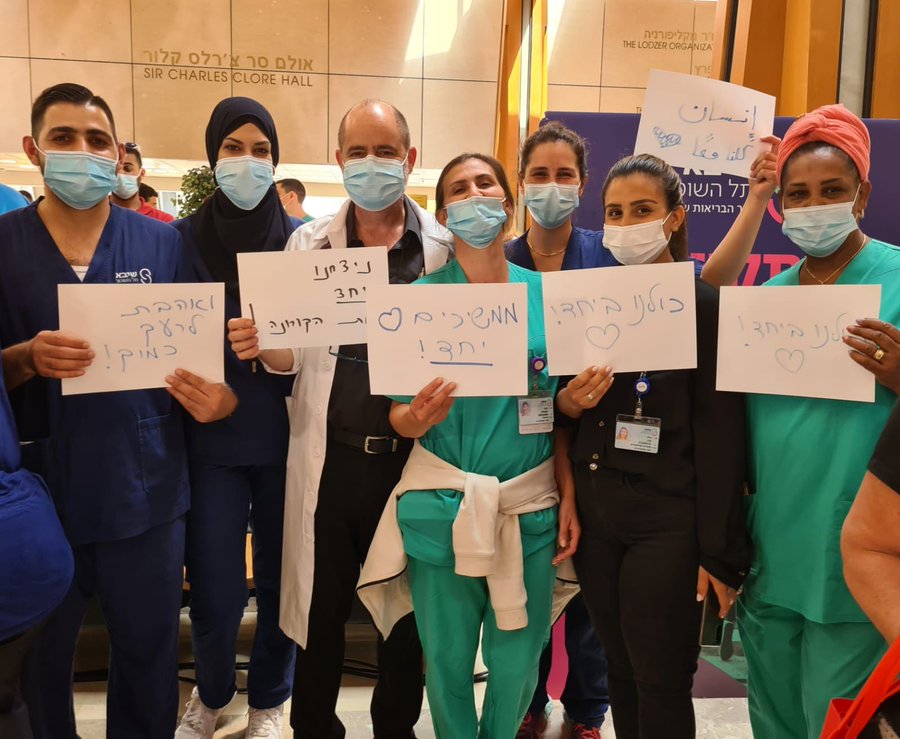 As the tenuous ceasefire between Israel and Hamas takes hold, Israelis – Jew and Arab - are facing the “day after” and the critical work of healing and repair that needs to take place within its own society and citizenry.

As thousands of Hamas rockets sent Israelis fleeing for shelter over the course of the eleven-day conflict, another wound has been opened within Israeli society: nights of violence, looting and horrifying expressions of hatred by Arab and Jewish extremists in Israeli cities with large communities of both Jewish and Arab residents.

But while these incidents of marauding extremists threatened the fragile social fabric of Israel’s diverse society, there were significant sparks of hope, with many Israelis, Jews and Arabs, religious and secular, Ashkenazi and Mizrahi, saying, “Enough is enough!” Amidst the despair of war, people of all religious and political stripes in Israel came together to stand up to hate. It is imperative that such courageous acts receive attention amidst the violence perpetrated by extremists, in order to remind us that the majority of the people of Israel are not extremists nor support acts of violence.

A sampling of such efforts include:

“Not in My Name” Campaign: Launched  across Facebook, with images of Israeli women holding their hands up with the message “not in my name” written in Hebrew, English or Arabic. “This was coming from an extreme desire, after seeing image after image of violent men in the streets as the face of the internal, civil, local uprising, and wondering if a female voice could not be a contrast to this,” Ariel Markose told the Jerusalem Post. “This was the focus of the campaign: the opposite image, the opposite message.”

A man killed by hate gives a woman a new hope for life: A kidney from an Israeli Jewish man killed by Arab rioters in Lod, was donated to an Arab woman at Jerusalem’s Hadassah Medical Center.   Randa Aweis, 58, an Arab Christian woman from Jerusalem, is recovering from the transplant.  As reported in the The Times of Israel, Aweis, who had long waited for a kidney donor, said: “This Jewish kidney has now become a part of me,” she said, offering condolences to Yehoshua’s family and declaring that she wants “peace between Jews and Arabs.” …. “We are like family now,” she said, lauding the “noble deed.”

Torah scrolls saved in Jaffa: According to a Facebook post from a rabbi in Illinois, a synagogue in Jaffa was set ablaze by a group of Arabs, but an Arab neighbor jumped in, saved the seven Torah scrolls, put out the fire and called the police.

Abu Ghosh bridge: In an op-ed for The Forward, Israeli photographer Laura Ben-David described how Jews and Arabs joined together on Thursday evening on a bridge outside Abu Gosh, “wearing jeans and T-shirts, dancing and singing, holding up their hopeful signs. ‘The solution to racism is cooperation between Jews and Arabs,’ said a purple one. ‘Women Wage Peace,’ was the blue. ‘B’yachad’ — Hebrew for ‘together.’”

“Hundreds of Jews and Arabs from the surrounding villages came together with music, dancing, flags and flowers — all to show that we refuse to hate one another,” Ben-David wrote.

Arabesque Hotel Acre: In a Facebook post, Evan Fallenberg, owner of a hotel in the Old City of Acre, wrote about how his business “fell to the hands of a violent mob, in spite of the best efforts of our neighbors, who deflected the attack time and again until the mob grew to fifty and there were threats to burn down the entire neighborhood.”

But despite his business being destroyed during the riots, Fallenberg broadcast a message of hope and resilience:

“It is not yet clear whether the people in this sad, beautiful, ravaged land can ever learn to respect the differences and distinctions between us and use them for an enhanced joint future, whether the wrongs committed by all parties can be righted. Only this, I know for certain: the friendships I have made in Acre are real and unassailable, even by hatred, anger and muscle. From this, I will build a future.”

A week after the incident, Fallenberg continued to reflect and commit to that future:

“During my days of mourning, I did not see how it would be possible to revive Arabesque under the shadow of such anger and hatred. And why bother, if this could happen again? But also during those days, I was buoyed by the extraordinary outpouring of support and love and encouragement from around the world and — most notably — from my Arab friends and neighbors. From everywhere, my son and I hear the same messages: We will clean up with you. We will donate. We will stay in the hotel when you reopen. For so many people, the death of Arabesque means admitting Jews and Arabs cannot live together. For so many people, including us, that is not a possibility.”

To be sure, these demonstrations of community and coexistence are anecdotes, and transforming these relationships to actual healing for the broader Israeli society will not be easy.  But as the fragile ceasefire holds, all Israelis will need to commit to this rebuilding and improving their society through greater social cohesion.