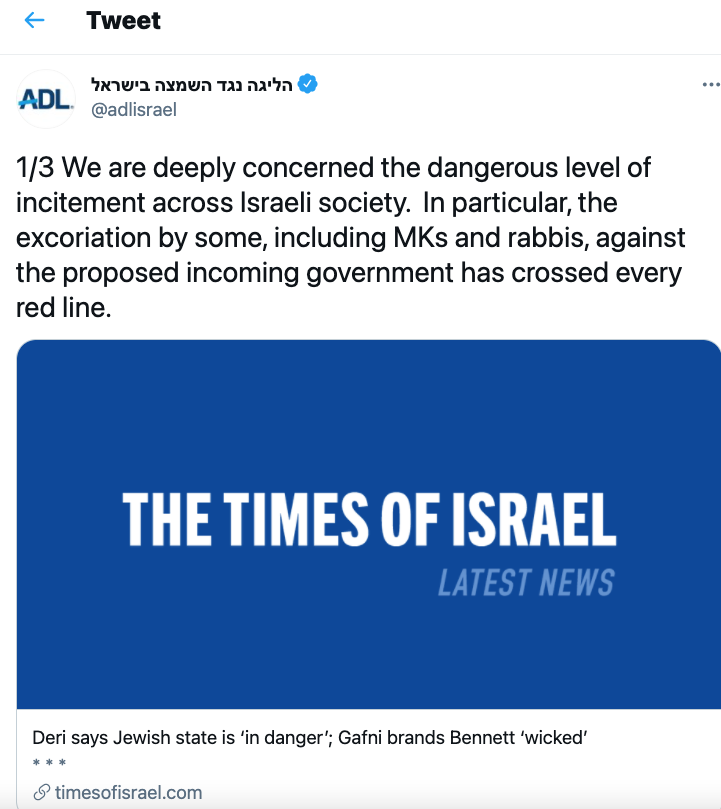 On June 13, 2021, a new Israeli government was sworn in, following a protracted political crisis that saw four elections in two years. The turmoil changed the political map in Israel and ultimately resulted in a new government – often referred to as the “change bloc” headed by Yamina Party leader Naftali Bennett and Yesh Atid Party leader Yair Lapid. The former is now Prime Minister, while the latter serves as alternate prime minister and foreign minister. They are expected to rotate in their positions later on.

In the lead up to this political transition, significant tensions related to the political situation have at times included highly inflammatory rhetoric, incitement and even death threats. Much of the incitement has been directed at Bennett, Lapid and other members of the change bloc by those opposed to the creation of this new coalition. It was seen as enough of a threat that the head of Israel’s General Security Services issued a rare public statement warning about the incitement, which led Israeli law enforcement to boost security around some of these politicians.

The problematic rhetoric has come from Knesset Members and others, including from supporters of former Israeli Prime Minister Netanyahu. Notably, this incitement included harsh religious rhetoric by some Haredi politicians and rabbis, some with large followings, who asserted that the forming of the government was a sin before God, and who publicly questioned the Jewish identity of some of the change bloc leaders.

Below are examples of the latest incitement:

In response, ADL forcefully denounced these and other instances of incitement, and, in the aftermath of the swearing in of the new coalition, will continue monitoring and reacting as needed. [link 1; link 2; link 3; link 4 in Hebrew; link 5 in Hebrew].