Weekend Clashes Emblematic of Political Violence Around the Country 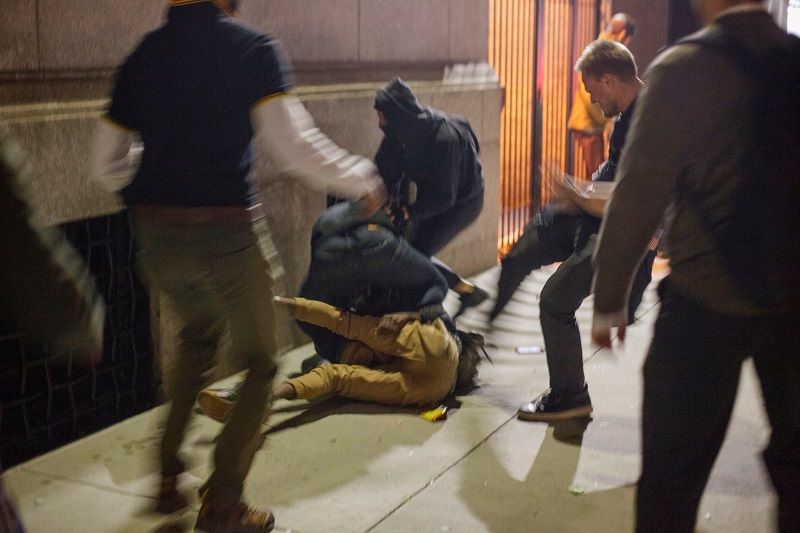 The divisive political discourse in this country is increasingly mirrored by violence in the streets. For some groups on the far right, violence has become a go-to tactic in their opposition to the left, and a crucial tool to promote their political and social ideology. For their part, some on the far left have adopted violence as a means of pushing back against what they feel are the encroachments of regressive and neo-fascist movements.

Together these impulses have contributed to a cycle of political violence which has resulted in physical injuries, shocking communities and further inflaming tensions in the political sphere.

Two incidents this past weekend in New York City and Portland, Oregon, are the latest examples of a resurgence of political violence between groups on the far right and far left around the country over the past few years.

On October 12, approximately 30 people, including members of the far-right group, Proud Boys, attended an event with their leader, Gavin McInnes, at the Metropolitan Republican Club on the Upper East Side of Manhattan. McInnes promoted the event on Instagram, where he said he would be reenacting the historical moment when the head of the Japanese Socialist party was assassinated using a samurai sword in 1960.

Also reportedly in attendance were members of the ultranationalist skinhead group, the 211 Bootboys.

Prior to event, unknown assailants vandalized the building with anarchist symbols, broke windows and left a note that read, “we put the Republican Party on notice, in defiance to the policy of mass misery they have championed,” adding that the attack “is merely a beginning.” During the event, counter-protestors gathered near the building, with some chanting “kill the Nazis.”

Although police generally kept the two groups separate before the event, at least one fight broke out before the men entered the club. After the event ended, videos of a group of apparent McInnes supporters beating up counter-demonstrators began circulating online. One of the men reportedly yelled an anti-gay slur.

By the end of the night, three of the counter demonstrators had been arrested. The NYPD has indicated they are looking to arrest nine Proud Boys on charges related to rioting and attempted assault.

The next day in Portland, violent clashes broke out between a group of Proud Boys and members of the far-right Patriot Prayer and left-wing counter-protestors, including antifa, outside a bar. Patriot Prayer organized a flash mob for “law and order,” which they billed as a response to law enforcement’s hands-off approach to an incident the previous week at a march in Portland against police brutality. Members of Patriot Prayer were upset that police did not intervene during an encounter between a 74-year-old driver and demonstrators.

For the Proud Boys, violence is an important tool for the promotion of their anti-left-wing agenda. At various times the leader of the Proud Boys, Gavin McInnes, has said that to become a full member of the group a person is required “to get beat up and kick the crap out of antifa.”

For its part, antifa, a loose collection of groups, networks and individuals who believe in active, aggressive opposition to far right-wing movements, consistently takes the bait by adopting a confrontational approach to the far right. Antifa rejects racism but often uses tactics such as violence to confront their opponents.

There have been many clashes with Proud Boys and antifa, as well as various other groups and collections of individuals who similarly support physical confrontation to settle their political differences. These clashes can create challenges for law enforcement trying to keep the peace between opposing factions. These violent activities also inflame the passions of their ideological opponents and can attract new activists to the causes they oppose.

Several incidents featuring violence by and between far right and far left groups have marked the current landscape. Below is a sampling:

Key Players in This Weekend’s Violence

The Proud Boys, founded in 2016 by Gavin McInnes, is a right-wing group that toes the line between the alt lite and the alt right. Proud Boys refer to themselves as “Western chauvinists” fighting the “forces of the left,” and earn status by performing rituals – some of which are violent.

At various times, McInnes has said that to become a full member of the group a person is required “to get beat up and kick the crap out of antifa.” In 2017, he said violence “is a really effective way to solve problems.” In response to the violence in New York City this past weekend, however, McInnes asserted on Newsmax TV that he doesn't “control these guys,” and “I'm the founder, not the leader.”

Proud Boys often attend rallies wearing black and gold Fred Perry shirts. Members of the Proud Boys’ “military wing,” the Fraternal Order of the Alt Knights (or FOAK), are difficult to distinguish from the groups’ general membership since they both have focused on street confrontations, a tactic that is increasingly popular among some alt right groups. The group is highly decentralized – while McInnes is the de facto leader, Proud Boys around the country act independently. Their online vetting process (which requires prospective members to provide recorded oaths) supplies ready-made propaganda that’s easily shared on social media.

The Proud Boys’ brand of far-right ideology includes elements of misogyny, Islamophobia, and in some cases racism and anti-Semitism. McInnes has said that Islam is “not a very good ideology” and referred to a town in upstate New York with a significant Muslim population as “an Islamic camp owed by a terrorist.” McInnes once told NBC “I’m not a fan of Islam. I think it’s fair to call me Islamophobic.”

Although McInnes has decried racism and anti-Semitism, he has made statements in the past that tell a different story. He has posted videos of himself giving the Nazi salute and repeatedly using the “N-word.” He was accused of anti-Semitism in March 2017, when he posted a video on Rebel Media called “Ten Things I Hate about Jews,” which was later retitled “Ten Things I Hate About Israel.”

While the Proud Boys often denounce white supremacy, their activity has attracted white supremacists who share their opposition to the left and seek to engage in physical confrontations. The Proud Boys participated alongside a variety of white supremacist groups during the 2017 protests at the University of California Berkeley, including members of the Rise Above Movement (R.A.M)., Identity Evropa, and the Traditionalist Worker Party (TWP). Similarly, members of Identity Evropa and TWP have joined Proud Boys and Patriot Prayer events in Portland. One man, wearing a patch for the Proud Boys associated Fraternal Order of alt Knights, attended the October 2017 neo-Nazi “White Lives Matter’ rally in Shelbyville, Tennessee. During the rally he taunted the counter-protesters by destroying an antifascist flag.

Members of the Proud Boys also attended the violent August 2017 “Unite the Right” white supremacist rally in Charlottesville, Virginia. Later they circulated an image of themselves in a celebratory pose with a flag they “captured” from antifascists.

Antifa is a loose affiliation of groups composed of activists who focus on harassing right-wing extremists both online and on the ground. Their presence at protests is intended to intimidate and dissuade racists, but the use of violent measures by some antifa members against their adversaries can create a vicious, self-defeating cycle of attacks, counter-attacks and blame. This is why most established civil rights organizations criticize antifa tactics as dangerous and counterproductive.

Antifa has expanded its definition of fascist/fascism to include not just white supremacists and other extremists, but also many conservatives and supporters of President Trump. At a protest in Berkeley, for example, some antifa members were captured on video harassing Trump supporters with no known extremist connections. Antifa has also falsely characterized some recent right wing rallies as “Nazi” events, even though they were not actually white supremacist in nature.

The Bootboys are an extreme right-wing, ultranationalist skinhead group which was started in 1999 and is active mostly in the hardcore punk and Oi! music scene in the metropolitan New York City region. They also claim to have members and associates elsewhere in the Northeast and Mid-Atlantic states. Many 211 Bootboys are white supremacists, but not all: the group has some members of Asian, Latino and African descent. Members tend to be staunchly nationalistic, anti-antifa (against left-wing anti-fascists), anti-communist, and sometimes Islamophobic, homophobic and anti-immigrant. Members will frequently get the number “211” tattooed on them and may also flash a “211” hand sign. In addition to recent violence in New York City by suspected members of 211 Bootboys, some members of the group were allegedly involved in another violent attack in February 2017. John Young, a 211 Bootboy from Washington D.C., was arrested in New York City and charged with assaulting two graduate college students on the Lower East Side. The violent assault was allegedly prompted because one of the students had an antifa sticker on his cell phone.

Patriot Prayer is a putatively religious far-right group founded in 2016 by Joey Gibson. The group claims to promote free speech while agitating against liberal Americans and progressive activists. Members have been involved in numerous skirmishes with left-wing protesters – confrontations that appear to be the group’s true primary objective. A number of Patriot Prayer members have been arrested during rallies, on charges ranging from disorderly conduct to assault. Gibson has organized several marches against “Sharia law,” including one in partnership with ACT for America, an Islamophobic group run by Brigitte Gabriel. He was detained by police in May 2018 after he and four others brought guns onto the University of Washington campus, apparently as part of a pro-gun demonstration. In February 2018, Gibson challenged Democrat Maria Cantwell for her U.S. Senate seat in Washington state. He attained only 2.3% of the vote.