What is “Grooming?” The Truth Behind the Dangerous, Bigoted Lie Targeting the LGBTQ+ Community 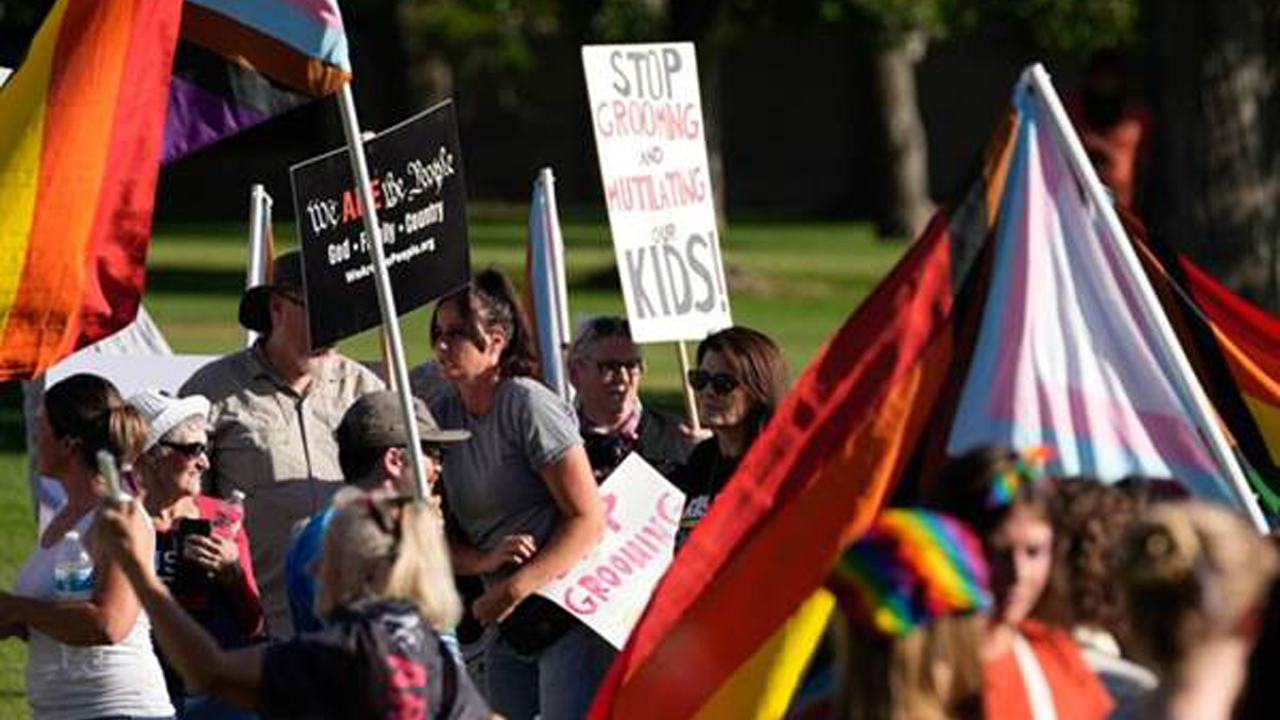 Far-right and extremist voices have launched a significant attack against the LGBTQ+ community in 2021-2022, demonizing people via repeated false claims that LGBTQ+ people are “pedophiles” who are “grooming” children in order to abuse them. This false and malicious narrative has been weaponized to label the LGBTQ+ community as “groomers” and has fueled a slew of hostile legislation and policies aimed at erasing the discussion of LGBTQ+ related issues in schools, removing LGBTQ+ books from schools and public libraries and, especially, to ostracize, defame and harass transgender people.

The result of this widespread hateful rhetoric has been a spike in harassment, threats and violence targeting the LGBTQ+ community. This dangerous development increases the risks facing an already marginalized group by falsely accusing them of one of the vilest behaviors imaginable, in a way that implicitly (and sometimes explicitly) condones violence. Politicians, extremists and pundits alike are fanning the flames of this hateful campaign, which not infrequently includes elements of antisemitism alongside its core anti-gay and anti-transgender hate.

Anti-LGBTQ+ extremists have misappropriated a legitimate term related to sexual abuse in order to demonize LGBTQ+ people. RAINN (Rape, Abuse & Incest National Network), the United States’ largest anti-sexual violence organization, defines grooming as “manipulative behaviors” used by sexual abusers “to gain access to a potential victim, coerce them to agree to the abuse, and reduce the risk of being caught.”

True grooming can occur online or in-person. Abusers may attempt to gain a young person’s trust by giving them gifts and attention, and by taking them on special trips. Groomers may also attempt to form a relationship with a young person’s family or friends to make themselves seem more trustworthy.

How has the term "grooming” been co-opted and exploited by anti-LGBTQ+ bigots?

Anti-LGBTQ+ figures do not use terms such as “grooming” and “groomer” legitimately. Instead, they imply or explicitly claim that LGBTQ+ people are pedophiles who are preying on children by discussing issues related to sexual orientation and gender identity. They claim that teaching young people about these topics is somehow really intended to encourage them to question their gender identity and sexual orientation – in other words, LGBTQ+ people are trying to “sexualize children” and “recruit” them into the LGBTQ+ community.

Such accusations have a long history in the U.S. For decades, anti-LGBTQ+ figures have falsely accused LGBTQ+ people of molesting children and being sympathetic to child predators in order to demonize the community and resist advances in LGBTQ+ rights. Research has repeatedly shown that LGBTQ+ people do not molest children at higher rates than non-LGBTQ+ people.

Baseless accusations that LGBTQ+ people and others are “grooming” children began to circulate on Twitter in 2021, promoted in particular by conservative pundits Christopher Rufo and James Lindsay, as well as the anti-LGBTQ+ Twitter account known as Libs of TikTok. However, it wasn’t until spring 2022 that “grooming” rhetoric really became a major anti-LGBTQ+ narrative getting nationwide attention, thanks in large part to publicity surrounding a controversial anti-LGBTQ+ law passed in Florida.

On March 28, 2022, Florida Governor Ron DeSantis signed into law the Parental Rights in Education Act, often referred to by critics as the “Don’t Say Gay” bill. The law prohibits classroom instruction on gender identity or sexual orientation in grades K-3 in Florida public schools; it also prohibits instruction on sexual orientation and gender identity issues that are not “age-appropriate or developmentally appropriate for students” in any grade. Like the controversy surrounding critical race theory in 2021, the Florida bill – and similar laws proposed in other states – are based on the false premise that educators are trying to “indoctrinate” students.

Angry that opponents had nicknamed the measure the “Don’t Say Gay” bill, Christina Pushaw, DeSantis’ press secretary, tweeted on March 4 that “the bill that liberals inaccurately call ‘Don’t Say Gay’ would be more accurately described as an Anti-Grooming Bill.” In a follow-up tweet, she claimed that anyone who opposed the bill was “probably a groomer.” 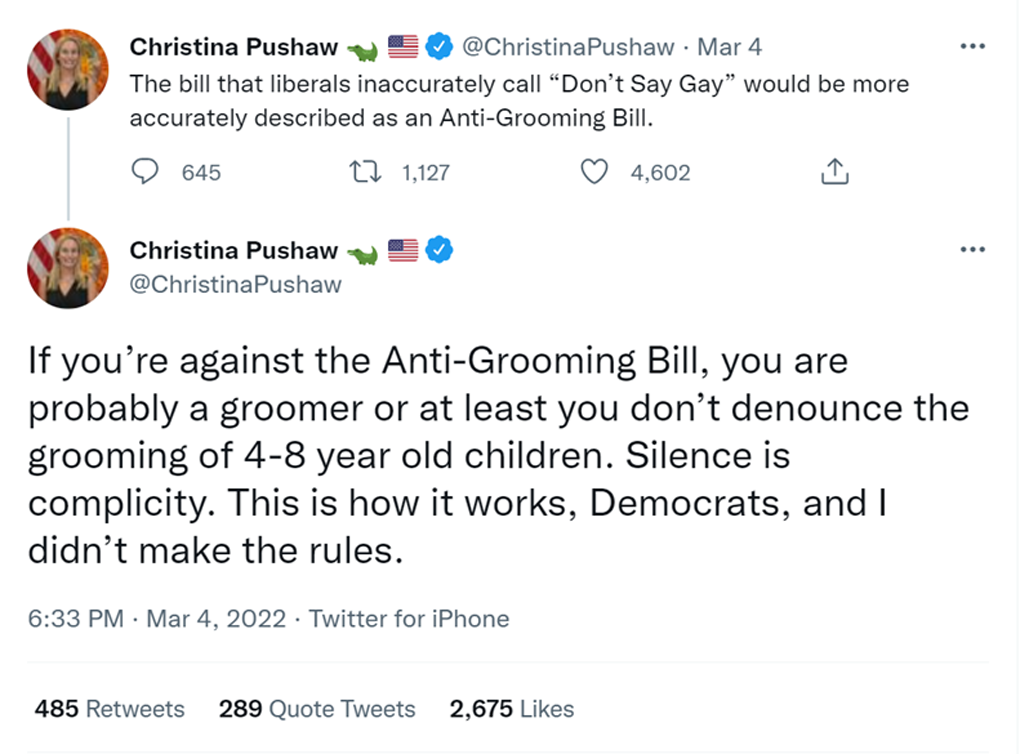 Supporters of the bill quickly adopted “groomer” rhetoric to attack opponents of the legislation. In a March 8 tweet, for example, conservative talk show host Jesse Kelly wrote that, “Republicans, you have everything on your side on this issue. Do not avoid it. Run on it. Demand your opponent respond to questions about it. Call them groomers and pedophiles if they oppose it. Put THEM on the defensive. Make THEM afraid. Make THEM avoid talking about it. You have the high ground. Use it to destroy your enemy.”

On her March 9 show, Fox News host Laura Ingraham followed suit, asking, “When did our public schools, any schools, become what are essentially grooming centers for gender identity radicals? As a mom, I think it's appalling, it's frightening, it's disgusting, it's despicable." Benny Johnson, the Chief Creative Officer for conservative group Turning Point USA, tweeted on March 11 that “If you believe perverted groomer teachers should be allowed to sexualize kindergartners and parents have no right to know or protest than you are a sunken demonic person. Find God.” An April 2022 report from Media Matters found that Fox News had aired 170 segments focusing on transgender people over a three-week period as it covered opposition to the “Don’t Say Gay” bill.

On March 28 – the day DeSantis signed the bill into law – the Walt Disney Company released a statement saying the bill “should never have been signed into law” and that their “goal as a company” was for the law “to be repealed by the legislature or struck down in the courts.”

Disney quickly became the target of “grooming” accusations due to its denouncement of the bill. Right-wing pundit Candace Owens tweeted that the company had “openly admitted they have a not so secret agenda with your children.” Far-right Arizona state senator Wendy Rogers tweeted on March 30 that “Disney should now be known as the grooming company.” In April 2022, right-wing conspiracy theorist Jack Posobiec accused Disney of supporting grooming in a tweet; “Disney Groomer” began trending on Twitter shortly after.

Disney also drew the ire of a variety of right-wing extremists and conspiracy theorists. On April 6, over a hundred protesters gathered outside of Disney's headquarters in Burbank, California, to oppose the company’s “woke” agenda. Attendees carried signs that read “Disney: Stop Mousing Around With Our Kids” and “Boycott Disney and Their Attack On Our Kids: It’s a Satanic Agenda.” The event was organized by Sean Feucht, a Christian singer-songwriter who frequently performs at the conspiratorial “Reawaken America” conferences.

In April and May 2022, members of the white supremacist group White Lives Matter Florida staged protests outside of Walt Disney World in Orlando alongside members of the neo-Nazi Sunshine State Nationalists and the Proud Boys. The antisemitic Goyim Defense League has also distributed fliers across the U.S. claiming "every single aspect of Disney child grooming is Jewish.”

Members of White Lives Matter Florida and the Proud Boys held a demonstration outside Walt Disney World in Orlando, Florida on May 14, 2022. 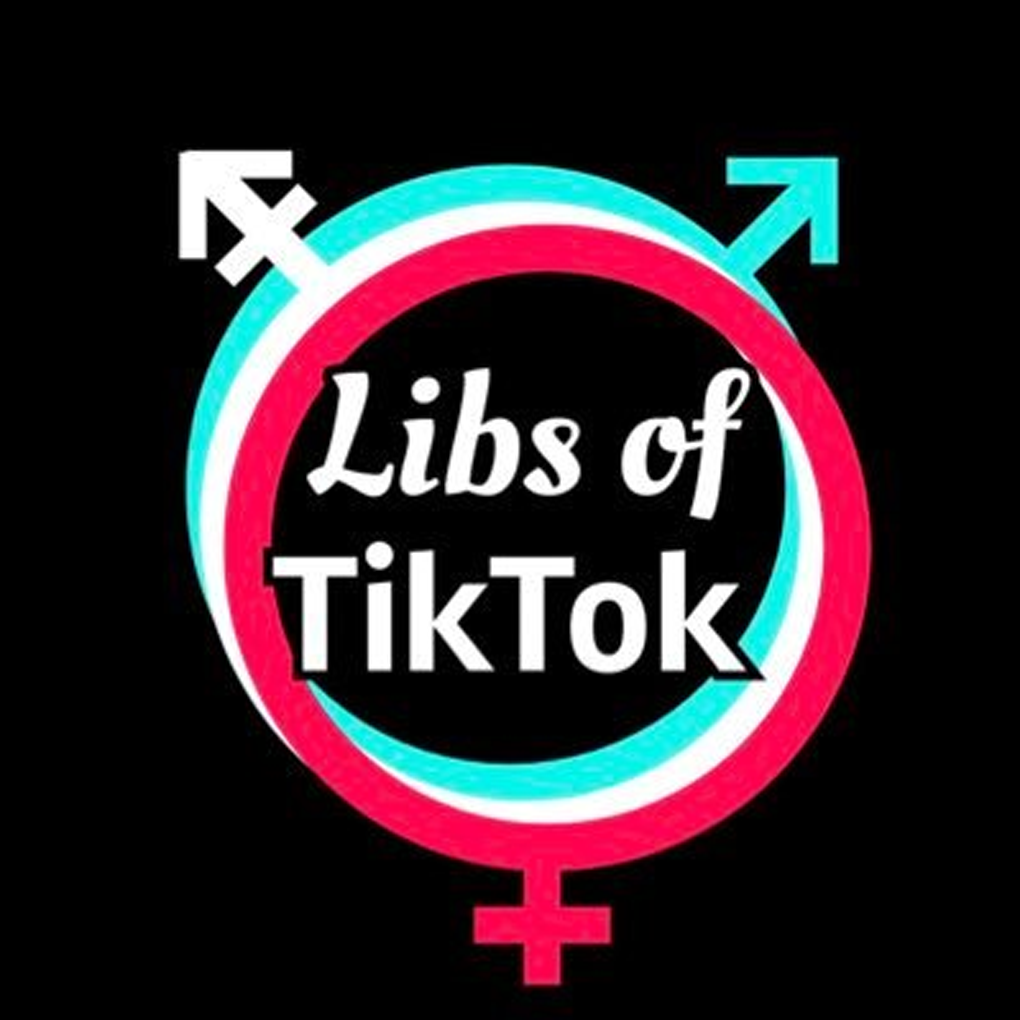 As the “groomer” narrative has gained traction, LGBTQ+ people have faced a wave of increased harassment, threats and violence. On far-right forums, users have repeatedly doxed and threatened drag queens, teachers, Disney employees and healthcare workers, leading to the cancellation of LGBTQ+ events and heightened security outside schools and hospitals.

No person or entity has been more influential at inciting this hate than the anti-LGBTQ+ Twitter account Libs of TikTok, operated by former real estate agent Chaya Raichik. The account, which has over 1.3 million followers and has been praised by the likes of DeSantis press secretary Christina Pushaw and Fox News host Tucker Carlson, reposts selected out-of-context social media content created by LGBTQ+ people and liberals in order to generate outrage and stoke anti-LGBTQ+ hostility. Raichik has frequently characterized LGBTQ+ people and allies, as well as those who teach about LGBTQ+ issues and healthcare professionals who offer gender-affirming care, as “groomers.” The individuals, events, schools and organizations targeted by Libs of TikTok are frequent targets of harassment, threats and violence.

In spring 2022, the Kiel Area School District in Wisconsin launched a Title IX investigation into three middle school students for allegedly bullying a transgender classmate, including by repeatedly addressing them by the wrong pronouns. Libs of TikTok publicized the investigation in mid-May; the district soon received a wave of harassing calls and emails. The school district, as well as the town library and City Hall, also received multiple bomb threats, and the FBI arrested a California man for threatening to kill a district employee. In response to the threats, the city cancelled its annual Memorial Day parade, and the district went virtual for the rest of the school year. The district closed the Title IX investigation in early June.

In August 2022, Boston Children’s Hospital became the target of a major harassment campaign after Libs of TikTok falsely asserted that the hospital was performing gender-affirming hysterectomies on “young girls,” a claim that has been debunked by PolitiFact and USA Today. The hospital suffered a barrage of harassing phone calls and emails as a result and has also been targeted twice by bomb threats. Libs of TikTok has since targeted other hospitals with false claims about gender-affirming care, leading to similar harassment and threats against these facilities. Anti-LGBTQ+ figures have also accused numerous doctors who provide gender-affirming care of engaging in “child mutilation.”

Libs of TikTok essentially acts as a compass, guiding anti-LGBTQ+ activists towards targets for harassment and protest. Drag events, such as family-friendly drag shows and “drag queen story hours,” have become a popular target for anti-LGBTQ+ activists, who believe such events “sexualize children” and are encouraging young people to embrace an “immoral lifestyle.”

Organizers and sponsors of numerous LGBTQ+ events have had to cancel events out of fears for attendee and staff safety after being targeted by Libs of TikTok. 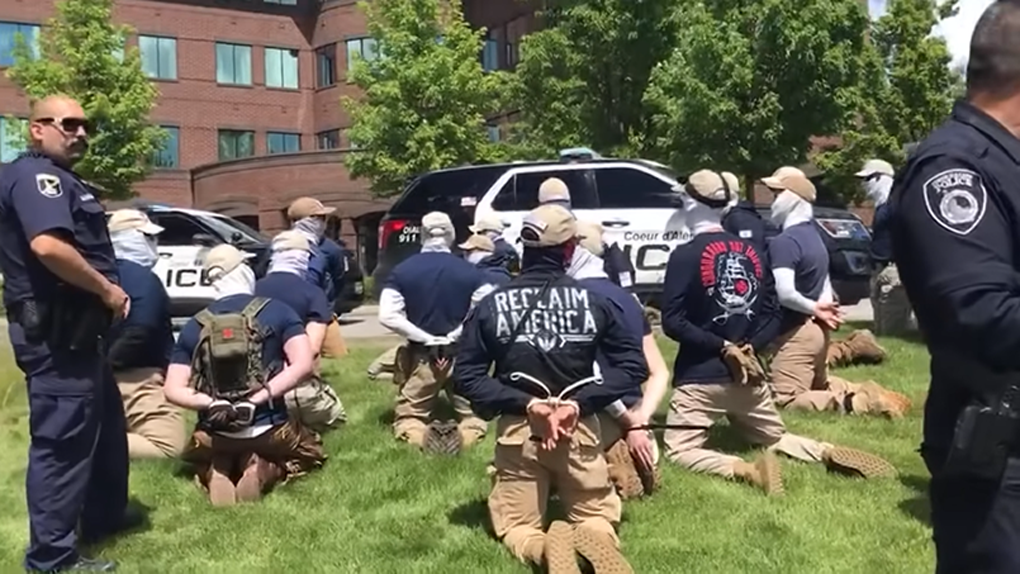 Thirty-one members of Patriot Front, a white supremacist group, were arrested on their way to protest a Pride event in Coeur d’Alene, Idaho on June 11, 2022. Source: North Country Off Grid

The far right is specifically targeting mainstream conservatives and some members of the Republican party, selling the false groomer narrative as a tool to score political points and rally voters ahead of the 2022 midterms. According to the Human Rights Campaign, as of July 2022, 23 states have introduced anti-LGBTQ+ bills in 2022; 13 states have signed anti-LGBTQ+ bills into law. CNN reports that more than 40 bills have been proposed by Republican lawmakers across 18 states as of July 2022, aimed at restricting what teachers can say about LGBTQ+-related topics in the classroom.

Right-wing extremists have also adopted the groomer narrative to further demonize LGBTQ+ people, justify harassment and violence towards the LGBTQ+ community and advance their own infiltration of the mainstream right. The Proud Boys have disrupted at least 10 LGBTQ+ events since March 2022, accounting for more than half of anti-LGBTQ+ extremist event activity tracked by the ADL Center on Extremism this year.

White supremacists have frequently targeted LGBTQ+ events over the past few months: 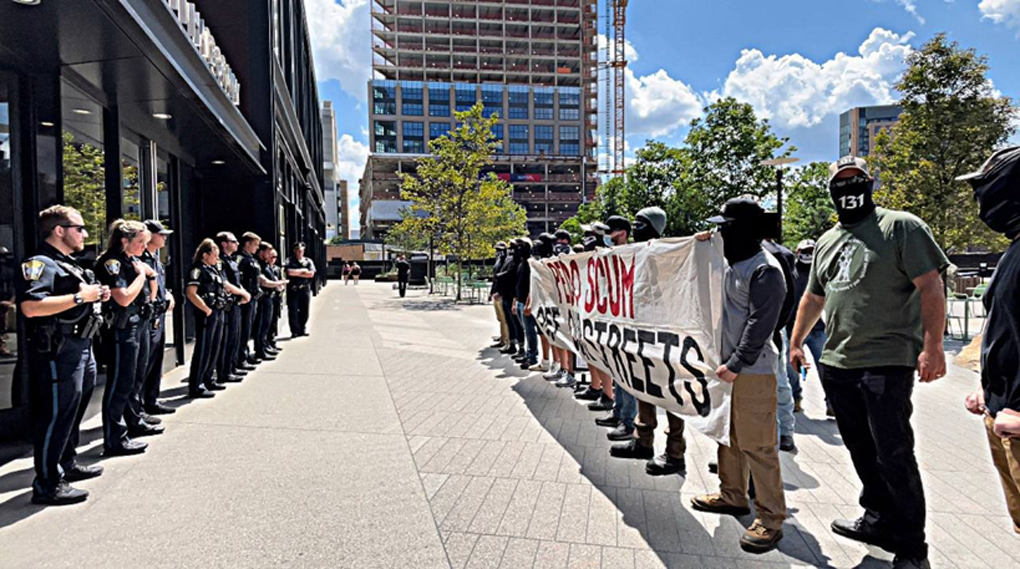 In a previous version of the article, it may have been interpreted that Mr. Rufo has pointedly associated grooming with the LGBTQ+ community, so for the avoidance of any doubt we have clarified by adding “and others.”