In March 2021, Chet Hanks, son of actor Tom Hanks, published a series of social media posts critiquing white men’s attire and behavior, culminating a month later with the release of his song, “White Boy Summer.” A play on Megan Thee Stallion’s 2019 hit song, “Hot Girl Summer,” “White Boy Summer” has taken the internet and meme culture by storm.  And while “White Boy Summer” was not initially intended to be hateful, white supremacists have adopted the slogan and leveraged it for their own purposes.

This is not the first time white supremacists have co-opted an innocuous slogan by layering on exclusionary messaging and using it as a call for action. The phrase “White Boy Summer” or WBS, now in evidence on Telegram, Discord, 4Chan, Gab, Parler, and Twitter, shows extremists using a popular cultural trend to infiltrate mainstream conversations and disguise their racist beliefs as irony or jest. It should be noted that non-extremists also continue to use the phrase, but in largely non-hateful contexts. 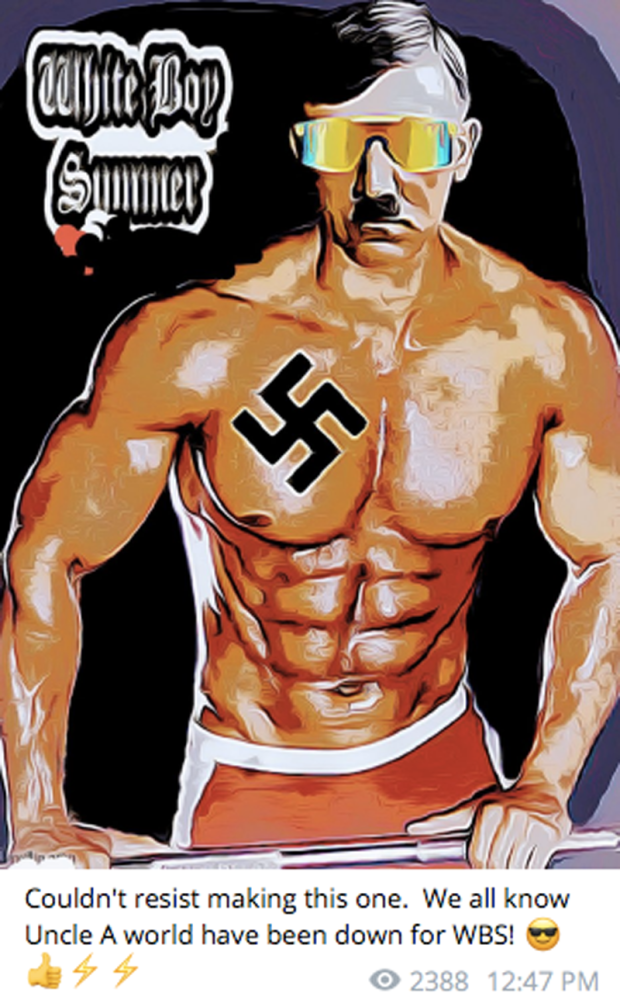 “White Boy Summer” (WBS) has shown up in extremist channels and rhetoric in three distinct ways: general “shitposting,” racist and misogynistic tropes and explicitly white supremacist propaganda. Many memes on extremist channels have strategically adopted aesthetically pleasing imagery to disguise or distract from their real messages; layers of these seemingly playful images of summer fun can be peeled away to expose messages of hatred and calls to action. 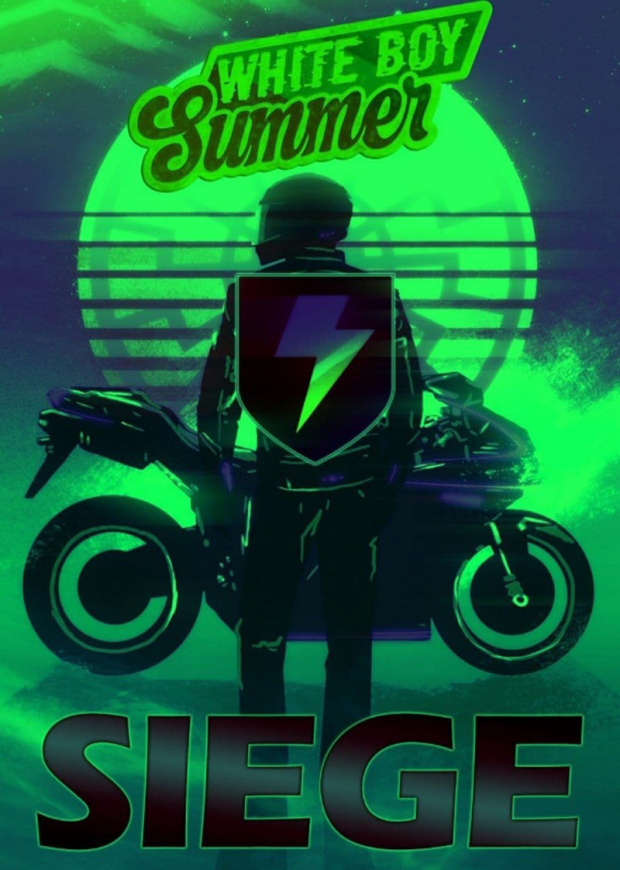 Extremists are promoting “White Boy Summer” online using “shitposting,” a term that originated in online forums that refers to trolling—frequently using memes—in order to evoke a reaction. This typically involves bigoted humor and sarcasm mixed with subtle extremist elements. These tactics have been used to fuel reactions in mainstream media and distort the meaning of the phrase “White Boy Summer.” In April 2021, a Telegram user proposed adopting a brand popular amongst liberals (who the user referred to as “libtards”) as the “preferred brand of White Boy Summer [sic] enjoyers,” in order to “make a media storm around it.” The user referenced the Proud Boys adoption of Fred Perry polo shirts as inspiration. This wasn’t necessarily to further any single ideological agenda but aimed at disrupting public discourse and stirring debate online, particularly on the left. 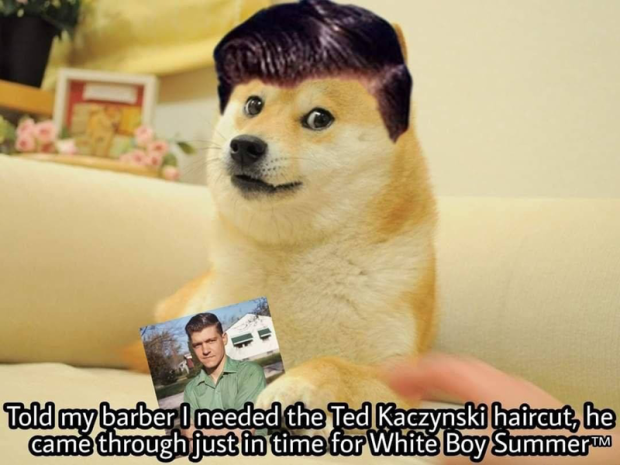 The concept of “White Boy Summer” as something reserved for white people and men has quickly been translated into racist and misogynistic rhetoric. Coded language, symbols and narrative manipulation are central tactics white supremacists use to appeal to mainstream people, or “normies.” While some WBS memes include white supremacist/Neo-Nazi symbols, such as swastikas or references to the white supremacist 14-words slogan, other WBS promoters are tactically watering down their content to attract less extreme users and disseminate their content widely. One Telegram account outlined this plan, encouraging users to strategically create content “without the use of Fascist/NS symbols so normies can get in the mood for white boy summer, and not get scared away.” 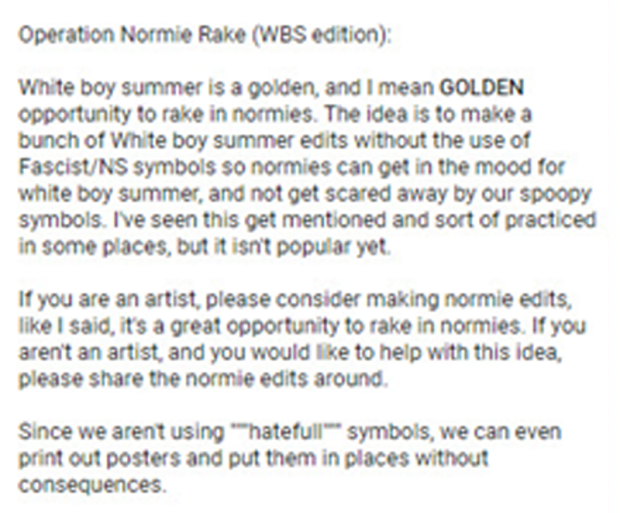 Racists and misogynists are also using “White Boy Summer” to promote opportunities for white male sexual prowess or “conquering.” One 4Chan user called for white men during WBS to “go out and claim your wife” because non-white males “are coomming [sic] here for our Women and secondary our money.” Interracial relationships, which are typically discouraged by white supremacists, are being promoted by some WBS influencers, who want to see white men “conquer” women, regardless of race. One 4Chan user posted that white men should retaliate against “non-whites” by seeking out women of color during WBS to “show [them] who the boss is.”  This notion has not been embraced across the spectrum of WBS proponents, but the debate has triggered broader misogynistic and racist conversations about the attractiveness and fetishization of women of different races within posts and memes encouraging a summer of white male gratification.

The final element of extremists’ online use of WBS is its incorporation into explicitly antisemitic and white supremacist propaganda. Posts depicting notorious mass murders including Dylann Roof, John Earnest and Ted Kaczynski as heroes of “White Boy Summer” have circulated online, most frequently in accelerationist channels on Telegram. These violent individuals have long been lionized and promoted by white supremacists as heroes for the white race. 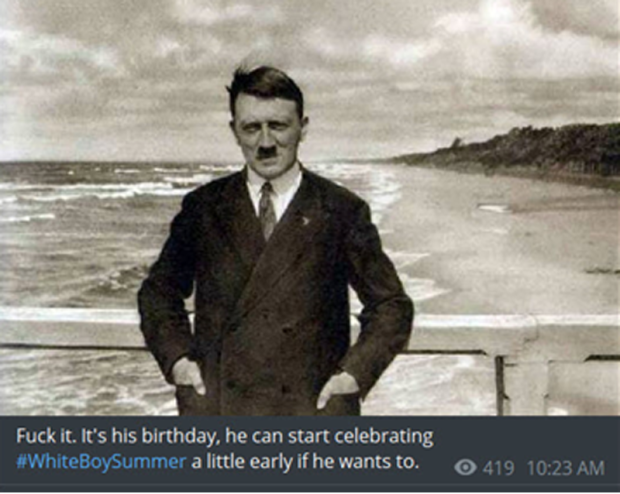 Not all white supremacists have fully embraced of the concept of “White Boy Summer.”  Some have summarily rejected it, not on principle, but based on a Qanon-esque conspiracy that the Deep State cabal, including Chet Hanks’ father Tom, is actually using “White Boy Summer” to manipulate the population into a race war in which Jews will triumph.

Online users have also used “White Boy Summer” as a reaction to real world events that are perceived as anti-white or that do not further white supremacist ideals. In some cases, “White Boy Summer” 2021 is presented in direct opposition to the social justice protests observed in the summer of 2020. The national movement against police brutality and calls for racial justice were perceived by white supremacists as further proof that the United States’ system and society were stacked against white people. Posts including the phrase “Take back the summer” perpetuated the idea that white people have lost something that must be reclaimed. 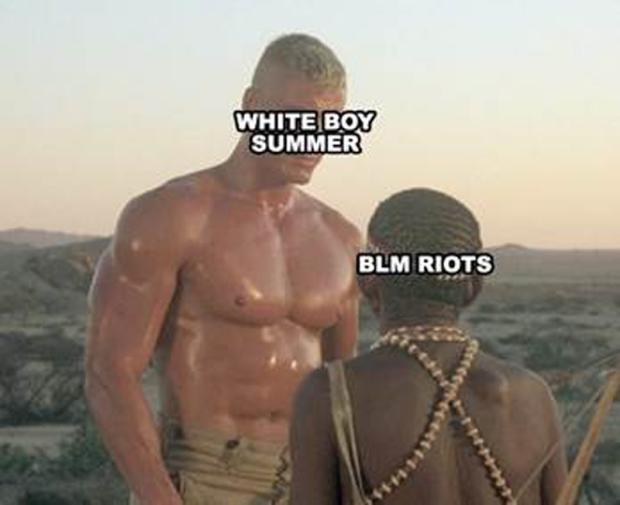 When the Derek Chauvin verdict was handed down on April 20, 2021, extremist posts encouraged people to engage in violence related to the guilty verdict, or “start celebrating #WhiteBoySummer a little early.”

In these cases, “White Boy Summer” was framed a justifiable physical response to “threats” against whiteness. One Telegram user posted shortly after the verdict: “The facts don't matter to these subhuman mongrels. All they know how to do is destroy and tear down. The worst part of it is, they will be allowed to do this with reckless abandon while suffering no consequences whatsoever. And if Whites in the vicinity defend themselves or their property, the anti-White system will descend upon them with full force. White Boy Summer about to kick off this week.” 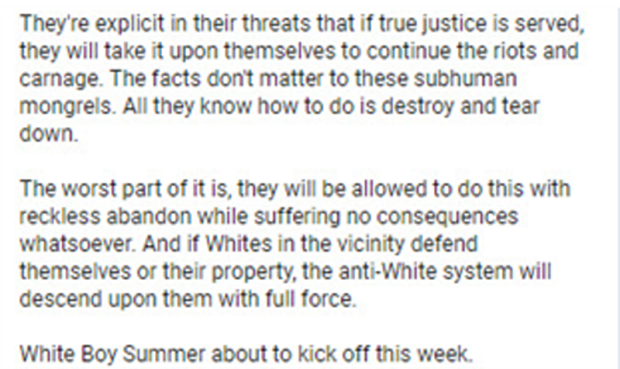 From Memes to Mobilization

This online meme phenomenon has now transitioned to real world hate. The ADL’s Center on Extremism has been tracking a variety of WBS-themed activity across the United States including merchandizing, physical propaganda distribution, extremist meetups, and proposed events. At this time, we have not found evidence of targeted or credible threats against minority communities, but the increasing rhetoric online is of concern.

Some extremists have tried to profit from this trend by designing merchandise, including clothing, to promote the idea of “White Boy Summer.” These designs, separate from the original merchandise line promoted by Chet Hanks, have been co-opted by individuals like vocal white supremacist Nicholas Fuentes and his organization America First. Fuentes has released an entire WBS merchandise collection with shirts sporting slogans like “White Boy Summer: Always Open,” “Radical Extremist” and “Hate Speech Enjoyer.” 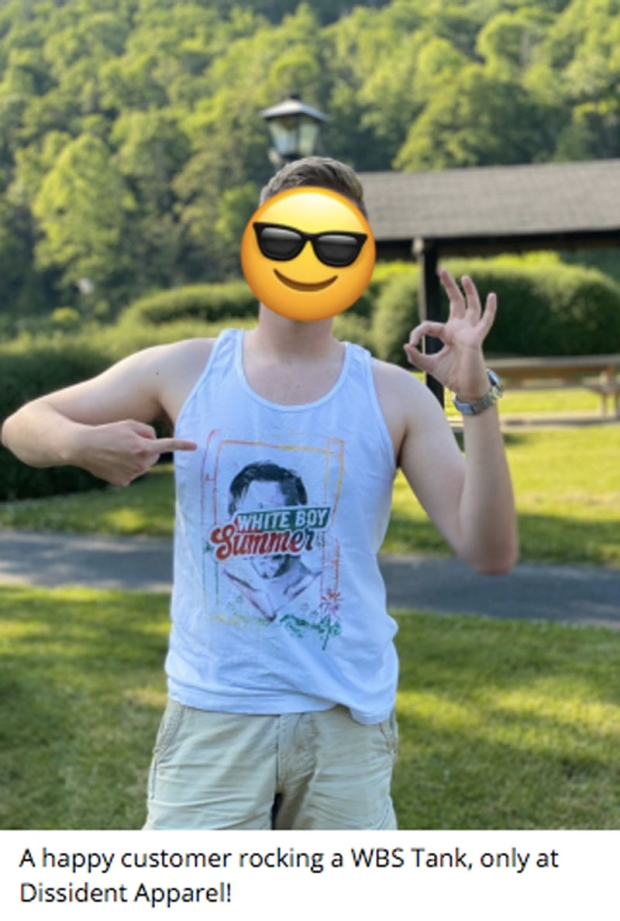 The Goyim Defense League, a network of antisemitic individuals that operates online and is active around the United States, wrote the variation “White Goy Summer” on their van during their “Name the Nose” tour across Florida in 2021. 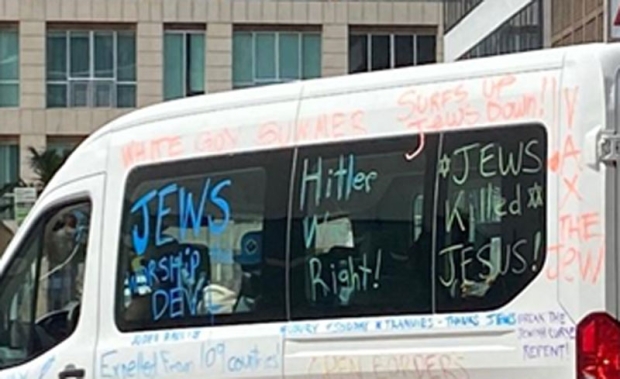 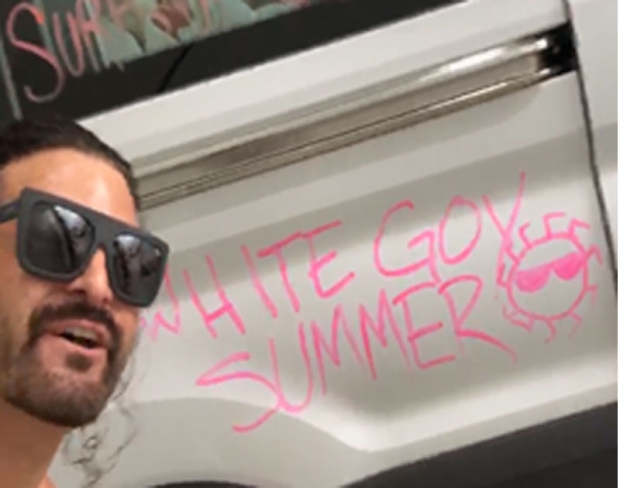 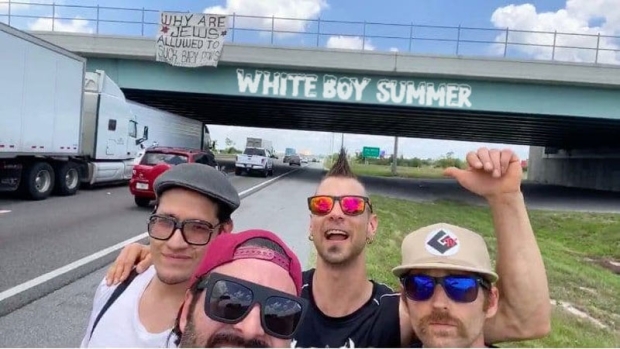 “White Boy Summer” has also inspired at least one extremist meetup. In one incident, the New England National Social Club (NSC), conducted a group training at a beach, noting, “NSC does WBS best.” The NSC is a neo-Nazi organization whose members see themselves as soldiers at war and hope to form underground networks of men who will fight against the “Jewish-controlled system” that they believe is deliberately plotting the extinction of the white race. 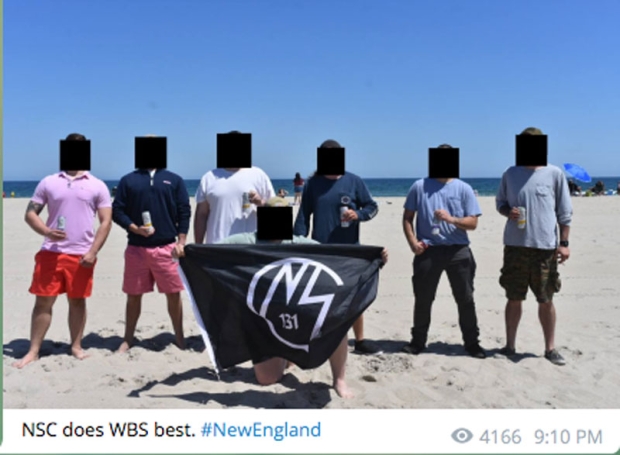 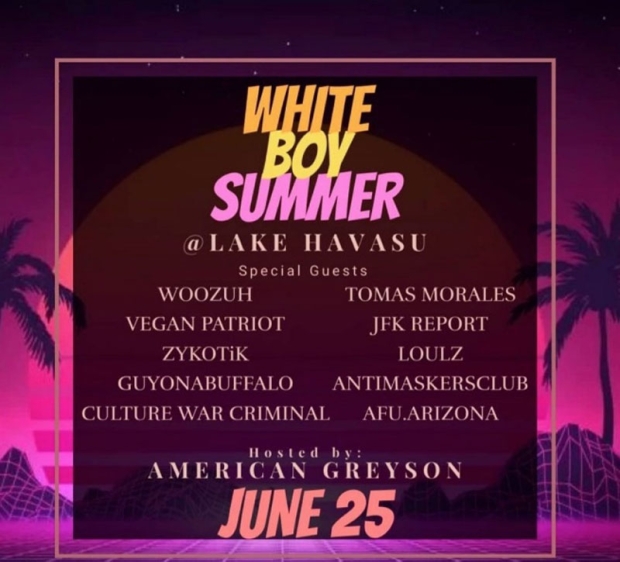 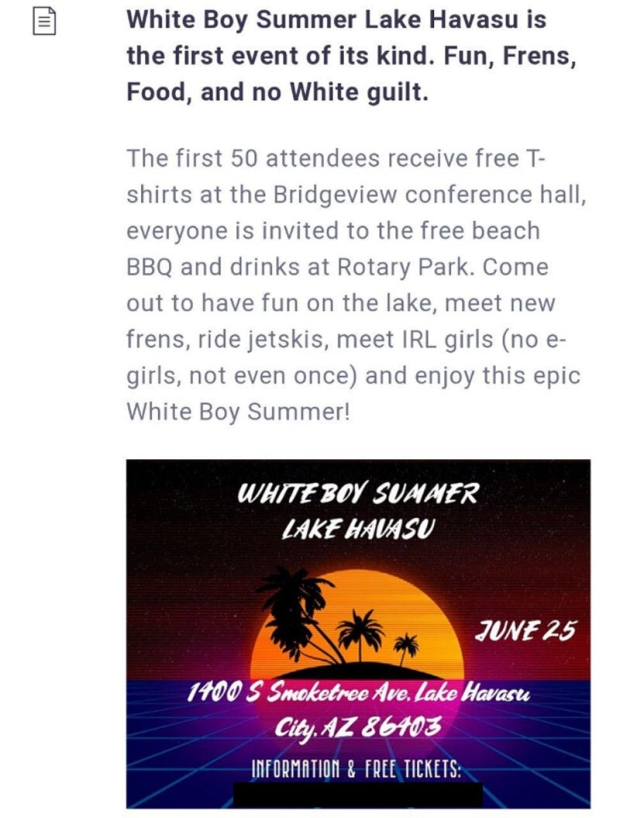 As shown here, these extremists’ fliers mimic modern music festival posters, in hopes of appealing to a wider and younger audience – with potential real-world impact over the coming summer months.