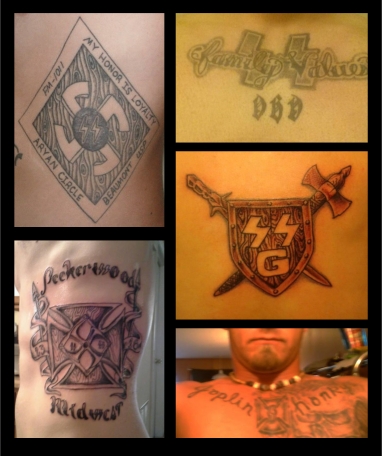 Now, however, there are a number of white supremacist gangs active in Missouri, typically emerging in prisons and jails, then expanding onto the streets. These gangs combine the criminal know-how of organized crime with the bigoted ideology of hate groups.

Law enforcement has been increasingly concerned about the spread of such gangs in Missouri. Unfortunately, recent events have justified that concern. On January 26, 2015, a member of the Southwest Honkies gang, Joshua Lee Hagood, shot a Springfield police officer in the head while police were investigating a suspicious van. The officer sustained career-ending injuries. This was actually the second officer shooting in Springfield related to the gang. In 2013, Honkies member Martin Potts wounded another officer during a shootout before officers fatally shot Potts.

Police have not been the only Missourians at risk. In February, two Southwest Honkies members, Aaron Williams and Austin Pierce, were charged with a hate crime after allegedly threatening to kill an African-American woman and her children while trying to break into her house. In January, a member of the Joplin Honkies received a seven-year prison sentence for assault and abandoning a corpse.

Gangs like the Joplin and Southwest Honkies are growing in Missouri. Accompanying that growth is increased crime, typically traditional crimes like home invasions or drug-related crime (gangs are often involved with the methamphetamine trade). Criminal gain tends to trump white supremacy, but gangs can engage in hate-related violence, too. Gangs often embrace a cruder form of white supremacy than neo-Nazi or Klan groups, but have larger memberships.

There are five main white supremacist gangs operating in Missouri: