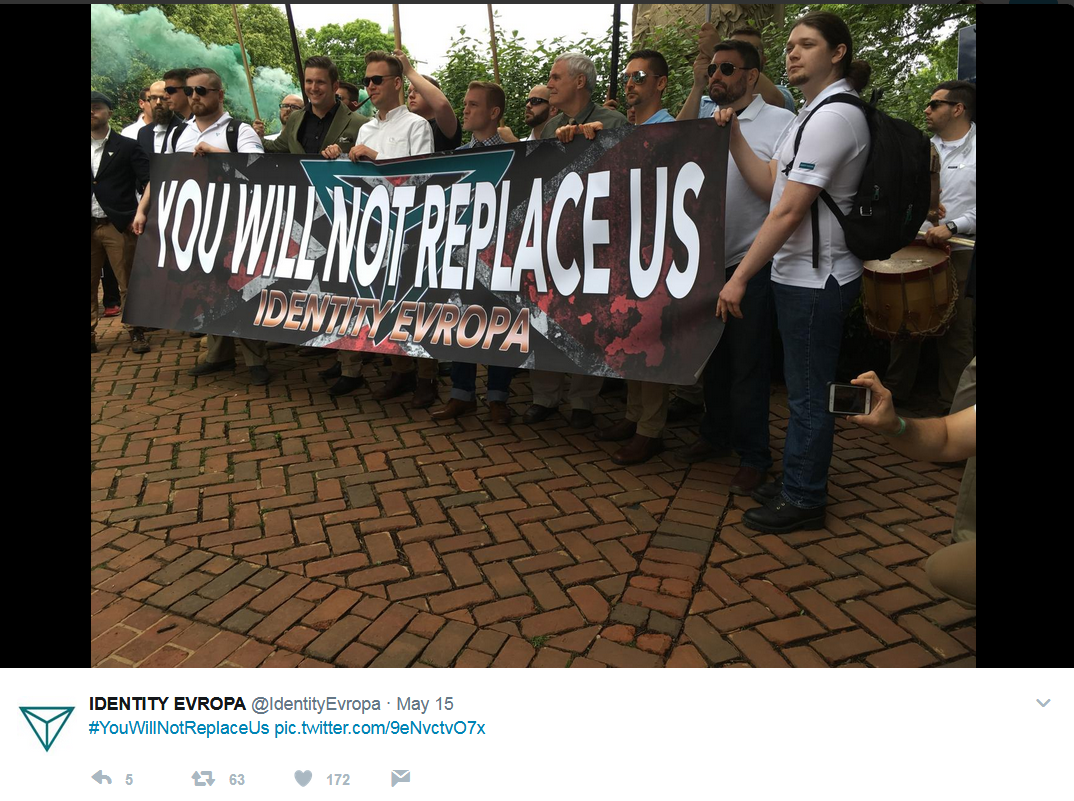 White supremacists have embraced a new slogan: “You will not replace us,” which has become a rallying cry at events and a catchphrase on fliers posted at universities. The slogan speaks to a number of issues that white supremacists are preoccupied with--the preservation of the white race and white cultural history, and their fear that whites will become a powerless minority in the face of changing demographics.

The slogan is the latest attempt to rally people to the white supremacist cause. It follows in the footsteps of the best-known white supremacist motto: “We must secure the existence of our people and a future for white children,” otherwise known as the “14 words.” The term reflects the primary white supremacist worldview that unless immediate action is taken, the white race is doomed to extinction by an alleged “rising tide of color” purportedly controlled and manipulated by Jews.

The use of “You will not replace us” appears to have started in early February 2017. On February 4, members of Identity Evropa, a white supremacist, alt right group founded by Nathan Damigo, showed up at the Museum of the Moving Image in New York City, where actor Shia LeBeouf has set up an anti-Trump live-stream for a project called “He will not divide us.” Damigo, who was visiting from California, said to the camera “Shia LeBeouf, you will not replace us with your globalism." Others then joined in, shouting repeatedly, “You will not replace us.”

Members of Identity Evropa appeared at LeBeouf’s anti-Trump live feed other times as well. They marched to the museum holding a sign saying, “One Nation, End Immigration,” and shouted those words followed by, “You will not replace us.” The slogan soon began appearing on Twitter as a hashtag and garnered attention across social media platforms.

The fliers, which depict a white family with a baby, hark back to the fliers distributed in the 1990s and early 2000s by the neo-Nazi National Alliance. The Alliance fliers featured idealized pictures of white women and children with the expression, “Love your race.”

On May 2, there were over 2,000 posts referencing “you will not replace us” on Twitter. The spike seemed to coincide with the posting of the fliers on campuses and other places and people sharing those images on Twitter.

On May 13, “You will not replace us,” became the rallying cry of dozens of white supremacists protesting the removal of Confederate monuments in Charlottesville, Virginia. Spencer and Damigo led the protestors in shouting the slogan. Members of Identity Evropa also carried a banner bearing the slogan. Again, this led to a spike of about 2,000 posts referencing the slogan across social media platforms.

A week later, on May 20, two Marines were arrested after they unfurled a banner on a building that including the letters “YWNRU,” the acronym for “You will not replace us.” The two men, who were charged with trespassing, had attended a pro-Confederate rally in Graham, North Carolina. While this did not lead to as big a spike, once again, the phrase became popular on social media sites.