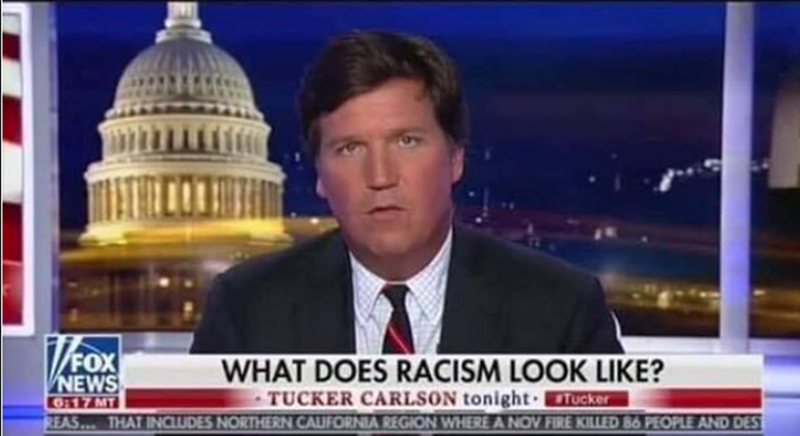 In the days following Tucker Carlson’s vitriolic, xenophobic commentary about demographic change, most white supremacist reactions were supportive of the Fox News personality and praised him for railing against “white genocide.” Some suggested that Carlson is finally showing his true colors and fully embracing white nationalism. One 4Chan poster wrote: “As predicted, Carlson is our guy.”

Other extremists argued Carlson is not taking a strong enough position and called him a “cuck.” One 4Chan poster wrote: “You guys keep falling for the same sh*t.” The vast majority of comments on extremist forums mention ADL – and the organization’s response to Carlson’s bigoted message -- by name.

“You know who needs to go? Not Tucker Carlson or White people, not even blacks, or Asians. JEWS need to go. Once that happens, the rest of us can sort out our differences and separate.”
-- Telegram

“Tucker sat down and proved white genocide was real. That white nationalists and white supremacists were 100% right and that it is being systematically implemented globally to genocide whites and make them powerless oppressed minorities within what were once their own borders. But that requires action…”
- 4Chan

Andrew Anglin posted appreciatively on his neo-Nazi site The Daily Stormer: “Tucker Carlson finally struck back against the Jews on Monday, dropping the ultimate truth bomb on his audience: Jews aggressively lobby for the same demographic policies in America that they openly declare would destroy their own country… I had been down on Tucker recently, after his horrible election fraud coverage, then his fixation with State Department talking points on China. However, he has more or less totally redeemed himself in my eyes.”

White supremacist Nick Fuentes, who leads the “Groyper Army/America First” movement, appeared to celebrate on Twitter, writing: “This week Tucker redpilled 4 million people and there is nothing liberals can do about it.” “Redpilling” is a popular right-wing reference to the movie The Matrix, in which a character is offered a blue pill to keep seeing the world as is appears, and a red pill to finally see the world as it truly is.

A number of extremists – including known figures like Fuentes and Mike Peinovich – posted comments that specifically targeted ADL’s role in the debate. 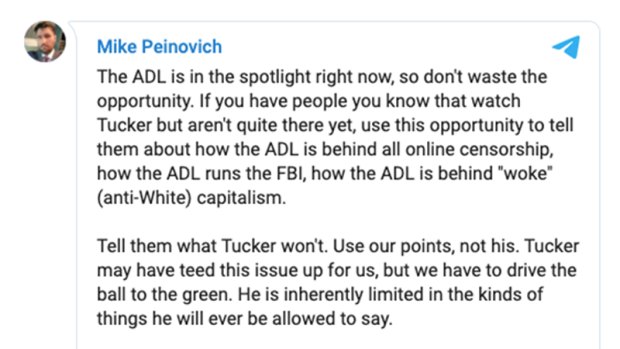 From racist, anti-immigrant website VDARE, which was founded by white supremacist Peter Brimelow:

Gab founder Andrew Torba, who has a long history of supporting extremists on his platform, wrote: “If you don’t want to be replaced in your own country, the ADL says you’re a white supremacist extremist.”

A Telegram channel that tracks Gab posts posited that Carlson has “awakened” the “normies” (non-extremists) to the danger of “demographic replacement,” while drawing comparisons between the “great replacement” theory and some of Israel’s current policies. 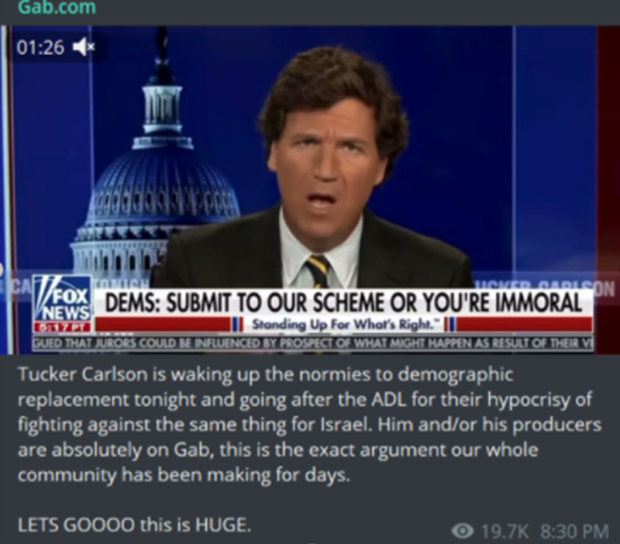 Carlson’s support among white supremacists does not appear to be a one-off; on April 21, the day after Carlson’s monologue complaining about the guilty verdict in the Chauvin murder trial, America First/Groyper leader Nick Fuentes again signaled his encouragement in a self-congratulatory message on Telegram: “… it is unequivocally a victory for AF [America First] to hear talking points from my show on Tucker Carlson Tonight…”