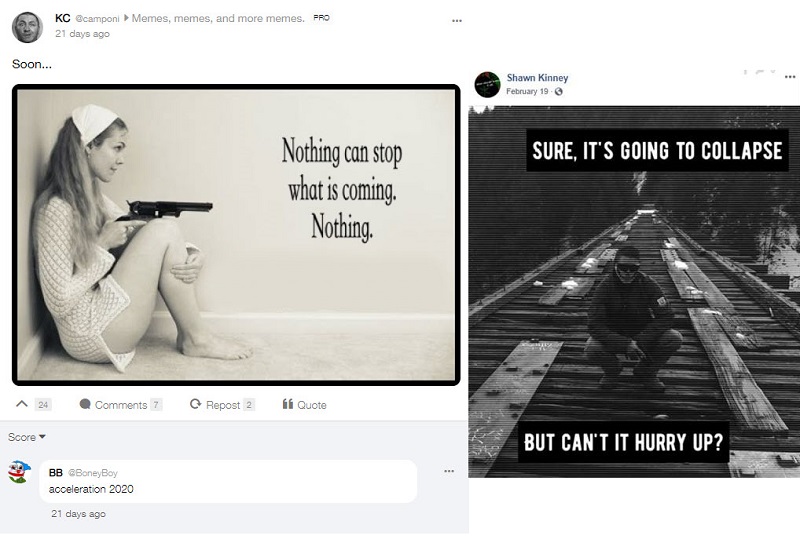 Accelerationism is a term white supremacists have assigned to their desire to hasten the collapse of society as we know it. The term is widely used by those on the fringes of the movement, who employ it openly and enthusiastically on mainstream platforms, as well as in the shadows of private, encrypted chat rooms.  We have also recently seen tragic instances of its manifestation in the real world.

The concept of acceleration has existed for years as a fringe philosophy.  Some of the earliest examples are rooted in a Marxist notion that the intensification of an unhinged force, such as capitalism, for example, will inevitably result in that force’s own self-destruction. However, some white supremacists have adopted the terminology and determined that a societal collapse is both imminent and necessary. On March 21, 2019, one anonymous 8chan user, who promoted white supremacist views, wrote, “I used to think acceleration was a marxist [sic] trick…Now, however, I see its value.”

Brenton Tarrant, the alleged perpetrator of the mosque massacres in New Zealand, subscribed to accelerationism -- the concept was specifically articulated in his manifesto, which he posted moments before his shooting spree. Tarrant dedicates an entire section of his manifesto to this concept under the heading “Destabilization and Accelerationism: Tactics for Victory.”

Tarrant’s actions seemed to breathe new life into the discussion of accelerationism and spurred a resurgence of references, paired with praise for his actions, on platforms including Gab, YouTube, Reddit, 8chan and others.

Equal But Opposite Reaction

The term “acceleration” references and encompasses two opposing forces.  On one end, extremists identify “acceleration” as the perceived escalation by nefarious entities to advance “degenerate” values and influences such as multiculturalism, liberalism and diversity, among others.  In line with deeply anti-Semitic views that dominate white supremacist beliefs, Jews are often blamed for their perceived role in promoting these elements—which white supremacists believe contribute to an imminent “genocide” of the white race.  This view is expressly articulated by Discord user EagleJarl on November 4, 2017, “The jews [sic] are the real accelerationists.” Discord is a chat platform for gamers to communicate with each other in real time.

Accelerationism, however, also serves as a reactionary call against the antagonistic forces that are causing society to spiral out of control.  In one Discord post from December 22, 2017, user Dr. Goebbowls wrote, “Anyone with half a brain and enough time can find the information to realize that accelerationism is the last resort of the white man of the modern age.”

Destabilization by Whatever Means Necessary

Fueled by the perception that the future of the white race is bleak, these white supremacists believe they must employ any means necessary to expedite the collapse of the current system.  Solutions to bring down the system range from the most extreme form, violence, to deliberate political engagement that supports destructive and divisive societal elements. For example, Tarrant referenced the need to bring about collapse by leaning in to disruptive forces, even those antithetical to white supremacist beliefs, writing, “A vote for a radical candidate that opposes your values and incites agitation or anxiety in your own people works far more in your favour than a vote for a milquetoast political candidate that has no ability or wish to enact radical change.”

Accelerationists believe that setting off a series of reactions, even if they result in changes that directly threaten the white race, can actually be a useful tool for motivating more reticent white supremacists. Following an extremist terrorist attack such as the Tree of Life shooting or Christchurch rampage, accelerationists identify a domino effect that is set into motion – a chain of societal reactions that further exacerbate the feeling of alienation among white supremacists, and, theoretically, a greater impulse to engage in violence or other destructive behavior.

This phenomenon was articulated by one anonymous 8chan post on March 21, 2019: “… ‘acceleration’ means…making things worse…and thus t [sic] alienate [sic] the White popluation [sic] and get the fence sitters off the fence…This was the core of what Bretton [sic] was trying to explain in his manifesto. He understood that ZOG [anti-Semitic conspiracy of Jewish control called the Zionist Occupied Government] would double down on censorship, gun grabbing, free speech, etc.”

But at the core of accelerationism is the goal of creating societal chaos.  Tarrant wrote, “True change and the change we need to enact only arises in the great crucible of crisis. A gradual change is never going to achieve victory.  Stability and comfort are the enemies of revolutionary change.  Therefore [sic] we must destabilize and discomfort society where ever possible.”  Tarrant presumably believed his murder of 50 worshippers at New Zealand mosques was helping to bring this extreme theory into the real world.

White supremacists hold up extremist publications like the Siege and Turner Diaries, for example as blueprints for violent accelerationist action.

Siege, a neo-Nazi compilation of essays by James Mason, predicts that “the final END of society is accelerating” because “the entire foundation itself is thoroughly corroded.”  Mason uses this as the basis for a call to engage in acts of violence that will expedite the inevitable collapse, writing, “At this juncture social malaise cannot be halted, only accelerated onward to the abyss, capitulating the whole vile episode of this end cycle.”

The Twitter poster “Jumper Siege” illustrates the crossover between those who embrace Siege “culture” and accelerationism.  He describes himself as an “Accelerationist NS” [national socialist] his photo banner reads “’strew the streets with the bodies of bureaucrats” while his bio includes the phrase, “Molotov the fed [sic]…”

White supremacists who advocate for accelerationism also turn to The Turner Diaries by William Pierce, which offers a more implicit packaging of the concept.  For example, the book presents a symbolic critique of a fictional character, described as a “responsible conservative,” who does not understand that “…one of the major purposes of political terror…is to force the authorities to take reprisals and to become more repressive, thus alienating a portion of the population and generating sympathy for the terrorists. And the other purpose is to create unrest by destroying the population's sense of security and their belief in the invincibility of the government.”  As one anonymous 8chan user posted on March 21, 2019, “Dr. William Pierce… ALWAYS [sic] supported men of action who fought for their race, even when he disapproved of their target selection.” 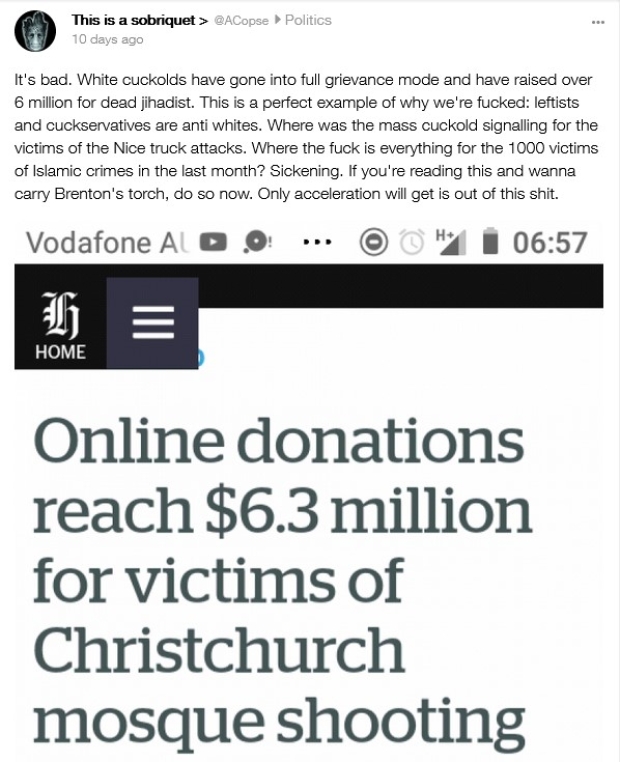 Accelerationism to the Core

Accelerationism is embraced throughout Fascist Forge, an online hate forum where posters discuss the “optimal” type of violent action. Poster Krokodil, who appears to have ties to white supremacist groups Atomwaffen and The Base, wrote on October 3, 2018: “If we wanted to, hypothetically, every single one of us could go full McVeigh [Oklahoma City bomber Timothy McVeigh] and start dispatching political and economic targets today, helping build the social tension that will accelerate the collapse of the System.” 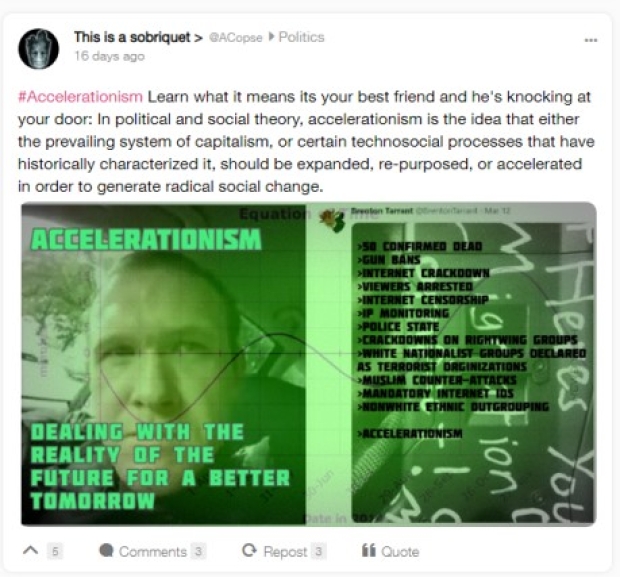 Accelerationism is a popular topic in private chat rooms frequented by white supremacist groups like Atomwaffen and The Base.  These virtual spaces are full of discussions about steps to take to hasten the ultimate collapse.

Atomwaffen articulates a white supremacist ideology rooted in nihilism and accelerationist beliefs.  Violence, chaos and destruction are themes echoed throughout their posts, propaganda and messaging.

Roman Wolf, The Base’s self-described communications specialist and recruiter, retweeted this before his account was suspended: “Our enemies will accelerate our situation as they are intent on achieving their goals. We cannot halt this acceleration. We can however speed it up even further—every act of resistance by whites causes a further reaction by our enemies.”