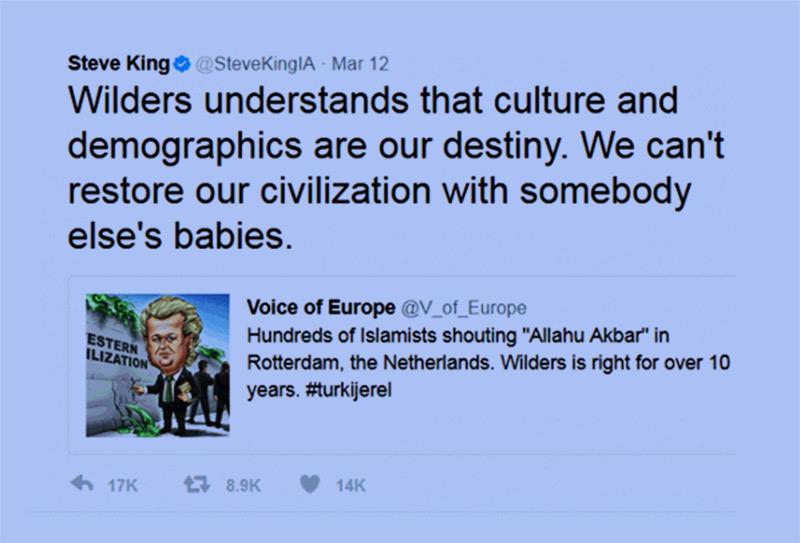 On Sunday morning, U.S. Rep. Steve King (R-Iowa) took to Twitter to express some feelings about immigration, finding common cause with a well-known anti-immigration activist from Europe.  “Wilders understands that culture and demographics are our destiny,” the Congressman wrote. “We can’t restore our civilization with somebody else’s babies.”

King was referring to Dutch politician Geert Wilders, an anti-Muslim crusader who is among the far-right politicians enjoying surging popularity as a nationalist wave sweeps Europe.

Reaction to King’s tweet was immediate, with many people responding directly on Twitter to voice outrage and condemn the remarks. By Tuesday, King had been given multiple opportunities to walk back his comments, but instead, he doubled down, telling an interviewer, “I meant exactly what I said.”  King later dismissed his critics, saying, “People hyperventilate over a tweet.”

Andrew Anglin of the neo-Nazi site The Daily Stormer hailed King’s remarks with a piece headlined: “Hero Steve King Calls for White Racial Supremacy in America.” Anti-immigration extremist Ann Corcoran tweeted  support for King, and VDARE founder and virulent racist Peter Brimelow wrote a passionate defense of King’s comments for the Daily Caller website, asking, “Why this pathological (and in this case misplaced) hostility to the idea that whites have rights in the U.S.?”

Mike Enoch, the white supremacist who runs the anti-Semitic alt-right website The Right Stuff and hosts the Daily Shoah podcast, applauded King’s comments and his follow up “explanation,” tweeting: “King doubles down. Great job. Take note cucks, this is how you *actually* fight the left.”

Two days after King’s initial tweet, white supremacist Richard Spencer released a video praising King’s “very true words” and warning him against caving to political pressure to apologize:  “Steve King is getting at a root nationalism, and I’m very proud of him for doing that. One thing I would tell Steve King….What you said was true. Don’t apologize. Speak the truth, no matter what the consequences.

Spencer expressed cautious optimism that King’s comments are a sign that some right-wing politicians are ready to embrace nationalist ideals. “If this is a signal that conservatives are moving in the right direction under Trump, that they’re getting at something real, I will be very happy.”