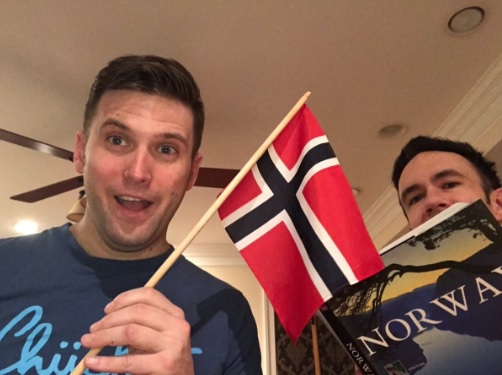 Mr. Trump made the comments Thursday afternoon during a White House meeting about immigration, asking the assembled group of Senators and Representatives why he would want “all these people from shithole countries,” referring to African nations and Haiti, adding that the United States should admit more people from places like Norway, according to the New York Times.

The comments elicited gratified responses from white supremacist “leaders” like Richard Spencer, David Duke and Andrew Anglin, as well as from rank and file racists.

Former Klan David Duke weighed in, urging Trump to “act” on his words: 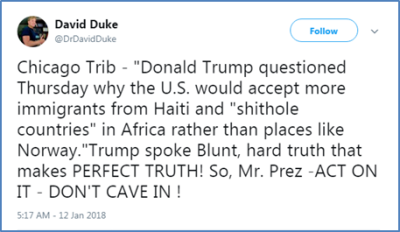 Andrew Anglin set the tone for readers of the Daily Stormer when he wrote:

“This is encouraging and refreshing, as it indicates Trump is more or less on the same page as us with regards to race and immigration….The real issue is all of these shitty brown people who come to the country exclusively to parasite off of us.”

“Haiti has been a shithole for far longer than there has been a Democratic party, you moron. It's full of gorilla niggers.”

Hunter Wallace, an Alabama-based white supremacist and member of League of the South, writing on Occidental Dissent, a prominent racist blog:

“We’re willing to flat out say that we DON’T want more illegal aliens from Third World shitholes like Haiti, Nicaragua and El Salvador. We DON’T want more of this #MeToo pussyfooting around like we saw from conservatives with Roy Moore. We DON’T want neocon regime change in Iran, huge tax cuts for multinational corporations, all this sucking up to Israel or pandering to the donor class. We’re sick of these people who are nothing more than puppets of billionaires.”

Kevin MacDonald appeared delighted by the possibility of controversy: 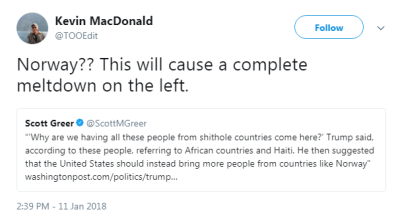 The Right Stuff’s Mike Enoch took the opportunity to inject anti-Semitism into the issue, claiming that Jews who control the media are to blame for showcasing Trump’s racist remarks. (Multiple sets of parenthesis are white supremacist code for “Jewish control.”) 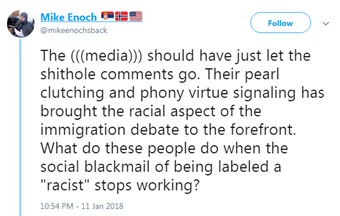 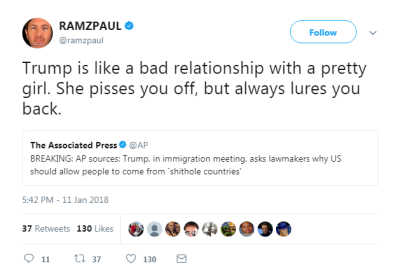 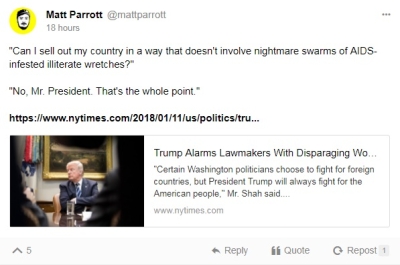 Lesser-known racists were even less restrained in their comments. On social media platforms frequented by white supremacists, an outpouring of hateful rhetoric followed President Trump’s comments.

On the white supremacist message board Stormfront, some forum members celebrated Trump’s remarks by stating this is the “best thing a President of the US has said in my lifetime.”  Another poster supported the President’s comments and noted that “third world non-white countries” are fleeing and migrating into White Western Countries… which only lowers our standard of living… White countries and ONLY White countries are being invaded.”  Yet another forum member stated, “At least somebody outside of us has the balls to say it” and then identified a “deep state operative” as the source for the leak.

Supportive posts on the Gab message board included the following:

Trump cannily not denying "shithole" remark. I'm feeling a bit embarrassed for having doubted him for a couple of days.

DFW Stormers @DFWStormers: The DFW Stormers would like to take this time to let everyone know that we think this type of rhetoric is fucking awesome...

Euro Diaspora @EuroDiaspora: Haiti is a shithole. Know why? In 1803 they massacred every White man, woman, and child in the country.

Pandora @AgentChaosx: Even better send them to those same shithole countries and watch them get torn apart by the rabid nigger population.

“General Franco Groyper” suggested that any immigrants from Norway should include the likes of Anders Breivik, a Norwegian white supremacist who killed 77 individuals in 2011 in a terrorist attack, and included a photo of Breivik in his tweet: