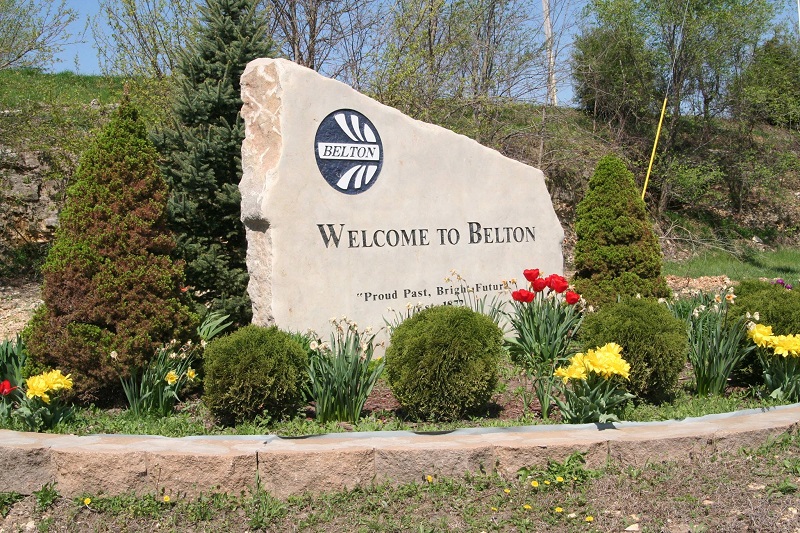 As the COVID-19 pandemic continues, white supremacists have increased their efforts to promulgate conspiracy theories blaming the coronavirus on Jews, Asians, and immigrants, and expressing their hope that the virus will target minority groups.

The vast majority of this coronavirus-related on-the-ground activity has consisted of posting offensive propaganda fliers and holding demonstrations. In one case, however, a white supremacist was shot and killed by the FBI as he accelerated a plot to bomb a hospital treating coronavirus patients.

On March 24, 2020, federal authorities planned to arrest 36-year-old Timothy Wilson, in Belton, Missouri, following the culmination of a long-running FBI domestic terror investigation. A sting operation set up to ostensibly supply Wilson with an explosive device culminated in a shootout, during which Wilson was shot and killed by law enforcement.

According to the FBI statement, Wilson, of Raymore, Missouri, allegedly planned to use a car bomb to blow up a local hospital currently coping with the coronavirus outbreak in “an attempt to cause severe harm and mass casualties.”  Wilson reportedly discussed other possible targets, including a school with a large African-American student population, a synagogue and a mosque, but authorities believe the COVID-19 pandemic accelerated his plan to commit an act of domestic terrorism against a medical facility.  Wilson apparently felt a sense of urgency to act after Belton’s mayor issued a stay-at-home order on March 24. Officials described Wilson as a “potentially violent extremist, motivated by racial, religious and anti-government animus.”

According to ADL’s HEAT map, which tracks incidents in which gunfire is exchanged between police and extremists, this marks the 96th extremist-police shootout in the last ten years and the sixth such incident involving right-wing extremists in Missouri since 2013.

In his piece Heartland Terror, The Informant’s Nick Martin identified Wilson’s apparent Telegram handle as “Werwolfe 84.” Pointing to Wilson’s possible motivation, The Informant flagged one of Werwolfe 84’s posts referencing antisemitic coronavirus-related conspiracy theories that the pandemic is a tool for Jews to expand their global influence.  The user stated, “If you don’t think this whole thing was engineered by Jews as a power grab here is more proof of their plans. Jews have been playing the long game we are the only ones standing in their way.”

Wilson appears to be one of three individuals who received a membership patch during a November 9, 2019, NSM meeting in Ulysses, Pennsylvania. During the ceremony, NSM regional leader Daniel Burnside refers to him as “Tim” as he hands him a patch. 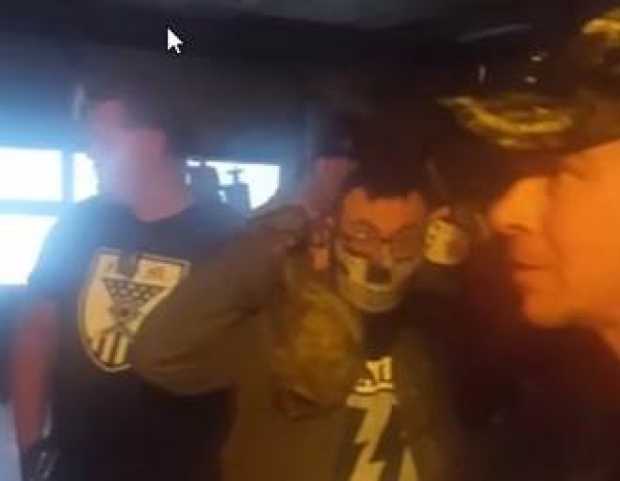 Werwolfe 84 was also active on the Vorherrschaft Division (VD) channel.  VD, which draws its name from the German word for supremacy, embraces extreme white supremacist views.  In line with other accelerationist groups, they advocate for violence against Black people, the LGBTQ+ community, Jews and others.

Werwolfe 84 also expressed his admiration for Robert Jay Mathews, leader of The Order, also sometimes known as Brüder Schweigen or the Silent Brotherhood. In the mid-1980s, members of this Pacific Northwest white supremacist terrorist group committed assassinations, armed robberies and bombings in an attempt to spark a white revolution.  In a January 22 Telegram post, Wilson wrote, “We need more men willing to stand up for our race like he did… the order [sic] will rise from the ashes.”

Wilson’s plan to attack a hospital appears to echo some white supremacists’ desire to accelerate the breakdown of society and spark a race war, sometimes referred as the Boogaloo. More on this below.

White supremacist groups use propaganda to spread their message, recruit new members and spark fear in targeted communities. American Identity Movement, New Jersey European Heritage Association, and Hundred-Handers, all contributors to the increase of propaganda distributions in 2019, have recently updated their racist, anti-immigrant, antisemitic materials to include references to coronavirus, directly blaming the spread of the virus on immigration, Jews and China.

On five occasions between February 11 and March 18, 2020, AIM associates distributed propaganda featuring a Corona beer bottle and the phrases “Immigration kills” and “Made in China.” 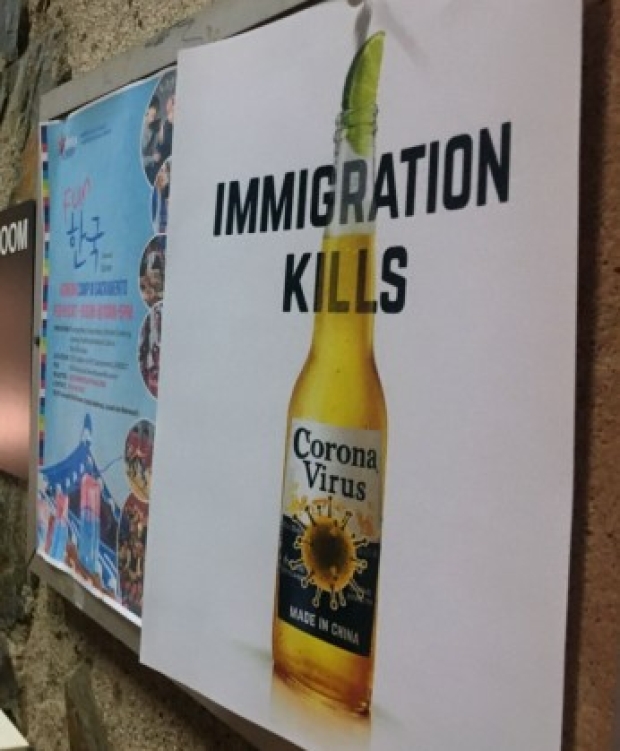 New Jersey European Heritage Association likewise updated their propaganda, tageting immigrants, Jews and globalists in the context of coronavirus. The group claimed credit for propaganda that appeared in New York, New Jersey and Florida between March 20th and 25th.  The materials read: “Open borders is the virus,” “(((Media))) is the virus,” “Multicultural is the virus,” “Globalism is the virus,” and “Stop Coronavirus Deport all illegal aliens! Close the borders! Stop Immigration!” 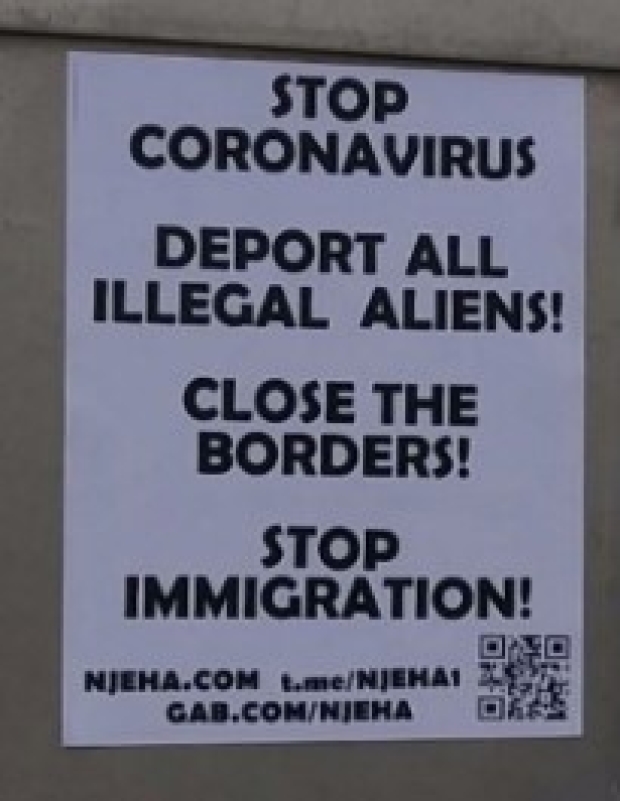 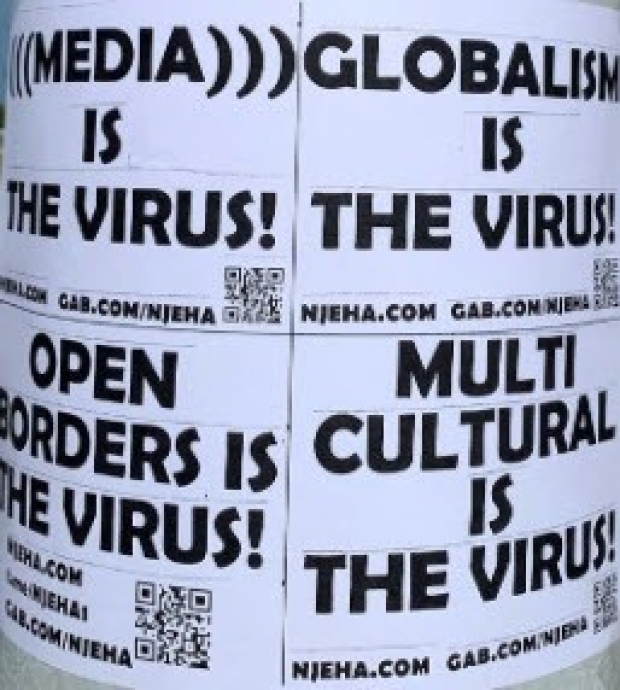 On March 23, Hundred-Handers, an international white supremacist group responsible for sticker distributions across Europe and the U.S., posted a new nationalistic, anti-immigration sticker to social media, depicting the coronavirus crossing a border and the phrases, “They could have prevented this” and “Nationalism would have prevented this.” 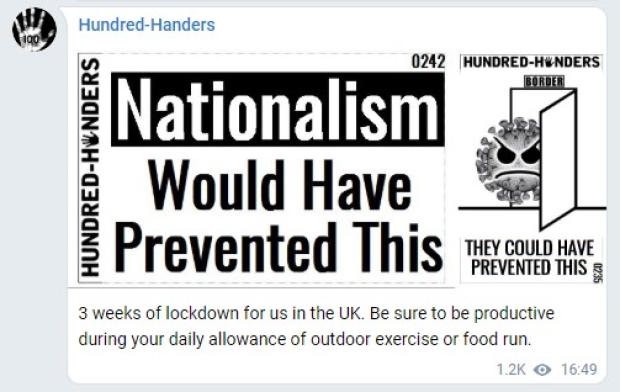 In terms of individual responses to the pandemic, white supremacists are pairing recommendations of stockpiling food and weapons, living off the land and staying physically fit with calls for resistance against the government and law enforcement. Conspiracy theories, often blaming immigrants, Jews and other marginalized groups for the spread of coronavirus, add to the arguments encouraging racial conflict. For some accelerationists, the government’s attempts to manage coronavirus have highlighted the weaknesses of the United States’ infrastructure, further proving the need for immediate change – brought about by the wholesale destruction of “the system.”

While some white supremacists believe COVID-19 is a manufactured bioweapon, others see the pandemic as an opportunity to speed up the elimination of their perceived enemies. Online, they encourage infected individuals to intentionally spread the virus to Jews, law enforcement officers, politicians and other populations. It should be noted that none of this online chatter has resulted in any actual activity, and the likelihood of anyone being intentionally infected by a white supremacist is extremely low. 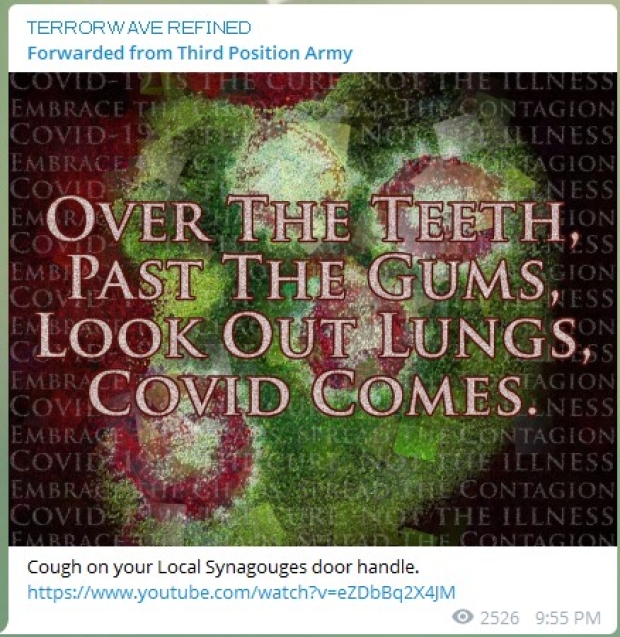 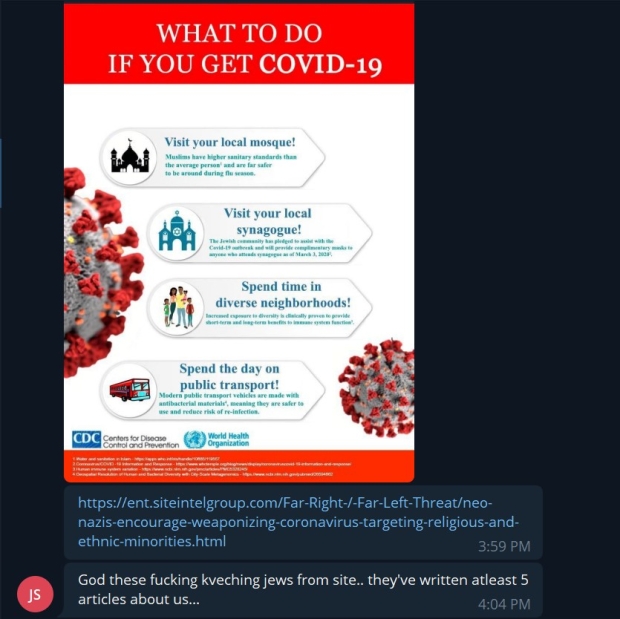