It is not unusual for white supremacists to target young people who have not yet matured and are susceptible to new ideas. The original mission statement of the Traditionalist Youth Network, a largely inactive white supremacist group founded by Matthew Heimbach and Matt Parrott, called for outreach to high school and well as college students.

At least half of the incidents at high schools have occurred in California. One occurred in Georgia and one was in an unidentified location. 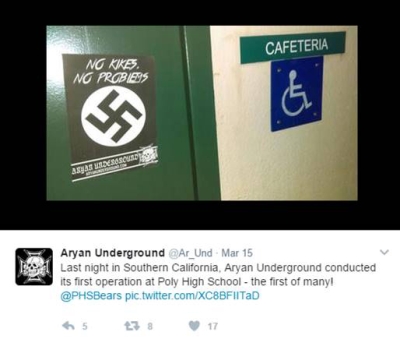 While there does not appear to be an influx of high school students in the white supremacist movement, students may still be influenced by groups promoting racist and anti-Semitic ideas. In January 2017, a group of seniors at Cypress Ranch High School in Houston raised their arms in a Nazi salute in a class photo. A student who reportedly witnessed the incident claimed that about 70 students participated and some shouted, “Heil Hitler” and “Heil Trump.” The students who participated in the gesture were later disciplined.