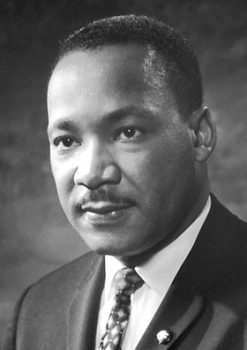 Though no march permit has yet been filed with town officials, Anglin today announced a date for his purported march, January 16, calling it the “James Earl Ray Day Extravaganza.”

This is no coincidence.

“Everybody remember,” posted one person on Facebook to the Sons of Odin Indiana on January 2, “that ‘JAMES EARL RAY DAY’ is coming up on the 16th.”  Another Facebook user asked on January 5, “what’s everybody going to be doing on James Earl Ray Day??  I’m celebrating to the fullest.”

Similar sentiments can be found each January on white supremacist forums such as Stormfront, where racists there wish each other a “Happy James Earl Ray Day.”

Though some people may be distressed by such blatantly racist sentiments, they actually are essentially sour grape expressions by white supremacists embittered that Martin Luther King, Jr. has become so widely embraced as a hero by Americans young and old. The holiday stands out as a profound example of how American society has rejected what white supremacists stand for.

Unfortunately, white supremacists do not always limit their anti-King sentiments to expressions on the Internet.  It is common, for example, for some Ku Klux Klan groups around the country to plan Klan flyerings over MLK, Jr. Day weekend, in order to draw attention.

The holiday can even attract violence:  in 2011, white supremacist Kevin Harpham tried to bomb a Martin Luther King, Jr., memorial march in Spokane, Washington.  Luckily, the bomb, hidden inside a backpack, did not successfully detonate and was subsequently discovered. Harpham was caught and is currently serving a 25-year sentence for the attempted terrorist act.