The Women Facing Charges for January 6, 2021 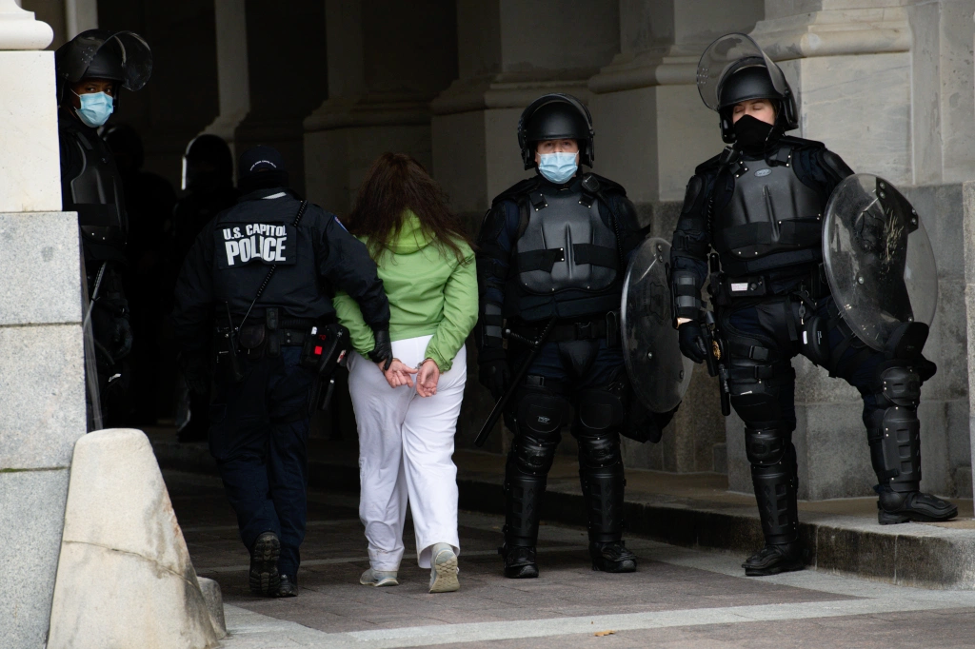 The best-known images from the January 6 rally and assault on the U.S. Capitol largely feature men, decked out in camouflage, MAGA hats and QAnon paraphernalia.

But women made up about 14 percent of those who have been charged in relation to activity that day. This is an unusually high number of women for a right-wing extremist event, which is attributable at least in part to the high concentration of QAnon supporters at the January 6 events, and to the significant number of women among former President Trump’s most ardent supporters.

As of March 16, 2021, four female Oath Keepers face conspiracy charges, two women are charged with passing police barricades and one woman faces charges for threatening to shoot FBI agents who were investigating her possible participation in the Capitol siege. The remaining women face lesser charges of trespassing or violating curfew. At least two were military veterans; Ashli Babbitt served in the Air Force and Jessica Watkins is an Army veteran.

These women work in a huge range of professions; they are beauticians, doctors, florists, realtors, teachers and business owners. One is a mom with eight kids. They apparently showed up on their own, or with their husbands or partners, brothers and sons. And some, including Babbitt, led the crowds on the ground, while others allegedly shouted instructions into bullhorns, calling for “gas masks,” “weapons” and “strong, angry patriots” and advising the group that they had “another window to break.”

Two women died on January 6: QAnon supporter Babbitt was shot and killed by Capitol police as she attempted to breach a barricaded door leading to the Speaker’s lobby. Rosanne Boyland of Georgia, a vocal Trump supporter, was reportedly trampled in a stampede outside the Capitol doors.

Fourteen of the women charged for activity on January 6 are affiliated with established right-wing extremist groups or movements. Six QAnon adherents are charged, along with the four Oath Keepers, one white supremacist, one Three Percenter, one woman who attached herself to a group of Proud Boys and one who traveled with the alt lite “Super Fun Happy America” group.

Given women’s leadership positions within the QAnon community, it comes as no surprise that this extremist segment had the highest number of women adherents at the January 6 events.

Militia style anti-government movements – including militias, Boogaloo, Three Percenters and Oath Keepers – are less obviously attractive to women. The groups cater to a primarily male fantasy of militarized resistance to “tyranny.” That said, there are a number of women involved in the movement, including a few in leadership roles. Anti-government extremists tend to respect skills, and if you’re a woman who knows how to break down a gun or shoot a target, or who’s qualified to perform first aid, men are likely to allow you to participate. It’s worth noting that the four female Oath Keepers who entered the Capitol on January 6 moved through the crowds in a practiced military “stack” formation.

The woman who traveled with the Proud Boys appears to have come with her brother; the Proud Boys are a defiantly chauvinistic group and are unlikely to have welcomed her on her own.

The one female white supremacist who has been charged for her actions at the Capitol is certainly an outlier; white supremacists are profoundly sexist. The misogyny is baked into the movement, and women are expected to carry out only the most traditional roles: cooking, cleaning and making white babies. The woman who was arrested appears to be unaffiliated with any group but has adopted accelerationist views – the most extreme iteration of white supremacy.