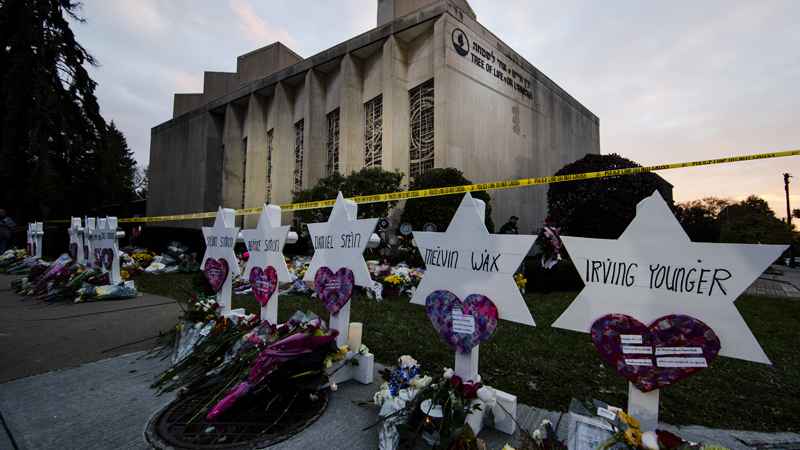 In the hours and days following the horrific anti-Semitic shooting in Pittsburgh’s Tree of Life synagogue, condolences and sympathies for those killed and injured poured in from individuals, communities and world leaders from across the globe. From Europe, to Australia, to Latin America, to the Middle East, the US government and US Jewish community were inundated with sympathies and expressions of sorrow for the eleven Jews who lost their lives while in synagogue during Shabbat morning services. Below is a sampling of statements issued by world leaders and international institutions:

Argentine Foreign Ministry: “The Argentine government strongly condemns the shooting on Saturday at the Synagogue "The Tree of Life Congregation" in Pittsburgh, in the United States, which caused many deaths and injuries. This tragic event provokes our firm repudiation and we express solidarity with the People and Government of the United States, extending our condolences to the relatives and friends of the victims. Argentina rejects this hate crime that threatens the essential freedom of every human being to be able to profess his faith with absolute respect and repudiates acts of intimidation against freedom of worship and, particularly, any manifestation of anti-Semitism.”

Australian Prime Minister Scott Morrison: "The evil shooting of innocent Americans gathering together in faith in their synagogue in Pittsburgh is truly awful.   We send our love to their families and their community and to our own Jewish community here in Australia as they hear this terrible news."

Bahrain’s Government: “Bahrain has condemned the shooting that targeted a synagogue in Pennsylvania, United States of America (USA), and resulted in multiple casualties and injuries. "The Ministry of Foreign Affairs expresses its deep condolences to the victims’ families, wishing a speedy recovery to those injured as a result of this heinous act,"  according to the ministry statement issued today. The ministry also affirmed "its support and solidarity with the United States, in all the measures it takes to ensure safety and security, reiterating the Kingdom’s firm stance against all forms of violence and extremism."”

Brazilian Foreign Ministry: “The Brazilian Government has learned with great consternation of the attack carried out today against a synagogue in Pittsburgh, Pennsylvania, United States, which has caused numerous fatalities and injuries.Expressing its deep condolences to the families of the victims, as well as their solidarity with the American people and Government, the Brazilian Government reiterates its most vehement condemnation of any act of violent extremism or terrorism.”

British Prime Minister Theresa May: “I’m deeply shocked by the reports of a shooting at a synagogue in the US today. Our thoughts are with the Jewish community in Pittsburgh and all those affected by this sickening and cowardly act.”

Canadian Prime Minister Justin Trudeau: “Canadians’ hearts are with the Jewish community in Pittsburgh today, as they endured a horrific anti-Semitic attack while at prayer. May the families of those murdered be comforted, and may the injured recover quickly and fully.”

Colombian President Iván Duque: “All our solidarity with the Jewish community and with the families of the fatal and injured victims after the attack that took place today in a synagogue in Pittsburgh, United States. Our total rejection of this atrocious anti-Semitic act.”

French President Emmanuel Macron: “I strongly condemn this horrific act of antisemitism in Pittsburgh. All my thoughts to the victims and my sympathy for their beloved ones.”

German Chancellor Angela Merkel: “I grieve for those who died in Pittsburgh, who apparently became the victims of a blind anti-Semitic hatred. My condolences to the families, I wish strength and recovery to the injured.”

Mexican Foreign Minister Luis Videgaray: “We condemn the abominable attack that occurred this morning in Pennsylvania, USA. Our condolences to the victims, and to the entire American Jewish community. Hate crimes must be repudiated and fought in the most categorical way in our societies.”

Oman’s Embassy: “We want to express our most sincere condolences to you and all the American and Jewish community. Our thoughts are with you and to the families of the 11 victims. Words fall short of expressing our sorrow for your loss of this horrific tragedy. May Allah’s Peace be upon you and the families.”

Organization of American States Secretary General Luis Almagro: “Another shooting, more dead without meaning, a reprehensible anti-Semitic attack that should be a wake-up call for all our societies. It is necessary to put an end to so much insanity.”

Panamanian President Juan Carlos Varela: “We strongly condemn and regret the acts of violence aroused in a synagogue in the United States; Our solidarity with the entire Jewish community in the world and with the families of the victims. We call for tolerance in search of peaceful coexistence.”

Polish President Andrzej Duda: “Both I and my Countrymen are shaken by news coming from the United States. I convey in my own name and on behalf of the whole Polish nation expressions of deep sympathy over the occurrence of an attack of anti-Semitic nature committed at the 'Tree of Life' synagogue in Pittsburgh, in which the lives were taken of many innocent people gathered to pray."

Qatari Government: “The State of Qatar strongly condemns Pittsburgh shooting in Pennsylvania, in the United States, which resulted in several deaths and injuries, the Ministry of Foreign Affairs reiterated Qatar's firm stance rejecting violence and criminality regardless of their motives and reasons.”

Saudi Arabian Embassy: “The Embassy expresses its sincere condolences to the American people and to families of victims of the violent incident at a synagogue in Pittsburgh today. Houses of worship are meant to provide safe and spiritual refuge. Those who desecrate their sanctity attack all humanity.”

Ukrainian President Petro Poroshenko: “‘Shocked by the horrific shooting at the Tree of Life Synagogue in Pittsburgh. Nothing could justify this wild act of intolerance and hatred based on antisemitism and racism.  At this difficult moment, we mourn together with our American friends. My most sincere condolences go to the families and relatives of those perished and wounded in this terrible tragedy.”

United Arab Emirates Ambassador Yousef Al Otaiba: “The UAE extends its deepest sympathies to the families of loved ones harmed by the senseless violence in Pittsburgh today. We condemn acts of hate against any people because of their religion, race or beliefs.”

United Nations Secretary General Antonio Guterres: “The Secretary-General is deeply shocked at and strongly condemns the shooting today at the Tree of Life Congregation synagogue in Pittsburgh in the United States. He expresses his deepest condolences to the families of the victims. The shooting in Pittsburgh is a painful reminder of continuing anti-Semitism. Jews across the world continue to be attacked for no other reason than their identity. Anti-Semitism is a menace to democratic values and peace, and should have no place in the 21st century. The Secretary-General calls for a united front -- bringing together authorities at all levels, civil society, religious and community leaders and the public at large -- to roll back the forces of racism, anti-Semitism, Islamophobia and other forms of hatred, bigotry, discrimination and xenophobia gaining strength in many parts of the world.”