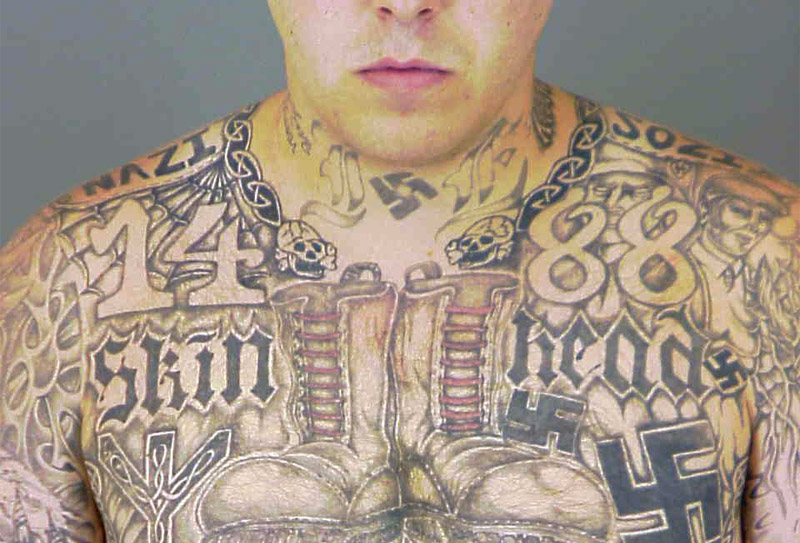 At ADL’s Center on Extremism, we’ve spent years monitoring and reporting on white supremacists and their beliefs. We’re experts on the groups and ideologies that populate this tiny but vocal subsection of society, but for anyone just learning about these movements, the lexicon can be overwhelming. With that in mind, we’ve created this glossary of terms that come up frequently in conversations and news reports about this particular form of extremism.

A concept used to describe religious, social or political belief systems that exist substantially outside of belief systems more broadly accepted in society (i.e., “mainstream” beliefs). Extreme ideologies often seek radical changes in the nature of government, religion or society. Extremism can also be used to refer to the radical wings of broader movements, such as the anti-abortion movement or the environmental movement. Not every extremist movement is “bad”—the abolitionist movement is one example of an extreme movement that had admirable goals—but most extremist movements exist outside of the mainstream because many of their views or tactics are objectionable.

The alt right (short for “alternative right”) is a segment of the white supremacist movement consisting of a loose network of racists and antisemites who reject mainstream conservatism in favor of politics that embrace implicit or explicit racism, antisemitism and white supremacy. Many seek to re-inject such bigoted ideas into the conservative movement in the United States. The alt right also includes many racist users of image boards and message forums such as 4chan, 8chan and Reddit who enjoy harassing or “trolling” people who disagree with their views.

Christian Identity is a religious sect and one of the longstanding segments of the white supremacist movement. Its beliefs center on a racist and antisemitic variation of British-Israelism or Anglo-Israelism, which teaches that people of European ancestry are actually descended from the so-called “Lost Tribes” of ancient Israel and are thus the chosen people of God. Identity believers claim that non-whites were created by God not when God made “man,” but rather when he created the “beasts of the field,” and they refer to non-whites as “mud peoples.” Many Identity adherents furthermore believe that Jews are descended from Satan through a sexual liaison between Eve and the serpent. They are not Christian fundamentalists, who strongly oppose their views.

Terrorism is a pre-planned act or attempted act of significant violence by one or more non-state actors in order to further an ideological, social or religious cause, or to harm perceived opponents of such causes. Significant violent acts can include bombings or use of other weapons of mass destruction, assassinations and targeted killings, shooting sprees, arsons and firebombings, kidnappings and hostage situations and, in some cases, armed robberies. Domestic terrorism consists of acts or attempted acts of terrorism in which the perpetrators are citizens or permanent residents of the country in which the act takes place and are not members or agents of foreign or international terrorist organizations.

The term “extreme right” is used to describe right-wing political, social and religious movements that exist outside of and are more radical than mainstream conservatism. In the United States, the extreme right consists primarily of two large, slightly overlapping spheres. In one sphere is the white supremacist movement, including its various submovements, such as neo-Nazis, racist skinheads, and the alt right, among others. In the other sphere are anti-government extremist movements such as the militia movement and sovereign citizens (collectively, this sphere is often referred to as the “Patriot” movement). Also in the extreme right are several “single-issue” movements, which each tend to be the extreme wing of a more mainstream conservative movement; these include anti-abortion extremists, anti-immigrant extremists, anti-Muslim extremists, and anti-public lands extremists, among others.

See Extreme Right; the terms are mostly synonymous. However, because some people use the term “far right” to also incorporate some aspects of mainstream conservatism, the term is more vague than extreme right or radical right and thus is not preferred.

A hate crime is a criminal act against a person or property in which the perpetrator chooses the victim because of the victim's real or perceived race, religion, national origin, ethnicity, sexual orientation, disability or gender. Some state-level statutory definitions in the United States may include additional (or fewer) categories. Hate crime and hate speech are not synonymous and most hate speech is not hate crime.

An organization whose goals and activities are primarily or substantially based on a shared antipathy towards people of one or more other different races, religions, ethnicities/nationalities/national origins, genders, and/or sexual identities. The mere presence of bigoted members in a group or organization is typically not enough to qualify it as a hate group; the group itself must have some hate-based orientation/purpose.

Holocaust Denial is a type of antisemitic propaganda that emerged after World War II and which uses pseudo-history to deny the reality of the systematic mass murder of six million Jews by the Nazis and their allies during World War II. Holocaust deniers generally claim that the Holocaust never happened, or that some much smaller number of Jews did die, but primarily to diseases like typhus. They also claim that legitimate accounts of the Holocaust are merely propaganda or lies generated by Jews for their own benefit.

Asatru is a religious sect that attempts to revive ancient Norse religious beliefs and practices of pre-Christian Europe. Asatru is not, in itself, a racist religion, though some white supremacists consider themselves Asatruists. Other white supremacists have adopted a more explicitly racial form of Asatru that is most frequently termed Odinism (sometimes Wotanism). It appeals to white supremacists because it is a “warrior religion” in contrast to the ostensibly pacifist Christianity, and because they consider it a “tribal” religion for people of European descent, as opposed to the more universal Christianity, which was also descended from Judaism. Odinists and racist Asatruers will often describe themselves as racialist, tribal or folkish.

Neo-Nazis are one of the main segments of the white supremacist movement in the United States and many other countries. They revere Adolf Hitler and Nazi Germany and sometimes try to adopt some Nazi principles to their own times and geographic locations, though many neo-Nazis primarily adopt the trappings, symbology and mythology of the Third Reich.

Racist skinheads are a variation of the skinhead subculture that arose in Great Britain the late 1960s and early 1970s and have come to compose one of the major segments of the white supremacist movement in the United States. In contrast to “traditional” skinheads or anti-racist skinheads, racist or “white power” skinheads adopt many neo-Nazi beliefs and trappings. At the same time, they share many common elements of the skinhead subculture, such as head shaving, clothing, tattoos and symbols, rituals, and music.

“White Genocide” is a term coined by white supremacists for propaganda purposes as shorthand for one of the most deeply held modern white supremacist convictions: that the white race is “dying” due to growing non-white populations and “forced assimilation,” all of which are deliberately engineered and controlled by a Jewish conspiracy to destroy the white race. This same conviction can be seen in the so-called “14 Words” slogan, the most popular white supremacist slogan around the globe: “We must secure the existence of our people and a future for white children.” White supremacists commonly claim that they must take action, even violent action, or the “white race” will “perish from the Earth.”

White nationalism is a term that originated among white supremacists as a euphemism for white supremacy. Eventually, some white supremacists tried to distinguish it further by using it to refer to a form of white supremacy that emphasizes defining a country or region by white racial identity and which seeks to promote the interests of whites exclusively, typically at the expense of people of other backgrounds.

"White Power" is a white supremacist slogan designed to mimic the "black power" slogan often used by African- Americans in the 1960s/70s. It is a commonly shouted at white supremacist events as a racist rallying cry.

"White Pride" is a white supremacist slogan appropriated from expressions of ethnic pride by various minority groups in the United States. White supremacists often use the slogan, or variations thereof, to deny any racism on their part, claiming that they are merely exhibiting "white pride."

White separatism is a form of white supremacy that emphasizes the idea that white people should exist separately from all inferior, non-white races, whether by establishing an all-white community somewhere or removing non-whites from their midst. Some white supremacists also use the phrase because they believe it may be more benignly perceived by others than the term “white supremacist.”

White supremacy is a term used to characterize various belief systems central to which are one or more of the following key tenets: 1) whites should have dominance over people of other backgrounds, especially where they may co- exist; 2) whites should live by themselves in a whites-only society; 3) white people have their own "culture" that is superior to other cultures; 4) white people are genetically superior to other people. As a full-fledged ideology, white supremacy is far more encompassing than simple racism or bigotry. Most white supremacists today further believe that the white race is in danger of extinction due to a rising “flood” of non-whites, who are controlled and manipulated by Jews, and that imminent action is need to “save” the white race.