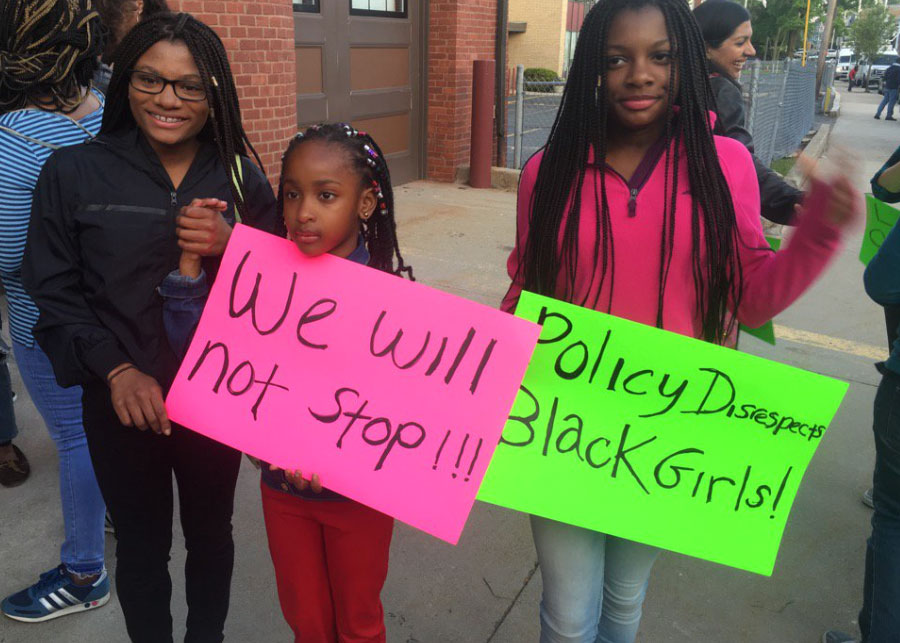 African-American twin sisters protest Mystic Valley Regional Charter school's policy on hair, May 2017. The twins had been barred from prom, suspended from sports an had to serve double detention as punishment for wearing hair extensions (braids) to school.

In May 2017, it was reported that a charter school in Massachusetts was disciplining several Black girls, including sisters Deanna and Mya Cook, for wearing their hair in braids with extensions. The students had been given detentions and were prohibited from participating in after-school activities, including sports, for violating the school’s Hair/Make-Up policy, a policy that many, including the Massachusetts Attorney General, says discriminates against students of color, especially young Black women. School officials at Mystic Valley Regional Charter School stated that the ban on hair braid extensions is designed to minimize distractions and to keep students' focus on education. Parents, students, advocates and state officials have said that the policy is racially discriminatory and singles out black students for punishment. The school’s policy and the two girls’ situation drew widespread attention as well as protest, leading a coalition of civil rights organizations to write a letter of concern and organize a rally outside the school before the school board’s emergency meeting about the issue. On May 21, the school’s Board of Trustees voted to suspend the hair section of the policy for the remainder of the school year. The Massachusetts Attorney General has an ongoing investigation into the substance and application of the “Hair/Make-up” policy.

This lesson provides an opportunity for students to reflect upon the important aspects of their own identity, learn more about the policy and situation at Mystic Valley Regional Charter School and consider their points of view about the school policy.