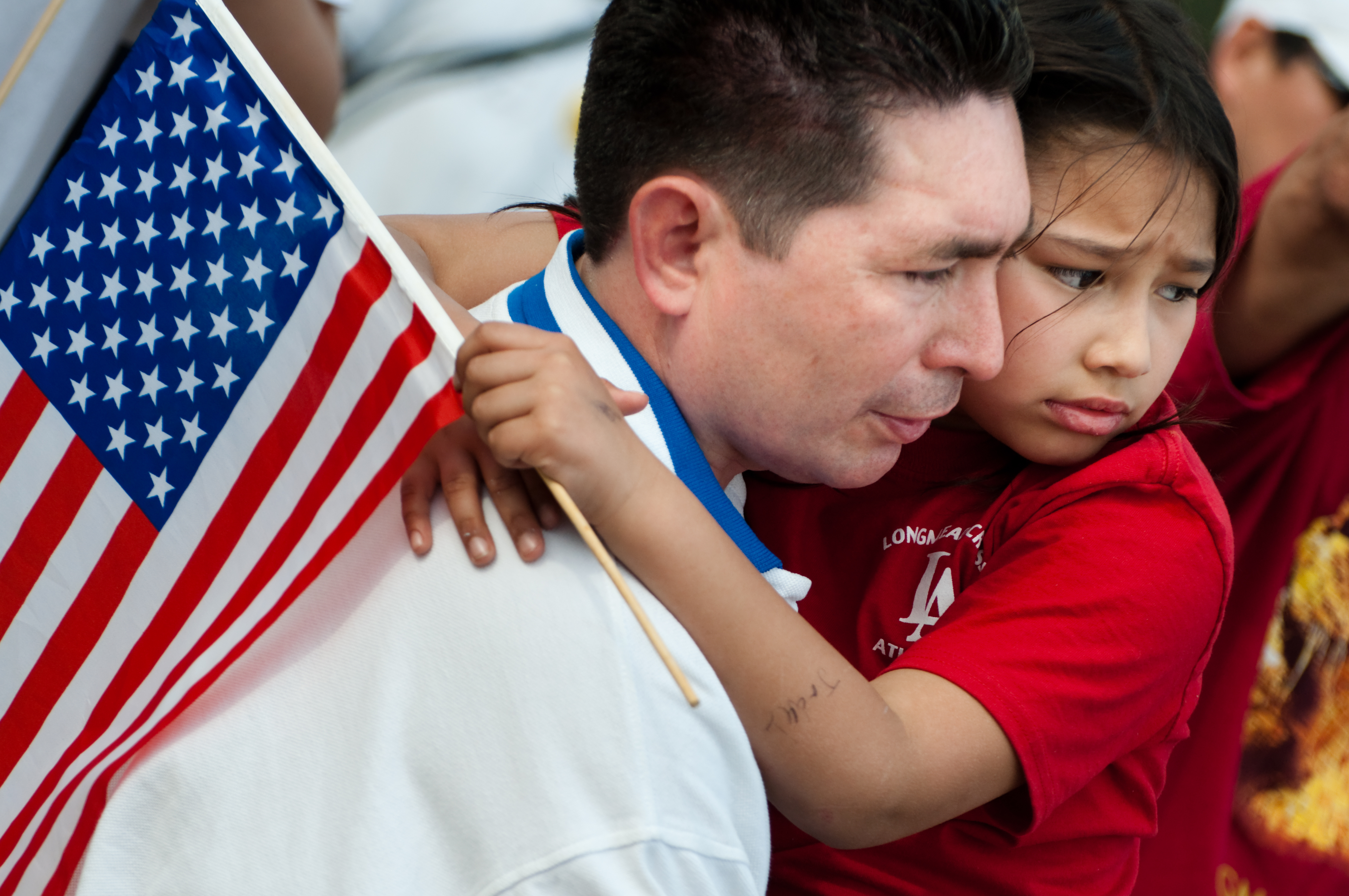 A girl and her father standing with some 200,000 immigrants' rights activists flooding the National Mall to demand comprehensive immigration reform, Washington, DC, March 21, 2010.

Remember that when you say “I will have none of this exile and this stranger for his face is not like my face and his speech is strange,” you have denied America with that word.  —Stephen Vincent Benét

When these words were published in 1943, the Alien Registration Act required the registration and fingerprinting of all immigrants to the U.S., President Franklin D. Roosevelt had recently authorized the transfer of Japanese Americans (including native born and U.S. citizens) to internment camps and the new Bracero Program—later described as a system of “legalized slavery”—brought tens of thousands of temporary agricultural workers to the U.S.

“We learn from history that we learn nothing from history,” wrote George Bernard Shaw. Following September 11th, a “Special Registration” program was established that required male immigrants over the age of sixteen from designated countries—mostly in the Middle East and South Asia—to be fingerprinted, photographed and interviewed.  Since that time, thousands of immigrants have been detained and deprived of basic civil liberties, and many thousands of others have been systematically exploited under a guestworker system that the Migration Policy Institute calls “today’s version of bonded labor.”

Fear and Bias: An Anti-Immigrant Climate of Hostility

The criminalization of immigrants in our laws and justice system has contributed to the mainstreaming of anti-immigrant fear and bias. Xenophobic rhetoric is a mainstay of today’s cable news and talk-radio outlets. Vigilante groups cloaked in patriotism stir up panic with claims of “hordes of invaders” spreading crime and disease. And communities across the nation have introduced “quality of life” campaigns that demonize the mostly Latina/o day laborers and migrant workers on which our economy has come to depend. The climate of bias and hostility in the broader society filters down to our schools and impacts the ways in which young people view and interact with their peers from different countries and cultures.

About this Curriculum Unit

This set of lesson plans helps students to build empathy and understanding for the experiences of immigrants, appreciate the integral role that immigrants have always played in U.S. life, heighten their awareness about the negative effects of anti-immigrant bias and challenge discrimination on personal and institutional levels.

George Bernard Shaw may have been cynical about our capacity to learn from history, but he also said that “we are made wise not by the recollection of our past, but by the responsibility for our future.” Teaching today’s children to see beyond anti-foreign stereotypes and to look at our nation’s immigration challenges in thoughtful ways is a certain way to build a better tomorrow.

Grades 3-5 — What is it Like to be an Outsider?”: Building Empathy for the Experiences of Immigrants

Grades 6-8 — “They Don’t Know Me”: Exposing the Myths and Establishing the Facts about Immigration

Grades 9-12 — “Walling Out the Unwanted”: Understanding the Barriers that Perpetuate Anti-Immigrant Bias