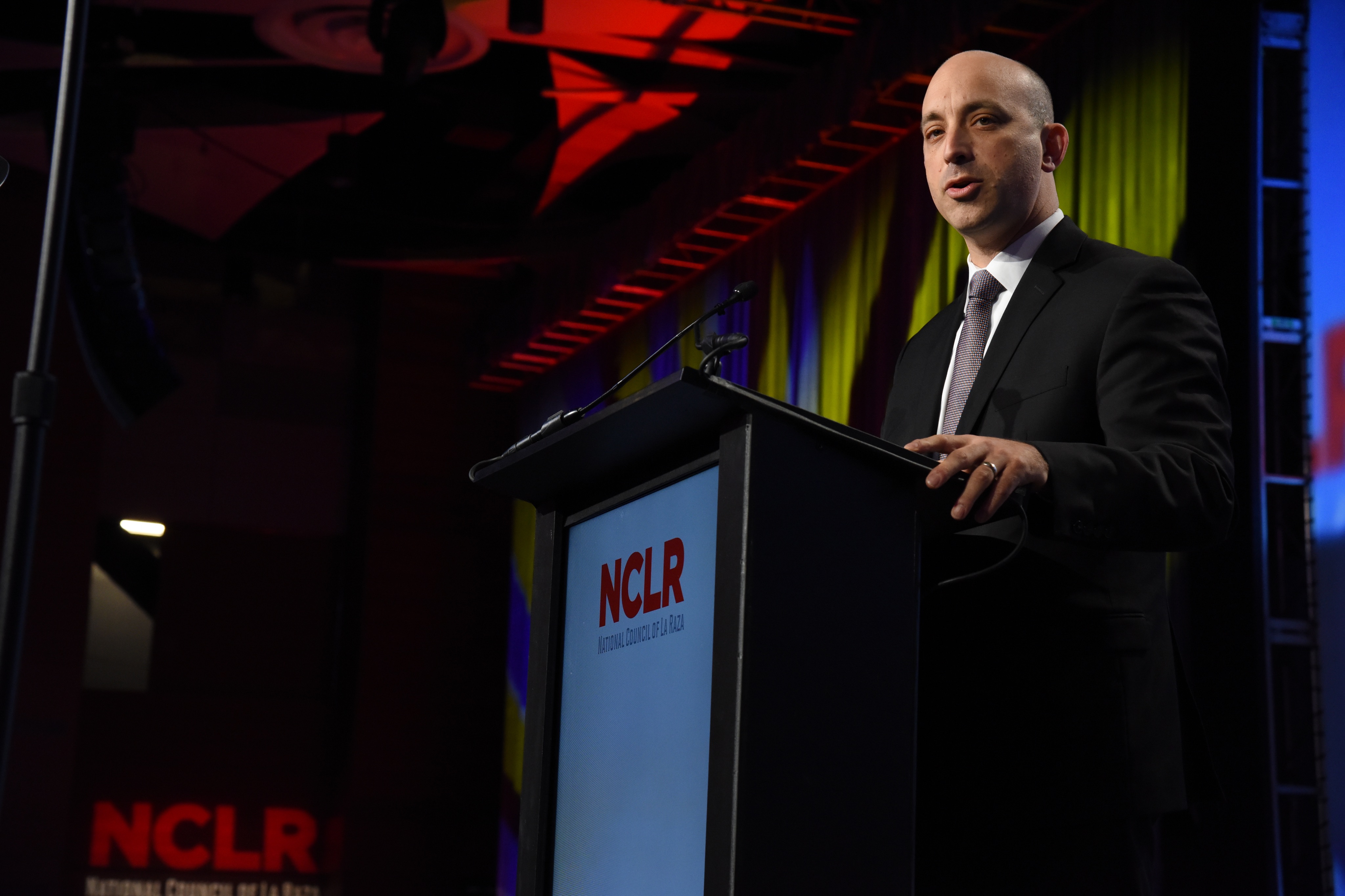 Responding to Hate: Information and Resources

Hello NCLR! It’s so good to be here with all of you.

I appreciate the kind introduction. Before diving into my speech, I extend my warm greetings to NCLR Board Chair, Renata Soto and to the entire board of directors.

I also want to point out that my organization, the ADL, has a presence throughout the United States including here in Arizona. In fact, tomorrow will be the one-year anniversary of Arizona’s Regional Director, Carlos Galindo-Elvira, who came to us from one of NCLR’s affiliates, Valle del Sol.

But this is not just the anniversary of Carlos’ first day at ADL. In fact, today July 10th is the anniversary of the founding of ADL – and our organization was founded more than 100 years ago on July 10 1913. So this is our 104th birthday. And I could not be more proud to be celebrating our birthday with all of you.

This room feels to me like a reunion, casi como una reunión familiar. While we may not see each other all the time, ADL and NCLR have a long history together. We are proud to be part of your movimiento. Janet spoke at ADL’s national conference in D.C. just this past May, and we’ve been seeing each other a lot more these days. And there’s a reason for that.

In times of trouble, we turn to family. I’m afraid these are, indeed, troubled times. At the ADL, where our mission for more than 100 years has been to fight hatred and bigotry of any kind, we have been busier than ever in just the past several months. And I know the same is true for Janet, for all the hardworking staff at NCLR around the country, and for all of you in this room, because all of you have been on the front lines with us fighting hate each and every day.

I don’t think it will come as a surprise to any of you when I say that we have seen a spike in hatred in this country, from dog whistles to outright slurs, heartbreaking bullying to horrifying hate crimes. Anti-immigrant, anti-Muslim, and anti-Semitic sentiments and incidents are on the rise.

Looking broadly, the most recent FBI hate crime numbers documented a total of 5,850 hate crimes in 2015, a seven percent increase over the prior year.

At ADL, we often talk about the pyramid of hate, la piramide de odio.

We use this image because it’s a helpful way to think about hate. The layers at the bottom are by far the most widespread—and the things that lay the groundwork upon which other forms of hatred can grow and thrive.

The base of the pyramid of hate consists of the prevalent biases that persist—the stereotypes, the belittling jokes, the non-inclusive language, the micro-aggressions. They’re widespread but low-level and do not result in direct harm to an individual.

Left unchecked, bias lays the groundwork for individual acts of prejudice, the next level up on the pyramid of hate. This includes things like name-calling, slurs and epithets, de-humanization and bullying.

You may remember a video that ADL and NCLR made together some years ago called Code Words of Hate. What we exposed in that video—and what we are hearing even more intensely today—is that words that were once used only by white supremacists, the KKK and – more recently – the so-called Alt-Right, have moved from the margins to the mainstream.

For years, ADL has been tracking extremist movements and monitoring how their messaging and messengers cross over into the mainstream.

Now, on the nightly news and in the halls of government, in speeches by political candidates and tweets from the president himself, we are hearing words that dehumanize immigrants and demonize refugees. We are hearing terms like “sanctuary city,” a phrase coined by the anti-immigrant movement years ago as a derogatory term.

And such words have a profound impact on our children. And in the days and weeks surrounding the election, the phones rang off the hook at ADL offices around the country as we received countless calls reporting horrific bullying.

For example, in a junior high school in Michigan, students formed a physical “wall” to block Latino students from reaching their classrooms and lockers. In Pennsylvania, students carved swastikas on bathroom walls, gave the Heil Hitler salute, yelled anti-gay slurs, used the n-word, and called black students “cotton pickers.” And these are just few stories. I have many more.

To fight against such bias, ADL uses three approaches:

Now, our advocacy work is driven by a robust civil rights team that works in state legislatures around the country to oppose discrimination.

Last month, we testified against a set of anti-immigrant bills in Louisiana that would have defunded sanctuary cities and made it almost impossible for immigrants to marry in the state. Fortunately, we—along with a lot of coalition partners that turned out in force to testify—were able to kill the bills.

But we were not as successful in Texas…at least not yet. NCLR and ADL and so many of our partners have been fighting against one of the most discriminatory anti-immigrant bills we have seen to date—it is as bad or maybe even worse than SB 1070, Arizona’s infamous anti-immigrant bill. SB 4 in Texas, which not only defunds sanctuary cities but creates criminal penalties for police that refuse to cooperate with ICE, has already been challenged in court, and we’ve been working with coalition partners to block the law from going into effect.

So those are the first three levels of the pyramid: bias, individual acts of prejudice, and discrimination. Left unchallenged, these phenomena come together to create an environment that’s ripe for bias-motivated violence.

For example, two men in Boston brutally beat a homeless Latino man, in January, whose only crime was being in the wrong place at the wrong time. When police arrested the perpetrators they said, “all these illegals need to be deported.”

So what can we do about all this hate? ¿Cómo luchamos en contra del odio? Creo que la respuesta es la unidad.

Let me say it again. The answer is unity. ¡Estamos unidos!

Unity that brings together people of different faiths, different ethnicities, different national origin but who share a similar commitment to this country and to the values that have made it great for 241 years.

Through unity, we can challenge hate—at every stage, in every instance, and in every way that we can. When we hear a bigoted joke at the water cooler, we need to speak up. When we see a stereotype shared on Facebook, we need to call it out. When we hear a comment at the dinner table, we must model for our children and teach them with action, not just words, that it just isn’t permissible to denigrate others because of how they pray, where they’re from, or who they love.

Beyond settings like our homes, school and workplaces, we must demonstrate unity and lock arms as we challenge discriminatory laws, using every tool in our toolbox and at every stage. We must rise up and say, ¡basta! enough!

And, more than anything, we must confront hate-fueled violence and ensure that those who commit crimes based on identities pay the highest price possible. To do that we need comprehensive hate crimes laws. And here I want to say thank you, because when ADL announced its 50 States Against Hate Campaign almost two years ago, to ensure that we have comprehensive hate crimes laws on the books in all 50 states, NCLR was among the very first to say “Count us in.” Indeed, juntos podemos!

And I can share with you that, today, the ADL is working with the Government of Mexico to assist Mexican consulates across the US and training their consular staff in all these offices on how to fight harassment as well as to identify and report hate crimes.

That’s why we are now working closely with the Mexican government and talking to other governments to help them establish reporting mechanisms on their consular websites so that anyone who experiences or witnesses a hate incident can have a place to report them. This cloud-based Spanish-language tracking system will help us to aggregate data on hate incidents and activity in the U.S, including crimes that people might otherwise be afraid to report to police. The reporting process will be up and running before the end of the summer.

I believe that, if we work together and challenge hate at every turn, we can create an environment in which there is no place for hate. We can show that building walls is no answer – instead we need to build bridges of trust and partnerships.

As I said at the beginning, we are living in troubled times, but these are the scenarios that led to the creation of our organizations in the first place. And on this day, on ADL’s 104th birthday, I am filled with a sense of hope.

In 1913 when the ADL was founded, anti-Jewish hate was rampant across the U.S. Jews could not live or work simply where they wanted; they were denied entry to universities and businesses right here in America; and right around the time of our founding, Leo Frank, a Jewish businessman in Atlanta, was falsely accused of a crime, found guilty in a sham trial, and, then dragged from his prison cell by an angry mob and brutally lynched.

In that moment when the future of Jews in this country was uncertain, when our community lacked political power or economic resources, a small group of Jews came together and created ADL. These activists wrote a charter for this new organization and they built into the founding creed of ADL a commitment both to “stop the defamation of the Jewish people AND to secure justice and fair treatment to all.”

These founders believed that you could not have one without the other. To truly make America a place for Jews to thrive, all people needed to be treated fairly. And to have a country where all are equal, anti-Semitism and bigotry against Jews could not be tolerated.

In the words of John Kennedy in his book A Nation of Immigrants: “Every ethnic minority in seeking its own freedom, helped strengthen the fabric of liberty in American life.”

These immigrants are our future. They are young, dynamic, and innovative members of our society energetically enriching our nation through their involvement and passionate voices. They strengthen the fabric of America. They are Dreamers. They are doers.

So who are these immigrants, these dreamers, these doers? Let me tell you, they were my grandparents. And another one of them is my wife of 17 years. But they are all of our spouses and all of our children. They are our present and our future.

And we stand together, juntos, against all forms of hate: anti-Semitism, racism, Islamophobia, xenophobia, misogyny, homophobia. Estos son nuestros valores. These are values shared by ADL and NCLR.

So thank you for helping me to celebrate our birthday and let’s recommit to working together, trabajando juntos para crear un mundo sin odio, a world without hate.