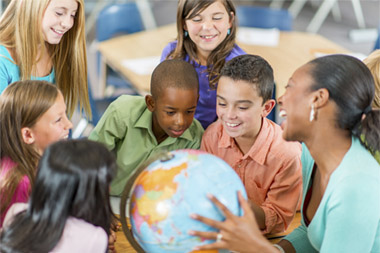 How is social and emotional learning (SEL)--which is now an established and critical part of the school experience--connected with anti-bias education? If we want to help young people understand bias and work on social justice, what does SEL bring to the table?

According to Collaborative for Academic, Social and Emotional Learning (CASEL), social and emotional learning is "the process through which children and adults acquire and effectively apply the knowledge, attitudes, and skills necessary to understand and manage emotions, set and achieve positive goals, feel and show empathy for others, establish and maintain positive relationships, and make responsible decisions."

The term "social and emotional learning" was popularized in 1995 with the publication of Daniel Goleman's book Emotional Intelligence, though the term was actually coined several years before by Peter Salovey and John D. Mayer. SEL gained prominence after the 1997 publication of Promoting Social and Emotional Learning: Guidelines for Educators.

Several hundred experimental, control-group studies have documented the positive effects of SEL programming on children of diverse backgrounds from preschool through high school. Such programs have been shown to improve students' social skills, reduce aggression and behavior problems, improve attendance and academic performance, and reduce depression.  They have also been shown to improve the classroom climate for learning.  CASEL has compiled descriptions of SEL programs that have proven to be most effective.

Over the past twenty years, educators have developed a wide variety of approaches and programs that come under the umbrella of SEL including: character education, conflict resolution and peer mediation, restorative justice and other alternatives to punitive discipline/suspension, bullying prevention, school climate work and more. Some of these do include explicit instruction on bias and social justice.

Anti-bias education is a distinct field. It is a comprehensive approach to help young people learn to actively challenge stereotyping, bias and all forms of discrimination. Anti-bias mastery skills include: understanding the various dimensions of identity; learning and applying basic terms relating to bias and discrimination; increasing understanding of the impact of culture and differences on communication; and recognizing, acknowledging and confronting bullying, bias and discrimination in themselves, others and within institutions.

Given the public conversation about bias and injustice--especially recently--several  prominent national education orga­ni­za­tions including the NEA, AERA, NCTE and AFT have called for address­ing equity in schools and soci­ety, specif­i­cally rec­om­mend­ing that educators and school leaders "receive the tools, training, and support they need to build curricula with substantive exploration of prejudice, stereotyping, and discrimination."

Anti-bias education and social and emotional learning intersect in a variety of ways.

As we introduce young people to sometimes delicate concepts like identity, diversity, stereotyping and bias, they will need SEL skills as the foundation for having those conversations in a productive way. In order to open up and discuss difficult topics, children need to feel safe and respected in their classrooms. They need to be able to communicate effectively to convey their point of view and understand what others are saying in words and body language. They need an expanded feelings vocabulary for the different emotions that may emerge when they interact with anti-bias material in the classroom and it will be useful to have productive ways to deal with those feelings. Finally, they need to learn how to work, learn and play collaboratively in small and large groups and among differences.

Empathy and perspective taking are key components of social and emotional learning. Being able to understand the perspective of different people and empathizing with their life's situations and struggles helps students accept differences and gain insight into how bias and discrimination impact different people. Empathy and perspective taking motivate students to take the next step and do something about the injustice they see in their world. We know that giving students skills and knowledge in bias and bullying are not enough--empathy and understanding are critical to get young people to want to make change, help other people or inspire them to be an ally.

There are many SEL programs that focus on social relationships between young people which explore friendship, cliques, name-calling and bullying. Biased or identity-based bullying, when a person gets bullied because of bias based on an aspect of their identity (i.e. race, religion, sexual orientation, physical appearance, gender identity/expression, etc.), is all too common in school and especially in the teenage years. Therefore, helping students explore identity and bias are very important components of being able to confront identity-based bullying.

SEL aims to help young people understand that we all need to take responsibility for ourselves and others - including our school, community, country and world. When we see an injustice, it is especially important that we take action as global citizens.  This reinforces the goal of anti-bias education:  to teach young people that despite the injustice in the world, we can all make a difference and that throughout history, people working together have created change through activism and legislation and by changing people's hearts and minds.

"Anti-bias education is a distinct field. It is a comprehensive approach to help young people learn to actively challenge stereotyping, bias and all forms of discrimination."