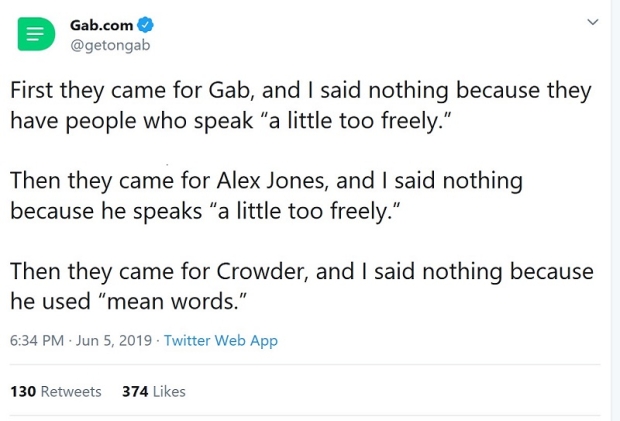 Recent incidents of white supremacist terrorist activity have prompted the public, researchers, and cyber hate and harassment experts to focus on smaller online message boards and forums like Gab and 8chan. These platforms rose to prominence by permitting any content to be posted, no matter how extreme, without consequence. In fact, they boast about being unhindered by content moderation niceties. A particularly worrying trend is the increasing reach and influence of these fringe platforms, despite having relatively small userbases. Extreme elements within these platforms accomplish this feat by leveraging and weaponizing Facebook and Twitter as unwitting accomplices.

There is little doubt that fringe platforms have helped radicalize users and normalize extreme and hateful language. For instance, Gab was frequented by the gunman who committed a massacre in a synagogue in Pittsburgh, where he would often share his anti-Semitic views, and where his actions were openly supported and applauded after the attack. One academic study quantified the prevalence of hate speech on the platform and found that Gab had 2.4 times the amount of hate that exists on Twitter. Similarly, 8chan received extensive press coverage because it was used to spread a white supremacist “manifesto” authored and shared by the gunman responsible for the massacre of 50 Muslims in Christchurch, New Zealand. Like Gab, 8chan is inundated with hate speech and conspiracy theories. In fact, research by ADL’s Center on Extremism and Network Contagion Research Institute show that racial slurs can go as high as 12 to 13 percent of all daily posts on 8chan and 5 to 6 percent of all daily posts on Gab.

These hate-filled fringe platforms are using mainstream social media platforms to amplify their reach and attract new visitors. Extremists can leverage Facebook and Twitter to ensure that the hateful philosophies that begin to germinate on message boards like Gab and 8chan find a new and much larger audience, since Twitter’s 300 million users and Facebook’s 2.4 billion dwarf the hundreds of thousands on these fringe sites today. Extremists make use of mainstream platforms in specific and strategic ways to avoid content moderation activity that Facebook and Twitter use to remove hateful content. These include creating private pages and events, as well as using coded language called dogwhistles to imply and spread a hateful ideology on mainstream platforms. Specifically, users who populate fringe platforms collectively leverage mainstream social media platforms in several concerning ways:

Links: Facebook and Twitter generally allow users to link to pages on these hate-filled sites, which allows visitors to mainstream sites to get to the content with little to no effort. For example, the below follower of QAnon not only tweets anti-Semitic conspiracy theories but also links to 8chan content that goes even deeper. Similarly, the below Facebook poster links to a Gab page that expresses additional hate. 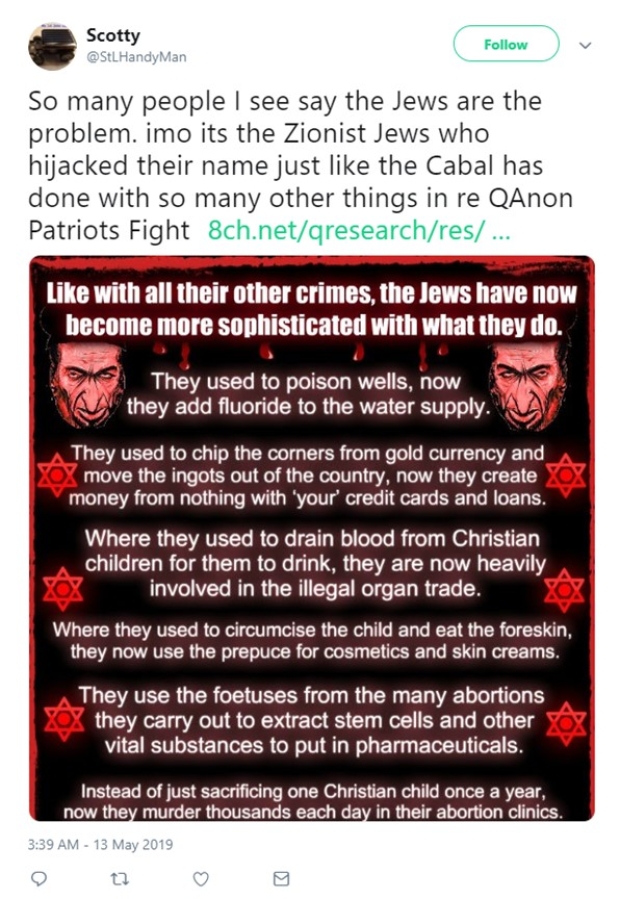 Profiles: Individuals on fringe platforms publicize their fringe accounts or posts on mainstream platforms. This allows them to get the benefits of a broad audience from mainstream social media and is a tool used to drive users to other sites, where they can make hate-filled, discriminatory and bigoted comments that would immediately and unequivocally violate Facebook or Twitter’s terms of service. For example, below is a screenshot from user “Sargon of Akkad” advertising his Gab page on Facebook. See also, “Paul Joseph Watson” advertising on Twitter his profile on Minds.com, another fringe site. 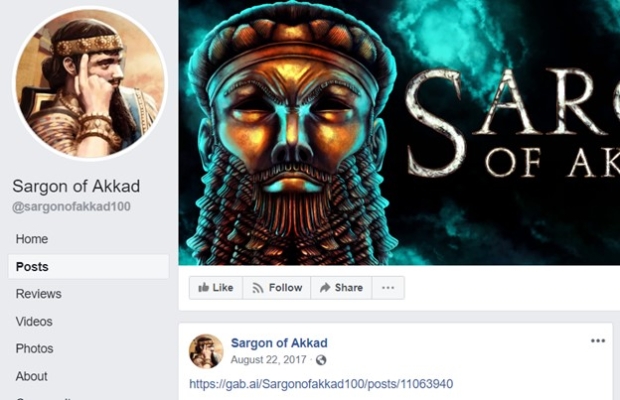 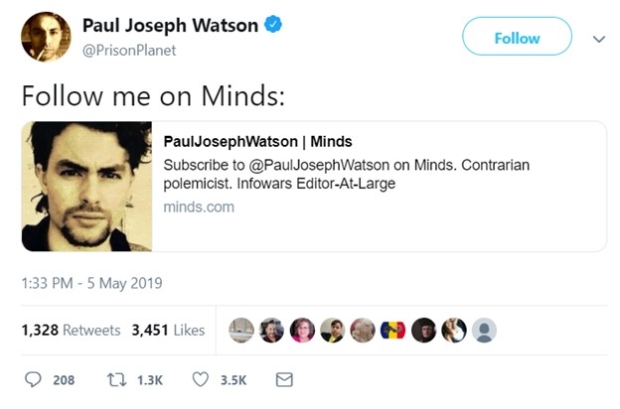 Recommendations: In certain instances, these pages are actually recommended by Facebook. Conducting neutral searches like “What is Gab?” or simply putting in the term “8chan” (which many people might search in order to get more information after reading a news article on the topic), can trigger recommendations to fringe-pages from mainstream platforms. The image below illustrates the above problem where Facebook is recommending the Gab page on Facebook as well as the QAnon/8chan page. QAnon is a far-right conspiracy theory that accuses President Donald Trump’s foes of being involved in a Satanic pedophilia and cannibalism ring. These recommendations are exactly what fringe platforms hope will result from their maintaining a less aggressive but constant presence on mainstream social media platforms. 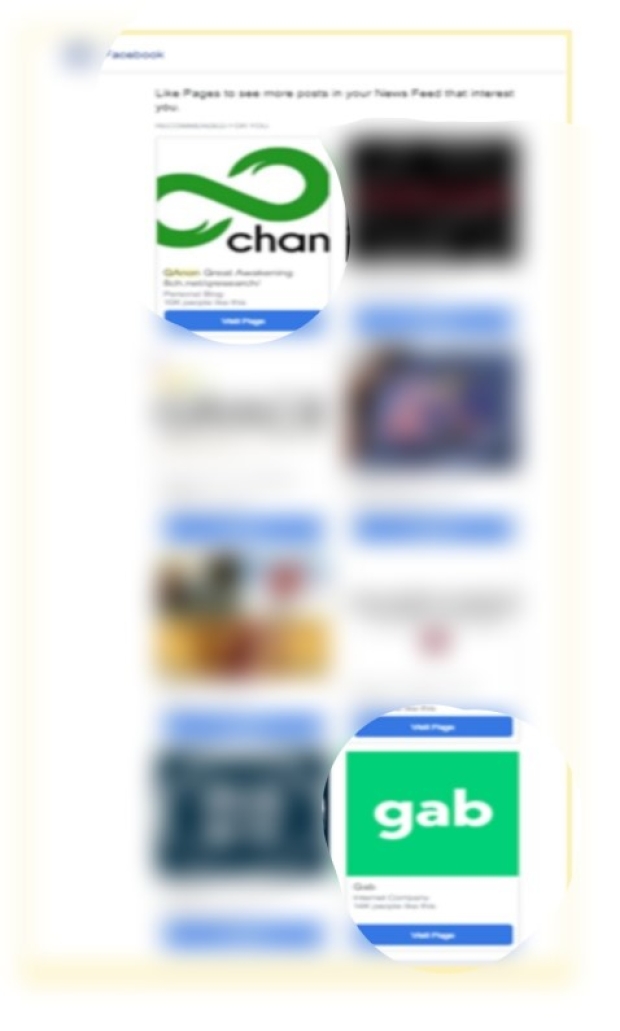 Company Accounts: Many of the above-mentioned fringe web sites maintain popular pages on mainstream platforms. For example, Gab has 165,000 followers on its Twitter page, while 8chan has 55,000 followers on its Twitter page. These pages provide links to their respective websites and regularly discuss features or content. Their presence on mainstream sites serves an important advertising role in furthering their mission and galvanizing their base. For example, in the Gab tweet pictured below, the official Gab Twitter account is associating its struggle with the struggle of other hateful individuals and groups like Alex Jones and Crowder, while classifying hate speech and harmful conspiracies as “speaking a little freely” or “mean words”. This Tweet not only attempts to galvanize support for Crowder, but serves a two-way function by attracting Alex Jones and Crowder followers to Gab. And in the case of private pages, events, and accounts, they can more openly flout community standard guidelines without having to fear the wrath of content moderators.

To address this, Facebook and Twitter should limit the ways they are spreading hateful messages from smaller platforms. Fringe platforms like Gab and 8chan openly cater to users interested in spreading hate and conspiracies, and a considerable amount of their content would violate mainstream platforms’ terms of service. As a result, mainstream platforms must aim to decrease cross-users’ ability to recruit and spread hate, and should increase the friction for users between their platforms and fringe platforms. The former Chief Security Officer of Facebook refers to this as building a “moat.” One way this can be done is for mainstream platforms to prohibit sharing links to fringe platforms that have significant amounts of content that would violate their own community guidelines. Deciding which of these fringe sites should not be recommended or linked to will be a line-drawing exercise, and Twitter and Facebook will inevitably miss some fringe sites or prohibit links to websites that don’t warrant friction. In this way, dealing with fringe platforms is no different than dealing with hateful tweets or hateful accounts. Perfect is impossible and line-drawing is inevitable, but this should not be an excuse for inaction. Facebook and Twitter must take care of some of the big, obvious examples of hate-filled fringe websites to help de-amplify the worst actors and the darkest spaces of the internet currently getting free, significant publicity.