Thirty years ago, the Gulf state of Kuwait was liberated from Iraqi forces by an American-led military coalition. Its society is exceptionally pluralistic, with large Sunni, Shi’ite and expatriate communities, and it has the most participatory system of government in the Arabian Peninsula.

Kuwait’s new ruler Amir Nawaf Al Sabah took office in September 2020, and during his biggest speech this year he called on the Kuwaiti nation to practice “adherence to the teachings of our tolerant religion, which urges us to unify ranks and spread kindness and compassion.”

However, according to the Kuwaiti government’s official list of textbooks in use for the new 2021-22 academic year, its Ministry of Education is continuing to reuse state-published textbooks from past years that teach horrific antisemitism.  In addition, some lessons include ideas that are intolerant or confrontational toward Ahmadi Muslims, Baha’is, and Christians.

As Kuwait’s new ruler starts to chart his country’s course, peace and tolerance education should be one of his considerations. And the United States, which still plays a major role ensuring the State of Kuwait’s national security, should convey that hateful indoctrination of this sort is simply unacceptable.

ADL found particularly disturbing examples of antisemitic materials in Kuwait’s second-semester textbook in use for eighth-grade public school courses on Islamic Education.  Even among the textbook’s stated learning objectives, it declares one objective is for students to learn that “the enmity of the Jews toward Islam and the Muslims is old and deeply rooted” and that “stirring up strife, breaking pacts, and malice are among the inherent characteristics of the Jews.”

Those exact phrases are then repeated at the end of one of the book’s subsequent chapters.

Excerpt from a Kuwaiti textbook. “With my brothers, I learned from the lesson that: 1. The enmity of the Jews toward Islam and the Muslims is old and deeply rooted.  2. Stirring up strife, breaking pacts, and malice are among the inherent characteristics of the Jews.”

That chapter of this textbook begins on a similar note as well, advising students that “the attribute of treachery is deeply rooted in the Jews,” from ancient times to the modern era.

Starting in ancient times, it then places collective blame on all Jews during the time of the Prophet Muhammad, teaching that “the plots of the Jews” as a whole included “violating pacts,” “conspiring to kill the Prophet,” “sowing doubt toward the principles of Islam,” “inciting strife” among rival tribes, and even “exposing… Muslim women.” As for the present era, the book teaches that such “enmity of the Jews toward the Muslims” continues today through such means as “controlling societies,” “controlling the global economy,” “setting up Masonic lodges to destroy religious precepts,” and “loading up the world with hostility toward Muslims” through “using media apparatuses” to spread “distortions” and “rumors.”

As the textbook moves into teaching about the modern era, it also baselessly scapegoats Jews by accusing them of perpetrating “the incident of burning the al-Aqsa Mosque in 1969,” a notorious arson attack that was actually perpetrated by a Christian fundamentalist from Australia with mental illness named Denis Michael Rohan.  And it advocates a range of actions to “challenge the conspiracies of the Jews,” including “boycotting their products.”  That line presumably is a reference to the Arab Economic Boycott or the global Boycott, Divestment, and Sanctions (BDS) Movement targeting Israel, and yet it unabashedly references “the Jews,” not “Israelis” or even “Zionists.”

Looking prospectively toward the future, this textbook also repeatedly invokes a controversial prophecy that the world hereafter will not come until “the victory of the Muslims over the Jews,” when “the Muslims fight the Jews and kill them,” including those hiding behind rocks and trees.  Lastly, the textbook calls for confronting the Jews by “Muslims shouldering the obligation to liberate their lands and holy sites, and to cleanse them from the enemies of God.”

Other severely hateful messages are taught in another government-published textbook, intended for twelfth-grade students in the Kuwaiti education system’s specialized religious studies track.  That textbook, titled Islamic Issues and still in use this academic year, teaches outrageous antisemitism as well as derogatory messages toward Ahmadi Muslims, Baha’is, and Christians.

For instance, this textbook teaches the infamous antisemitic forgery The Protocols of the Elders of Zion as genuine fact.  It proclaims that “anyone who follows the origins of Freemasonry and its true goals finds that it only existed to fight Islam and eliminate it due to its [i.e. Freemasonry’s] association with Judaism and Zionism, since this goal was drawn up in The Protocols of the Elders of Zion” and has achieved such goals as toppling the Ottoman Empire, “obstructing the civilizational progress of Islamic societies,” and “spreading atheism and pornography.”

The textbook teaches that Jews around the world failed to fit in and thus resorted to amoral “conspiracies, machinations, and tricks,” including secret societies.  It elaborates that “the indisputable fact is that Freemasonry was founded by the Jews, starting from Talmudic Torah teachings” and symbols such as the number six to gather power and build their “alleged” temple.

“The figure of the number six as a model for Masonic emblems,” graphic from a twelfth-grade Islamic Issues textbook for Kuwait’s religious studies education track, page 163.

According to the textbook, the highest level of Freemasonry includes “the chief rabbis of the Jews” who “set the plots for all the Jews of the world and controls the world’s plots and major events.”  It says that ultimately these Masonic Jews seek to “crown the king of the Jews in Jerusalem” to rule and subjugate the world’s peoples through “irreligious, globalist republics,” “controlling international institutions,” “controlling the media,” “using women as a means of control,” and even “sterilizing and controlling birthrates among Muslims.”

Another particularly objectionable lesson from the book pertains to what it calls the two types of Western scholars studying the Islamic world.  For its villain, it chooses a Jew: the late British-American scholar Bernard Lewis, and it teaches that he conspired “to divide the Islamic world in what is known as ‘the Bernard Lewis Plan’,” which Foreign Affairs has derided as patently false.

In contrast, the textbook presents as its role model for a Western academic Roger Garaudy, an infamous Holocaust denier.  It says that he “was known for his resistance to Zionism” and “published around 70 books, including The Founding Myths of Zionism, a book in which he defended the ‘Zionist Conspiracy’ theory, which believes that it [Zionism] fabricated what is known as the Jewish massacre ‘The Holocaust’ at the hands of the Nazis.” 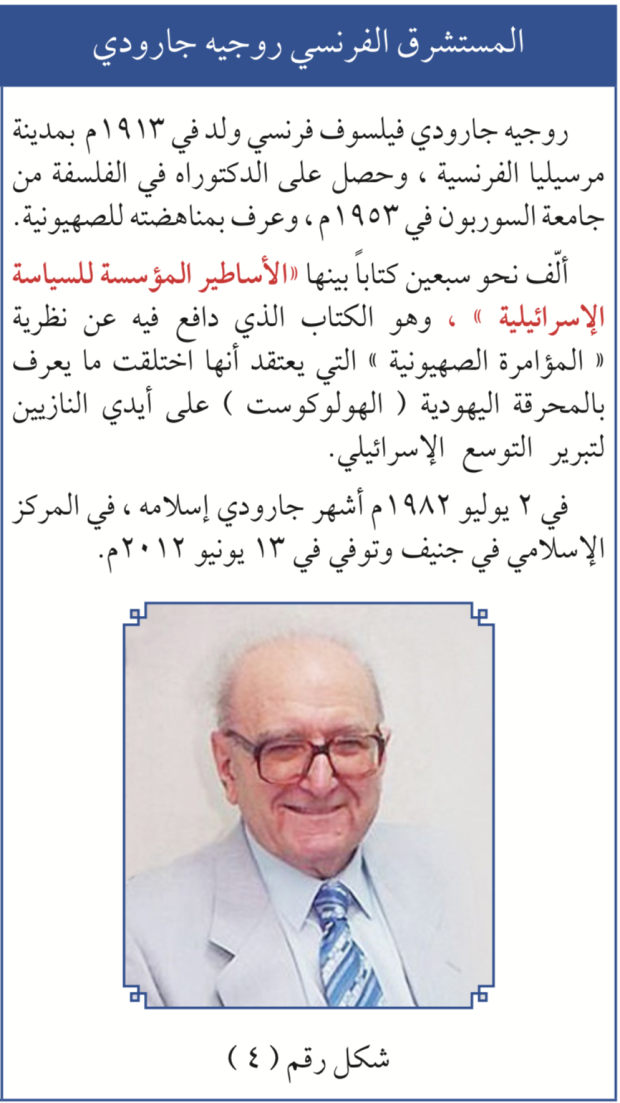 The same twelfth-grade Islamic Issues textbook for Kuwait’s religious studies track also teaches objectionable passages about adherents of several other faiths, particularly Ahmadis, Baha’is, and Christians. Some of the passages teach confrontation, some are derogatory, and some are simply incorrect.

For example, the textbook teaches that Christianity began as “pure monotheism” but then Paul the Apostle, “a Jew by origin… perverted Christianity.” In addition, it teaches that any Muslim who converts to Christianity “has converted from worshipping the one and only God to polytheist worship and deviancy, represented by the doctrine of the Trinity.” And in the interim, it suggests that Christianity has been waging an “intellectual invasion” for over 700 years, with the aim of subverting Islamic societies with such varied means as proselytization and socialism.

Regarding Ahmadi Muslims, it rejects that their choice to identify as Muslims and incorrectly alleges that their faith endorses consuming alcohol, pork, and illicit drugs.  In a section on the alleged influence of Ahmadis, it claims that “the English government embraces this faith… taking officers from them for its secret intelligence service” and includes a photo of an Ahmadi man hugging a Jew. 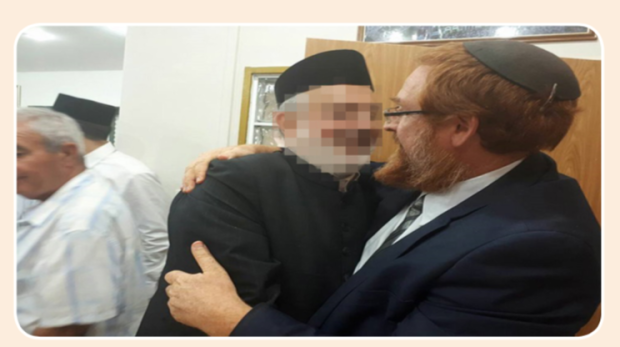 Image from a lesson on Ahmadi Muslims and “The Spread and Areas of [their] Influence”.

As for Baha’is, the textbook teaches that they have an inherent “relationship with imperialism” and makes a point of teaching, apropos of nothing, that the funeral of its founder’s son was attended by “the Anglo-Zionist ruler of Jerusalem and a number of Jews.”

Finally, with regard to how to treat the adherents of Ahmadi Islam and Baha’ism, the textbook advocates “confrontation” and intolerance. It prescribes that Muslims “resist” Ahmadism, “not interact with it, and not bury their dead in Muslim cemeteries.” And it points to a fatwa from Egypt’s al-Azhar seminary that “forbids” Baha’ism, “warns against its danger, and necessity of combating it.”

Shortly after 9/11, Kuwait’s Ministry of Education reportedly announced that it would be reforming its government-published textbooks in order to teach “brotherhood, equality, love, caring, mercifulness, and coexistence.”  Clearly, that has not been achieved consistently to date.

To be fair, the twelfth-grade Islamic Issues textbook examined for this study included content that was mostly neutral or in some cases even positive.

For example, it has a decent section on the history of the Arab-Israeli peace process, including a photograph of the historic handshake between Yasser Arafat and Yitzhak Rabin.  It mentions international human rights charters such as the Universal Declaration of Human Rights and gives lip service to the principle of religious freedom.  And it even teaches students that “people are equal in dignity and enjoy equal right to protection under the law without discrimination.” 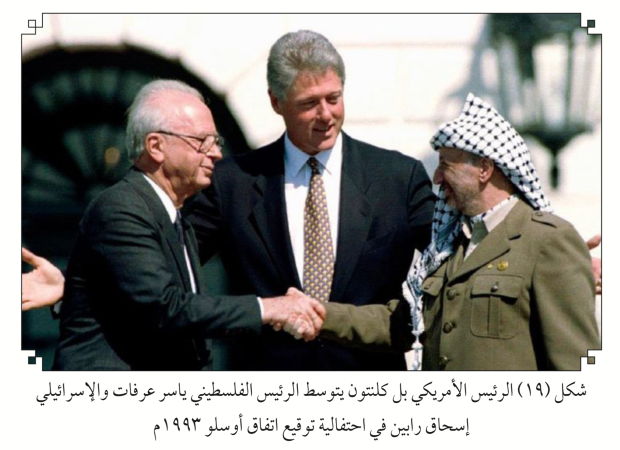 Graphic from a Kuwaiti textbook.  “Figure 19: The American President Bill Clinton Mediating the Palestinian President Yasser Arafat and the Israeli Yitzhak Rabin in the 1993 Oslo Accord signing celebration.”

However, the positive value of such passages is undoubtedly undermined by the extensive intolerance taught to students in the pages that preceded it – not to mention other textbooks in the curriculum, such as the eighth-grade Islamic Education textbook reviewed for this article.

Kuwait’s failure to implement successful peace and tolerance education reform over the past two decades should be a cautionary tale for American officials as well as Kuwait’s new ruler.  Tolerant principles and goals are wonderful to express, but their implementation cannot succeed if Kuwait’s Ministry of Education continues to publish textbooks that teach kids antisemitism.