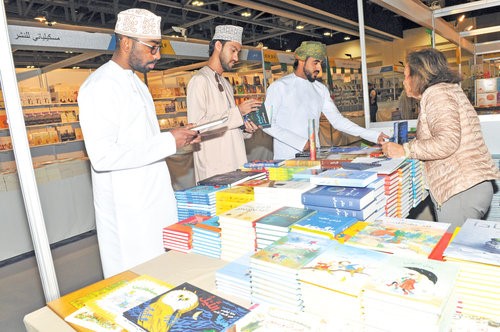 New York, NY, February 26, 2019 … The ADL (Anti-Defamation League) today called on the Sultanate of Oman to remove a number of virulently anti-Semitic titles that are being promoted for sale in the Arabic language through Oman’s annual state-run book fair.

According to ADL’s Arabic language experts, a number of blatantly anti-Semitic titles are currently listed on the web site for the 2019 Muscat International Book Fair. The listings include more than a dozen versions of the infamous anti-Semitic forgery, “The Protocols of the Elders of Zion,” as well as a dozen copies of Adolf Hitler’s “Mein Kampf.” Also available is Henry Ford’s “The International Jew,” another seminal anti-Semitic tract. The government-organized book fair, which runs through March 2, has provided a platform for anti-Semitic texts in past years as well.

“At a time when anti-Semitism is surging in the Middle East and around the world, it is deeply troubling that Oman’s government-sanctioned book fair is providing a platform for some of the worst conspiratorial anti-Semitic titles of the 20th century,” said Jonathan Greenblatt, ADL CEO and National Director. “The Sultanate of Oman needs to ensure that such intolerant books are swiftly removed and that this event does not provide a platform to those who would promote anti-Semitism in future years.”

ADL has written to Hunaina Al-Mughairy, Oman’s Ambassador to the United States, listing many of the anti-Semitic titles found on the book fair’s official web site and calling on the government to take action to ensure that they are removed from circulation.

ADL’s letter noted that the book fair is also promoting various other blatantly anti-Semitic titles, such as “The Heads of Evil: Ten Engineers of the Zionist American Plot to Fracture our Arab World and Ignite Revolutions,” as well as some books that are deeply intolerant to adherents of other religions, including Shi’ite Islam and the Yazidi and Baha’i faiths.

Similarly, in December 2018, ADL wrote to the American Embassy in Qatar regarding concerns about anti-Semitic titles at the Doha International Book Fair. The U.S. Chief of Mission and Chargé d'Affaires William Grant and his team then took immediate action, raising concern about these books with the Qatari Ministry of Culture, visiting booths at the book fair to identify the anti-Semitic materials flagged by ADL and consulting with other embassies that were participating in the event. The Qatari government subsequently withdrew certain anti-Semitic titles from the book fair and issued a circular to participants indicating that intolerant books were not permitted. ADL urges the U.S. government to call on foreign governments to ensure that government-run book fairs do not provide a platform for hate, especially in those cases when U.S. officials may be invited to participate.