Since September 1, 2016, ADL’s Center on Extremism has recorded 346 incidents where white supremacists have used fliers, stickers, banners, and posters to spread their message. These incidents targeted 216 college campuses -- from Ivy League schools to local community colleges -- in 44 states and Washington, D.C. 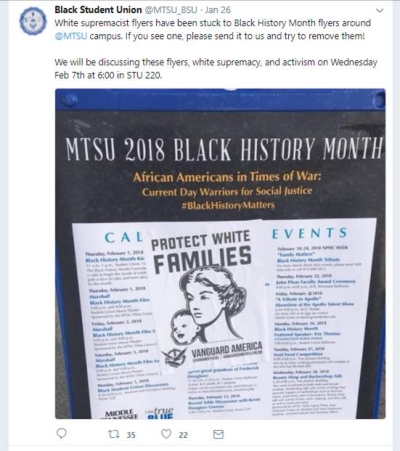 “White supremacists are targeting college campuses like never before,” ADL CEO Jonathan Greenblatt said. “They see campuses as a fertile recruiting ground, as evident by the unprecedented volume of propagandist activity designed to recruit young people to support their vile ideology.”

Among the most active groups is Identity Evropa (IE), a white supremacist group focused on the preservation of “white American culture” and promoting white European identity. The group, which ADL tracks on an ongoing basis, was responsible for 158 of the 346 incidents, or almost half the total at 46 percent. (ADL background on the group is available at https://www.adl.org/education/resources/profiles/identity-evropa.)

In just the last week, white supremacist groups Patriot Front and Vanguard America have plastered college campuses with fliers, demonstrating the trend shows no signs of stopping. The latter vandalized a Black History Month poster at Middle Tennessee University with its own propaganda.

Texas and California have been hardest hit by the incidents, with 61 and 43, respectively, since Sept. 2016. Those states are home to the most concentrated and active membership for IE and Patriot Front, the groups that most frequently employ this tactic. 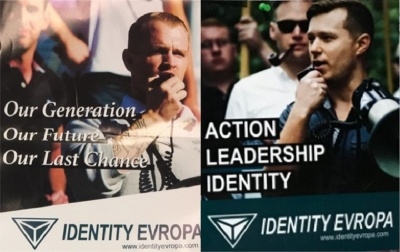 White supremacist campus activism doesn’t end with paper propaganda. Prominent racist Richard Spencer has held a number of public speaking engagements on college campuses over the last year and a half. Spencer spoke at Texas A&M University in December 2016, Auburn University in April 2017, and the University of Florida in October 2017. He is scheduled to speak at Michigan State University in March and is attempting to hold an event at Kent State University on May 4, the 48th anniversary of the murder of four students by National Guardsmen.

“While campuses must respect and protect free speech, administrators must also address the need to counter hate groups’ messages and show these bigoted beliefs belong in the darkest shadows, not in our bright halls of learning,” Greenblatt said. “There is a moral obligation to respond clearly and forcefully to constitutionally protected hate speech.”

In testimony to Congress last July during a hearing on “Challenges to Freedom of Speech on College Campuses,” ADL provided policy recommendations to address hate speech on campus. These included educating faculty and students on the parameters of their First Amendment speech rights, and improving training for campus officials on responding to bias incidents and hate crimes.