New York, NY, January 27, 2021 … ADL (the Anti-Defamation League) today issued a report card grading each of the 10 major digital social platforms for their efforts to effectively address Holocaust denial content on their platforms.

The assessment, released as the world commemorates International Holocaust Remembrance Day, found that Twitch is the most responsive platform and has the most robust policies in place for addressing Holocaust denial, a form of antisemitism. Following not far behind were Twitter, YouTube, Roblox and TikTok, who each earned “Cs” for their efforts; while Facebook, Instagram, Discord, Reddit and Steam were issued near “failing” grades.

“In recent years, content denying the Holocaust has appeared on an array of social media platforms, largely because those companies have not been nimble enough or taken the issue seriously,” said Jonathan A. Greenblatt, ADL CEO. “While some platforms have finally stepped up their efforts to stop the amplification of denial, others are still struggling to address antisemitism and Holocaust denial effectively. This is truly shameful at a time when antisemitic conspiracy theories are spreading globally, some outrageously based on the big lie that the Holocaust never happened."

Here’s the ADL report card and the ranking of those platforms we evaluated: 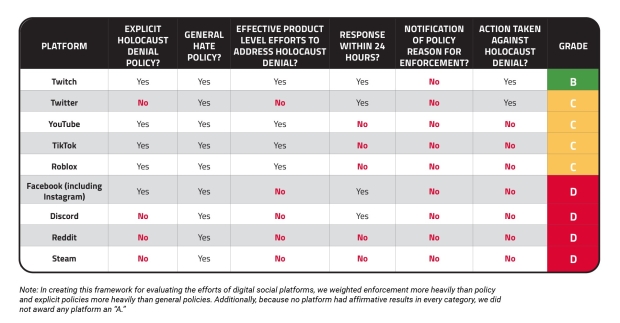 The report card was based on a thorough investigation of 10 social platforms’ responsiveness to the issue, and graded each based on a series of criteria including: how comprehensive the platform’s policies are in addressing Holocaust denial, how such content appears, and how responsive each was in dealing with the content once it was flagged by anonymous users.

Twitter and Twitch were the only platforms in the study who took immediate action when Holocaust denial content was reported to them by anonymous users. Other platforms included in the study either maintained that the content did not violate their policies or provided no response at all.

Despite being one of history’s most painstakingly examined and well-documented genocides, the hateful denial of the Holocaust has been a longstanding problem on social media. Social media platforms have taken, at best, an uneven approach in dealing with the issue. Holocaust denial is founded on stereotypes of Jewish greed, malevolence, and scheming, and on the belief that Jews are somehow able to force massive institutions — governments, Hollywood, the media, academia — to promote an epic lie.

In October, after nearly a decade of advocacy work by ADL, Facebook announced that it was changing how its platforms treated Holocaust denial content by recategorizing it as hate speech instead of misinformation. But despite that change, the platform still fails to respond to reports when such hateful content is flagged. This earned the platform a “D,” under the ADL’s weighted rating scale. Facebook was the only platform in our investigation that confirmed after their own internal review process that the majority of the content we reported did not violate their community standards.

Other platforms have done more extensive work removing Holocaust denial content and redirecting users to credible information about the Holocaust or putting safeguards in place to prevent people from seeing or amplifying such content.

A September 2020 survey issued by the Claims Conference found that nearly half of American adults under 40 years old had been exposed to Holocaust denial or distortion on social media.