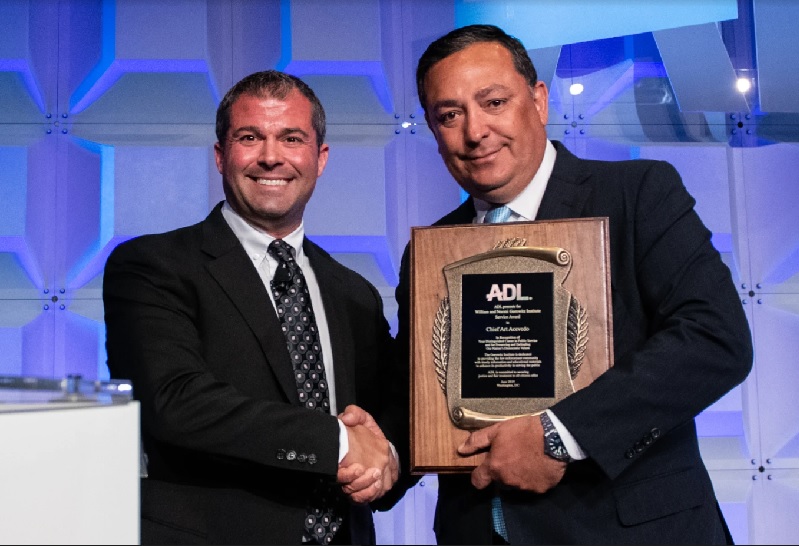 Washington, D.C., June 3, 2019 … ADL (the Anti-Defamation League) today honored Houston, Texas Police Chief Art Acevedo with the ADL William and Naomi Gorowitz Institute Service Award in recognition of his remarkable career of public service and for being a champion of community policing.

The award was presented by Adam Gerry, President of Granite Associates, Inc., grandson of William and Naomi Gorowitz and son of Alan Gerry who created the Institute and Award in memory of his late parents.

“Chief Acevedo is recognized as one of the most important and influential law enforcement leaders in the country,” Gerry said. “His leadership on the local and national level comes at a time when building trust between police and the people they serve has emerged as a priority for both the public and for law enforcement. Chief Acevedo’s community engagement grows out of not just his experience as a law enforcement professional, but from his own story of having come to our country as an immigrant.”

Born in Cuba, Chief Acevedo emigrated with his family to the United States when he was four-years-old. He is the first Hispanic person to lead the Houston Police Department. He began his career in 1986 in the California Highway Patrol and rose through the ranks to eventually become the department’s chief. Prior to his current role, Acevedo served nine years as the Chief of the Austin Police Department. Chief Acevedo leads a department of 5,200 sworn law enforcement officers and 1,200 civilian support personnel with an annual general fund budget of $825 million in the fourth largest city in the United States.