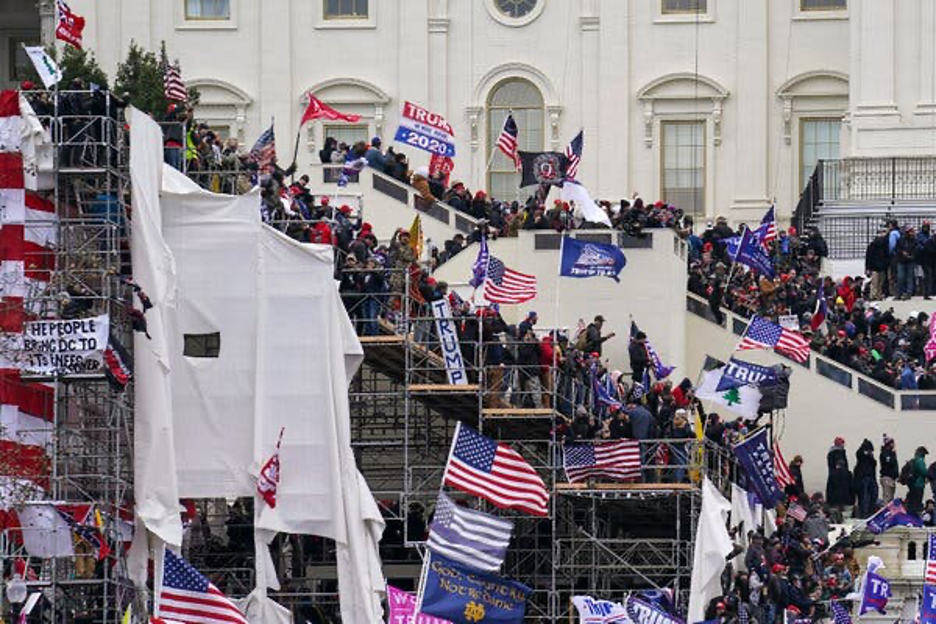 Civil Lawsuit is the First Filed by a Government Entity Against Proud Boys and Oath Keepers; Seeks Damages Caused by Violent & Deadly Attack

The lawsuit specifically claims the groups, and their leaders and members, caused extensive damage to the District of Columbia, and particularly to the law enforcement officers who risked their lives to defend the Capitol, those in it, the District, and our democracy.

The civil lawsuit is the first by a government entity against the January 6 insurrectionists. The lawsuit seeks to hold the Proud Boys, Oath Keepers, and their leaders and members accountable for their actions in planning and carrying out the January 6 attack and violating federal and District laws. It seeks to recover damages they caused to the District, particularly the physical, mental, and emotional injuries suffered by Metropolitan Police Department officers.

“ADL has been at the forefront of strategically monitoring, exposing, and countering extremist threats from across the ideological spectrum for decades,” said Jonathan A. Greenblatt, ADL CEO and National Director. “We have deep expertise when it comes to the groups and individuals involved in the planning and execution of the January 6th attack and are honored now to be putting that expertise at the service of the District of Columbia and the brave officers who were injured or killed as a result of that day. Those who perpetrated the attack will not readily abandon their convictions. Domestic extremists, like the Proud Boys, Oath Keepers, and others, continue to present a serious, credible, and dangerous threat to our democracy and to us all. Accountability for January 6th is critically important to preventing another violent insurrection from happening in D.C. or in state capitols across the country.”

Filed in the U.S. District Court for the District of Columbia, the lawsuit alleges that the Proud Boys, Oath Keepers, and more than 30 of the individual members and affiliates of these groups participated in a coordinated violent attack on January 6th.

In the complaint, the Office of the Attorney General (OAG) details how the groups planned, recruited, publicized, funded, and then carried out the attack – breaking through police barricades, forcing their way into the Capitol building, terrorizing members of Congress and their staffs, and brutally assaulting those who tried to stop them, including officers of the District’s MPD.

“States United is proud to stand with Attorney General Karl Racine and our partners in government, law enforcement, and the legal community to hold perpetrators of the violent January 6th insurrection accountable,” said Joanna Lydgate, CEO of the States United Democracy Center and former Chief Deputy Attorney General of Massachusetts. “This case comes at a time when we are seeing a major increase in political violence in this country. Election lies and conspiracy theories helped fuel the insurrection— and those same lies pose a serious threat to our democracy today. But in America, we’re a nation of laws. There are consequences for stepping outside the bounds of our democracy — for trying to overturn the will of the American people, for attacking the public safety officers responsible for protecting it — and that’s what this case is about.”

“On January 6, organized violent actors and groups assaulted our country's freedom and terrorized our community here in the District, threatening the safety of the more than 700,000 Americans—including children, families, teachers, and businesses —who call the District home,” said AG Racine. “Thankfully, the District's brave law enforcement officers, many of whom were grievously injured by the violent mob, put their lives on the line and repelled the shocking attack on our Capitol. We are filing this lawsuit to hold accountable the groups and individuals who conspired to attack our freedom, brutalize our law enforcement officers, and terrorize our community. This suit is seeking substantial financial damages to obtain restitution and recompense to victims, including law enforcement officers, many of whom continue to suffer physical and mental trauma and the District itself. By seeking justice through this civil lawsuit, we will hit the organizers, planners, and participants in their wallets and purses in order to deter and dismantle their ability to strike again.”

“I want to express my appreciation to D.C. Attorney General Karl Racine for filing this important lawsuit,” said D.C. Congresswoman Eleanor Holmes Norton. “While President Trump delayed sending the D.C. National Guard to the Capitol during the attack on January 6, the Metropolitan Police Department voluntarily responded, protecting the Capitol, Congress and democracy itself. I was able to secure a $9.1 million federal payment to the District in an emergency supplemental appropriations bill that was signed into law in July to compensate D.C. for the direct costs of responding to the attack. It is appropriate that the perpetrators of the attack compensate D.C. for the other costs D.C. incurred that day, including for medical treatment and paid leave, which are outside the scope of the funding I was able to secure for the District. From damage to police property to medical expenses related to the attack, the perpetrators, including the Proud Boys and Oath Keepers, must pay D.C. I strongly support and appreciate the filing of this lawsuit.”

“I applaud Attorney General Racine for filing this important lawsuit,” said Metropolitan Police Officer Michael Fanone. “The domestic terrorists who stormed the Capitol and violently assaulted hundreds of brave law enforcement officers were stoked by groups promoting The Big Lie. Those of us who suffered physical and emotional harm trying to defend democracy will never forget, nor will we cease working to hold accountable everyone responsible for inciting the mob, wherever the evidence may lead.”

“I strongly support the work of Attorney General Racine to hold the insurrectionists accountable for carrying out a coordinated attack on not only our nation’s capital, but on our home, on our first responders, and on our residents,” said Councilmember Charles Allen. “The impact of January 6 was felt nationwide, but few Americans experienced it as personally as District residents. The perpetrators intentionally created a situation that ultimately cost lives, endangered many more, and profoundly impacted our national consciousness.”

With ADL serving as outside co-counsel, OAG filed the suit under federal and local laws, including the Ku Klux Klan Act of 1871, a Reconstruction-era federal law designed to provide a remedy against violent conspiracies that target our democracy like the attack that unfolded on January 6. OAG’s lawsuit lays out and alleges that:

With the lawsuit, ADL is seeking to hold these groups and individuals accountable for their violent and unlawful acts, deter them and others from ever taking such action again, and recover damages for the costs the District incurred as a result of the attack. The damages include the millions of dollars spent to deploy an unprecedented number of police officers to the Capitol, emergency medical care, and ongoing medical and mental health care for the numerous officers who were injured in the attack and continue to face trauma.