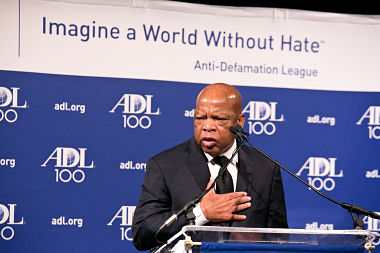 New York, New York, July 18, 2020 … ADL (the Anti-Defamation League) today mourns the loss of U.S. Rep. John Lewis, D-GA, an iconic leader who played a pivotal role in the events of the Civil Rights Era, from the Freedom Rides, to Bloody Sunday, to the March on Washington, where he delivered one of the keynote addresses at the age of 23 as the youngest speaker to take the stage. Congressman Lewis repeatedly and bravely risked his life to promote the philosophy of political nonviolence to help to achieve the dream of equality.

“We are devastated to learn of the passing of my hero, friend and civil rights icon, Rep. John Lewis,” said Jonathan Greenblatt, ADL CEO. “John devoted his life to the pursuit of justice and taught the world about the importance of making what he called ‘good trouble.’ Lewis was a fearless leader whose courage and heroism were on display each and every day as he fought for a more just world.”

“What he did not only for the African-American community, but for the entire country stands as an example of courage and of heroism. We were fortunate to have him in our ranks as a supporter and friend through the decades,” said Esta Epstein, Chair of the ADL Board of Directors.

In addition to his leadership in the House, Rep. Lewis was a close friend of ADL and a lifelong supporter of ADL’s mission to achieve justice and fair treatment to all. Rep. Lewis stood shoulder to shoulder with ADL leaders as they worked to advance federal hate crimes legislation in the House and Senate and toward the passage of hate crime laws in all 50 states. He was likewise a strong supporter of the Equality Act and the Voting Rights Advancement Act; and he worked with ADL in response to the white supremacist violence in Charlottesville, and proudly served as a member of the ADL Centennial Committee in 2013.

That same year, he was honored at ADL’s In Concert Against Hate at the Kennedy Center for a lifetime of public service and his courage in advancing the ideals of the civil rights movement in America.  He was presented with ADL’s Lifetime Achievement Award by ADL’s Southeast Region on March 16, and will be posthumously celebrated in an upcoming July 30 webinar.

“He not only is the moral compass for all we do – fighting the good fight – but as we look to fight hate every day, his tenacity, his ability to stick through things and to continuously show leadership, inspired us all,” said Allison Padilla-Goodman, Vice President, ADL Southern Division. “We will deeply miss his leadership and expresses our sincere condolences to his entire family.”