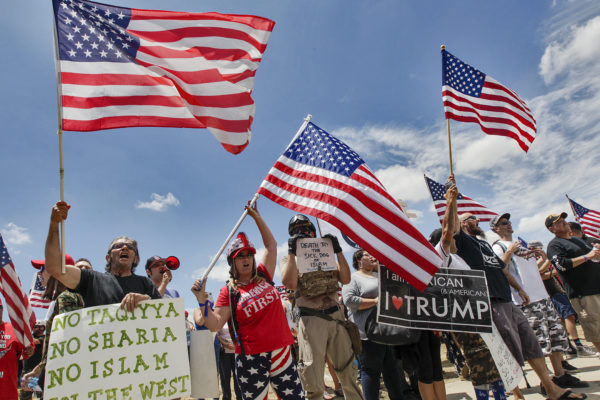 ACT for America is the largest anti-Muslim group in the United States today, and claims to have 750,000 members and hundreds of chapters nationwide. ACT purports to advocate for national security and against the threat of radical Islam, but in fact promotes conspiracy theories about all Muslims, including the 3.3 million Muslims living in the United States, the vast majority of whom are peaceful and law-abiding. Its founder, Brigitte Gabriel, has said that every practicing Muslim is a radical Muslim, and that any woman wearing a hijab must be an extremist.

Gabriel also claims that 25 percent of all Muslims support a radical form of Islam that justifies acts of suicide terrorism. In 2007 she told the Department of Defense’s Joint Forces Staff College that “a practicing Muslim who believes the word of the Koran to be the word of Allah … who goes to mosque and prays every Friday, who prays five times a day — this practicing Muslim, who believes in the teachings of the Koran, cannot be a loyal citizen of the United States.” She told the same group that any new mosque construction should be reported to the FBI, because it should be assumed that the mosque has links to terror organizations.

In recent years, ACT has circulated a document in Minnesota featuring Muslim elected officials and a warning about an imminent Muslim takeover, as well as a training manual that instructs ACT members to read books that demonize Islam. In 2012, ACT issued a report titled “Education or Indoctrination? The Treatment of Islam in 6th through 12th grade American Textbooks,” that called out textbooks they felt did not “accurately” describe Islam or the religion’s role in history. ACT members were urged to take the fight to their local school boards.

ACT for America was launched in 2007 by Brigitte Gabriel, who immigrated to the United States in 1989. Gabriel grew up a Christian in Lebanon in the 1970s and 1980s, and refers to herself as “a survivor of Islamic terror.”

Gabriel’s personal story strongly informs ACT’s mission and agenda. While she claims to be focused on combating the threat of radical Islam, Gabriel also makes it clear she believes every practicing Muslim is a radical Muslim. “In the Muslim World,” she has said, “extreme is mainstream.”

Gabriel considers herself a “9/11 national security conservative.” Gabriel has said that, after the 2001 terrorist attacks against the World Trade Center and the Pentagon, she felt that the United States was on the precipice of Islamic radicalization based on what she had experienced growing up in the Middle East. In the subsequent years she has repeatedly stated that “Islamofascism is the issue of our time.”

Despite the glaring evidence of their own efforts to spread anti-Muslim rhetoric, Gabriel and her fellow extremists don’t think Islamophobia exists – they believe the term was invented by Muslims in order to “vilify anybody who is going to talk about Islam or criticize Islam.”

Brigitte Gabriel has said that she and ACT are “fighting for the preservation of our Judeo-Christian culture where everybody can be free and do whatever they want to do as long as they respect the constitution and agree that everyone is equal under the law.” Gabriel has always sought, with limited success, to secure lobbying power on Capitol Hill; she organizes legislative briefings on immigration and national security, as well as meetings with members of Congress to advance her anti-Muslim agenda.

A number of elected officials have been featured and honored at Gabriel’s events, including Texas Sen. Ted Cruz, Rep. Steven King of Iowa, former National Security Advisor Michael Flynn, and New York Rep. Peter King, who was given ACT’s “Patriot” award in 2010. Gabriel was a guest at the White House in March 2017.

ACT’s legislative agenda traffics in paranoia that vilifies the American Muslim community. One of the group’s primary legislative goals is to restrict Muslims’ religious freedom by propagating the conspiracy theory that Muslim Americans are trying to impose Sharia Law in the United States. ACT demonstrates a weak understanding of Sharia law by attributing the brutal act of Female Genital Mutilation (FGM) to the set of religious laws. In fact, FGM is neither mentioned nor religiously sanctioned in the Quran or Sharia law, and it is already federally outlawed in the United States. As part of their efforts to denigrate an entire religion, ACT members falsely portray this disturbing cultural practice as a religious practice.

On a state level, ACT advocates for so-called American Laws for American Courts (ALAC), which seek to protect against (nonexistent) foreign threats to U.S. laws. Even if such threats did exist, there is already a law prohibiting the use of foreign laws as a means to interpret the Constitution.

On June 10, 2017, ACT organized a “March Against Sharia” in 28 cities across the United States, which the group promoted as “the real women’s march,” to protect women and children from the imaginary threat of Sharia law.

The Facebook event pages for the marches were filled with anti-Muslim rhetoric, and the events themselves provided a platform for other forms of bigotry, particularly anti-Semitism, which was on full display at two marches in California.

The marches also attracted dozens of members of right-wing extremist groups, including the white supremacists of Identity Evropa, led in Roseville, California, by group founder Nathan Damigo, and Vanguard America. A spokesperson for Vanguard America, who attended the march in New York City, told the Washington Post that he doesn’t “believe in having Muslims in the United States,” and that “their culture is incompatible with ours.” White supremacists, who are anti-Muslim and anti-immigration in addition to being dedicated to preserving “white culture,” found much to like about ACT’s mission.

Anti-government extremists, including Oath Keepers and Three Percenters, also showed up, armed with rifles and riot gear, as did "alt-lite" stalwarts the Proud Boys. The Oath Keepers claim that a member of ACT asked them to assist with security, to “help defend free speech.”