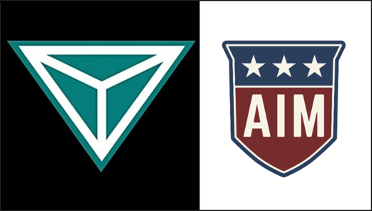 AIM was created in March 2019 as a rebranding of Identity Evropa, a white supremacist group that had been active from March 2016 through March 2019.

Under the AIM banner, the group moved away from Identity Evropa’s Europe-centric propaganda in favor of a message promoting the preservation of America’s “white culture” under the guise of patriotism. The group’s new propaganda included phrases such as “Defend America,” “Nationalism not Globalism,” “Protect American Workers,” “Diversity Destroys Nations” and “Embrace Your Identity.”

AIM’s rebranding was part of an effort to distance themselves from Identity Evropa’s negative reputation following its participation in the 2017 Unite the Right rally in Charlottesville.

But the group’s reputation took another blow when just days before the announcement, Unicorn Riot, a far-left non-profit media source, obtained and leaked more than 770,000 messages posted between September 2017 and February 2019 on Discord chat services associated with Identity Evropa. The content of the leaks provided clear evidence that Identity Evropa’s brand of white supremacy was rife with racism, anti-Semitism, and homophobia – very different from the image they have attempted to project. The leaked posts were rife with antisemitism and Holocaust denial, including the rampant use of the triple parentheses or (((echo))) and references to Jewish control of the media, Hollywood, internet censorship and the “feds.” Antisemitic codes such as “J woke” or “JQ” were also commonly used, as well as the number “#110” -- a numeric reference to the desire for the United States to be the 110th country to expel Jews. “JQ” refers to “the Jewish Question,” a longstanding antisemitic “debate” over the appropriate treatment of Jews, and a term used by white supremacists to signal their antisemitic bona fides.

AIM’s membership numbers suffered as the leaks led to dozens of IE members being doxed and revealed that the group’s membership included a wide range of working professionals, including a medical doctor in Tennessee, a CPA in Ohio, a Virginia police officer, a Brooklyn electrician, a New Orleans contractor, a law student at John Marshall Law School and several members of the U.S. armed forces.

• IE spreads its propaganda via the internet and by distributing fliers, posters, banners and stickers, especially on college campuses.

• IE’s slogan, “You will not replace us,” reflects its belief that unless immediate action is taken, the white race is doomed to extinction by an alleged ‘rising tide of color’ purportedly controlled and manipulated by Jews.

• IE has participated in protests against Muslims and immigration, and joined events organized by other white supremacist groups.

Identity Evropa (IE) is a white supremacist group that is focused on the preservation of “white American identity” and promoting white European culture. They promulgate the idea that America was founded by white people for white people and was not intended to be a multiracial or multicultural society.

The IE also brought a “You Will Not Replace Us” banner to the May 2017 alt-right rally in Charlottesville, Virginia. In August, IE members and other white supremacists chanted the slogan during the tiki torch march and the following day at Unite the Right.

IE distinguishes itself from other white supremacist groups by avoiding the most recognizable white supremacist imagery and language. The group’s logo is a blue or white dragon’s eye, an ancient European symbol that represents the choice between good and evil. For their posters and fliers, IE often uses black and white images of sculptures, including Michelangelo’s statue of David and Nicolas Coustou’s Julius Caesar. These classic European images are accompanied by variably subtle white supremacist messages: “Our destiny is ours,” “White people do something,” “Our future belongs to us,” “Only we can be us,” “Let’s become great again,” “Serve your people” and “Protect your heritage.”

Identity Evropa also uses fliers featuring Damigo and Evan Thomas, an IE member from Michigan, alongside phrases like “Our generation, our future, our last chance” and “Action. Leadership. Identity.”

Identity Evropa was founded by Nathan Damigo, an Iraq war veteran who is also a convicted felon. After an “Other Than Honorable” discharge from the U.S. Marine Corps in 2007, Damigo, of Oakdale, California, served five years in prison for robbing a man he believed was an Iraqi. While in prison, Damigo read former Klan leader David Duke’s book, My Awakening, which encouraged him to adopt white supremacist views.  He was released from prison in 2014 and enrolled at California State University, Stanislaus, where he briefly led the National Youth Front (NYF), the youth wing of the white supremacist American Freedom Party (AMF). After NYF disbanded, Damigo formed IE in March 2016.

In the wake of the August 2017 “Unite the Right” rally, Damigo abruptly resigned from IE, citing a need to focus on his personal life, and appointed Elliot Kline, also known as Eli Mosley, as the group’s new leader. Kline, a self-described Army veteran from Pennsylvania, joined IE in 2016 and served as the group’s director of events before taking the helm.

Kline led IE for just three months before resigning, citing irreconcilable differences. Almost immediately, he and Richard Spencer formed a new alt right organization called Operation Homeland. Kline, however, vanished from the white supremacist scene in February 2018, after a New York Times documentary revealed he had lied to his followers about being an Iraq war veteran.

In November 2017, IE’s Chief of Staff Patrick Casey (previously known by his alias Reinhard Wolff) replaced Kline as the group's leader. Casey, whose membership with Identity Evropa dates back to the first days of the organization, has also been the group’s spokesman and its director of administration. His activism has included recruitment efforts at his alma mater, San Diego State University. Casey works for Red Ice TV, a Sweden-based alt right political media company, where he writes articles and provides live commentary.

Under Casey’s leadership, IE has stepped away from collaborations with the broader white supremacist movement and its large events, focusing instead on invitation-only events like its first national conference. More than 50 IE members attended the gathering, held in Burns, Tennessee, in March 2018. Speakers included white supremacists Jared Taylor, James Allsup and Sam Dickson.

Prior to Casey’s leadership, Identity Evropa participated in events organized by other white supremacist groups. These events included white supremacist conferences and events focused on the preservation of Confederate monuments and “free speech.”

In June 2017, IE participated in anti-Muslim rallies organized by ACT for America in New York, Orlando, and Indianapolis.

IE also organizes small “flash mob” demonstrations. In March 2018, dozens of IE members showed up at the Parthenon in Nashville, Tennessee, with a large banner that read, “European Roots. American Greatness.”  Several members also appeared at a March pro-border wall rally in San Diego, California, with a “No DACA! No Amnesty!” banner.

Campus activism remains a priority in 2018; the group’s propaganda continues to surface on dozens of college campuses.

Since June 2017, Identity Evropa has increasingly used large, publicly-displayed banners to promote their group and ideology. Dozens of Identity Evropa banners have been hung from overpasses and bridges around the country. Most of the banners attributed to IE contain anti-immigration rhetoric and include language that aligns with mainstream far-right anti-immigration groups, with slogans like “Secure borders. Secure future,” “Defend American workers. End DACA now!” and “No more refugees. America First.” These phrases are a sanitized version of the group’s true aim, the preservation of “white American identity.”

In a related attempt to appeal to mainstream conservatives, IE has used banners to target those who believe liberals are waging a war against Christmas, and that the “politically correct” use of secular greetings such as “Happy Holidays” is an insult to Christianity. In December 2017, Identity Evropa ran a campaign featuring banners that read “Keep traditions alive. Merry Christmas.”