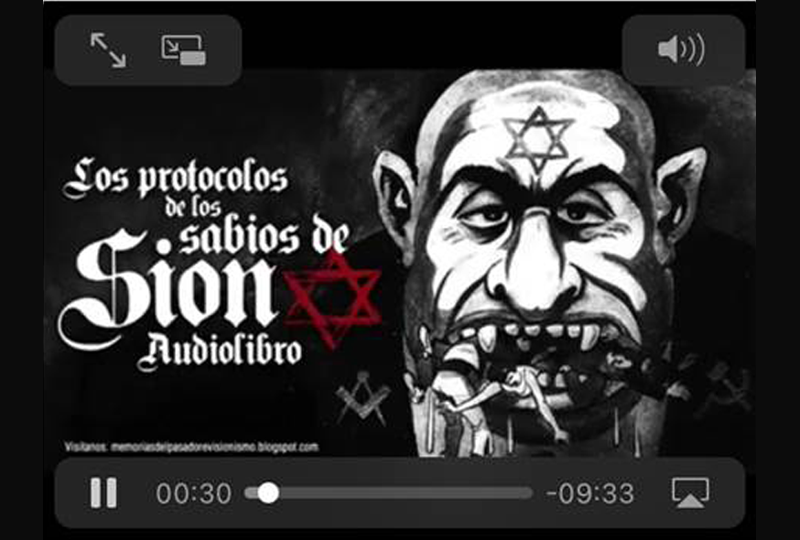 One of the many damning revelations from Facebook whistleblower Frances Haugen during her Congressional testimony on October 5 was that the platform devotes 87% of its research and resources on fighting misinformation to English-language content when only 9% of its users are English speakers. The lack of content moderation over hateful content in languages other than English has helped fuel global conflicts such as the civil war in Ethiopia.

And it appears Facebook’s efforts in Spanish are also problematic. ADL found antisemitic content that clearly violates the platform’s hate speech policy—in one example, an animated video about Holocaust denial that has been up for five years. In just a cursory review of Spanish language posts on the platform, we collected 25 Spanish-language antisemitic posts that were posted by groups with a total of 666,728 followers and viewed 55,911 times. These startling numbers indicate the damaging reach of even a modest number of posts.

Although there are nearly 500 million Spanish speakers all over the world, serious questions must be asked about whether Facebook and its parent company, Meta, devotes enough resources to content moderation in the language.

Research shows Spanish-language content moderation on Facebook is lagging. The human rights nonprofit Avaaz found that Facebook applied warning labels to 70% of misinformation about Covid-19 in English compared to only 30% in Spanish. Advocates have been pushing Facebook to provide transparency on the size and scope of its Spanish-language moderation teams to no avail.

The company's hate speech policy also forbids “designated dehumanizing comparisons, generalizations, or behavioral statements (in written or visual form) that include...Jewish people running the world or controlling major institutions such as media networks, the economy, or the government.”

ADL has been documenting Facebook’s inaction against antisemitic content through our Online Holocaust Denial Report Card and Online Antisemitism Report Card. In the former, Facebook earned a D despite its explicit ban on Holocaust denial content and it received a C- on the latter. The full extent of antisemitic Spanish-language content on the platform is unknown, but judging by the posts ADL easily found, it is yet another instance of the world’s largest communication platform failing to perform its due diligence in removing hate speech. 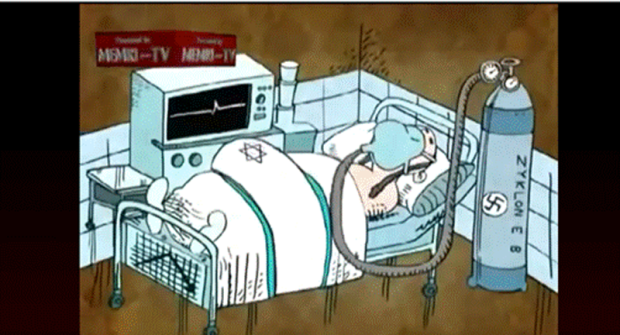 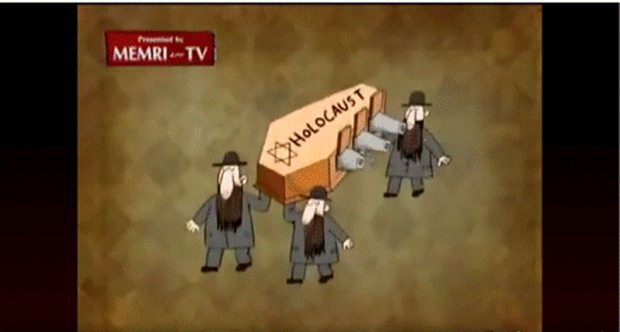 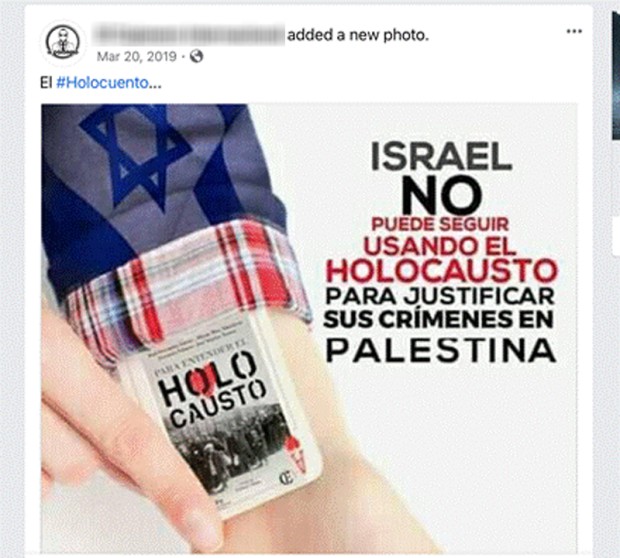 “Israel cannot continue to use the Holocaust to justify its crimes against Palestine.” Post from March 2019. 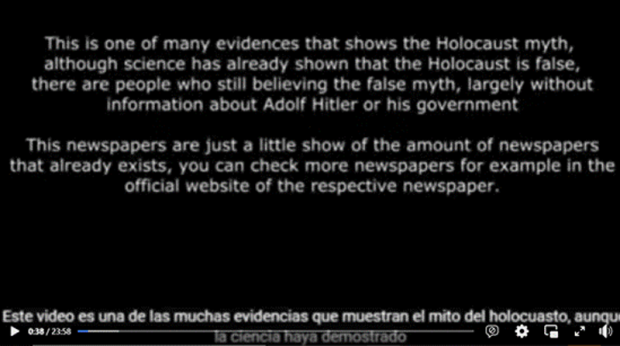 English video with Spanish subtitles posted on July 2020 purporting the Holocaust is a myth.

Later, in the same video, at 1:02: “In following newspapers different countries like Rusia [sic], Poland, Bulgari [sic], Rumania and Greece are accused of ‘Kill, persecute, to hound, humiliate, torture, starve and to massacre’ 6 million Jews in different contexts and different years. We understand now that the number 6 million, is a Kabbalist number, the Jewish/Zionist community was looking to accuse a country for killing 6 million jews [sic], thus carry out their plans, they tried for almost 100 years on several fronts like this newspapers without success, finally, with the defeat of Germany, they managed to accuse for this ‘propaganda plan’ called ‘Holocaust’ to Adolf Hitler and his government.”

Plan Andinia is a conspiracy theory claiming that Jews want to establish a second Jewish state, a Zionist one, in the Patagonia region, located in Argentina and Chile. This hoax is portrayed as a “secret plan,” and like many antisemitic conspiracy theories, is anchored in the tropes of Jewish people hoarding power, money, and influence. The modern version of the Plan contends that Israeli tourists are soldiers in disguise traveling to Patagonia on reconnaissance missions to stake out the land and draw maps for a future second State of Israel. South America is a popular destination for young Israeli backpackers after they complete their compulsory service in the Israeli Defense Forces. Their tourism reinforces the fictitious Plan. 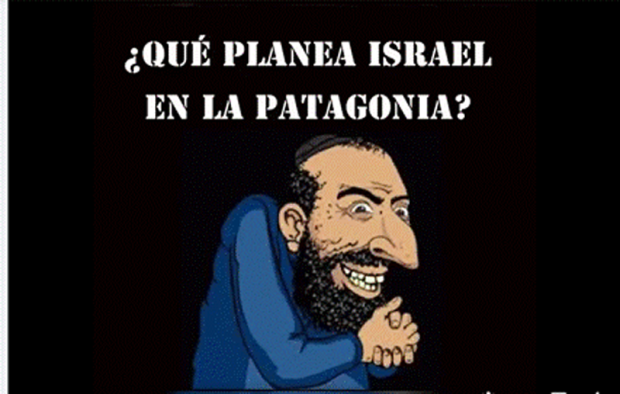 A 5-minute video posted on October 2021 uses an image of the Happy Merchant asking, “What is Israel Planning in Patagonia?” 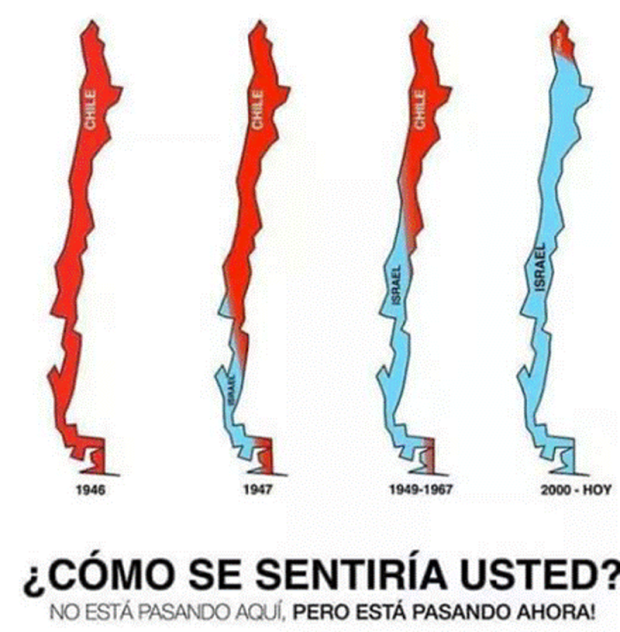 This post from December 2015 claims to show the fictional transformation of the map of Chile (red) since 1946 into one that is erased by the State of Israel in the present (blue). The caption states: “How would you feel? It's not happening here, but it's happening now!” 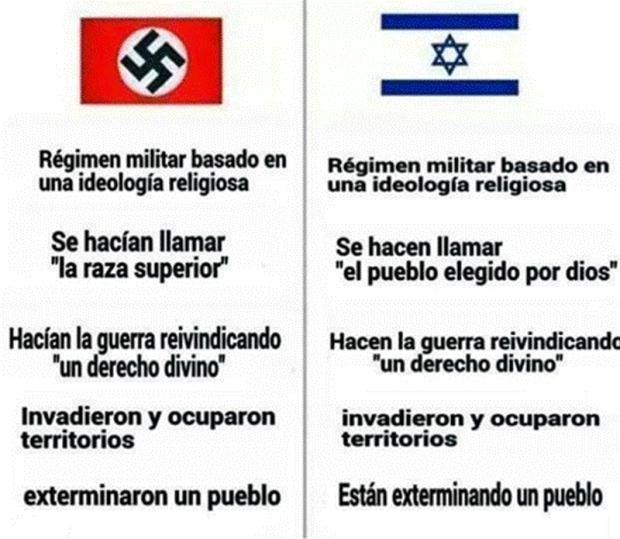 This Plan Andinia post from October 2014 compares the State of Israel to the Nazi regime. It claims that both are military regimes that: are based on religious ideologies, call themselves chosen people, are warmongers, invaded and occupied territories, and exterminated a people.

George Soros, the Rothschild Family, and Other Conspiracies

A persistent antisemitic myth is that Jews possess extraordinary power to harm or control people outside of the Jewish community. Jewish people are depicted as manipulating world governments, banking and financial institutions, and controlling the media and entertainment industries. A frequent target for this myth is the financier and philanthropist George Soros, who is of Hungarian Jewish heritage and a common bogeyman of the far right. Conspiracy theorists claim Mr. Soros funds Black Lives Matter, antifa, and migrant caravans to sow chaos.

Other oft-repeated hoaxes of Jewish people bidding for world domination include the Rothschilds and the Federal Reserve, the Zionist Occupied Government (ZOG), the Protocols of the Learned Elders of Zion, and Jewish control of Hollywood. 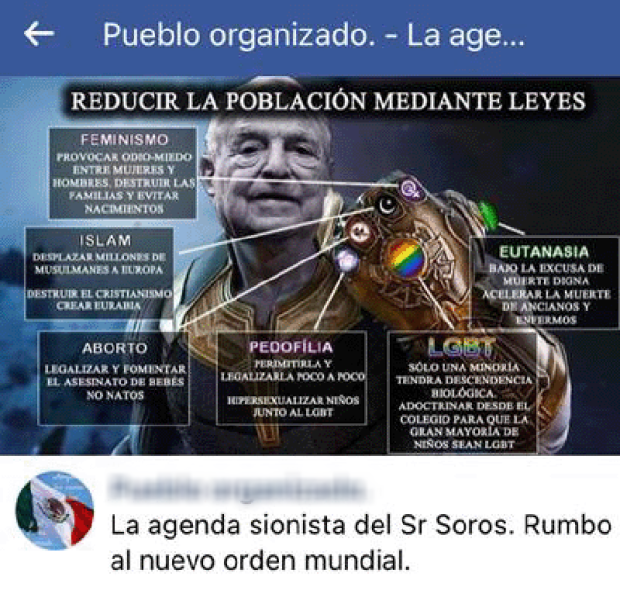 An October 2019 post on a page followed by more than 190,000 people states, “Soro’s Zionist agenda. On its way to a New World Order” portraying Soros as a combatant aiming to reduce population through laws in: Feminism, Islam, Abortion, Pedophilia, LGBT and Euthanasia.” 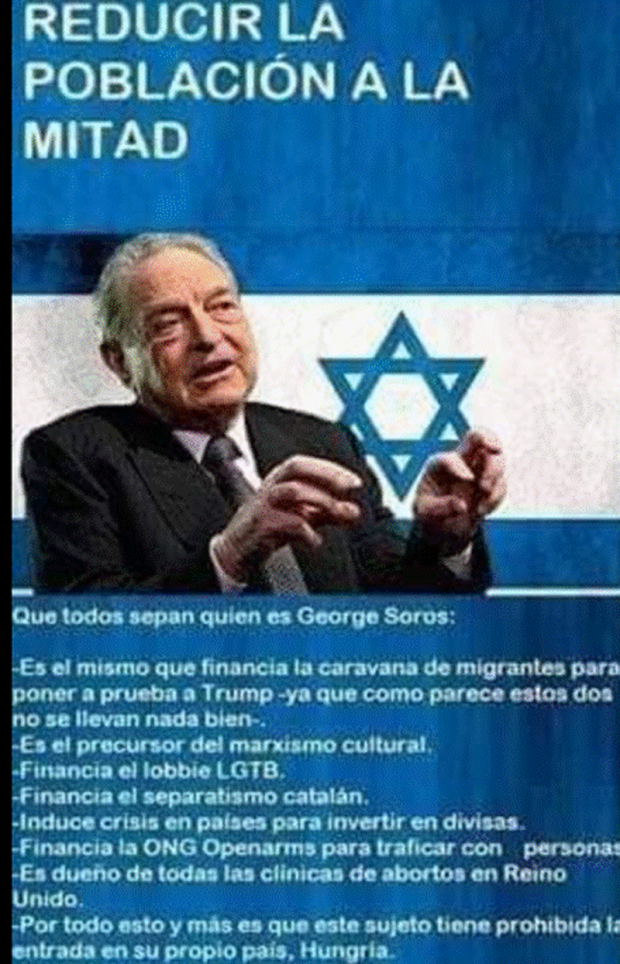 An October 2021 post attempts to expose Soros as financing immigrant caravans [in the US], LGBT causes, separatism in Catalonia, human trafficking, and abortion clinics in the UK.  For this and other reasons, the post alleges, Soros is prohibited from entering his native Hungary. 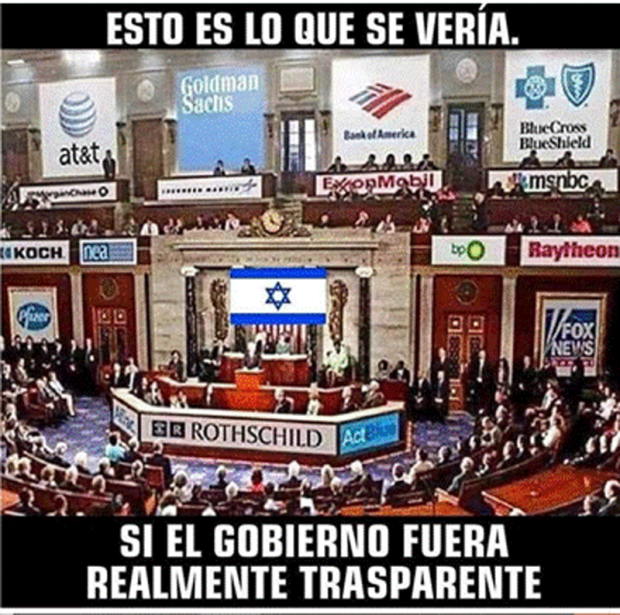 In a post from November 2021, a picture of what looks like the U.S. Congress shows an image of the Israeli flag surrounded by banners of global firms, including Rothschild & Co. The caption says, “This is what you would see if the government would actually be transparent.” The image depicts the antisemitic trope of Jewish control of finance, government, and media.

Protocols of the Learned Elders of Zion

The Protocols is a conspiratorial document that purports to be the confidential minutes of a Jewish conclave that met during the 19th century. It was produced by the Czar’s Secret Police in order to “prove” that Jews were planning world domination.

Over 122,600 people follow the Nuevo Orden Mundial (New World Order) Facebook page which features a video posted in 2019. One of the initial images in minute 0:28 shows a man with a Star of David in the background who says, “Imagine a secret society whose members meet periodically after creating a dark plan whose final objective is none other than conquering the world. If these conspirators would put in writing the steps to take to accomplish its sinister goal, what we would be reading is something very similar to the Protocols of the Elders of Zion…” The video goes on about Zionists conspiring to rule the world while set against a backdrop of puppets, insinuating that Jews are puppeteers. Another 2019 post from the same Facebook page is a 10-minute audiobook contending that the Protocols are proof of Jewish world domination, but that the Jewish press prevents further inquiry from skeptics. The narrator defines a “glossary” of terms, defining Zionism as “the global movement for the advancement and care of the political and economic interests of the Jews.” The post also features an image of the stereotypical “Happy Merchant” with the Star of David on his forehead while he devours people. 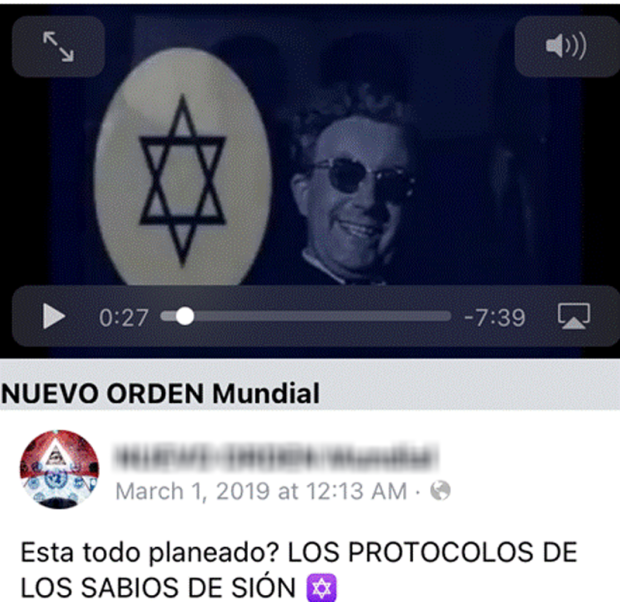 In March 2019, the “Nuevo Orden Mundial” page with a following of over 120,000 people posted a video labeled the “New World Order” claiming that the Protocols of the Learned Elders of Zion are at the center of world events and Jews are puppeteers behind media, civil society, government, religion, and the global economy. 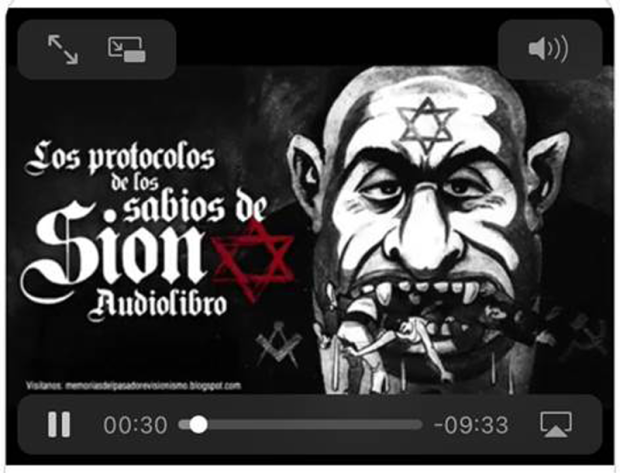 The same “Nuevo Orden Mundial '' page posted in January 2019, an audiobook of the Learned Protocols of the Elders of Zion was posted featuring a variation of the Happy Merchant with a Star of David on his forehead devouring people.

ADL expended little effort finding these examples of clearly antisemitic content on Facebook. Some pieces of content date back several years, meaning untold numbers of people have been potentially exposed to hateful myths about Jewish people. Facebook’s decision to devote the vast majority of its resources to moderating English-language content reflects its ignorance or indifference to how hate traverses city limits, state lines, and country borders. Antisemites looking to evade content moderation can translate their messages of hate into other languages for new audiences and to recruit new followers. As it stands, Facebook’s hate policies regarding antisemitism provide no real protection to Jewish people all over the world.

Enforce policies on antisemitism and hate consistently and at scale

Platform policies on their own are not sufficient; they require enforcement that is consistent across a digital social platform. ADL recommends that, especially for content such as Holocaust denial, tech companies designate sufficient resources for content moderation. Appropriate training for human moderators, greater numbers of human moderators, and expanding the development of automated technologies to commit as few mistakes as possible when enforcing policies around violative content are worthwhile investments.

Despite the demands of civil society groups, Facebook has not revealed how much of its resources and research are devoted to Spanish-language content moderation. ADL calls on Facebook to provide more transparency on its Spanish-language efforts. Given that 87% of its resourcing on combating misinformation focuses on English-language content, it is safe to assume that the platform pays scant attention to removing hateful content in Spanish. It is highly doubtful that Facebook employs enough moderators to cover the majority of global Latinx and Hispanic communities. Hundreds of millions of people speak Spanish, a language with many nuances that can be missed by those who lack fluency. Even among (and within) Latin American countries, there are many differences in uses of colloquialisms or slang and wide variances in cultural contexts. Hiring fluent Spanish speakers and employing enough people from each country where Spanish is spoken would help to ensure content moderation takes into account the intent of the user and the larger socio-political environment of the country in question.

The consequences of not having enough content moderators in a particular language can be deadly. Tens of thousands of Burmese Muslims are now missing and presumed dead.

Facebook played a role in inciting genocidal violence in Myanmar; the platform was used to spread misinformation and promote hatred of Muslims. In early 2015, Facebook only employed two Burmese-speaking moderators to cover 18 million users in the country. There was no office or staff located in Myanmar.

Facebook should seek the expertise of civil society groups representing Spanish speakers to better understand the culture, politics, and lives of Spanish-speaking users to bolster content moderation teams and policies. Expert review of content moderation training materials in Spanish can help ensure that moderators are adequately trained to recognize and address antisemitism. ADL and other Jewish organizations representing Spanish speakers could serve as experts who can review such materials.

Facebook must conduct internal research as to the prevalence of hateful Spanish-language content on its platform as well as allowing third parties to access its Application Programming Interface (API) in order to share its data and audit the platform. Its API should return publicly posted content and moderation decisions, enable this content to be retroactively searched and proactively streamed, and ensure rate limits are high enough to permit data analysis at scale. This will enable third parties to determine whether efforts by Facebook to address antisemitism actually work.