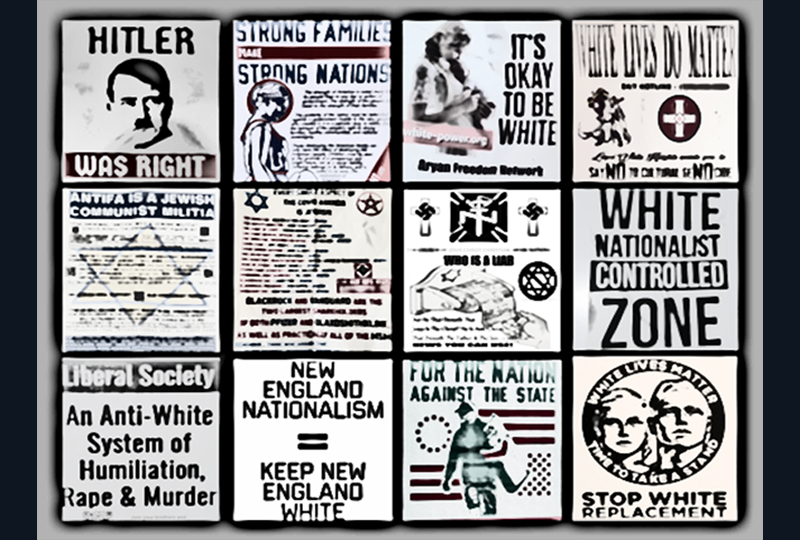 White supremacist propaganda, which allows extremist groups to disseminate hateful messages and gain attention with little risk of public exposure, has been on the rise for several years. In 2021, the overall numbers were down slightly, but paired with a 27 percent increase in antisemitic content and messaging.

Since 2017, the ADL Center on Extremism has closely tracked white supremacist propaganda incidents including the use of racist and antisemitic fliers, stickers, banners and posters, as well as the use of stenciled graffiti.

While propaganda numbers remain historically high, the 2021 data shows a five percent drop in incidents from the previous year, with a total of 4,851 cases reported, compared to 5,125 in 2020. Year over year, the number of propaganda incidents on college campuses dropped 23 percent, from 303 to 232, the lowest since ADL began tracking incidents in 2017.

The high number of antisemitic propaganda incidents have continued in 2022. In January and February, the virulently antisemitic Goyim Defense League dropped antisemitic leaflets on college campuses and across entire neighborhoods, with dozens of incidents reported in at least 15 states. 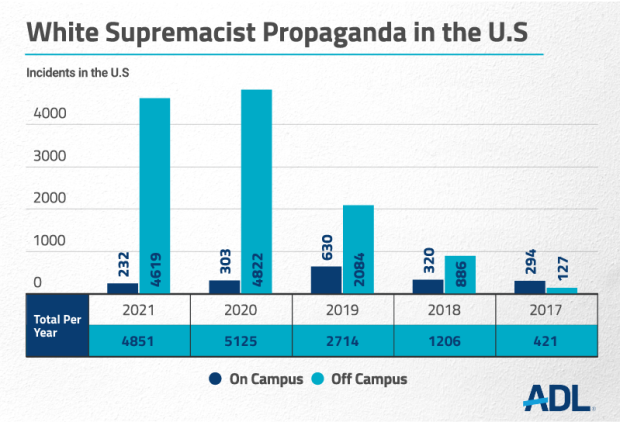 In January-December 2021, propaganda was reported  in every state except Hawaii, with the highest levels of activity (from most to least active) in Pennsylvania, Virginia, Texas, Massachusetts, Washington, Maryland and New York. ADL’s H.E.A.T. Map provides a visual representation of the propaganda efforts by geographic location and can be used to track other specific trends.

In 2021, white supremacists used propaganda to spread hate, promote themselves, attack their perceived enemies and present themselves as victims of an “anti-white” society. In some cases, they used current events to legitimize their hateful views. Shortly after the insurrection against the U.S. Capitol, white supremacists created propaganda pieces presenting January 6 insurrectionist Ashli Babbitt as a martyr for their cause. Similarly, they threw their support behind Kyle Rittenhouse, creating propaganda claiming “Kyle was right.” And, in the wake of the deadly holiday parade attack in Waukesha, Wisconsin, white supremacists leveraged the tragedy by sowing racist and antisemitic conspiracy theories on the ground and online. 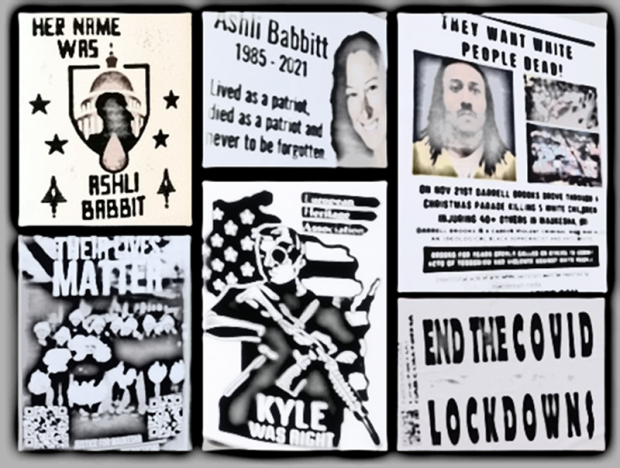 As was the case in both 2019 and 2020, Texas-based Patriot Front was responsible for the vast majority of propaganda distributions. As revealed in their communications, leaked by Unicorn Riot in January 2022, these high propaganda numbers are driven by a weekly propaganda quota which members are required to meet.

Patriot Front was behind 3,992 of the incidents in 2021–more than 82 percent of incidents nationally – distributing propaganda in every state except Hawaii and Alaska. The group was most active in Pennsylvania, Virginia, Massachusetts, Texas and Maryland, and members were responsible for 190 of the 232 (or 82 percent) of distributions on college campuses, as well as the majority (or 94 percent) of white supremacist stenciled graffiti. 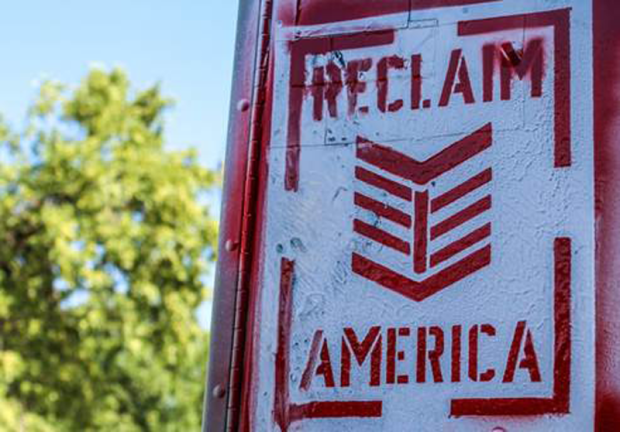 Since rebranding in October 2018, Patriot Front has avoided using traditional or explicit white supremacist language and symbols in their propaganda, opting for the more palatable red, white and blue aesthetics of “Patriot Nationalism” to promote its white supremacist ideology. Despite the effort to control their outward facing brand, the private use of antisemitic, racist and bigoted slurs - evident in their recently leaked chatrooms – show the continued presence of the group’s neo-Nazi roots.

In 2021, Patriot Front demonstrated its true colors via hate-driven campaigns and activities, including the destruction of Black Lives Matter statues and murals, stealing and burning pro-diversity and pro-LGBTQ yard signs and flags and distributing propaganda at Jewish institutions. 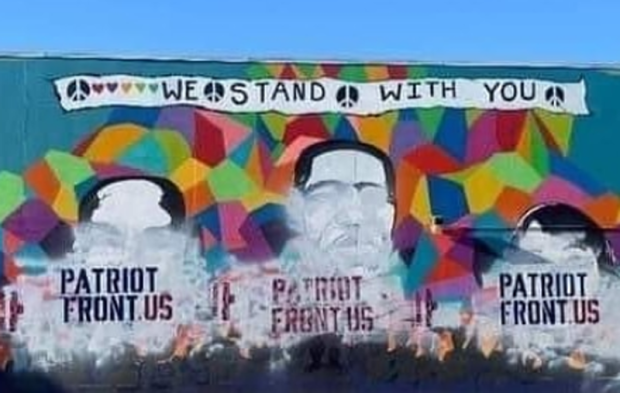 New Jersey European Heritage Association was responsible for 219 propaganda incidents in 2021, roughly five percent of the total propaganda activity nationwide, a 57 percent drop-off from their 2020 efforts. In 2021, its propaganda was recorded in 28 states but most frequently reported in New Jersey, Pennsylvania, New York and Florida.

NJEHA distributes explicitly white supremacist propaganda often focused on white victimization or targeting various groups including Jewish people, Black people, immigrants or the LGBTQ community. Some of its 2021 propaganda read, "There is a war on whites," "They hate you for being white," "Stop the Third World invasion of America," “There are only two genders,” “Black crimes matter,” “Why are Jews censoring free speech?” and “Antifa is a Jewish communist militia.” They also distributed propaganda co-opted from the Goyim Defense League, an antisemitic network in which some NJEHA members and associates participate. 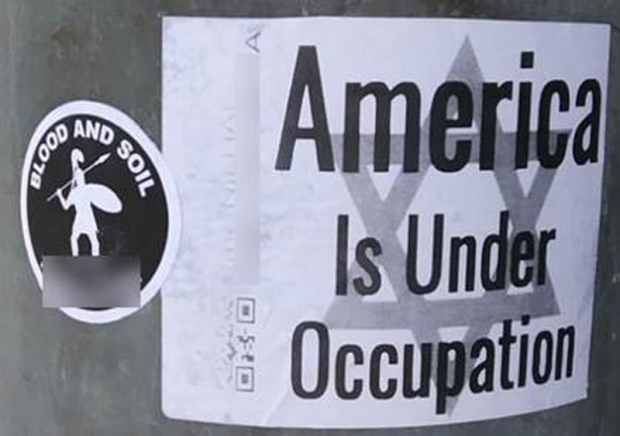 Formed as Folksfront in early 2019 and rebranded as FRM in late 2021, FRM distributes propaganda that often features crossed eiwaz runes fashioned to resemble a swastika and explicit white supremacist slogans such as “Our blood is our faith, our nation is our race” and “Blood and soil.” Some of FRM’s antisemitic propaganda features a broken Star of David and reads “Break debt slavery” or “Resist Zionism.”

In March 2021, the NSC claimed a six-state geographic area that includes New Hampshire, Massachusetts, Rhode Island, Maine, Connecticut and Vermont, and announced they would no longer have chapters outside the New England area. The majority of NSC’s 2021 propaganda distributions were in New Hampshire and Massachusetts. 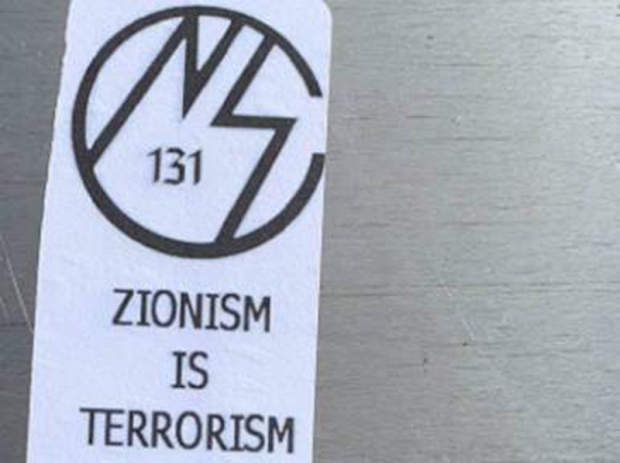 Responsible for nearly half (or 177) incidents, FRM made the vast majority of antisemitic propaganda distributions while the NJEHA was responsible for 55 incidents (or 16 percent).

White Lives Matter (WLM), a network of white supremacists who engage in “pro-white activism” on a particular day each month, were responsible for 31 (or 9 percent) of antisemitic propaganda distributions in 2021. The WLM network was responsible for 3 percent (or 140 incidents) of white supremacist propaganda distributions nationwide and were active in 23 different states. 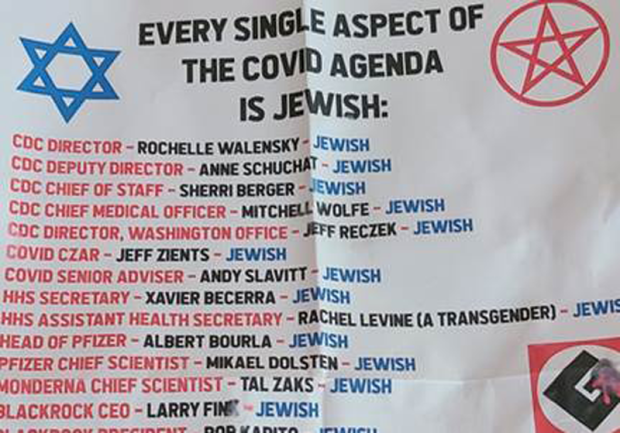 January 2021: Antisemitic propaganda from the NJEHA was found near a synagogue in Satellite Beach, Florida.

February 2021: Patriot Front propaganda was found outside the Museum of Tolerance-Beit HaShoah in Los Angeles, California.

February 2021: Antisemitic propaganda from Folksfront was found at the Arizona Jewish Historical Society in Phoenix, Arizona.

April 2021: Antisemitic propaganda from the NJEHA was found outside a Jewish Community Center in Fort Lauderdale, Florida.

April 2021: Antisemitic propaganda from Folksfront claiming “Hitler was right” was found outside a synagogue in Henderson, Nevada.

May 2021: Propaganda that included the image of a swastika and the message, “We are everywhere” was distributed at the Alaska Jewish Museum in Anchorage.

May 2021: Patriot Front propaganda was found outside a synagogue in Sharon, Massachusetts.

September 2021: Patriot Front propaganda was distributed at a synagogue in Washington D.C.

October 2021: Antisemitic propaganda from Aryan Nations that read, “Hitler was right” was attached to a menorah at a synagogue in Carmichael, California. Two months later, an individual was arrested and charged with one felony and 13 misdemeanors related to this incident.

November 2021: Propaganda from the White Lives Matter network was distributed at a synagogue in Philadelphia, Pennsylvania.

December 2021: Neo-Nazi propaganda that included the image of a swastika and read, “We are everywhere” was distributed at a synagogue in Mount Laurel, New Jersey. 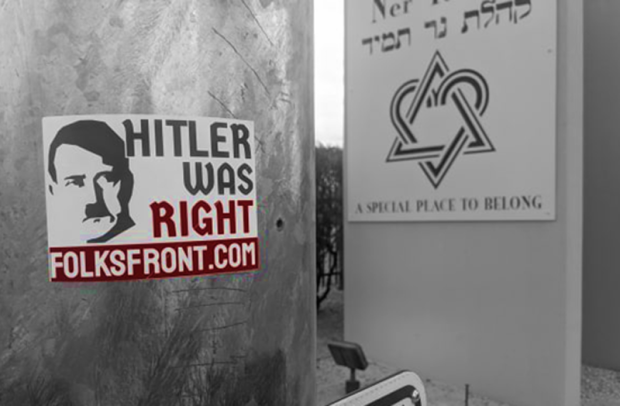 In 2021, there were 232 incidents of white supremacist propaganda distribution on college campuses, the lowest number since ADL began tracking in 2017. Though dozens of white supremacist groups distributed propaganda in 2021, there were no large campaigns focusing on targeting college campuses, potentially because of the pandemic and lack of students on campus.

Patriot Front was responsible for 190 of the 232 on campus incidents (or 82 percent). Other groups that distributed propaganda on college campuses, in much smaller numbers, included NJEHA, FRM, and White Lives Matter.

In 2021, white supremacist groups continued to use banners, many dropped over highway overpasses, to spread their ideology. ADL recorded at least 183 banner drops, a 40 percent increase from the 130 counted in 2020. Patriot Front was responsible for the majority, 121 incidents (or 66 percent), and used similar messages as previous years including “America First,” “Reclaim America” and “One nation against invasion.”  In addition to Patriot Front, banners were used by the following groups: FMR, GDL, NSC, NJEHA, Revolt Through Tradition and White Lives Matter. 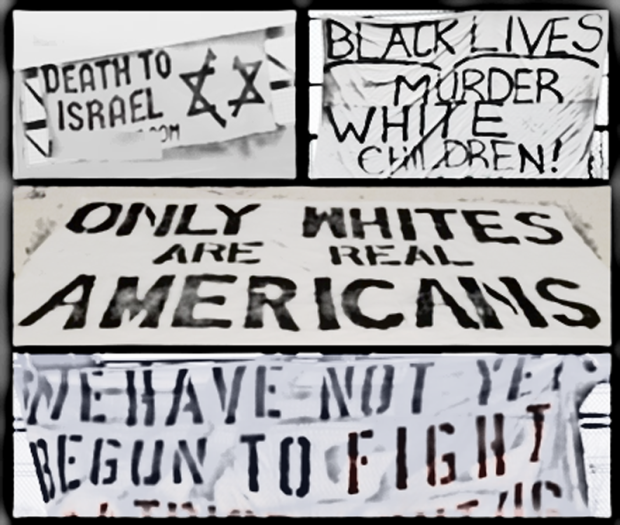 In 2021, ADL documented 108 white supremacist events, more than double the 53 events held in 2020, and the most events recorded in any of the past five years.

The surge in white supremacist events was partially due to the formation of a network of White Lives Matter activists who have organized small, monthly demonstrations around the country since April 2021. The GDL and its white supremacist supporters also bolstered event numbers by holding multiple antisemitic protests and flash demonstrations during two extended “Name the Nose” tours in Florida (May) and Texas (October).

Nearly half of the white supremacist events (49 of 108) were privately planned unannounced flash demonstrations. This strategy allows groups to promote their narratives while limiting the risk of individual exposure, negative media coverage, arrests or public backlash. Flash demonstrations are orchestrated for quick photo and video opportunities that are then used to create online content. Patriot Front held the two largest flash demonstrations in 2021 including a July event in Philadelphia and a December demonstration at the National Mall in Washington D.C.