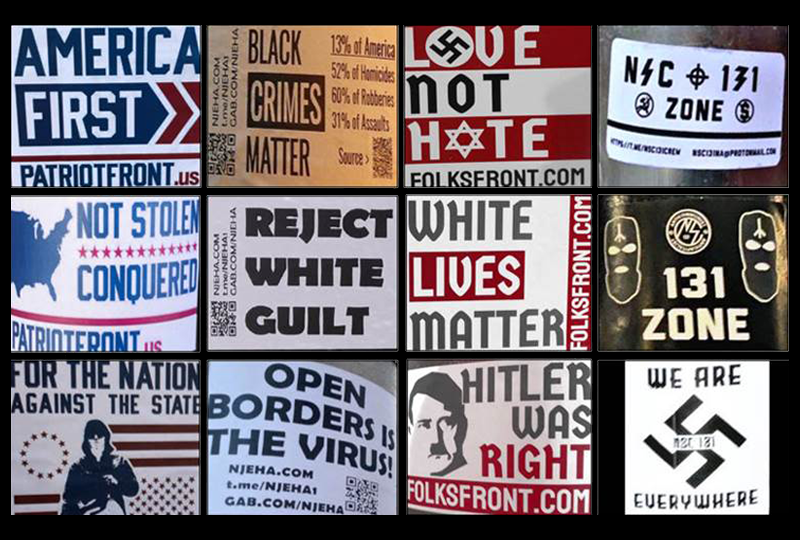 ADL’s Center on Extremism (COE) tracked a near-doubling of white supremacist propaganda efforts in 2020, which included the distribution of racist, antisemitic and anti-LGBTQ fliers, stickers, banners and posters. The 2020 data shows a huge increase of incidents from the previous year, with a total of 5,125 cases reported (averaging more than 14 incidents per day), compared to 2,724 in 2019. This is the highest number of white supremacist propaganda incidents ADL has ever recorded. The number of propaganda incidents on college campuses dropped by more than half, perhaps due to COVID restrictions.

The 2020 propaganda appeared in every state except Hawaii, with the highest levels of activity in Texas, Washington, California, New Jersey, New York, Massachusetts, Virginia and Pennsylvania. ADL’S H.E.A.T. Map provides a visual representation of the propaganda distribution efforts by geographic location and can be used to highlight other specific trends. 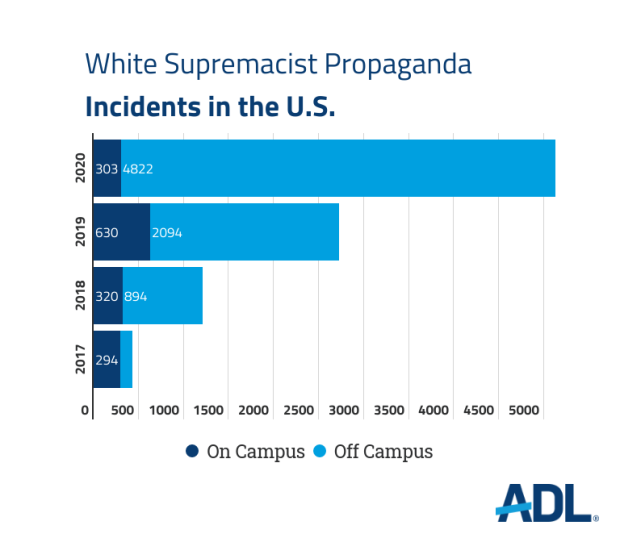 As was the case in 2019, Texas-based Patriot Front was responsible for the vast majority of propaganda distribution. The group was behind 4105 of the incidents, or 80 percent of all propaganda incidents nationally. The number of incidents perpetrated by Patriot Front in 2020 more than doubled its incident total in 2019. The group distributed propaganda in all but two states (Hawaii and Kansas) in 2020, but were most active in Texas, Washington, California, Massachusetts, New York and Virginia—nearly the exact same geographic locations the group targeted last year.

Since its formation in August 2017, Patriot Front has used its own iteration of “patriotism” to promote its white supremacist and neo-fascist ideology. In 2020, the group continued to build its “brand” by using red, white and blue colors in its propaganda and adding stenciled graffiti as a mechanism for spreading its ideology. The group continues to avoid using traditional white supremacist language and symbols in its messaging, instead using ambiguous phrases such as “America First,” “United we stand,” “Better Dead Than Red,” “Two Parties. One Tyranny,” “Reclaim America” and “Not Stolen. Conquered.” 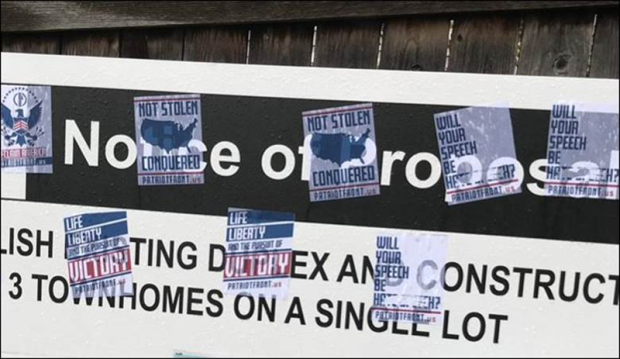 New Jersey European Heritage Association was responsible for 508 incidents in 2020, representing 10 percent of the national total – nearly double the number of incidents linked to the group in 2019. Originally focused on New Jersey, the group has expanded its activity to other states. In 2020, its propaganda was most frequently reported in New Jersey, New York, Florida and Pennsylvania, although NJEHA propaganda was spotted at least once in 23 different states. The geographic areas NJEHA targeted in 2020 are very similar to the regions in which the group posted propaganda last year.

NJEHA often distributes explicitly white supremacist propaganda with messages targeting various groups, including Jewish people, Black people and immigrants. Some of its 2020 propaganda read: “Antifa is a Jewish communist militia,” “Black Crimes Matter” and “Reject White Guilt.” References to the COVID-19 pandemic also appeared in NJEHA’s propaganda, with phrases like “Stop Corona Virus, Deport All Illegal aliens, Close the Borders, Stop Immigration Now,” “Globalism is the virus” and “(((Media))) is the virus.” The last two target Jewish people, with the word “globalism” evoking antisemitic tropes and (((___))) being an antisemitic symbol.

NJEHA propaganda is often virulently antisemitic. In addition to the antisemitic propaganda listed above, other propaganda from NJEHA reads, “Small HATS BIG problems” alongside the image of a kippah, the traditional Jewish head covering. Additional propaganda reads, “America is under occupation,” with the text overlaying a Star of David. 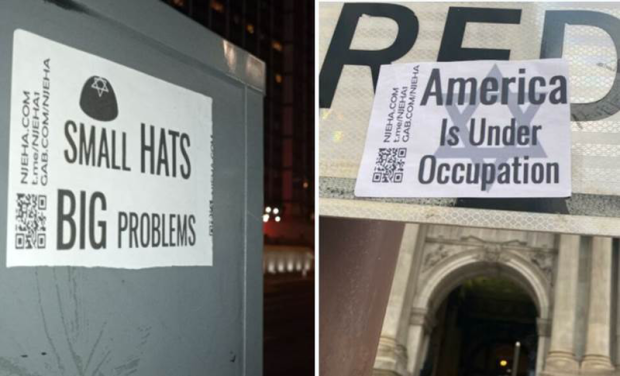 The Nationalist Social Club perpetrated the third highest number of propaganda incidents in 2020. Founded in eastern Massachusetts in December 2019, this neo-Nazi group was responsible for 102 incidents total in 2020, with incidents occurring in 18 states (Massachusetts, New Hampshire, and Texas reported the highest number of distributions). In addition to using crude graffiti to mark its territory, NSC distributed propaganda in the form of stickers and fliers that often designated a certain area as a “131 ZONE.” 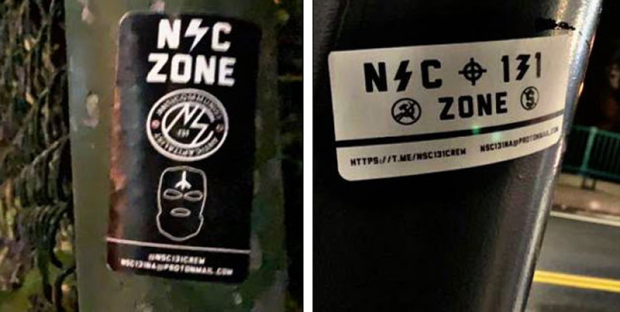 America’s Klan movement was responsible for nearly the same number of incidents in 2020 (55 incidents) as it did in 2019 (53 incidents). Though the Klan has a much longer history in the U.S. than other white supremacist groups, the Klan’s total number of incidents in 2020 only amounted to two percent of the total incidents of white supremacist propaganda distribution. As in 2019, the North Carolina-based Loyal White Knights distributed just over half of the total Klan propaganda in 2020. This year the LWK propaganda most appeared in Illinois, Maryland and Virginia.

The remaining propaganda distributions in the United States (roughly seven percent of the national total) were linked to a wide range of neo-Nazi groups, including 14 First, Folks Front, National Alliance and the now-defunct Moonkrieg division, as well as white supremacist groups such as the Hundred Handers and now-defunct American Identity Movement.

Propaganda distributed by the following groups (from left to right): 14First, National Alliance and Hundred Handers

In 2020, the ADL recorded 283 incidents that included antisemitic language or targeted Jewish institutions. This marks a 68 percent increase from the number of antisemitic propaganda distributions recorded in 2019. The top distributers of antisemitic propaganda in 2020 were NJEHA, Folks Front, Hundred Handers, NSC, 14First and the now-defunct Moonkrieg Division; NJEHA was responsible for the most at 110 incidents. This marked increase in antisemitic propaganda is primarily attributable to the fact that NJEHA (well known for its antisemitic rhetoric) more than doubled its total propaganda distributions in 2020. The formation of new neo-Nazi groups like 14First, the Nationalist Social Club and Folks Front also contributed to this increase in incident numbers. While Patriot Front’s propaganda does not include antisemitic content, the group’s literature was used to target Jewish institutions in Oklahoma, Minnesota and California.

Some examples of antisemitic propaganda incidents include:

September 2020: The NSC posted fliers outside a Texas Jewish Community Center that read: “110 and Never Again Jews have been expelled from 109 countries make America 110.”

June 2020: A bedsheet spray-painted with the message “KIKES LIE WHITES DIE 14/88” was left on the Holocaust memorial at a Jewish Community Center in Tennessee.

In 2020, there were 303 incidents of white supremacist propaganda distribution on college campuses, marking a steep decline from 630 in 2019. Though various white supremacist groups distributed propaganda consistently throughout 2020, there were no large campaigns focusing on targeting college campuses, potentially because of the pandemic and lack of students on campus.

Patriot Front was responsible for 231 of the 303 incidents (or 76 percent). Other groups that distributed propaganda on college campus, in much smaller numbers, included NJEHA, NSC, Folks Front, and Hundred Handers.

Banners and Graffiti in 2020

In 2020, white supremacist groups continued to use banners and graffiti to spread their ideology. There were at least 130 incidents of white supremacist banner drops, many of them being dropped over highway overpasses. That marks a significant increase from the number of banner drops recorded in 2019 (53). This is largely because Patriot Front was responsible for at least 98 incidents of banner drops (versus 50 in 2019), which included messages like “Better Dead Than Red” and “Reclaim America.” 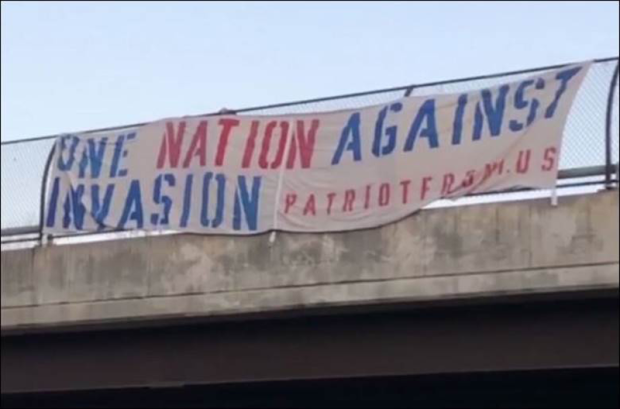 A banner hung by Patriot Front.

In late November 2020, there was an organized nationwide banner drop during which dozens of white supremacist banners were dropped from highway overpasses around the country. Many of these banners read: “No White Guilt.”

Throughout 2020, the ADL recorded banner drops by the following groups: Patriot Front, NJEHA, NSC, the Hammer, Revolt Through Tradition, Folks Front and the now-defunct American Identity Movement. ADL estimates that the actual number of banner droppings surpasses the 130 incidents recorded.

Incidents of white supremacists using vandalism to spread their propaganda also increased in 2020.  Both Patriot Front and Nationalist Social Club used graffiti frequently in 2020, but the groups’ graffiti style differed. Patriot Front encouraged vandalizers to use stencils to create a more branded, uniform image, as seen below. Nationalist Social Club’s graffiti, also below, was typically much cruder.

More than half of the white supremacist events (29 of 56) were privately planned unannounced flash demonstrations. This strategy allows groups to promote their narratives while limiting the risk of individual exposure, negative media coverage, arrests or public backlash. Flash demonstrations are orchestrated for quick photo and video opportunities that are then used to create online content. The largest white supremacist event in 2020 involved approximately 100 members of Patriot Front in a February flash demonstration at the National Mall in Washington D.C. 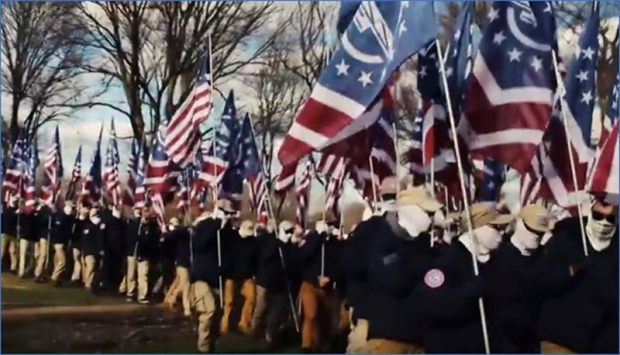 At least five unannounced white supremacist events took the form of counterprotests, which give white supremacists an opportunity to face off with their ideological foes. Throughout the year, small groups of white supremacists protested Black Lives Matter demonstrations in Massachusetts, Washington, Pennsylvania and Tennessee.

In July, eight individuals associated with the Nationalist Social Club were arrested for disorderly conduct after allegedly harassing Black Lives Matter protesters in Rogersville, Tennessee, by yelling profanities and racial slurs. Several were photographed during the protest giving Hitler salutes.

Another counterprotest took place in January when neo-Nazi Republican congressional candidate Art Jones led a small protest of his Democratic challenger, Marie Newman, during an interfaith peace forum for youth in Orland Park, Illinois (despite his protests, Jones lost the election).

White supremacists took part in at least 11 mainstream events in 2020. Nick Fuentes and his America First followers participated in at least five “Stop the Steal” rallies in support of former President Donald Trump. Patriot Front joined pro-life events in Illinois and Washington D.C., and the now defunct Legion of Saint Ambrose joined a March for Life demonstration in Knoxville, Tennessee. The NSC attended two Boston events: a “Reopen Boston” rally in May and a pro-police rally in June.