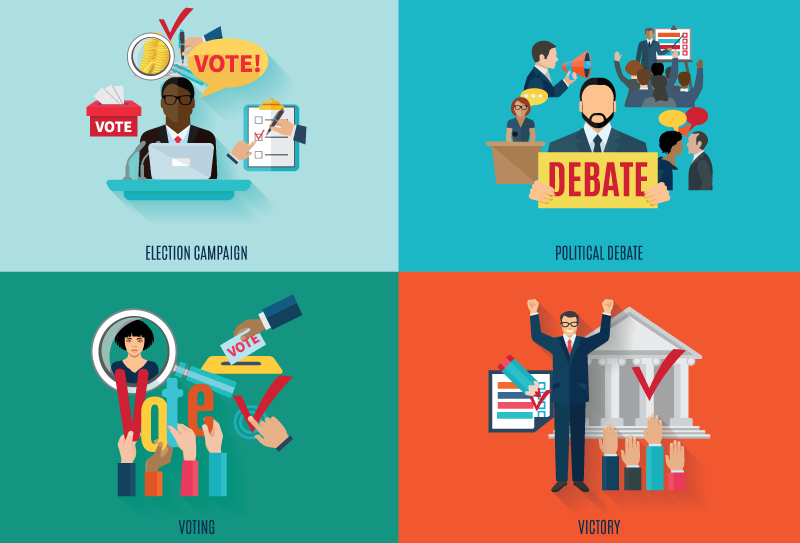 9 Ways to Teach about the Election

Campaigns and elections are ripe with opportunity to discuss government, the electoral process, civics and history as well as the myriad of specific issues that are important to the public during any particular year, whether it’s a local or presidential election. The following ideas for teaching about the election focus on social justice issues. They provide suggested strategies and activities teachers can undertake with students in order to help them analyze issues of bias, discrimination, diversity, civil rights and justice. Be sure to discuss guidelines with students in advance to establish a safe and anti-bias learning environment.

Study each of the candidates’ positions and viewpoints on social justice issues such as voting rights, immigration reform, LGBTQ rights, gender equity, school-to-prison pipeline, criminal justice reform, etc. Do this by looking at candidates’ websites, analyzing their speeches, studying their voting record, learning about their positions on local, national and international issues and reflecting upon their high profile supporters. Students can:

Learn about and reflect upon the diversity of our country and gain insight into how people may or may not vote depending on who they are and what issues are important to them. Analyze voting patterns and demographic trends based on race, religion, socioeconomic status, LGBTQ, gender, etc. Look at the demographics of each state and consider the ways in which certain voters support certain candidates. Students can:

Analyze the media coverage of the current election. Consider the extent to which certain candidates are covered more than others and how specific candidates are portrayed in the media, noticing any stereotypes and biases based on aspects of the candidates’ identities. Students can:

Watch the debates and reflect on the extent to which candidates discuss specific civil rights and social justice issues. Also, pay attention to how the candidates discuss bias, diversity, justice and inclusiveness in their debate responses. Students can:

Learn more about the history of the Voting Rights Act and modern day voting suppression and restrictions. Analyze laws in their own state as well as other states and the extent to which those laws expand or suppress people’s right to vote.  Read about what’s happening with voting in the news, including the primary election in your state and other states, and how voters may be disenfranchised. In addition, understand what each candidate is saying about voting rights, whether they think it is a problem and their specific ideas for addressing it. Students can:

Learn more about the different political parties and each of their platforms relating to civil rights and social justice issues. In addition to the Democratic and Republican parties, research some of the other parties including the Green, Working Families, and Libertarian parties. Study the different parties’ websites and list of issues in order to understand their platforms, identify what issues are important to them and gain clarity on their positions. Students can:

Listen to and observe what the candidates and their surrogates say on the campaign trail and the extent to which their rhetoric is inclusive, expansive, stereotypical or biased. Pay attention to whether candidates explicitly talk about bias and injustice and their solutions for addressing it. Also consider any biased rhetoric in their speeches and interviews as well as whether they talk about expanding or contracting rights and liberties. Students can:

Analyze campaign advertisements (TV, print, digital, etc.) that the candidates promote and those put out by Political Action Committees (PACs or Super PACs) supporting candidates. Look at how the candidate portrays him or herself, what issues are addressed and the diversity of people portrayed (or not) in the ad. Students can:

Consider the identity of the candidates (i.e. race, gender, religion, sexual orientation, etc.) and how that impacts what issues they talk about, what their positions are and in what ways certain demographic groups are drawn to them. For example, do female candidates talk about issues of interest to women and gender inequities in our society? Analyze what other factors contribute to who they are and whether certain demographic groups are missing as candidates and why. Students can: