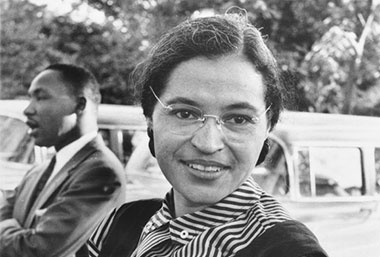 I Am Rosa Parks

The Mother of Civil Rights

Rosa Parks was an important social activist, a woman hailed by the U.S. Congress as the Mother of the Modern Day Civil Rights Movement. Rosa Parks is best known for taking a stand against racial segregation by refusing to give up her seat on a Montgomery bus on December 1, 1955. While most people know of her courageous leadership during the year-long Montgomery bus boycott, many people aren’t aware that Mrs. Parks was a community leader and activist for more than a dozen years prior to the boycott and for five decades after.

Rosa Parks was secretary of the Montgomery chapter of the NAACP, a member of the Voters’ League, and actively involved with the Highlander Folk School, an education center for workers' rights and racial equality. She wrote and spoke frequently on civil rights. In 1987, she founded the Rosa and Raymond Parks Institute for Self Development, which offers "Pathways to Freedom" tours that introduce young people to important civil rights and underground railroad sites throughout the country. From 1965 until her retirement in 1988, Rosa Parks also worked on the staff of U.S. Representative John Conyers (D-Michigan), who recalled, "You treated her with deference because she was so quiet, so serene—just a very special person...'there is only one' Rosa Parks."

When commemorating the life of this remarkable civil rights leader, educators have an opportunity to both celebrate her accomplishments and to challenge the conventional historical narrative on Rosa Parks that is a part of most students’ education, and which is embodied in the following passage from a nationally distributed children’s book:

“…Mrs. Parks was tired. She had a long, hard day…Something snapped in Mrs. Parks at that moment…Mrs. Parks didn’t look like a person to challenge the law of Montgomery. She was a quiet looking lady, wearing small steel rimmed spectacles…Much later she was asked if she had planned her protest. “No,” she answered. “I was just plain tired, and my feet hurt.”…Mrs. Parks’ patience had given way, had she but known it, at the best possible moment."

The portrayal of Rosa Parks as a poor, tired and frail woman who “snapped” is not only false; it disregards the years of strategic planning by Civil Rights Movement activists and misrepresents the way in which meaningful social change actually occurs.

Though Rosa Parks became the focal point of the Montgomery Bus Boycott, the idea for a boycott was conceived at least six years before her arrest. In 1949, Jo Ann Gibson Robinson, an English professor and head of the Women’s Political Council (WPC), was ejected from a bus for refusing to move seats and resolved to do something about bus segregation. During the ensuing years, the WPC prepared to stage a bus boycott “when the time was ripe and the people were ready.” In the months prior to Parks’ arrest, at least three other African American people had been arrested for refusing to give up their bus seats to white people. When Rosa Parks was arrested, movement leaders made a strategic decision to launch the boycott because they felt Mrs. Parks had the respect and support of her community as well as the fortitude to withstand the racism and publicity that the boycott would generate.

“To call Rosa Parks a poor, tired seamstress,” notes educator and author Herbert Kohl, “and not talk about her role as a community leader as well is to turn an organized struggle for freedom into a personal act of frustration. It is a thorough misrepresentation of the Civil Rights Movement in Montgomery, Alabama, and an insult to Mrs. Parks as well." [From Should We Burn Babar? Essays on Children's Literature and the Power of Stories by Herbert Kohl, The New Press, July 1996, p. 30–56.]

When such narratives are presented to students, it is not only historical accuracy that is at stake. Such stories frame racial inequality as historical and individual acts of unfairness that have been rectified rather than systemic forms of oppression that continue today (e.g. the resegregation of U.S. public schools). They also avoid a direct exploration of white privilege and dominance, and the responsibility that white people bear for the racial cruelties of the past as well as their present day manifestations.

Students on the receiving end of such historical accounts will not only have a limited understanding of the Civil Rights Movement; they may also fail to see racism and privilege as problems that relate directly to their lives and, therefore, may not develop the moral conviction to struggle against these forces in contemporary society.

ADL is pleased to honor the life of Rosa Parks by offering a brief biography of her life and a lesson plan for educators entitled, Rosa Parks: Sources of Information. This lesson uses the Rosa Parks story as a case study for critically evaluating sources of historical information and the consequences of misrepresentations and omissions in these sources.

ADL has also prepared a list of resources for teachers for classroom use which includes two lesson plans excerpted from the curriculum guide, Putting the Movement Back into Civil Rights Teaching (Teaching for Change/PRRAC, 2004). One lesson lesson, for elementary students, introduces the Montgomery Bus Boycott through dramatization. The other lesson, for grades 7 and up, focuses on the organizing strategies and challenges of the Montgomery Bus Boycott.