Are Boys Really That Easy? 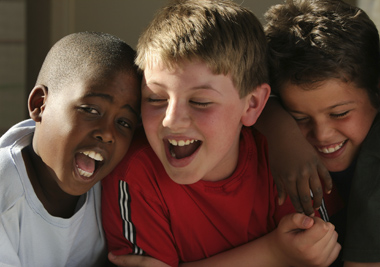 “Boys are easy and girls are hard.”

Think about when we say it. When a woman is pregnant and people ask her the inevitable “What are you having?” question and she says, “A boy,” a frequent response is, “You’re so lucky. You won’t have to deal with any girl drama or mean girls. Boys are so simple.”

We don’t stop at pregnancy. We say it throughout children’s lives.

It’s critical to realize what messages girls and boys get when adults say this. For girls, it’s “Because you’re a girl, we expect you to be gossiping backstabbers who never let go of a grudge.” For boys, the message is equally problematic because it’s saying to boys that if they have an intense emotional reaction to something like their friend betraying them or ridiculing them, they should just let it roll off their back. When we say boys are “easy,” we set up the expectation that they should not get upset and if they do there’s something wrong with them.

To state an obvious but ignored truth: boys know how to verbally humiliate each other.

This fall I am teaching a group of 4th and 5th grade boys in an after-school program and my students are challenged by these issues every day. From playing touch football during recess to walking back into class, the boys can treat each other just as cruelly as any girl. It doesn’t matter if you’re a boy or a girl, when someone humiliates you at school, you don’t want to be there. At the least, it’s hard to concentrate in class when the person who was so mean to you is sitting right next to you.

But I understand why people make these assumptions about boys. When I arrive at the gym to take them to my class, they’re yelling, chasing each other and hurling themselves into (the thankfully padded) walls. But underneath the chaos, feelings get hurt and buttons are intentionally pushed.

So I am using these common problems to give my students permission to acknowledge the pain these fleeting moments can cause and then work with them to teach them how to stop participating in putting each other down.

It’s not easy. Boys in 4th and 5th grade usually have two reactions that make all of this very challenging: The “I didn’t do it” reaction (even if you saw what they did) and “Whatever he did to me is way worse than anything I did to him” reaction.

So this is what I am focused on—creating a learning environment of inclusion, respect and dignity.

Those of us who teach social and emotional learning (SEL) of any kind can fall prey to overly ambitious goals about what’s possible to accomplish in a class session. You have to be ready to ask yourself the following, “If there is one thing I want my students to learn today, just one, what would that be and how am I going to make sure I have the best chance of accomplishing that goal?”

For better and worse, remember the students have already established relationships and some of those aren’t good.

If you’re an educator who is dropping into a class, as many SEL educators do, remember that you are coming into a group with already established dynamics between the kids. Everything we talk about it in SEL class has the potential to trigger reactions from the students individually and within the group.

Remember that there can be a lot of conflict in the way boys play.

From insulting someone when they drop a ball during recess, to demanding a redo playing four square and the other children refusing, to seeing someone cheat and get away with it, all of these conflicts can be very upsetting to boys. It’s what in their world often looks like fair and unfair. And when adults don’t respect that or yell at the boys to behave, without understanding the boys’ complex social dynamics, boys learn that you can’t depend on adults to uphold ethical standards.

Don’t expect immediate results but have faith that if you keep calm and focused, something good will happen.

As we walked to the gym to play our Alligator Swamp game, I heard one of the boys tell another student that he had “butt lice.” When I stopped “Bill,” he got incredibly upset and said, “I didn’t do anything.” But then a miracle happened. Up to this point, the other games we tried were colossal failures. The boys argued so much that the games weren’t fun. But the Alligator Swamp game worked. From the start, all the boys worked together and didn’t insult each other when they made a mistake. When one student walked away in tears because someone had cut the line, I stopped the game and asked the group how we were going to solve this problem that happens so often when they play games. And guess what…and this is what I live for as a teacher…Bill offered to let the other boy go ahead of him in line.

Find moments of connection in order to model how to treat students with dignity.

“Bill” was still waiting for his dad to pick him up from school after our session was over. That gave me the opportunity to thank him for letting the other child go ahead of him in line and stress how much he had helped the group accomplish their goal. His little ears turned red as he said, “You’re welcome.” Which then gave me the opportunity to whisper, “And that butt lice stuff…that’s not going to happen again right?” “Ok,” he said quietly. A few minutes later when Bill’s dad picked him up, I proudly told him what a great thing Bill did for the other student and how important he was to accomplishing the group’s goal.

I’m not going to lie. Teaching these boys is hard, because teaching kids is hard. But the next time you see a boy refuse to participate or walk around like he doesn’t care about anything, think about the world he has grown up in. We need more boys to grow into men who know how to express their feelings, stand up for themselves and others and feel good about doing it. And that’s only going to happen if adults see boys for the complex emotional beings that they are.

Boys in 4th and 5th grade usually have two reactions that make all of this very challenging: The “I didn’t do it” reaction (even if you saw what they did) and “Whatever he did to me is way worse than anything I did to him” reaction.